While my wife was occupied with real estate, I was sent to explore a new destination: the city of Bergamo, Lombardy, Italy. My number one task was to stay there for ten days and to find out if this city is a comfortable place to live after retirement. The second task was to practice my Italian.

I started on the second one right after landing at Orio al Serio International Airport of Bergamo. An exit. A taxi stand. All the cars were white, new, and expensive. A taxi driver. Terribly excited, I went into battle. The following dialog was in Italian.

All right. My first victory: I was understood by the Italian.

Casa Maria turned out to be just a two-room apartment in a five-storey building, but … it was beautiful. Clean and well-designed, it had everything necessary for an enjoyable stay, including a Beretta. No, there were no famous pistols and shotguns. It was an excellent air conditioning system for all the rooms simultaneously.

Giorgio, a young man who met me and showed the apartment, was demonstrating his knowledge of English while I demonstrated my Italian. Both of us got some practice and were happy. After a short tour of the apartment, I asked him where is the nearest supermarket, and got a slightly alarming answer. “There are no supermarkets nearby, but you will find several small shops over there, past the entrance to the Cittadella.”

And I headed out to look for these shops to buy Mozzarella, Gorgonzola, Parmigiano-Reggiano, Parma ham, truffle cheese, spaghetti, wine…. This set was the third (private and secret) goal of my stay in Italy and the first reason why I agreed to this trip at all. I found them, all four, but Mozzarella, Gorgonzola, Parmigiano-Reggiano, and Parma ham were not sold there.

After dinner, I went to bed with oppressive thoughts: I was going to be forced to stay in the most expensive part of the city for ten days, and this without cheeses, which were my real purpose for visiting Bergamo. However, next morning, everything changed.

While having breakfast, I asked Google Maps, “Where is the nearest supermarket?” and saw an amazing word, “Carrefour.” This is a French hypermarket chain whose shops gave us enjoyable experiences in every European country where we could find them. Just 2.7 km from Casa Maria? Thirty-nine minutes by foot? Excellent! And I hit the road.

The stroll downhill was picturesque. Medieval walls of the Upper Town of Bergamo on the right and enormous green pastures with white horses and lovely donkeys on the left. Early morning. Mild sun. Blue sky. Warm weather. Singing birds. Happiness and euphoria.

As always, Carrefour didn’t let me down. I bought two bags of wine, cheeses, spaghetti, and ham, and only at the exit, realized that I had to carry all this weight UPHILL for almost three kilometers! Again I hit the road. The way back home was a little bit different. Blazing sun. Cloudless sky. Crazy heat. I, like a loaded mule, bleakly went up the hill. In an hour and a half (note: not half an hour), I was at home completely exhausted and with the feeling that I burned as many calories as I brought with me in these two grocery bags.

Do you remember the title of this post “If you are lazy, don’t visit Bergamo?” I repeated this tour to Carrefour every two days, and after ten days, my physical form was better than ever. I even lost a little weight on this cheese diet. It seems like the citizens of the Upper Town of Bergamo don’t need gyms, and I didn’t see any sport facility there.

Of course, I didn’t go only to Carrefour. The Upper Town of Bergamo is crowned with the castle of San Vigilio. In fact, this is the foundation of the castle with a tiny viewing area on it. In clear weather, you can see Milano and some neighbouring cities, and even Switzerland from there. The way to the castle is not easy, because you have to go always uphill, but if you are lazy, it’s possible to get there by the funicular from the Down Town area. The route from Casa Maria to this castle became my favorite: very intensive workout plus beautiful views of Bergamo. 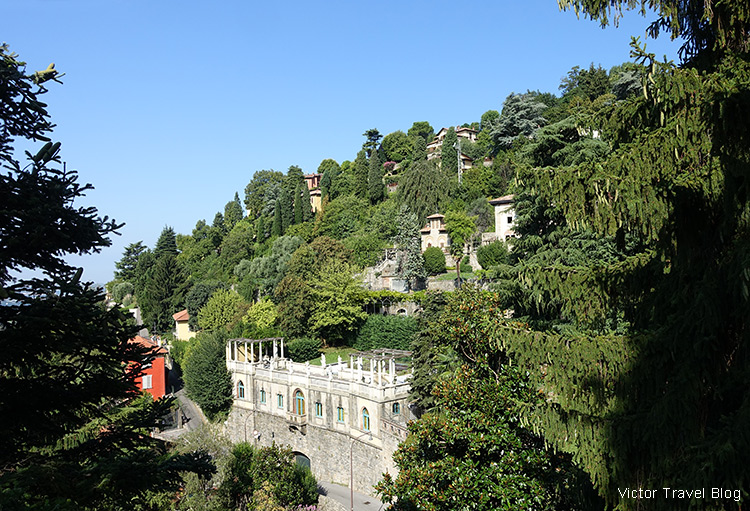 There is the main street in the old city, via Bartolomeo Colleoni. Don’t confuse it with Don Corleone. Bartolomeo Colleoni (1400-1475) was an Italian mercenary who served Venice, then Milano, then again Venice, and again Milano. In short, he killed people for money for those who pay more. Apparently, he did it so successfully that he made a bunch of money which allowed him to buy and restore the castle of Malpaga in the province of Bergamo.

Moreover, after his death, his money was used for construction of the magnificent mortuary chapel, the Cappella Colleoni, in Bergamo with his gold equestrian statue inside, and for the creation of an equestrian statue (in bronze) of himself in Venice. The last was placed near the Scuola Grande of St Mark outside the Church of SS Giovanni e Paolo. Another of his statues (of course, equestrian) is located at Lotników Square, Szczecin, Poland. I’ve no idea why. Clearly, all the employers were satisfied with his service. 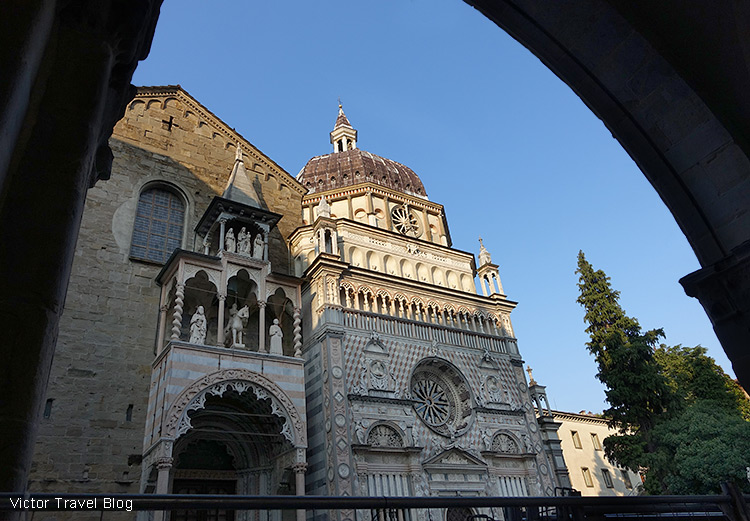 In the Basilica of Santa Maria Maggiore, notice the Baroque confessional carved by Andrea Fantoni. It’s just amazing! The filigree work. The tomb of the composer Gaetano Donizetti made by Vincenzo Vela is located next to it.

The second castle of Bergamo, Rocca di Bergamo, is a real fortress which hosts the Historical Museum of Bergamo inside and the open air military museum in its garden.

If you love art, you might know that Lorenzo Lotto, the famous Renaissance artist, lived in Bergamo for twelve years. The Venetian master created some wonderful frescos in the church of San Michele al Pozzo Bianco. The church is still there. You will find it at Via Porta Dipinta, 45. These frescoes are the most ancient in Bergamos territory. The cycle of frescoes on the left wall of the chapel (unfortunately just remnants of them) depicts the Episodes of Marys Life and was painted in 1525.

And, at last, walls. Oh, these mighty Venetian Walls of Bergamo: fourteen bastions, two platforms, 100 embrasures for cannons, two armories, four gates, underground passages and tunnels. When the Venetians were building them, they were forced to destroy more than 250 buildings. Fortunately for us, the walls never underwent any siege and remained almost intact to the present day. Their length is six kilometers. One more route for fans of hiking, jogging, and strolling, as well as robust fortifications, beautiful sunsets and magnificent views.

Turin, Piedmont, Without Rose-Colored Glasses
What to See in Rome?! Are You Serious?
What to Visit: Naples in Italy or Naples in Florida?

34 thoughts on “If You Are Lazy, Don’t Visit Bergamo, Italy!”