A Walk Along the Jugendstil Quarter: Mikhail Eisenstein—the Gaudi of Riga

It so happened that at the end of the 19th century, almost the whole of Europe watched the birth of a new architectural style—it would be called Modern. In France it is known as Art Nouveau, in Germany as Jugendstil, in Italy as Liberty, and in the USA as Tiffany.

I know whose name you are ready to call: the name of the great modernist Antoni Gaudi. It is thought that the sensational Spaniard deviated from the classical concept of architecture to a greater degree than other architects. In his beloved Barcelona, he created only twelve buildings; however, they looked so organic that they more closely resembled the work of nature than that of a human.

But Gaudi had some worthy competitors. The small city of Riga preserved the whole modernistic quarter. I am afraid there are no other places on Earth with such a concentration of amazingly beautiful buildings. Their author, Mikhail Osipovich Eisenstein, was a national of the Russian Empire and later of Germany. Thanks to his Jugendstil buildings, Riga was included in the UNESCO World Heritage List. 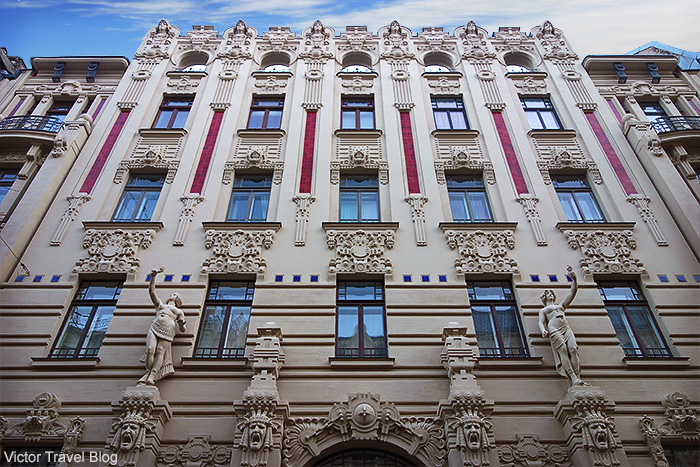 I watched many times as guests of the Latvian capital stood in amazement on their first glance at Eisenstein buildings. Then they raised their cameras and started take numerous photos trying to capture every single detail. After that, they stood, letting their eyes to travel over the, unusual for northern countries, emotional décor of the facades. I also could admire them for hours and always left with the feeling of some unsolved mystery. 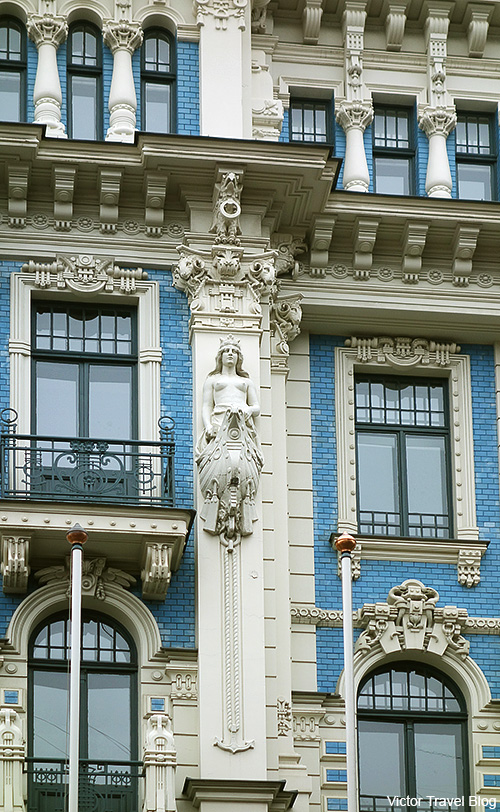 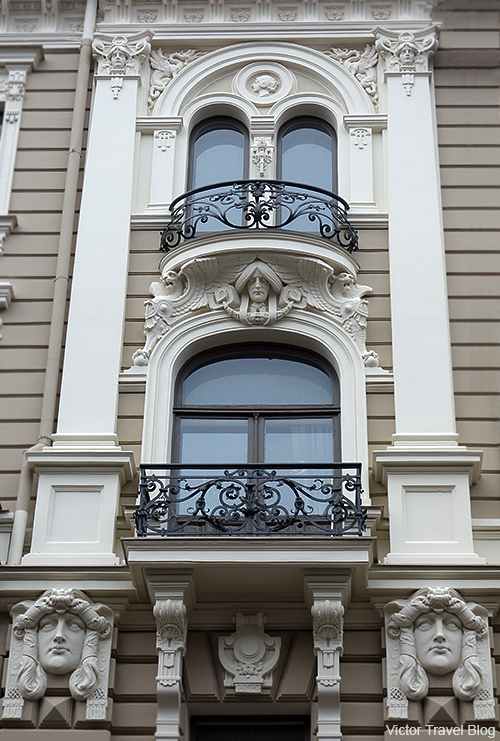 The irony of it is that Mikhail Eisenstein went down in history for his leisure-time activity. Architecture was just a hobby of the high-ranking official, who managed to serve in the rank of state councilor—which is equal to an army generalship—just for ten years. Talented people are talented in everything.

In Riga, he projected 19 houses, radically contradicting the style of the strict classicism accepted in those times.

In the mornings, in any kind of weather and any season, you find yourselves in the Eisenstein quarter of Riga together with capitally-equipped professional photographers and real fans of architecture. A little later, starting from 10 a.m., tourist buses start to bring tourists.

Splendid houses along Albert Street, which are so attractive for the tourists nowadays, have sprung up not such a long time ago by historical standards. Only 130 years ago, there was no street at all; only gardens and wastelands. Then, it was decided to turn the outskirts of Riga into an urbanized territory with high multi-storey stone houses.

A rich Riga lawyer, Lebedinskij, was one of the main developers of the new district. As a friend, he proposed to Mikhail Eisenstein to contract three houses, “Experience is a minor point. The main thing is to create facades and interiors capable of impressing the future inhabitants with their vivid beauty.” 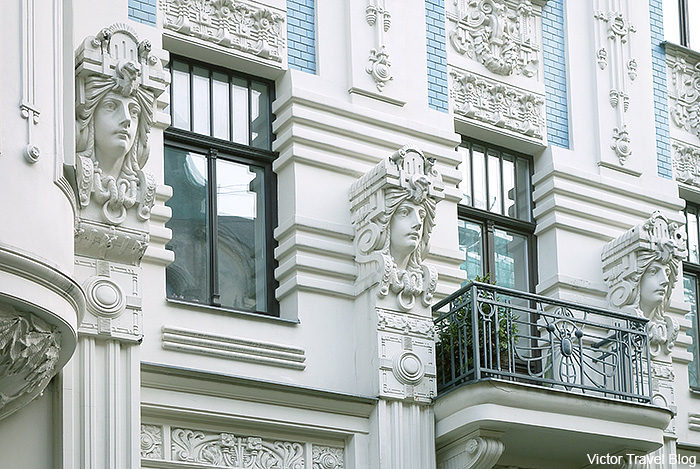 Probably, nowadays Mikhail Eisenstein might be called a perfectionist, because no matter what he was doing, he always tried to provide a faultless result. He succeeded in his career, but it was the hobby that brought him fame. Obviously, he was not only talented, but ambitious, and—above all–hardworking as well. Generally, he was a very original personality and, beyond any doubt, an artistically endowed man.

In his pursuit of something new, Eisenstein preferred the Austrian and the Bavarian variations of the Jugendstil, having surpassed his teachers in décor intensity. If in southern Europe, the distinctive feature of Art Nouveau was a décor with the use of floral elements, insects, and reptiles, the center of Jugendstil esthetics was the femme fatale, seductive, and at the same time dangerous, offering the experience of pleasure at the cost of a life.

The demonic cult of femme fatale was popular in the Bohemian theatric community. It is known for sure that the young architect was reputed to be one of the most inveterate theatergoers of Riga. He was wild about the opera and literature, and spoke perfect German and French. Many meticulous journalists tried to distinguish the faces of the popular opera divas among the feminine images decorating the facades of his buildings.

However, the rise of Eisenstein as an architect was a short one. The genial houses on Albert and Elizabetes streets were projected and built by Mikhail Eisenstein in a relatively short time span. It was the period of his rapid career progress and birth of his only son in the background of a very complicated relationship with his wife.

They both had their own love story. It is more likely, Mikhail wedded out of pique. Young Mikhail Eisenstein was in love with a daughter of the Riga moneybag, Mertens, and asked for her hand, but the rich merchant rejected him being skeptical about the opportunities of the young man.

In St. Petersburg, Mikhail’s relatives gladly supported his aspirations for family life and introduced him to a nice girl, the daughter of an influential merchant. Her name was Julia Konetskaya. Julia was in love with another young man, but the stern father rejected her choice. Instead he blessed her marriage with Mikhail Eisenstein. Thus, they became a couple without mutual love.

Later, Mikhail’s son, Sergey Eisenstein, wrote in the memoirs recalling his childhood, “With some people father dueled, with some not. I clearly remember the day when my mother hysterically ran out of the apartments to jump into the flight of steps. I also remember as father brought her back.”

Eisenstein created his best houses on Albert and Elizabetes streets in Riga during the period of these stormy relations with his wife.

The facades of his houses are full of femme masks, mysterious and sad, tender and seductive. For example, let’s take the unusual sculpture décor of house number two on Albert Street: Valkyries dancing on the mascarons. Mascarons are the masculine masks. Their faces are drawn with pain.

It is safe to say that every house of Mikhail Eisenstein is crying.

In 1909, the couple finally divorced, which returned peace and quiet to the soul of the not yet old architect, but the architectural muse no longer visited him. After Julia’s return to St. Petersburg, and because of the debunking of his architectural experiments in the press, Eisenstein left architecture and never returned to it.

Despite criticism from the local architectural community, rich citizens of Riga and international diplomats promptly occupied all the Eisenstein houses. The orders from rich property developers kept coming, but Mikhail Eisenstein had left architecture forever.

Now, it’s hard to imagine that a hundred years ago, antagonists and haters harshly criticized Eisenstein, suggesting that the buildings constructed on his projects spoil the new district and some even “disgraced” Riga. They called his buildings “raunch” and “epatage.”

Even in the beginning of the 1930s, several years after Eisenstein’s death, the passions continued to rage. Architect G. Pirang wrote about Jugendstil, “This style lasted for a short while and did not leave a proper mark in Riga. Only the piteous Albert Street has completely fallen victim to it.” 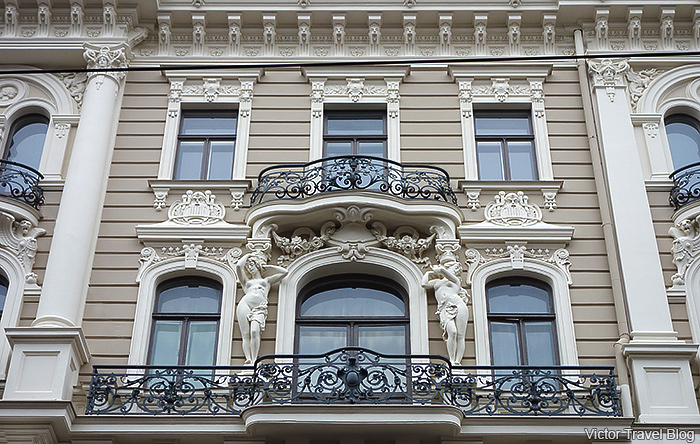 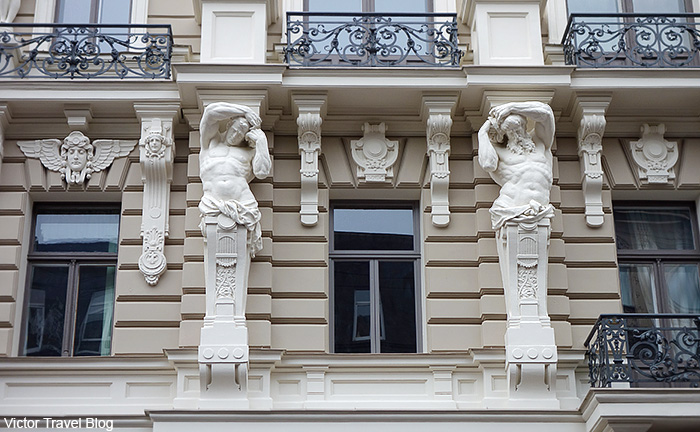 If Pirang had only known that many years later, Riga would become famous not because of the local Black Balsam, but for the treasure of Art Nouveau, and the “piteous Albert Street” would become the pride of the Latvian capital. Nowadays, the architecture of Riga is a gem of Art Nouveau style.

The First World War separated the father and the son. Eisenstein the Elder, unlike his son, strongly denied the Russian Revolution, and immigrated to Germany where he died in 1921.

He is buried in Berlin. Rows of memorial stones on that cemetery contain the names of famed Russian noble families: ministers, academics, writers, and officers. Mikhail Eisenstein’s tombstone has the original construction: it is made of bronze and has the form of a stub with stylized plants growing from it, imitating the decorative elements of the architect’s buildings in Riga.

The facades of the Jugendstil houses in Riga have windows of different shapes and sizes, decorated with carved railings and lacy balconies; wrought iron torches and cast-iron fences; strange animals on the roofs and human faces on the edges.

Every house in the Art Nouveau quarter of Riga is decorated with some original composition: clocks, spires, or lion with raised tail. The front doors are framed by the sculptures of chimeras, satires, and sphinxes. Beautiful and unusual!

The houses of Albert Street are peculiar and inimitable. I have never seen such an impressive leap of architectural imagination anywhere in Europe. These buildings could only be put on par with Hundervasserta homes in Vienna, creations of Gaudi in Barcelona and, I suppose, the House with Chimeras in Kiev. 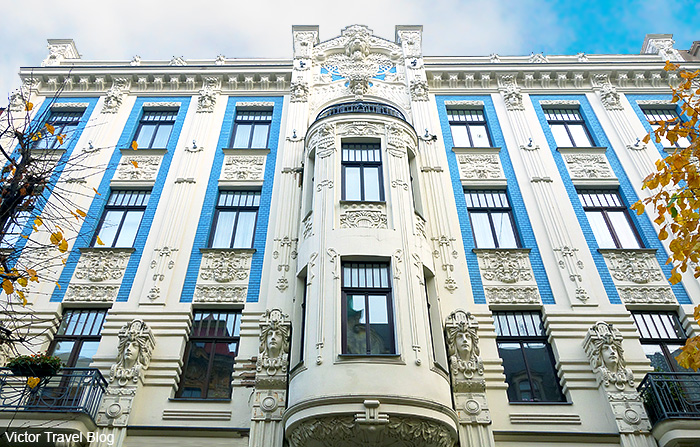 Nowadays, Albert Street is a prestigious area. Almost all the houses have been reconstructed; the valuable architectural facades were left. The inner premises are modernized: from the separation walls to the underground parking area, bathroom fixtures, and elevators.

The cost of one square meter here starts from 3-6 thousand Euros, and local guides often emphasize that such a price does not deter the customers at all. Apartments in this district of Riga are rarely offered for sale. 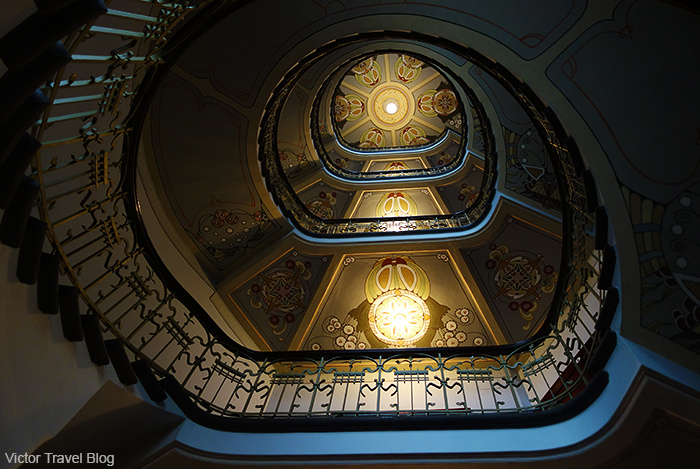 The flight of steps in the Art Nouvea Museum.

During the period from 1897 until 1911, Mikhail Eisenstein designed 19 buildings. They are all sensational and acknowledged to be architectural masterpieces! Six of them are presented on Albert Street: three of them were built by order of Lebedinskij, among them Eisenstein’s own house in Riga.

Here I would like to present the whole list of Mikhail Eisenstein’s works in Riga with their addresses and the constructional date:

Pay attention to the dates: Mikhail Eisenstein designed his first house at the age of 29, deliberately to gain architectural experience, and suddenly, within only five years, from 1901 till 1906, produced his best houses in an incredible creative surge.

If you are a fan of modern architecture, Barcelona and Riga must be your next destinations. 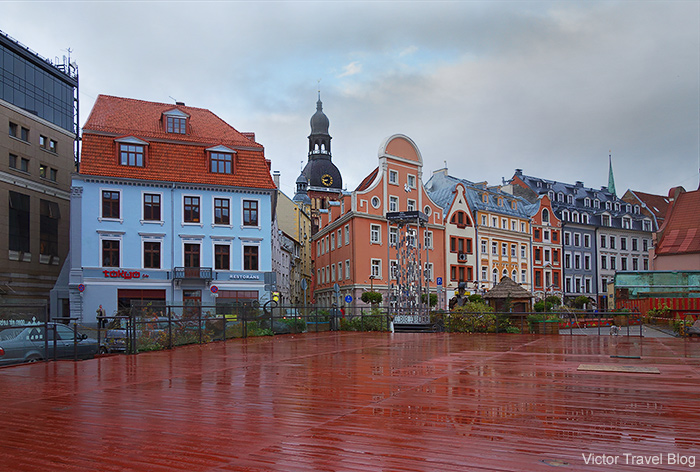 The old town of Riga

Weekend in Riga: Hundred-Percent Europe for a Very Reasonable Price

48 Responses to “A Walk Along the Jugendstil Quarter: Mikhail Eisenstein—the Gaudi of Riga”