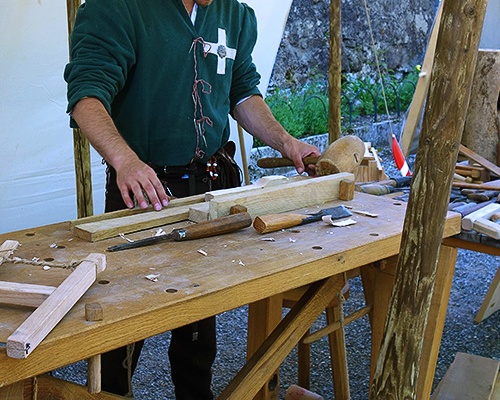 We wanted to visit Switzerland long ago, but we didn’t know what we could find there that was interesting. However, after a wonderful time at the Venice Carnival, the wish to see other medieval festivals in Europe suggested a solution. St. John’s Day in Gruyères, Switzerland, is held in June and coincides with the summer solstice.

For our distant ancestors in pre-Christian times, the summer solstice was the main celebration of the year. Seems, it was time for us now to follow tradition and jump over a ritual bonfire hand in hand.

What facts do you know about Switzerland, and what associations are connected with this country in your mind? For me, as strange as it might sound, Switzerland is less connected with Swiss watches or Swiss chocolate, but more with a general well-being, reliable Swiss banks, cheese, mountains, and castles.

Swiss Gruyères had all that is attractive for us. This small district is located in the upper valley of the Saane River, in the Canton of Fribourg, at the foot of the majestic Gruyères Castle. You can ride by bicycle around the mountains, explore the Swiss Alps via tourist paths, sit on your balcony, and watch deer or sheep grazing at the bottom. Whatever you do, the sound of ringing bells on the famous Swiss cows will accompany you everywhere.

Gruyères is also known as the birthplace of Gruyere cheese. Here, every café offers you Swiss fondue, raclette, and wonderful Gruyère quiche. Another famous place in Switzerland is the chocolate factory Maison Cailler where first milk chocolate was made 140 years ago. It is located five minutes’ ride from Gruyères.

Our trip from the Geneva airport to Gruyères took one hour and we were not tired. Five days left until St. John’s Festival, and we headed for the Cailler chocolate factory.

Maison Cailler is located near Gruyères, in the town of Brock. Excursions start every five minutes and are held in English, German, Spanish, and French. The most interesting experience awaits you at the end: a degustation hall. Where else can you eat a lot of luxury brand chocolate for free? Those sweets jump into your mouth themselves. I did not want to eat them, but still tried everyone. On the first day of our holidays in Switzerland, we bought sweet presents for all our relatives and friends.

You can read our blog post about Swiss cheese and Swiss chocolate.

At last, the meeting with the next castle in our life. The Castle of Gruyères is one of the most famous Swiss castles. Did you ever hear about Swiss castles without mention of Château de Chillon (thank you, Lord Byron)? Recently, I found out that relatively small Switzerland has 1054 castles.

For tourists, the most interesting things in Gruyères are the medieval castle and cheese. Later, we would pay tribute to the favorite delicacy of gourmets all over the world—semisolid cheese with a nutty flavor, Gruyere AOP Cheese—by visiting the cheese factory La Maison du Gruyère. In the meantime, we were most interested in the well-preserved medieval castle, the place of the upcoming St. John’s Day celebration. Four days left until the summer solstice.

According to legend, the founder of Gruyères Castle was Gruerius, the chief of the sixteenth Vandal legion, who came from the North in search of fertile lands. People say, one day he saw a wonderful sunny valley surrounded by high mountains and knew that he had achieved his goal. The Vandal ordered the fortress to be built at this place. It was the future Gruyères Castle or Schloss Gruyere.

When the fortress was finished, a white crane sat down on the shoulder of the dux. “This is a good sign,” said Gruerius. “From now, this bird will be in my coat of arms.”

436 years passed, but nothing changed. A silver crane on a red background still decorates the coat of arms of Swiss Gruyères. We cannot be sure if the counts of Gruyères were the descendants of the famous dux of the Vandals, but the Gruyères Castle, dated from the 11th-13th century, is the jewel and pride of Switzerland.

It had a glorious war history, changed owners, did not surrender to enemies, and posed for artists a million times. The castle’s interior is well preserved, and going from one hall to another, you move through eight centuries of history.

In the evening of the summer solstice, we sat on the open terrace of the Hotel de Ville admiring the only street of Gruyères. We ordered the famous cheese fondue and white Swiss wine, and were spectators when people in medieval costumes—traders, lace makers, warriors, minstrels—started to appear on the street.

A company of “medieval” young men and women sat at a nearby table and for the first time, we regretted that we were too lazy to bring our historic costumes made for the Venice Carnival with us. Apparently, tomorrow there would be a real celebration.

At six o’clock in the morning, insistent ringing of the church bells announced the beginning of St. John’s Medieval Festival. Summer solstice rituals were practiced by Celts, ancient Germans, Scandinavians, and Russians. People say an enormous number of people gather at the British Stonehenge to celebrate the sundown of this special day.

Ancient people believed that the sun had power over all life on Earth. The meaning of the summer solstice rituals is in the greeting of the union of sun and Earth. People danced, organized torchlight processions, and kindled huge bonfires. By nightfall, enamored, hand in hand, they jumped over the fire three times that their union would be happy and rich, with many children. Our bonfire in Gruyères also was waiting for its time.

For one day, history stepped back several centuries to demonstrate to us the lifestyle of our distant ancestors. We visited the Gruyères Castle yesterday, but the next day, it was completely different.

Servants scurried around the yard of the castle, all the doors were guarded by soldiers, a smith worked in the yard, and a real potter turned his wheel by foot, growing a pot right before our eyes. Nearby, a tanner and an armorer praised their goods, a medicaster helped to select herbs and honey, and a pretty young washerwoman washed linen. A dinner was cooked in a huge pot on the fire right in the middle of the yard. In the castle’s kitchen, an old oven which had slept the whole year was heated to make bread.

For the first half hour in this atmosphere, I felt something like a split personality, but gradually, both realities intertwined, and people in medieval and modern clothes have mixed. After an hour, I stopped noticing modernity at all.

There were no actors here. People in medieval costumes were here not for the entertainment of the public. A couple of hundred people came from all Europe to live here for two days like their ancestors lived. There were infants, adolescents, elderly… This is a wonderful community. They returned Gruyères to forgotten times. 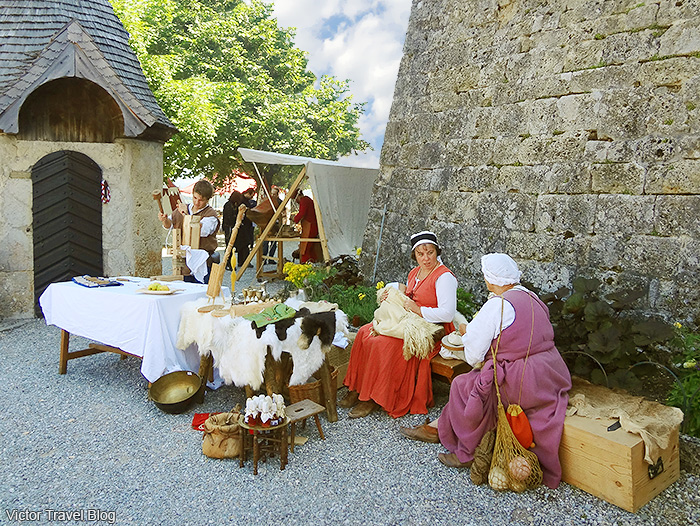 We were offered to try a festive wine, and we met with a very well-dressed “medieval lord.” His name was Dominique.

“Why do you think we do all this?” he asked.

“You like a medieval lifestyle and try to return to those times.”

“Exactly. I come here every year with my wife and two daughters, and with every visit we like our Gruyères’ festival more and more.”

We had an unforgettable day in the era which is close to us. Everybody was tired, but no one went away. The denouement was still ahead. Around 8.00 p.m., with the sounds of medieval musical instruments, people in medieval costumes flooded the square in front of the old chapel of Gruyères.

Medieval dances. Now we know for sure how men chose brides during the summer solstice celebration. Nearly every dance provided for a change of partners, and every guy managed to dance with all the girls of the village. Of course, by nightfall, you knew exactly who was your partner and whom you would call to jump over a ritual fire. “We will go through fire and water together.”

Then the ritual bonfire was lit, and dances continued until it was extinguished. Like other viewers, we kept watching the holiday wondering, does the tradition of jumping over the fire have a place in Switzerland? Of course, I saw Dominique with his family and could have asked him, but we decided just to wait.

We thought to jump over the dying fire first to show an example for all, but hesitated. Then a young couple came up to the bonfire. They did not jump. They just threw something into it and kissed as if making a wish. After these, young daredevils began to jump over the fire one by one.

Gruyères slept late that night and woke up next morning still in the medieval guise. Just after lunch of the second day, the fairytale began to dissipate. By suppertime, the good old medieval times said goodbye to their city and castle until the next year.