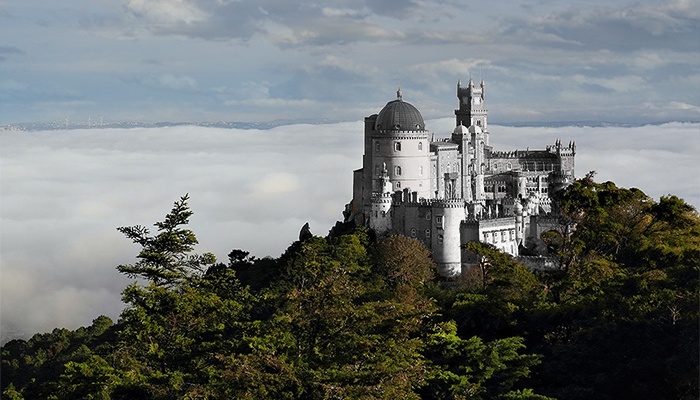 The best time for visiting the mystical town of Sintra in Portugal is June, because:

The worst time for visiting the mystical town of Sintra in Portugal is January, because:

Sure enough, we chose January. 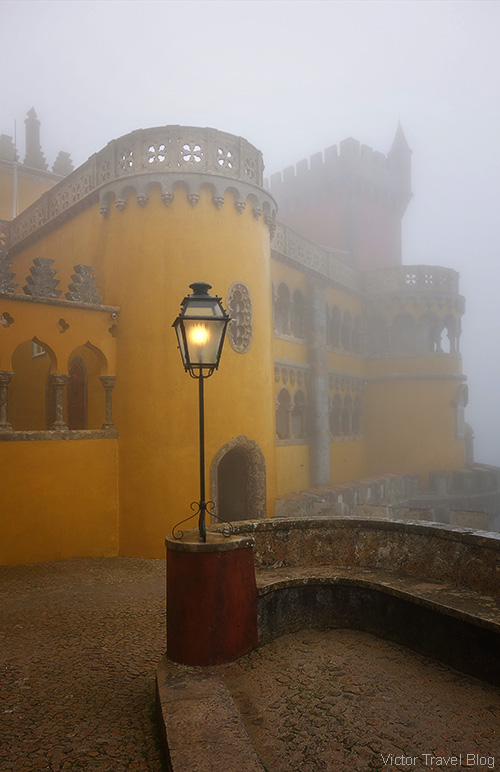 The famous Laurence Hotel of Sintra, once visited by Lord Byron, was empty, and every evening, somebody from the staff asked us, at what time we should like to have our breakfast. Needless to say, we were able to order an individual set of products. Having noticed that after a hard tourist day (all of them were rainy) I liked to sit with my tablet PC near the chimney in the lobby, the staff kindled the fire every evening for the only guest of the hotel and brought me a tray with hot tea and pastries. I felt like Lord Byron.

As I mentioned above, all the days of our stay in Sintra had one thing in common: the rain. The day of our photo session in the Pena Palace also was very suitable for taking completely “unusual” photographs. It was foggy, rainy, and windy. The fog was so thick that the neighboring Moorish fortress was invisible. 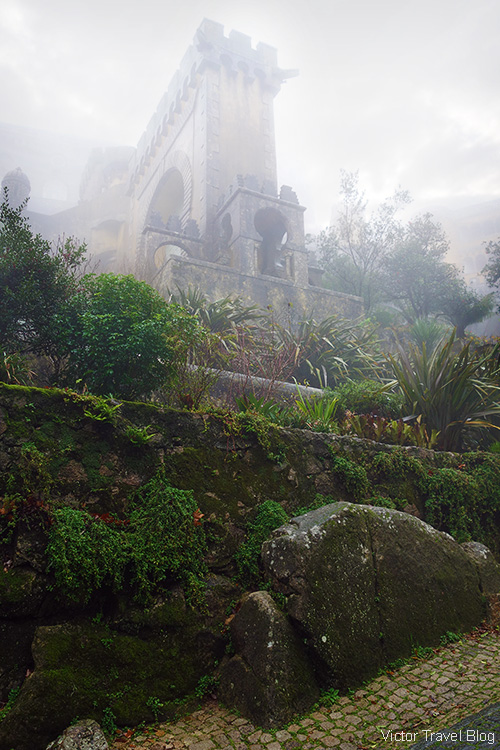 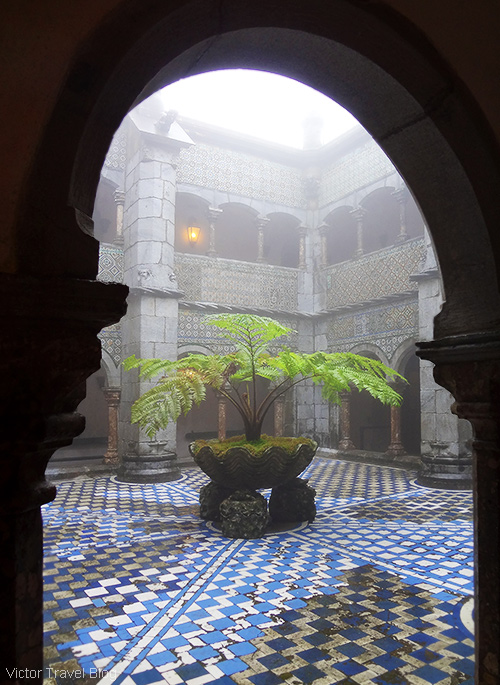 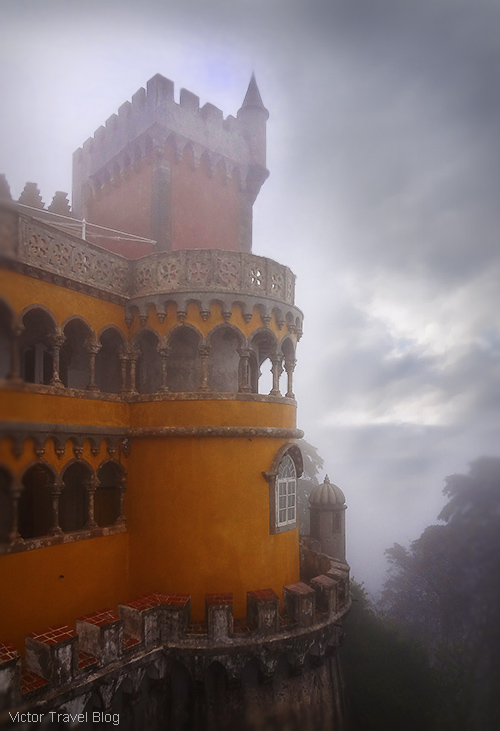 In Sintra, King Ferdinand II decided to build a castle which would be no worse than the Neuschwanstein castle (for which Bavarian King Ludwig was killed), and hired an experienced architect…. Stop. The strangest thing about the Pena Palace is the fact that it was built by a dilettante. Different sources call Lieutenant-General and mining engineer Baron Wilhelm Ludwig von Eschwege an “amateur architect.” In other words, he could not erect buildings, but he always wanted to do it.

After studying in Germany, Baron von Eschwege went to Portugal to work in the mining industry. One time, he even took part in military operations against Napoleon Bonaparte. Then, at the invitation of the Portuguese royal court, he left Portugal for Brazil to establish the local mining industry, and achieved considerable success in it. On returning to Portugal, he received a very unusual proposal: to design and erect the summer royal residence in Sintra near Lisbon. Why? Apparently, Baron von Eschwege was close to the royal family, so we can try to reconstruct the sequence of events.

At a royal dinner, after one or two glasses of port wine, the king said, “Dear Baron, why don’t you build a summer residence for our family in the mountains of Sintra? It could be a real Teutonic castle.”

“Why not?” said the Baron, and went to work on the project. After a while, during one of the royal dinners, he presented plans for the project of the new residence. It was a powerful, brutal, and impregnable Teutonic castle on top of a rock. It had the stern watchtowers with loopholes and was surrounded by high, thick walls. The Baron was very proud of his creation. To build such a castle was his lifetime dream.

The king liked the project; however, after a glass or two of port wine, he said, “Dear Baron, why not decorate our castle with beautiful and mystical window similar to the famous Manueline window in the Convent of the Order of Christ in Tomar?”

“Why not?” said the Baron, and went to Tomar to look at the famous window. After a while, he drew a similar window for his Teutonic castle and showed the sketch to the king during one of the royal dinners.

The king was happy, but the queen (after one or two glasses of port wine, of course) said, “Dear Baron, why not add some Moorish motifs to the decoration of our castle such as those in Cordoba in Spain, and paint the whole residence in different colors?”

“Of course, Your Majesty.” The Baron bowed and went to Spain.

We don’t know how many such dinners had “architects,” but as a result we got the most eclectic and unusual castle in the world—the Pena National Palace in Sintra. When the Pena Palace was completed, people called it kitsch, a little later—high kitsch, and at last—something so kitschy that it was higher than any kitsch. 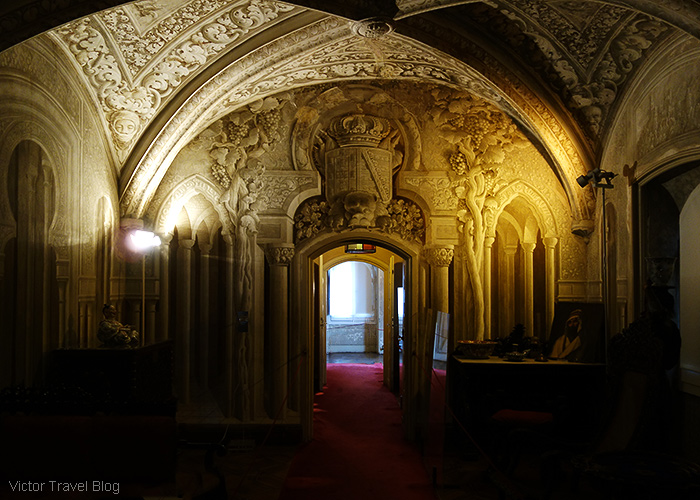 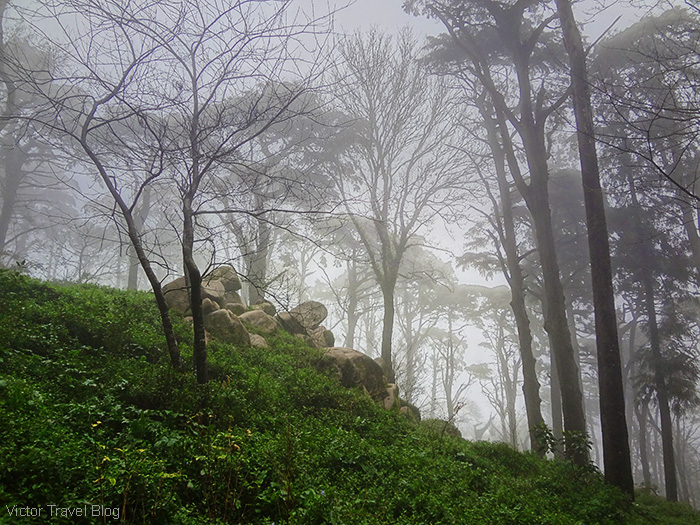 Can I repeat that Baron von Eschwege was a dilettante in architecture? No! The Pena National Palace was only one building in his life, but if it has already stood for more than 150 years, is a UNESCO World Heritage Site, and is one of the Seven Wonders of Portugal, we can safely call its author a real professional.

At the end of the 20th century, the Pena Palace stood without paint and was gray as a real Teutonic castle, but later the original coloring was restored. I didn’t find the photographs with the “gray” look of the palace, so I tried to imagine it with the help of PhotoShop. You can compare with the first image of this post.

Convent of the Capuchos: a Souvenir in the Forest
Castles of the Knights Templar in Portugal’s History
Quinta da Regaleira as My Internal World in Sintra