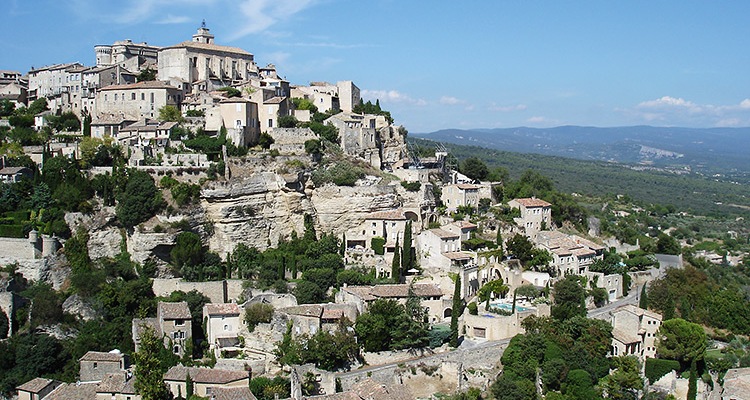 Our world is full of attractive places, and some of them are definitely worth visiting again and again. The famous Provence style attracts tourists like a magnet. It also attracted us, and we have found ourselves in the south of France to meet with authentic Provence, and finally to feast our eyes on lavender. 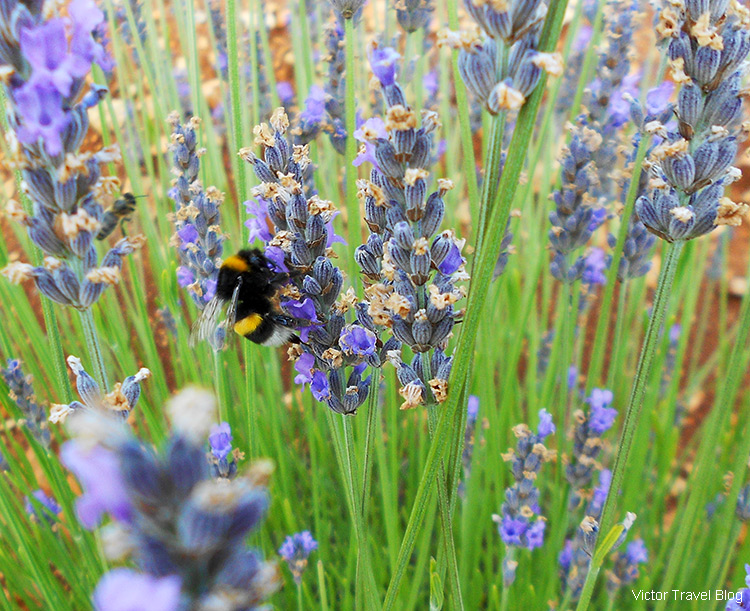 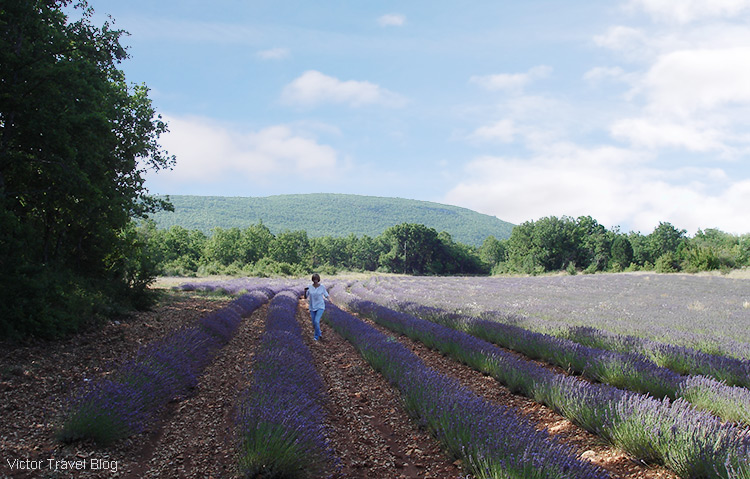 It’s easy to dream standing in the middle of a lavender field, inhaling the aroma of Provence. I dreamed that someday our plans for the Venice Carnival, magical Chinese Liani, and unreachable Machu Picchu would come true. There are many picturesque towns on the map of Provence. Seeking a fragrant miracle, French lavender, my wife and I drove many miles and saw a lot of interesting places. Let us show you just some of those tiny towns: Gordes, Roussillon, Oppède-le-Vieux, and Lacoste. Welcome to authentic Provence.

I like old houses, therefore I couldn’t help but enter an abandoned house near the town of Sault. Such places are magical. Even in this half ruined house, you feel the famous Provence style. The sweet, old country house: a grapevine entangles the sunny terrace; creaky wooden floor is still unbroken; pigeons cozily accommodated under the old roof; and all that among lavender fields. Is it not full of charm?

The next house was completely different. It was formerly owned by Donatien Alphonse François de Sade, the well-known Marquis de Sade. Although he was notorious, some of his writings are considered to be classical examples of French literature. His life wasn’t easy. He was in a loveless marriage, and became a proponent of the idea of absolute individual freedom not limited by morality, religion, or law. As a result, he spent almost half his life in prison where he wrote most of his novels. “Kill me or accept me as I am, because I will not change,” he wrote to his wife in 1783.

The monument to the Marquis de Sade “Captive of his own passions” was created by Russian sculptor Alexander Bourganov in 2008 at the request of the current owner of Lacoste castle, French fashion designer Pierre Cardin. The castle is almost completely destroyed, but the village of Lacoste is truly admirable. Its stone streets are a real illustration of authenticity of Provence. 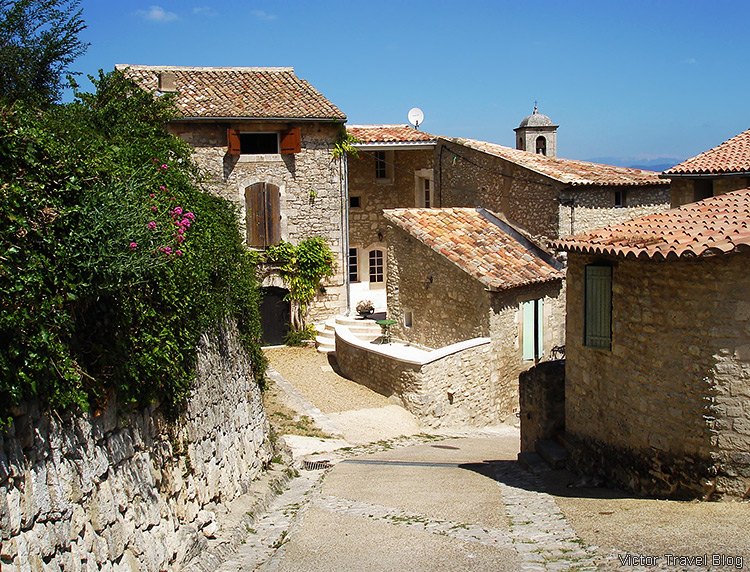 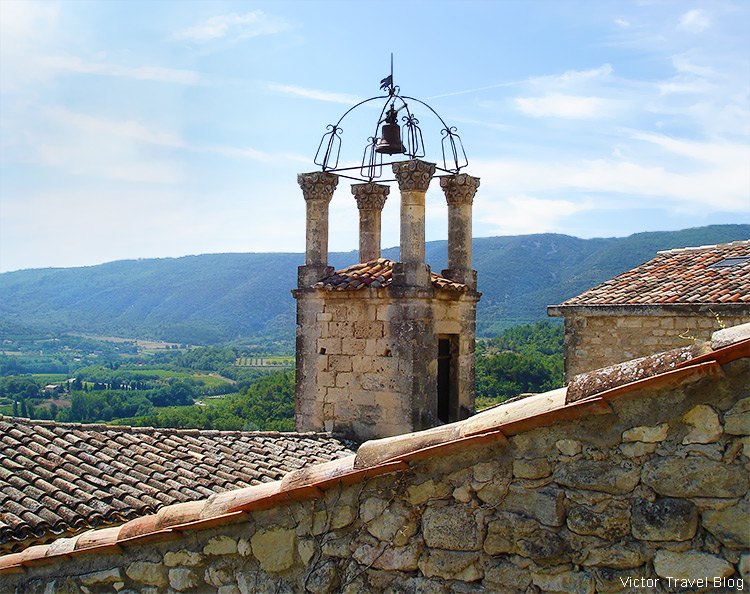 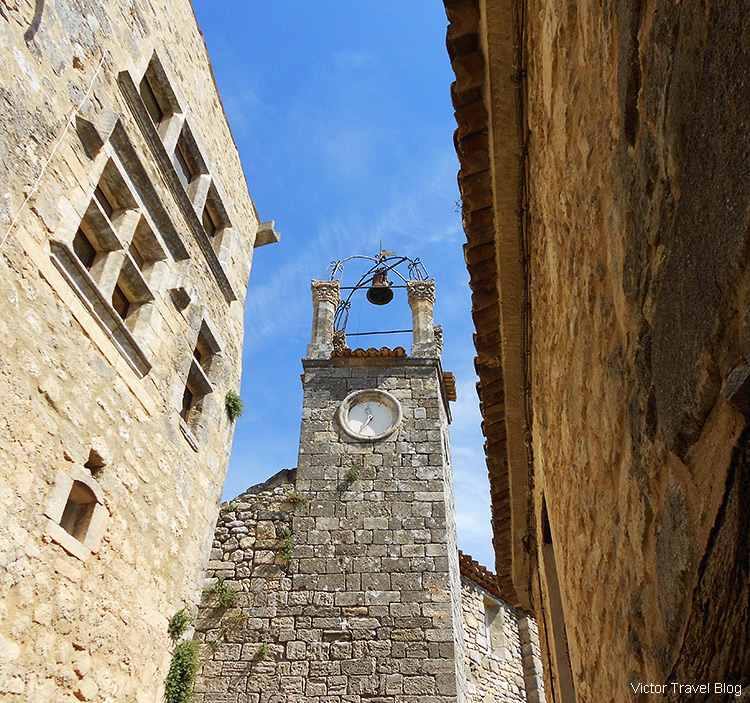 Thanks to the film, “A Good Year,” based on the book of the same name by Peter Mayle (British author known for his series of books about life in Provence), Gordes gained even more popularity among tourists. You will easily find its postcard view in Instagram or Facebook. French writers prefer Gordes for vacation. Every single house there is filled with Provence authenticity. Even its church doesn’t look like a typical solemn Catholic cathedral. It is light and shiny. We also chose this town to stay in, but with the intention of seeing other, less famous, towns of Provence. 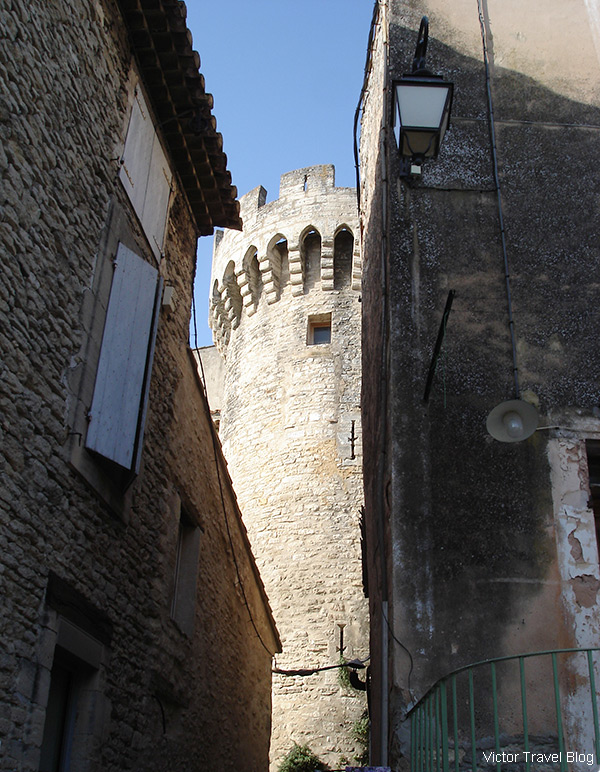 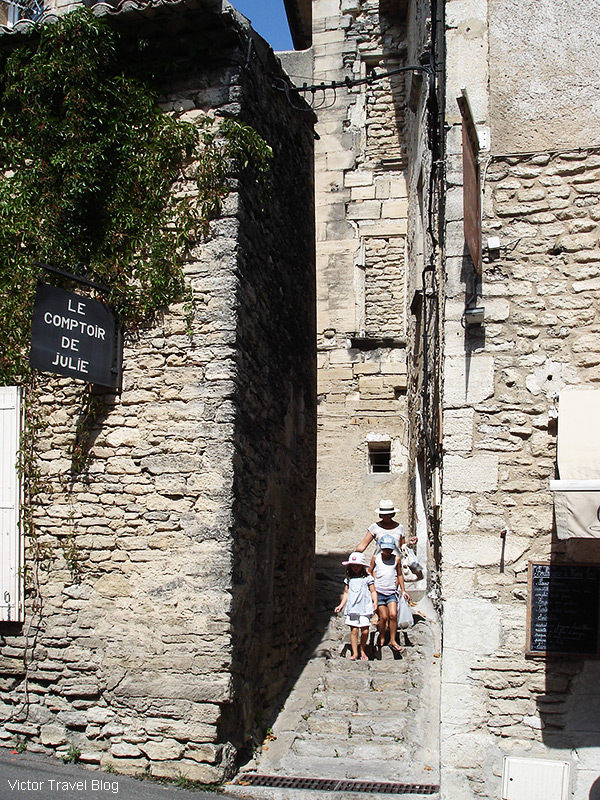 Not so far from Gordes, you will find another Provence town of a completely different style: bright orange Roussillon. Here, they have produced ochre for ages, which adds such an amazing brilliance to the town.

Can a former ochre quarry located deep in a French province be interesting for anyone? Apparently, it can! In summer, giant buses deliver there hundreds of tourists who admire picturesque hills, and stroll along streets that are covered with red dust. Yes, it is impressive, but don’t come there in summer and don’t use a bus. It’s better to explore Provence by car, for example, a rented one.

Roussillon, the Vaucluse department, is a town famous for its colored houses. Local quarries give seventeen gradations of ochre, from yellow to red. Roussillon has profited from ochre since the times of the Roman Empire. By the way, the famous frescoes of Pompeii and Herculaneum were created with the help of dyes from Provence. 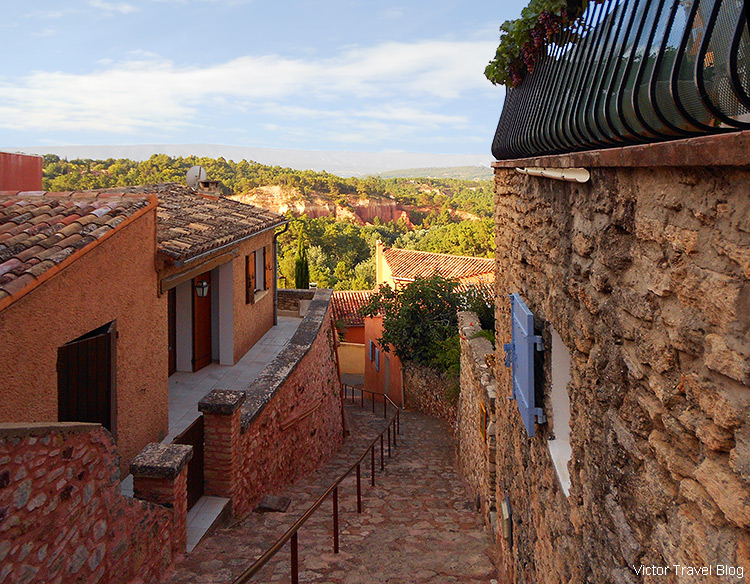 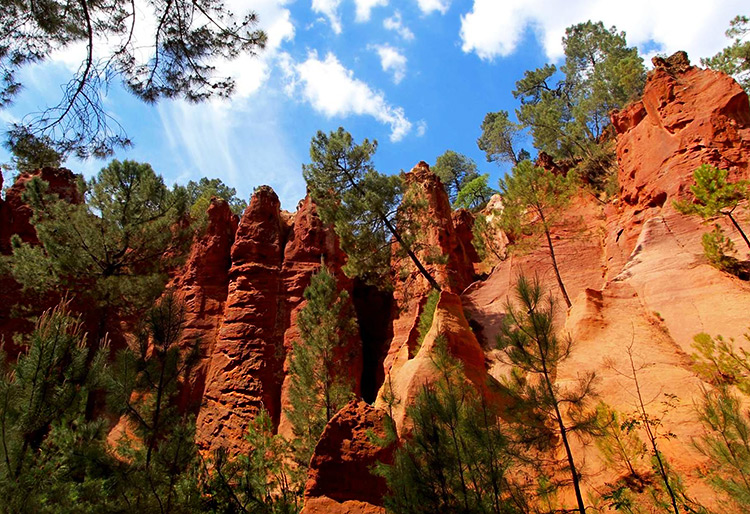 Oppède le Vieux is a small village seated on a hill. This is a semi-wild, but charming place with a church urgently demanding renovation, a destroyed castle, half-ruined houses, and beautiful panoramic views of the surroundings.

Its history is long and rich. Oppède le Vieux was founded in the 11th century, changed owners many times, saw the Albiguian Wars, and was a property of the Pope. It became infamous thanks to bloodthirsty Jean Maynier, Baron of Oppède, the owner of Oppède-le-Vieux’s castle in the 16th century, who undertook a crusade against the Vaudois population, destroyed 11 villages, and killed three thousand Protestants.

While this attempt was not successful, a few lived-in houses remained on the top of the hill and you may rent one of them for €1,500-1,800 for a week. French and Hollywood stars try to resurrect the old part of the town, organizing summer charity concerts there. It’s possible that someday Oppède le Vieux can become as fashionable a place of Provence as Gordes. 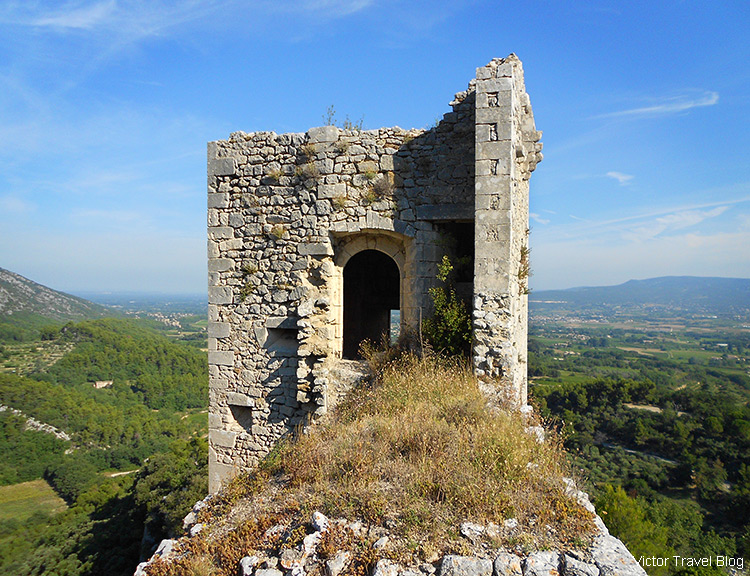 We started our excursion from the new town which is not so new in reality, because it has several old fountains and a church with a clock tower. An ancient city gate on the tiny Cross Square gives the start to the old half-ruined road leading to the hill, passing old walls with arched doors and windows of the Renaissance epoch, and ending with the fairly well-preserved Église Notre-Dame-d’Alidon. The church turned out to be bigger than it seemed from outside, and its decorations looked more Byzantine than Catholic. Several frescos on its blue walls have lost their colors, but they are still impressive.

There is only one object located higher on the hill: the ruins of the medieval castle of Oppède abandoned in the 17th century. Ruins are our everything. The imagination draws bright pictures of medieval life here 500-600 years ago. I tried to storm an old door. What interesting things are hidden inside? But the meeting with French gendarmerie was not a part of our plan, therefore we retreated. 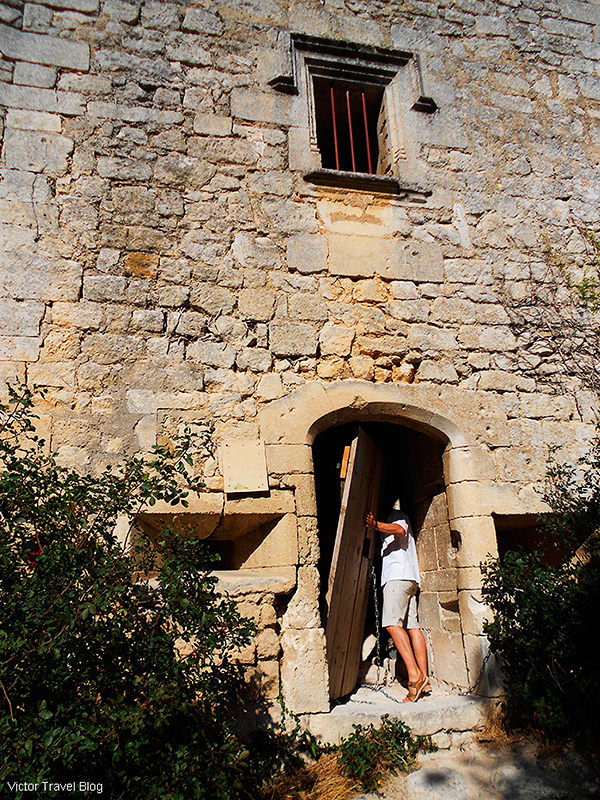 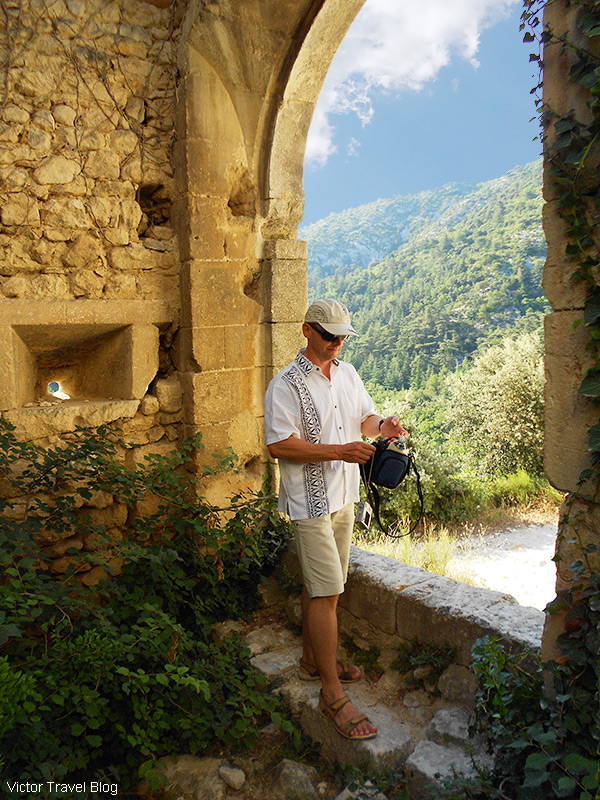 In search of lavender fields, we explored the whole geographic triangle of Gordes – Roussillon – Sault. What impressions of summer in Provence will you leave with? This is a region of tastes and aromas. Everything buzzes around you, and you don’t even fear of bees and bumblebees, because they simply do not care about you, they are too busy with their work. Everything is bright and colorful. Vincent Van Gogh, Paul Gauguin, Henri Matisse, Paul Cezanne, Marc Chagall, and Pablo Picasso worked there. Many modern artists support the tradition trying to capture the authenticity of Provence. 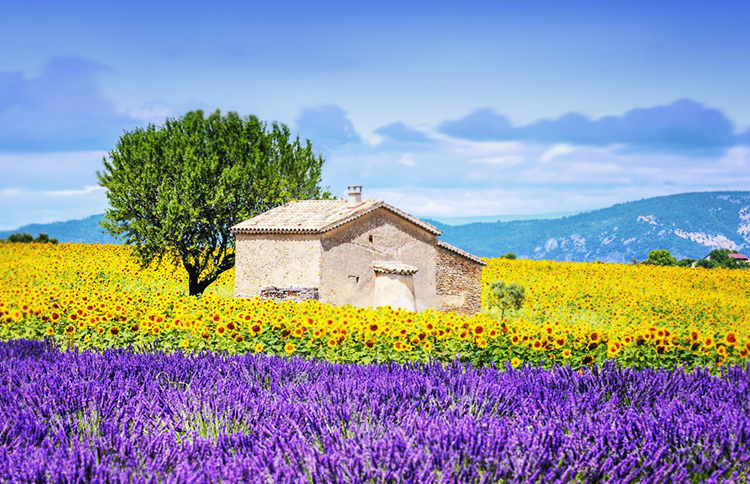 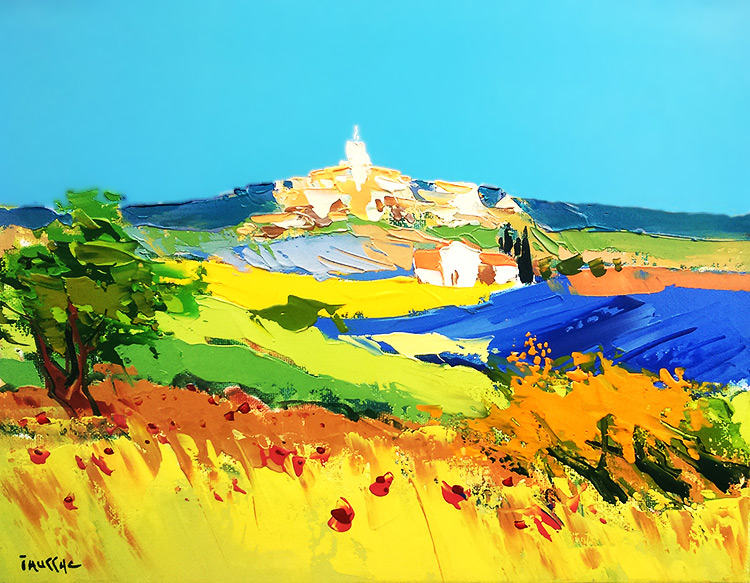 Living amid such colors, local inhabitants definitely have a strong reason to be happy in reality. They don’t need to dream about Machu Picchu.

Montmajour Abbey and the Necklace of the Decapitated Queen
Le Mont Saint Michel: The Grave of God
How Not to Die of Hunger Examining Benedictine Abbey in Jumieges