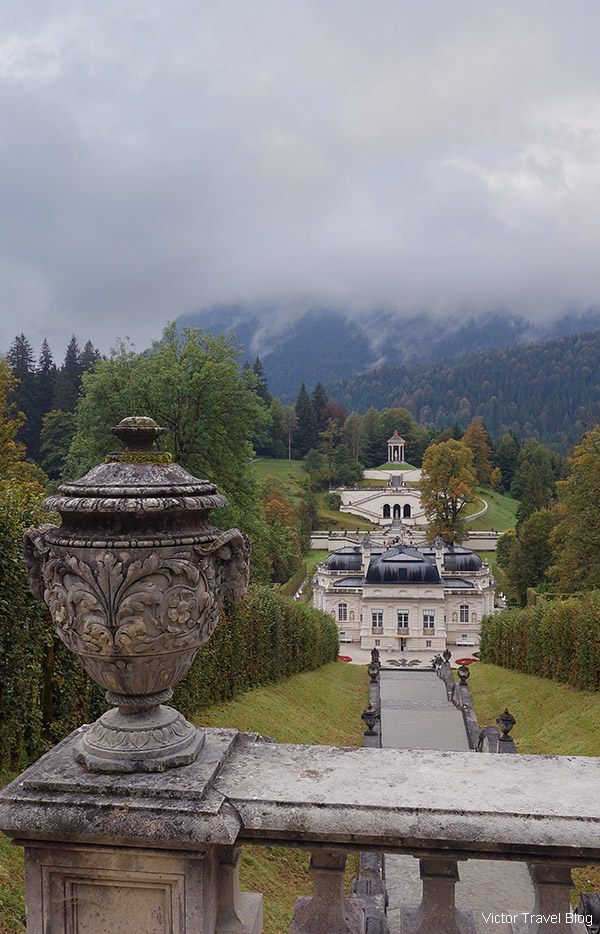 A cascade in Linderhof, Bavaria, Germany.

Who has not tried to replicate Versailles, the famous palace of Louis XIV, the king of France? Just look at Sanssouci, Peterhof, or Schoenbrunn to name a few. The young king of Bavaria, Ludwig II, also didn’t remain uninvolved. When he ascended the throne in 1864, at the age of 18, he immediately started to build his fairy tale castles and palaces. One of them, Linderhof, was supposed to be a new Versailles in the Bavarian Alps near the Linder River.

King Ludwig’s landscaper and Court Garden Director, Carl von Effner (1831-1884), developed fourteen projects of the park before the king realized that this area was too small for a replication of Versailles Park and dropped this idea. Later, it was created on the island of Herrenwörth on Lake Chiemsee and called Herrenchiemsee. Linderhof was destined to become a mini-palace, in fact, a royal “country palace,” and the only building completed in Ludwig’s life. The king spent most of his time there. Today, this is a museum. 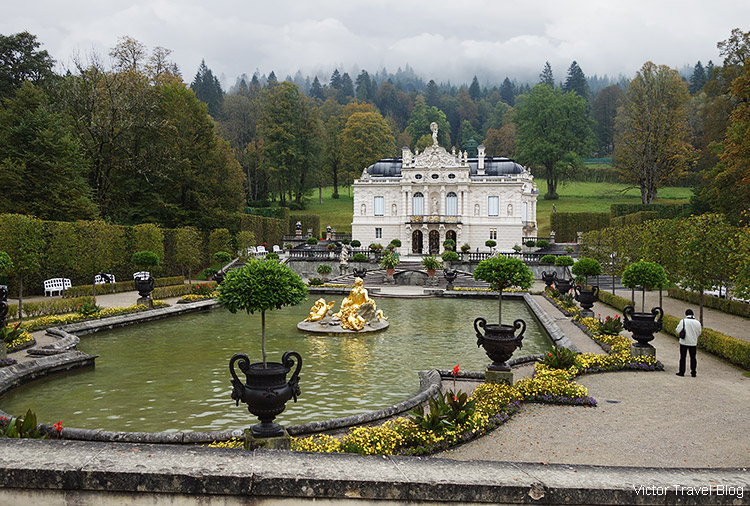 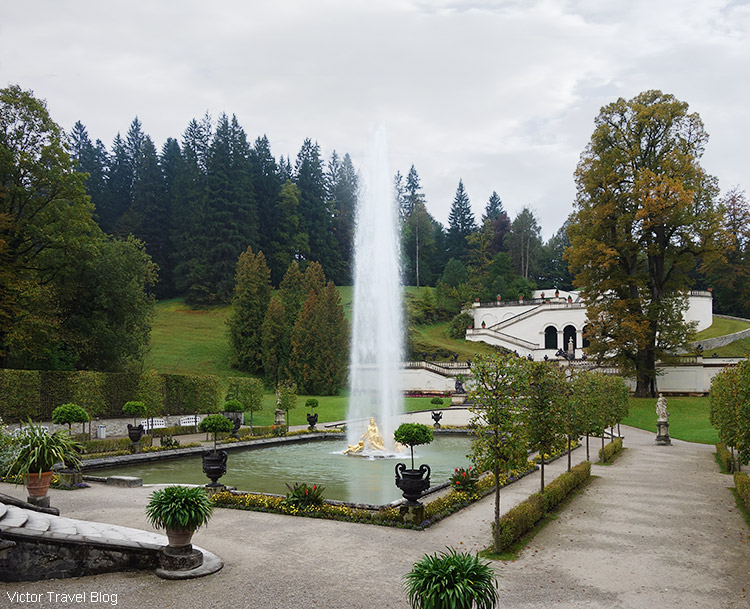 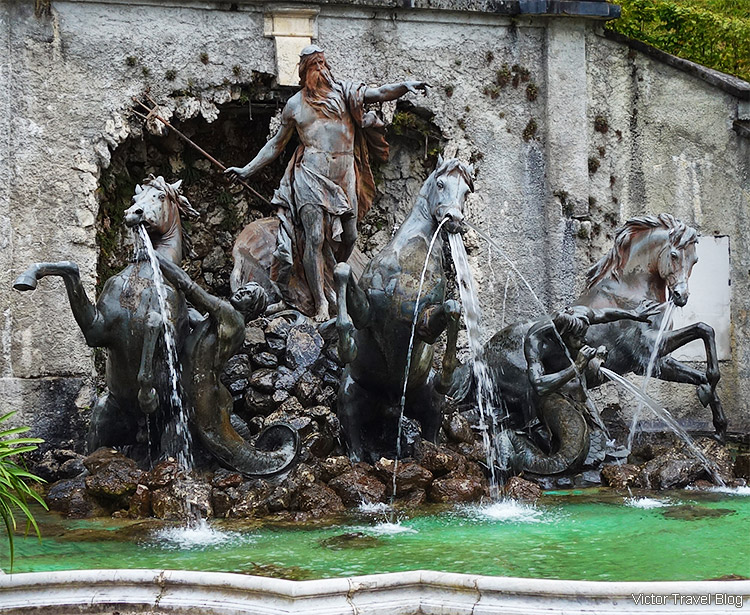 Taking photographs is forbidden inside the palace. Why? Later, I will try to take a guess. Meanwhile, let’s go in. Only guided tours are possible. They are conducted in English and German. It was a gloomy autumn morning, so, not surprisingly, Irina and I were the only guests. Our guide switched on soft music and began to talk. I didn’t listen because I was prepared for this visit, and had read everything that was possible to find on King Ludwig and his architectural activity. Instead, I tried to understand why I felt something strange in this building. I have visited more European castles and palaces than I can count, but only there, in Linderhof, did I have such a feeling. What was the matter? I started to understand it near the end of the excursion.

Like everything in the life of the “fairy tale king,” this palace seemed a little bit theatrical, or fake. The building that looks like stone is built of wood. The gobelin room has no gobelins, but just painted à la gobelin walls. Gold is everywhere, too much gold. I understand that the Sun King Louis XIV was able to use all the gold of France to decorate his palace. Catherine the Great, Empress of Russia, was able to use tons of gold for decoration of her palace in Tsarskoye Selo. They were absolute monarchs. Ludwig was not (although he dreamed to be). There was also a government which thought that Ludwig spent money on “nothing,” and tried to restrict him.

So why is Linderhof full of gold? Is it gold at all? And if yes, how thick is the layer of gold on the moldings? Unfortunately, I had no opportunity to peel off a piece of gold decoration and test it by sinking my tooth into it. The guide kept her eyes on me the whole time.

Venus Grotto (I called it a “concert cave”) is an artificial construction, but created so naturally and masterfully that once inside, you feel as if you are in a real cave deep underneath. It was a concert hall of King Ludwig. Here, boating on the lake, he listened to operas by Wagner all alone. Waves on the cave lake were generated by special machine: one of the first electrical engines in Europe. The water was heated, and young nymphs swam there. It looks like Ludwig “invented” disco light. Lights were changed by the use of metal plates. An advanced theatrical stage.

A picturesque area near the Linder River in the Bavarian Alps was one of the favorite hunting places of Ludwig’s father, King Maximilian II of Bavaria, where they often stayed in the forester’s house (later a Royal Lodge) which was on the royal property. As you may know, the Sun King Louis XIV of France built Versailles on the location of his father’s hunting house. Fairy tale King Ludwig did the same. However, he left the Royal Lodge in Linderhof Park, just moved it 300 meters to the west. It’s still there to this day.

There are many interesting and symbolic places in the park. If you have time, you will find them. Here is a map:

The map of Linderhof gardens and park. Click to enlarge.

I highly recommend visiting Linderhof and its gardens. The palace is toy, but charming. The gardens are modest, but cozy. The fountains with their sculptures are splendid. The “concert cave” is artificial, but magical.

Later, we visited Herrenchiemsee New Palace, King Ludwigs own Versailles. Yes, it is a real palace, enormous and majestic, but you know what: If I had been invited to choose where I would prefer to live, I would have chosen Linderhof. 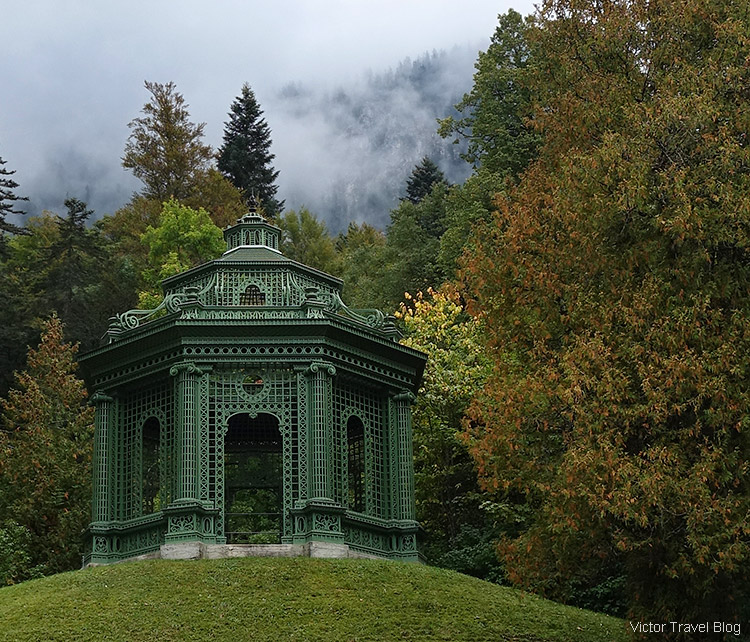 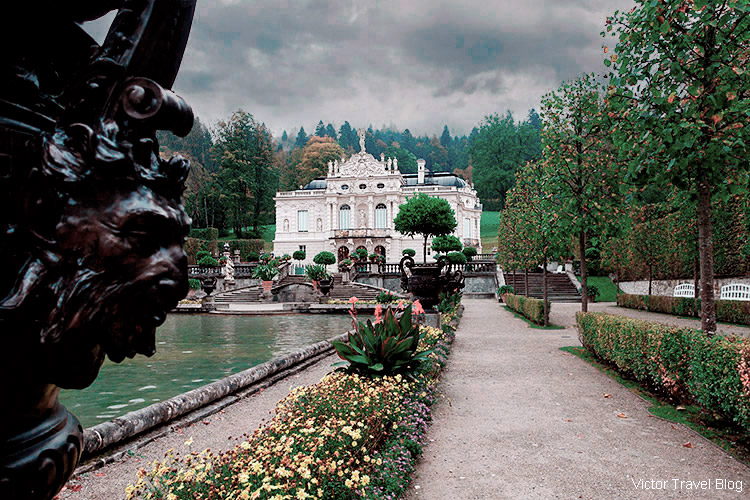