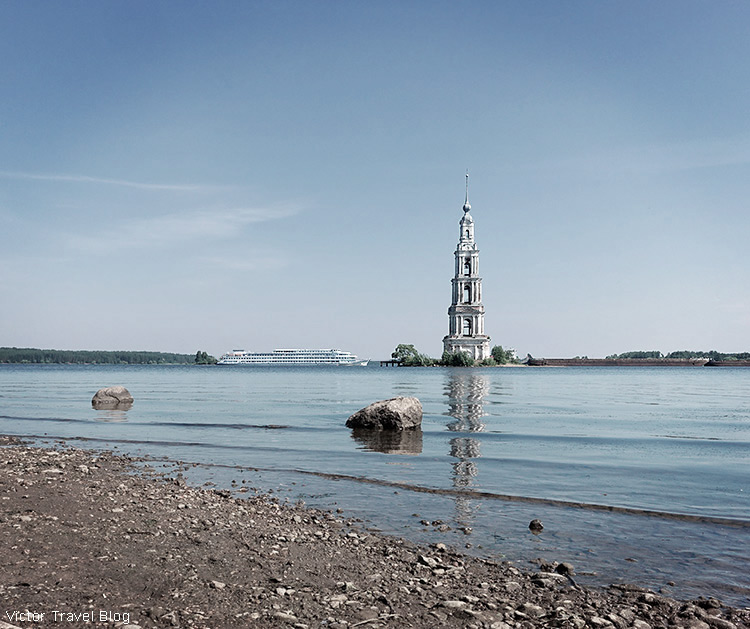 The bell tower of the flooded city of Kalyazin, Russia.

One day, we bought tickets for a river cruise ship from Moscow to Uglich, the ancient Russian city famous for the fact that Ivan the Terribles son Dmitry was killed there. He was the last representative of the Rurik Dynasty which ruled in Russia for 500 years until the end of the 16th century. But today’s story is about a miracle you can miss in the middle of the cruise (for example, by sleeping in your cabin). It’s a beautiful bell tower standing half flooded right in the middle of the Volga River.

The trading town of Kalyazin was settled on the high bank of the Volga. The small river of Zhabnya, flowing into the Volga, separated the town into two parts. The Monastery of St. Nicholas was located on the one bank of Zhabnya, the Trinity Kalyazin Monastery on the other one. In the 18th century, the population of that area grew thanks to blacksmithing, shoemaking, and pottery. Kalyazin also was famous for its lace which was sold in Moscow and St. Petersburg. Trade traffic was growing, and Catherine the Great gave Kalyazin city status in 1775.

The Monastery of St. Nicholas quickly became one of the biggest and richest in the region of Tver. Around 1800, a beautiful five-tier bell tower almost 75 meters high (it’s like 25-floor building today) was erected near its main church. Light and elegant, it overlooked the city, and the sound of its bells was heard for kilometers.

In 1917, the epoch of the Soviet Union started in Russia under the slogan “We will build a new world.” Of course, the “old world” was supposed to be destroyed. Communists rejected religion, and for starters, banned church bell ringing.

In the 1920s, an ambitious project was developed: a few hydropower plants on the river Volga. Accordingly, several cities and hundreds of villages located on its banks were to be flooded. Mologa, Korcheva, Vesjegonsk are just some of the flooded cities. Kalyazin also went under the water of the Uglich Reservoir together with its cathedral, churches, houses, and streets.

Some citizens thought it was just rumor and refused to leave their houses. They were flooded together with their property. According to a declassified certificate of NKVD (Ministry of the Interior), 294 lives were lost, but how many people actually preferred to die at home, we don’t know.

The upper parts of the Nikolsky Cathedral and its bell tower remained above the level of water. The cathedral was demolished, but the tower stands to this day. Probably it was supposed to be a nautical marker, because the Volga makes the sharp turn to the left to Uglich. There, from the ship, we saw the Kalyazin Bell Tower for the first time. 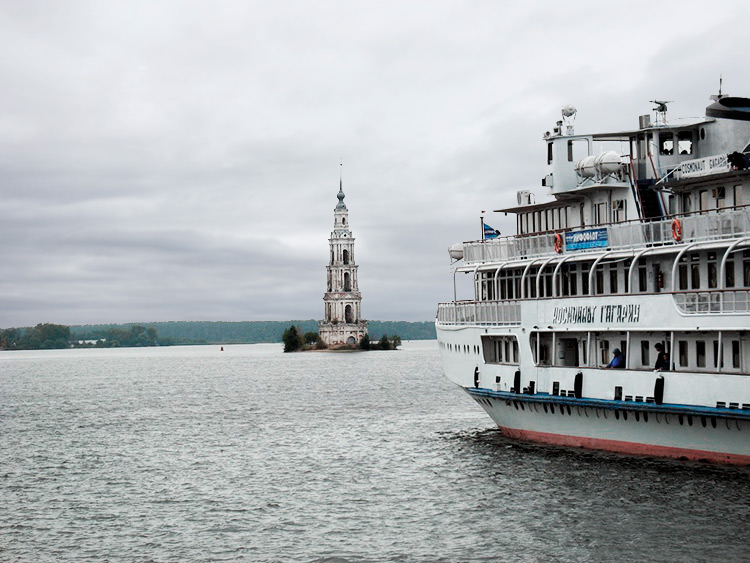 When the reservoir was full, the bell tower ended up 200 meters from the shore and two thirds of it above water. It was decided to dismantle the main bell, but the problem was that it weighted 16.6 tonnes. This giant was cast in 1895 in honor of the accession to the throne of Emperor Nicholas II. It looked like the perfectly made thing from the “old world” couldn’t bear such mistreatment. It dropped down through all the five tiers of the tower. To raise it from the water was impossible, and the bell was forgotten.

It’s said that in early June of 1941, people started to hear rare and initially quiet strikes of the flooded bell. Strikes became increasingly louder and more frequent, and in the night of June 21/22, the bell was ringing almost continuously. In the morning, people heard that Hitler’s army had attacked their motherland, but they had already been warned about the approaching disaster by the bell of the flooded city of Kalyazin.

After the war, the administration of the Tver region decided to “calm” the troublemaker. Divers immobilized the bell clapper to exclude the possibility of ringing, but in 1979, people heard it again, and on 25th December, Soviet troops crossed the border of Afghanistan. The bell had warned people, again. This time, the administration created a tiny artificial island around the bell tower to bury the restless bell not only under water, but also underground.

Legends? Probably. But maybe thanks to them, the bell tower of the flooded city of Kalyazin has gotten a second life. Today it’s an architectural and historical monument. Almost 80 years after the flooding, the bell tower was returned to the church and consecrated again in 2007. Orthodox Christians hold a Divine Service in it several times a year. 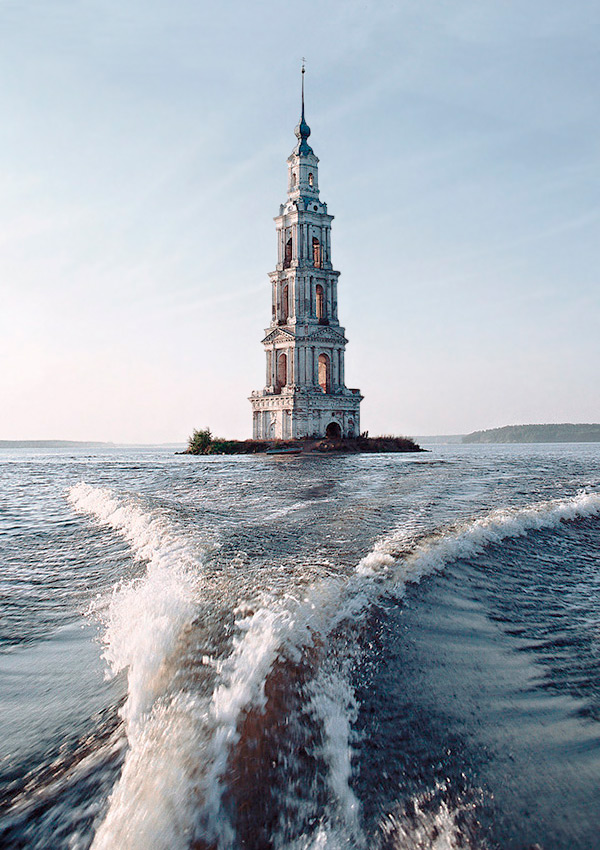 After reading this history, we decided to visit the bell tower once more, but this time by land. It is just 180 km from Moscow to Kalyazin. We took a car, and found ourselves in the city in three hours. The wide street (Karl Marx Street, by the way) leads to the Volga River and goes right under the water. The flooded Kalyazin bell tower stands 200 meters from the road. We were told that people walk to it on ice in winter. There are many winter pictures on the Internet. 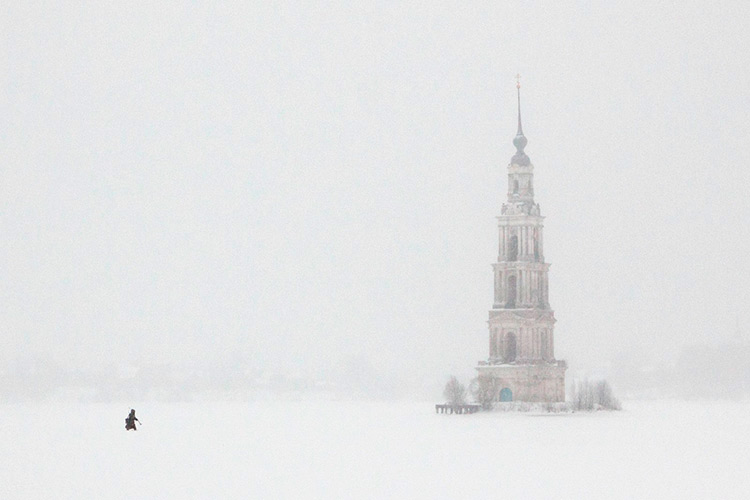 The bell tower of the flooded Kalyazin in winter.

I took a few pictures of the bell tower, and let Irina, my wife, take the rest of the photos while I was enjoying the views of the Volga. With enormous enthusiasm, she photographed the bell tower for about an hour from various angles, and then we headed back to Moscow happy and a little tired. Later, it was discovered that Irina forgot to insert a memory card into her camera, therefore just a few pictures in this post are mine. We took others from the Internet. 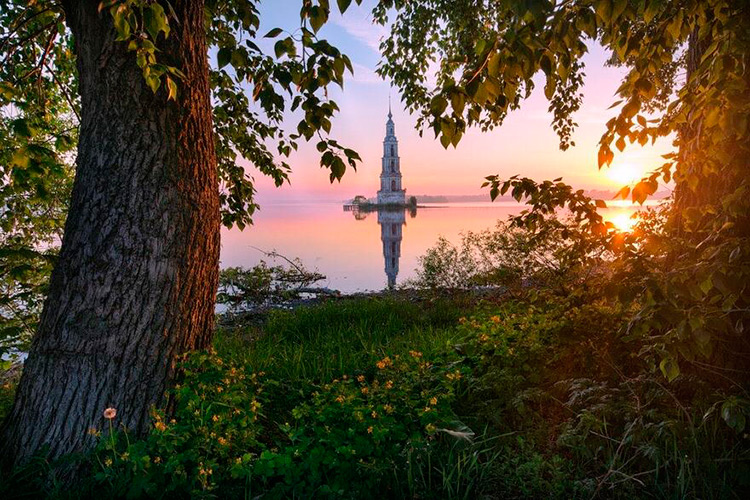 The flooded bell tower of Kalyazin from a drone.

Although 180 km from Moscow is nothing, don’t bother to repeat our auto trip. The modern city of Kalyazin has nothing interesting to see, and you will get a much brighter impression of its flooded bell tower, standing on the deck of a cruise ship from Moscow to Uglich. The white beauty will be visible for just a couple of minutes. Don’t miss it.

Pavlovsk Palace: Not so Much a Palace as a “Home, Sweet Home” of Russian Emperors
Peter I and His Baroque Church, Only One in Russia
Russian Winter on Volga