In the 13th century, the Cathar Crusade of Pope Innocent III against heretics of Languedoc brought to submission many cities in the South of France. To his crusaders, the pope promised all the lands which they would free of Cathars. Of course, landlords of Languedoc didn’t like the idea of their properties being used as a prize. Together with the Cathars, they held the fort in their castles for 10, 20, and, in some cases, 50 years. Most of the castles were located on inaccessible rocks. Today, you will find just their remnants, but some of them have kept their greatness.

The Puilaurens Castle (Chateau de Puilaurens) was destined to be the last stronghold of the Cathars. It wasn’t a luxury palace with fabulous decorations designed to show the wealth of its owners to neighbors. The harsh fortress was built with one simple goal—to defend.

Almost 800 years have passed, but the Puilaurens Castle still instills a sense of the highest reliability, security, and power. The condition of the fortress is superb, probably thanks to its location in such a wild place. It seems as if little has changed there and you still could feel the pulse of those volatile times. Only in such isolated areas of Europes most visited country can we touch undiscovered mysteries of the Cathar heresy.

Historians still discuss the nature of the teachings of Cathars, who also were called Albigensians based on the erroneous belief that they were concentrated in the town of Albi, France. One of the main Cathar principles was dualism. They believed in the existence of two opposing forces—good and bad—and said that our world and even we ourselves are the arena of the struggle of those forces. They denied the Old Testament, considering it the Jewish heritage, and recognized the New Testament and the divine nature of Jesus. Thus, their teaching was Christian.

In 1208, the Albigensian Crusade, a military company of Catholics against Christians, started. It turned into the long line of sieges, uprisings, and massacres, but the important cities of heretics, starting from Béziers and Carcassonne, were taken by the pope’s army in the first few years. The heretics fled to the mountains and took refuge in the castles of nobles who sympathized with them. Crusaders besieged and demolished one castle after another including Queribus that was located just 30 km from Puilaurens. But the Puilaurens Castle was never sieged and taken by them.

Imagine a 700-meter-high rock and the mighty castle on top of it. You couldn’t use a trebuchet, catapult, or ballista. And don’t even think about a battering ram. You couldn’t deliver it uphill to the doors of the castle. Siege tower? Well, it would have to be as high as a skyscraper. There was no flat site around the castle walls, but only mountains covered by the dense forest, and nothing has changed today.

For us, it was impossible to be in Languedoc and not climb up to Puilaurens. We were ready to “storm” it through rain or snow, but we were lucky with the weather in that late spring.

A narrow route through the forest was steep and rough, so it wasn’t easy to climb up even without armor. I think the rain is able to make this way impassable. Very soon, we started understand why the castle wasn’t ever conquered.

In an hour and a quarter, we saw the next impediment. No, it wasn’t the doors or walls of the castle, but an artificial zigzagging path in a cleft in the rock. Almost vertical, it was perfectly located in the line of fire from the towers and walls above it. Thank God, we did not have to tackle it in a hail of arrows. Today, only wind whistles here.

While we were climbing, I thought about how and why they built this miracle of fortification in such a wild place? There is nothing here. Two villages with a dozen houses in the valley don’t count. They wouldn’t have paid for the investments into the construction of the Puilaurens Castle even in 800 years.

Later, already at home, I’ve read it was an observation post. Many years, this area was forced to survive surrounded by Aquitaine, Aragon, and France which didn’t like each other. Therefore war was a common state for the local residents. In time, a castle was built on almost every mountain.

However, in the first half of the 13th century, everything was relatively calm in Puilaurens and in the whole area of Fenouillèdes because it belonged to the King of Aragon from 1162. Probably, when the powerful were dividing Carcassonne and Toulouse, such a small thing as the Puilaurens Castle could wait.

Even when Guillaume de Peyrepertuse, a Cathar sympathizer, had lost his castle of Peyrepertuse in 1226 and found his refuge in Puilaurens, no one pursued him. And this, despite the fact that he had struggled with French troops for about 20 years.

After the fall of the Château de Montségur, the Cathars who survived fled to Puilaurens from every corner of Languedoc. Considering the inaccessibility of the area their resistance had some chance of success. 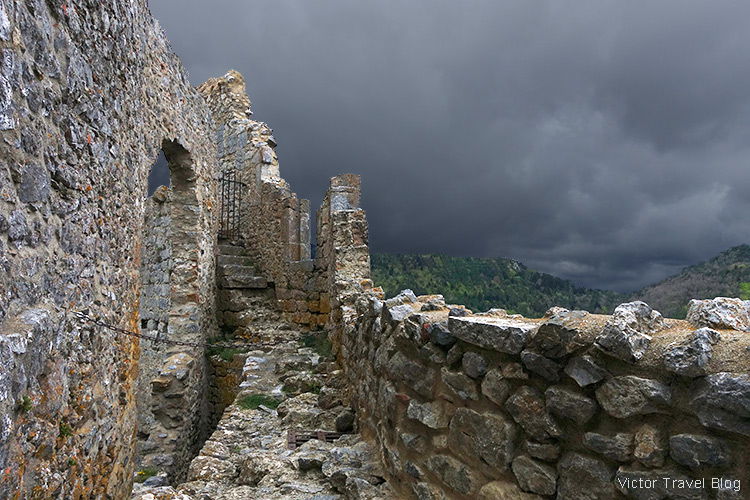 During the Albigensian Crusade, Catholics were ruthless in the Cathar regions and killed everyone who was suspected of heresy. But the behavior of Cathars made little sense by modern standards. They often ascended onto the bonfire voluntarily.

According to their teaching, our world wasn’t created by God, but Satan. They believed if God is kind, he wouldn’t cause so much suffering to his creatures, but Satan could. That’s why our world is full of sin, blood, and pain. This is purgatory. People must strive to live a pure life, step by step approaching God, and death is just the meeting with Him. Therefore Cathars didn’t fear death, and even craved it.

Nevertheless, some Cathars resisted the Catholics. Catharism continued to exist in this region a few years more, but gradually it faded. No one stormed the Puilaurens Castle; it lost its strategic significance and was destroyed by time. The Cathars’ period was just one short episode of its life, and the old noble fortress remembers a few more histories.

Our “storming” of the castle wasn’t simple, but the feeling of history inside the remnants of its walls and the view of the neighboring castle of Queribus were worth the efforts. Puilaurens: a big, empty, but charming fortress on the top of the rock, only the sky is higher. 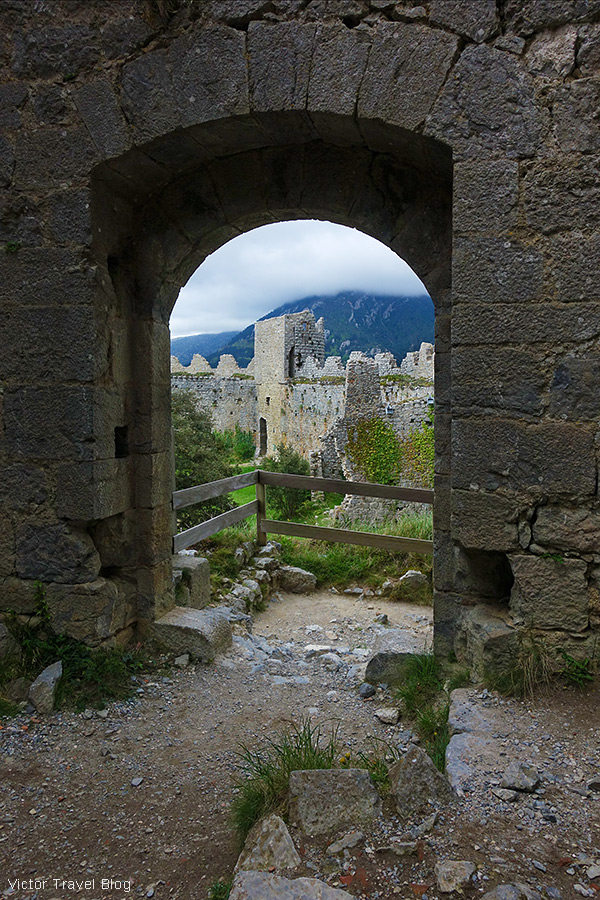 The Puilaurens Castle was declared a historical monument in 1902.

The Puilaurens Castle from a drone (3 minutes).

The castle stands on a spur of rock above the Boulzane Valley and the villages of Lapradelle and Puilaurens. There is a path from Axat to the castle. To find the castle head towards Lapradelle between Quillan and Perpignan.

Hermann Göring’s Castle, Mauterndorf
A Dreamboat of Photographers—Alcazar of Segovia
Pays Cathare or the Noble Ruins Remembering the Cathar Heresy