Why We Adore Castle Ruins: Hohenfreyberg and Eisenberg, Germany 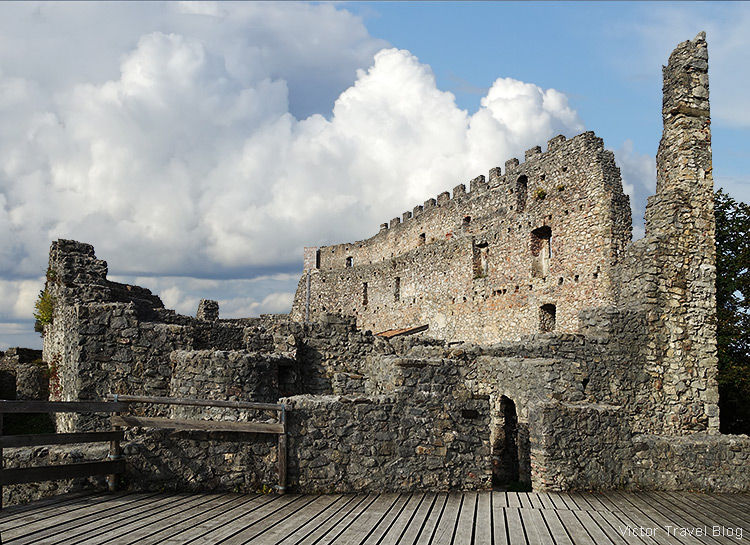 Ruins of the castle of Eisenberg, Germany.

It seems that some of us prefer ruins to whatever these ruins were before the deterioration: castle, estate, or palace. Why? Is not it better to admire the decorated ceilings of the Vatican; the interiors of Versailles, France; or the marble floors of St. Johns Co-Cathedral, Malta? Undoubtedly. But just imagine what our descendants will see in these places, if they find them in ruins (heaven forbid) as we found ruins of temples in Angkor, Cambodia, Cathar castles on the rocks of Languedoc, France, or the heroes of today’s story, the castle ruins of Hohenfreyberg and Eisenberg in Bavaria, Germany. 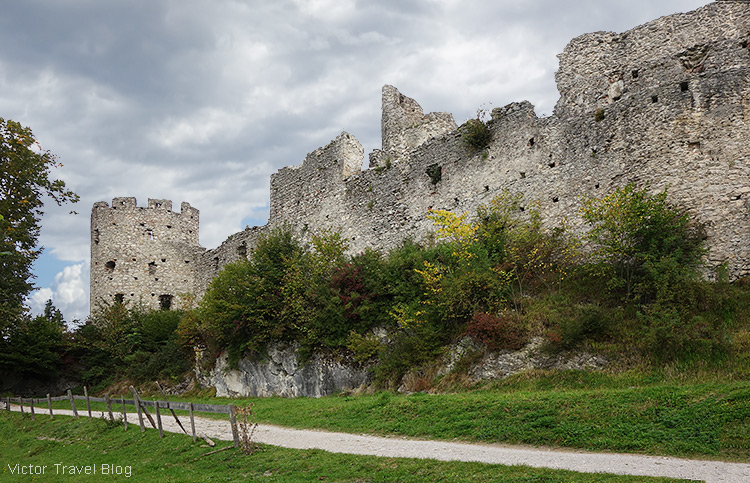 Ruins of the castle of Hohenfreyberg, Germany. 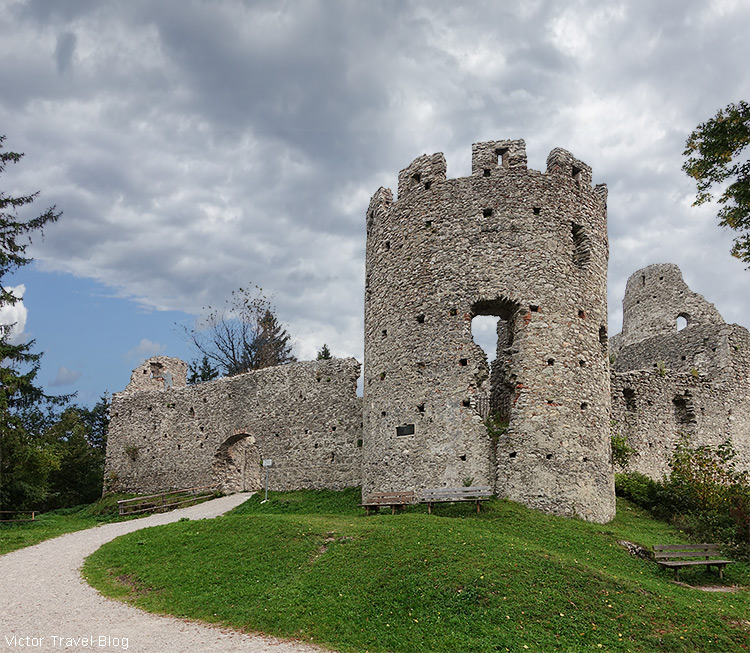 The Hohenfreyberg castle doesn’t have an intriguing history. Its construction was started in 1418 by Frederick of Freyberg, the oldest son of the constable of the neighboring castle, Eisenberg. Probably, he wanted to live separate from his father to date girls freely. In 14 years, he and his brother erected a true medieval castle with two palaces and an impressive dungeon. The new castle looked as if it was 200 years older. If Frederick of Freyberg wanted to create a symbol of aristocratic power in the times when the bourgeois class was in its ascendancy, he succeeded.

The Freyberg brothers sold the castle to Archduke Sigmund of Austria who sold it to Emperor Maximilian I, and at last, an Austrian merchant, Georg Gossembrot, became the owner of the castle and deployed its major reconstruction. (Below, we’ll have some interesting questions for him.) He heightened the enceinte, surrounded it with a second row of walls fortified by three towers, one of which was the mighty artillery roundel, and made a new main entrance to the fortress.

Upon the end of the reconstruction, Hohenfreyberg looked like a small, but powerful medieval fortress. Georg Gossembrot realized his project in three years and died before he could enjoy the results. History has recorded the sum he spent on the reconstruction as 18,000 florins (approximately 2,500,000 modern US dollars). 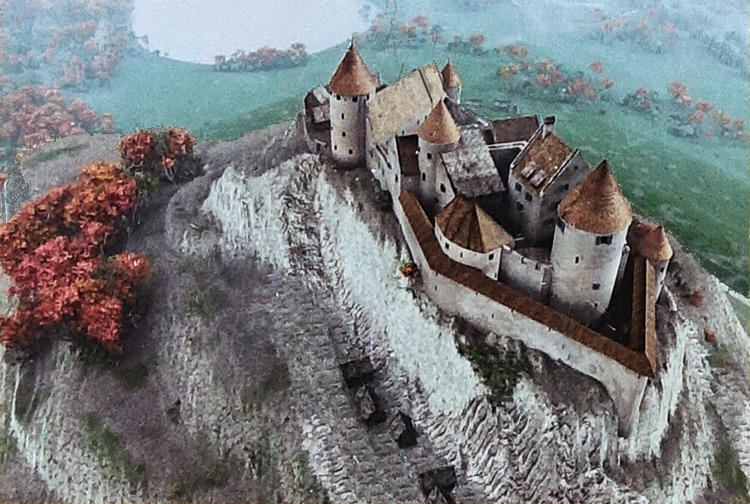 Eleven years later, his widow, Radegunda Eggenberger, sold Hohenfreyberg to Austria due to a lack of resources to maintain it.

All the investments into fortification of the castle paid off during the German Peasants’ War in 1525. At that time, unlike Eisenberg castle which was taken by peasants in the blink of an eye, the fortress withstood a siege until the arrival of reinforcements from Innsbruck. The ruins we see today were not the result of military attack. In 1646, the Austrian government just burned out their own castles of Hohenfreyberg and Eisenberg (unnecessarily, as it turned out), not willing to allow Protestants to get them. Since that time, the castles have remained in ruins. 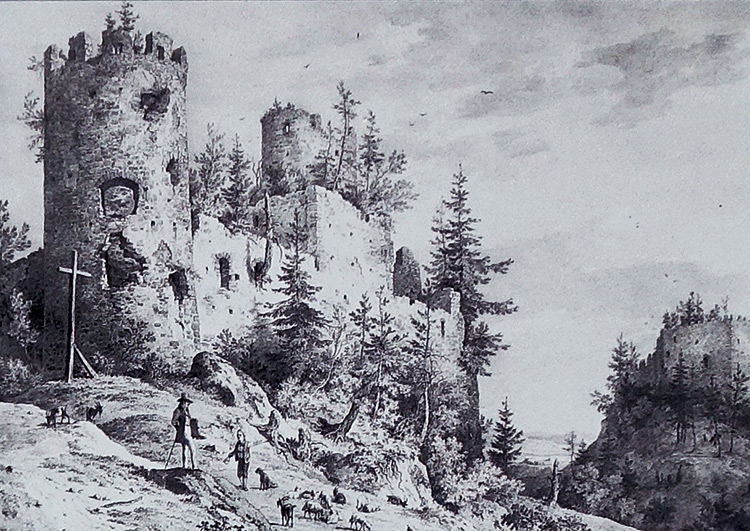 Ruins of the castle of Hohenfreyberg, Bavaria, in 1830. 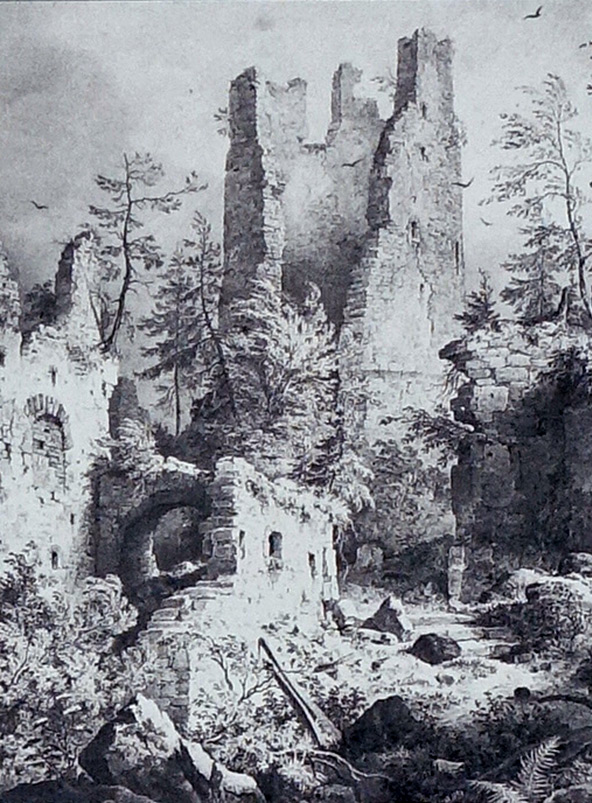 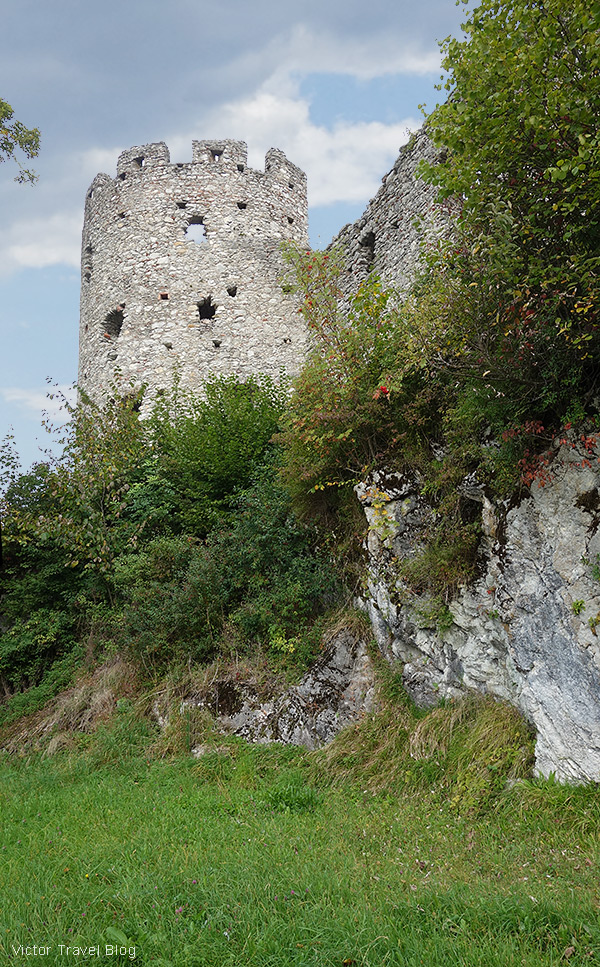 That’s all. No imprisoned princess, no ghosts, no vanished treasures. Nothing.

But what about our imagination? Why is it given to us at all? Let’s turn it on and enter the ruined castle of Hohenfreyberg.

Towers are always beautiful and enigmatic. Every self-respecting tower has a room on the top, and a young beautiful girl, preferable of royal blood, must be locked up there for at least one night in the history of a castle. Just look at the ruins of the main tower of the Freyberg castle.

The proud daughter of the above-mentioned merchant was in love with a minstrel who sang pretty well, but didn’t have any money. The father locked her in this tower to prevent her meetings with the minstrel, but every night, she turned into an owl and flew to him. At last, the father lost his patience, took an enormous pair of scissors and….

Don’t worry. In reality, Georg Gossembrot married his daughter, Sibylle, to Lutz of Freyberg, a relative of the Freybergs from the neighboring castle of Eisenberg.

What powerful walls, both internal and external. Why did a simple merchant build a mighty zwinger (an open area between two defensive walls)? Was he rich? Undoubtedly. In that case, why couldnt his widow maintain the castle and have to sell it? Possibly she didn’t find her husband’s savings? Maybe they are still here, right under our feet, underground? Where would you hide your treasure in your own castle? In the tower walls? Dangerous. One direct hit of a cannonball would scatter your diamonds in a radius of 100 meters. In a dungeon? Everybody would start searching in the center of the fortress. Under the kitchen? Exactly! Let’ start to dig right now!

Enough. Restrain your imagination. This castle is still a property of the Freybergs. Let them dig. 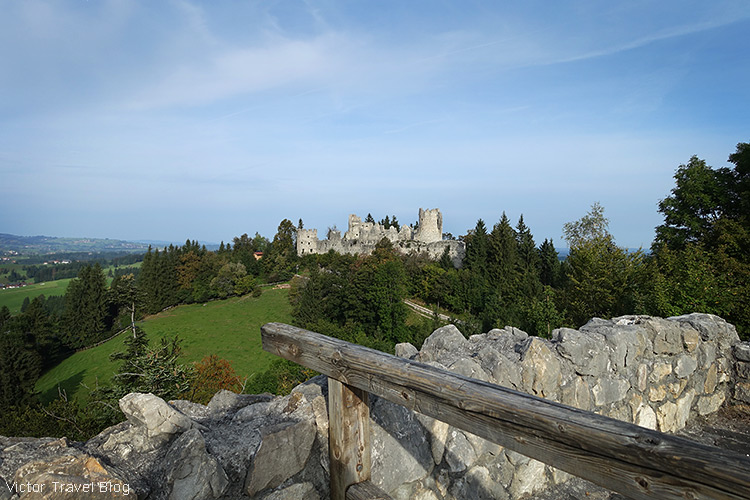 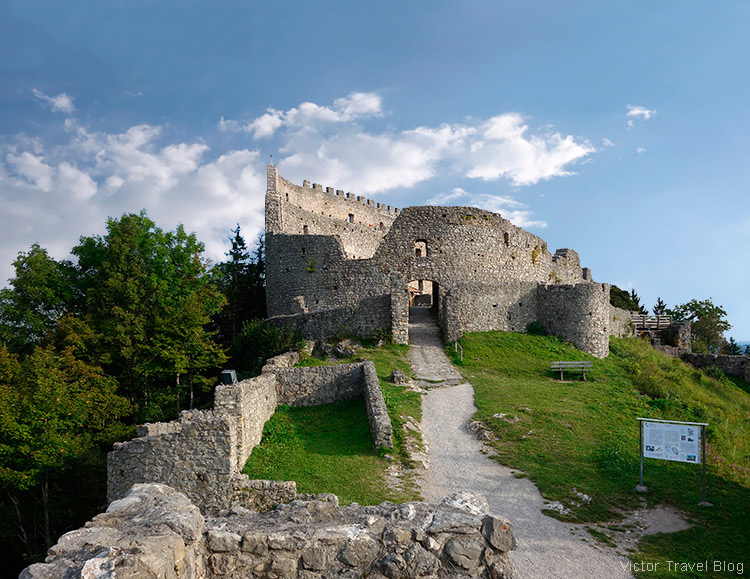 Ruins of the castle of Eisenberg. 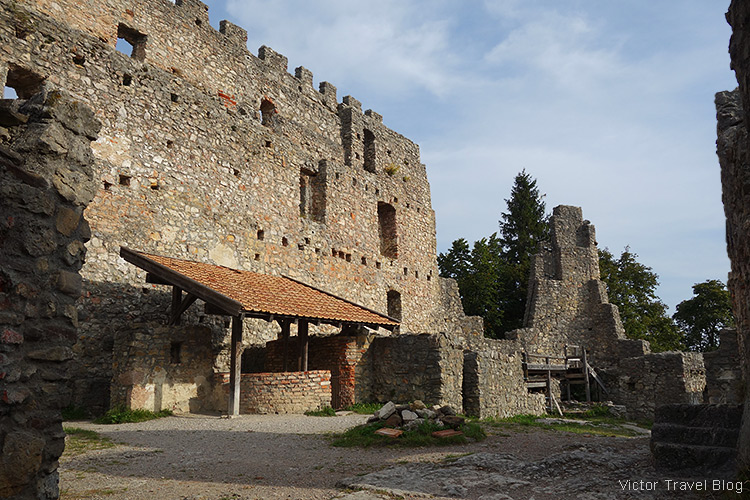 So, why do some of us like historical ruins even more than whole fortresses or palaces? When you enter the Vatican, Versailles, or Villa Borghese, you don’t have to think or dream. Everything is ready for assimilation. Just look. Ruins are another matter. You have only stone walls sometimes one meter high, as they are in Mycenae, Greece. Nothing more. Your imagination has to build and decorate all the rest.

View of the historical ruins of Hohenfreyberg and Eisenberg castles from a drone (3:40).

You stand in the middle of the enormous main hall of the ruined medieval castle and think. What paintings would I hang on this wall? Or would it be a gobelin? What stone decoration would be better for this chimney? What about windows: to use simple glass or stained glass? What will be standing in that niche, a statue or a vase? How big must the table be? How many chairs will I need for my guests and what color of tapestry do I prefer? What furs should I put on for tomorrow’s ball? And lastly, how many diamonds should I insert into my crown?!

A long time ago, I told fairy tales to my son at bedtime. Since I didn’t remember traditional ones, I composed a new story every day. And, you know, it was not too hard. Now imagine you and your small “continuer of lineage” standing among ancient ruins and you tell one such story. With these decorations, the impression will stay with your progeny forever. 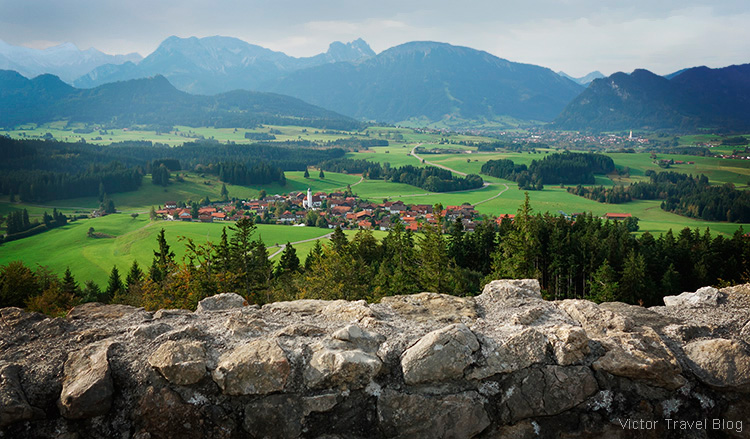 View of the village of Zell from the ruins of Eisenberg castle. 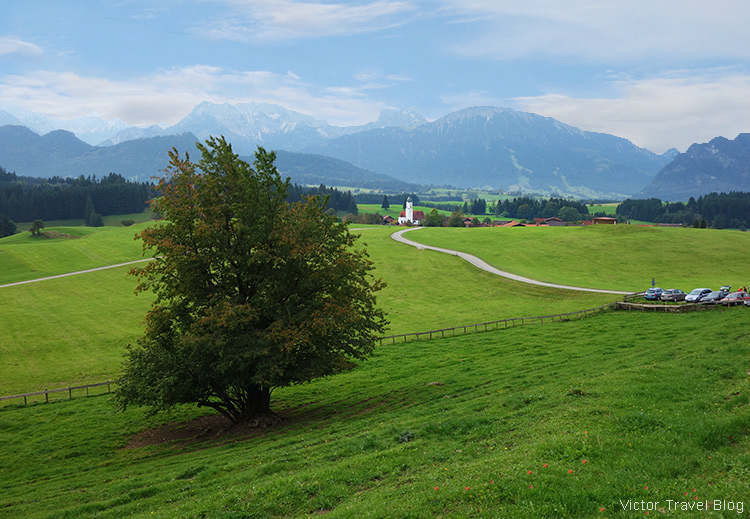 Hermann Göring’s Castle, Mauterndorf
A Dreamboat of Photographers—Alcazar of Segovia
Pays Cathare or the Noble Ruins Remembering the Cathar Heresy

21 Responses to “Why We Adore Castle Ruins: Hohenfreyberg and Eisenberg, Germany”