On September 3, 1941, the first Nazi tank was entering Pavlovsk from the west. The last Soviet tank was leaving the city, desperately shooting back with covering fire for three trucks. There were a driver and a woman in a lilac beret in the last truck. She was carrying a treasure that an uninformed person could have mistaken for a pile of garbage, just junk. But she knew better. She was sure the Pavlovsk Palace would be demolished by Nazis. She was also sure she would come back with Russian tanks, retake the former residence of Russian emperors and empress, and restore it down to the smallest detail. And this “garbage” would help her to do it.

The Russian empress, Catherine the Great, was so happy about the birth of her first grandson, Alexander (the future Emperor Alexander I of Russia), in December, 1777, that she presented to her son Pavel and his charming wife, Maria (her maiden name was Sophie Dorothea Augusta von Wurttemberg), one thousand acres of “woodlands, ploughed fields, and two villages with peasants” four miles from her summer residence, Tsarskoe Selo (in English – tsar’s village). It was the founding date of the village of Pavlovskoye, later the city of Pavlovsk. At first, on the high bank of the Slavyanka River, two houses were built: Paullust (from German – the joy of Pavel) for Pavel Petrovich and Marienthal (from German – the valley of Mary) for Maria Feodorovna. In May, 1780, Charles Cameron, a Scottish architect invited by Catherine the Great to build a new palace on the site of Paullust, started his work.

In September, 1781, Pavel and Maria traveled to western Europe under the names of the Count and Countess Severny (“severny” means “from the north” in Russian). Of course everyone knew who those young people were. Pavel and Maria had never been abroad and intended to visit Austria, Italy, France, Belgium, Holland, and Germany. They were young. They were in love. They had money. (Well, their mother had money.) Their home, sweet home was being built in Pavlovsk, Russia. What could be better? And they were happy.

They were greedily absorbing all the achievements of European civilization in art, culture, music, and production methods. In every city, they visited local historical sites, art galleries, museums, and, of course, antique shops. It’s hard to imagine how many merchants, artists, and artisans they made happy with their purchases. Their “shopping” went down in history. For example, visiting a pottery manufacture in Sèvres, Hauts-de-Seine, France, they bought porcelain goods for the unbelievable sum of 300,000 livres (about 100 kg of gold, if I am not mistaken). Everywhere, they were buying statues, paintings, tapestries, furniture, bronzes, fabrics, and glass, and numerous caravans were transporting all this to Pavlovsk, Russia, giving architects and decorators new ideas for the interior of the palace.

In 1803, after a fire in the Pavlovsk Palace, an architect, Andrew Voronihin, rebuilt the structure; however, the most awful thing awaited the Pavlovsk estate in 1941.

On September 3, 1941, the first Nazi tank was entering Pavlovsk from the west. The last Soviet tank was leaving the city, desperately shooting back with covering fire for three trucks. The red-haired 28-year-old woman in one truck was Anna Zelenova, a director of the museum of the Pavlovsk Palace. Two weeks earlier, she and her colleagues secretly started to evacuate and hide the most valued museum items which could be safely buried in the ground—statues, chandeliers, porcelain, and glass—in the park and forest. But she had not the opportunity to evacuate all the rest, therefore she did a great thing.

She took one item from everything that was in the palace: one chair from every set; one sofa; one item from every dinner, tea, and coffee service—one spoon, one fork, one knife; one piece from every wallpaper, silk and parquet from every hall and room; one example of stucco decoration from every ceiling; a piece of marble from every staircase. Nothing was forgotten. Everything was photographed, described, packaged, and transported to St. Isaac’s Cathedral in Leningrad (St. Petersburg today).

In two and a half years of occupation, the Nazis destroyed the park and palace. They chopped down all the 200-year-old trees in the park. It had been 600 hectares of one of the best landscaped parks in Europe. About 70,000 trees were destroyed. The Aryans burned all wooden furniture, floors, roofs, everything that could be used as fuel during the cold Russian winters. About 40% of the exhibits were stolen. In February 1944, before leaving, Nazis lit the palace on fire, and it burned for three days. The whole property of the estate was laid with landmines.

When Pavlovsk was freed by the Soviet Army, the government of the Leningrad region decided not to restore the palace. They thought it was not possible, but Anna Zelenova thought differently. She went to Moscow (people say she even spoke with Stalin) and obtained permission to start restoration work on the Pavlovsk estate. The first hall was restored and opened for visitors in 1957. All in all, the restoration took 33 years. Halls opened gradually, one by one, and from 1977 on, the museum already worked at full capacity.

Today, it is the same home, sweet home as it was in the times of Pavel and Maria Romanov, the Emperor and Empress of Russia. When you take a trip to Russia and visit Tsarskoe Selo and Pavlovsk, re-read this post to feel how much love has been put into the Pavlovsk Palace in the 18th century and again in the 20th century. And don’t forget to visit the memorial room of Anna Zelenova on the 1st floor of the left wing of the palace to remember that great woman who saved one of the UNESCO World Heritage Sites for us. 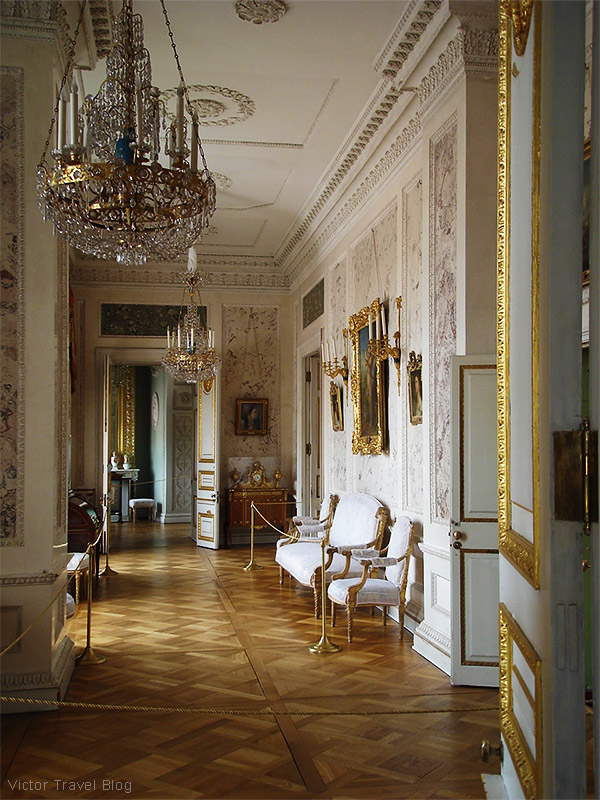 28 thoughts on “Pavlovsk Palace: Not so Much a Palace as a “Home, Sweet Home” of Russian Emperors”