We left Orvieto for Civita di Bagnoregio very early, at 7 a.m. Not used to small distances between cities in the Italian region of Umbria, we found ourselves at the place in half an hour. (From Orvieto to Civita di Bagnoregio: 27 km, 37 minutes by car.)

The Internet is filled with beautiful photographs of Civita di Bagnoregio, therefore we hoped to spend a whole day in this town and make our photos as good as those on the Web! We found a parking lot, paid for the whole day, left the parking ticket under the windshield, and in a good mood went to explore the “dying city.”

Civita di Bagnoregio is an ancient (near 2500 years old) Etruscan city on a hill of volcanic tuff. It is possible to get into the city only through the long pedestrian bridge over a precipice. We stood in front of it and read:

It’s no wonder that at 7:30 in the morning, there was nobody else around. We thought a little and went into the city without tickets, deciding to pay on the way back. 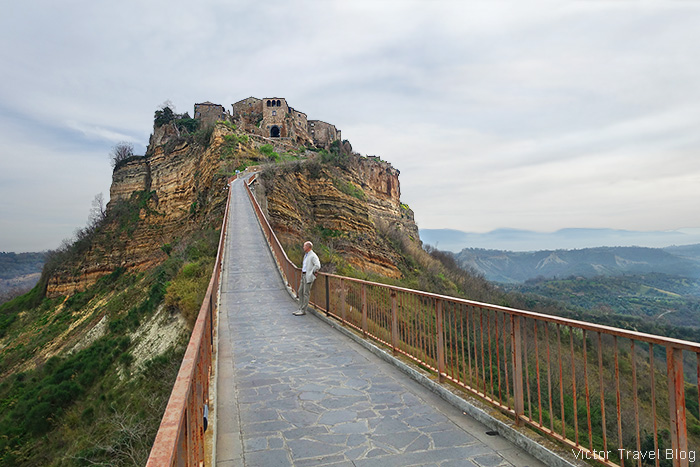 Why do you visit the city at your own risk? The fact is that in Italy, earthquakes occur often, and in Umbria too. Moreover, tuff hills are susceptible to landslides. People left Civita di Bagnoregio after one of these landslides, and the city got its nickname “dying,” in Italian “la citta che muore.” If a similar landslide happened during your lunch in one of the cafes, and you fell down into the abyss together with this cafe, the Italian government could not be held liable.

The dying city seemed quaint and quite alive. Maybe 20 years ago, its inhabitants left the city fearing new landslides and cataclysms, but now everything is different. Anyone wishing to run a tourist business has returned. There are even hotels in Civita di Bagnoregio, but I’m afraid a night in one of them would not be restful for the above-mentioned reasons. Restaurants, cafes, and souvenir shops are at every turn. Civita di Bagnoregio is well-groomed and in reality looks as beautiful as on postcards. You will not get the opportunity to investigate the inside of abandoned houses (as in Pompeii or Herculaneum), because every one of them has a legal owner and a good lock on the door. Some houses with a magnificent view of the precipice are even put up for sale. Are they in demand? Well, what do you think, if half of the house hangs over the cliff? 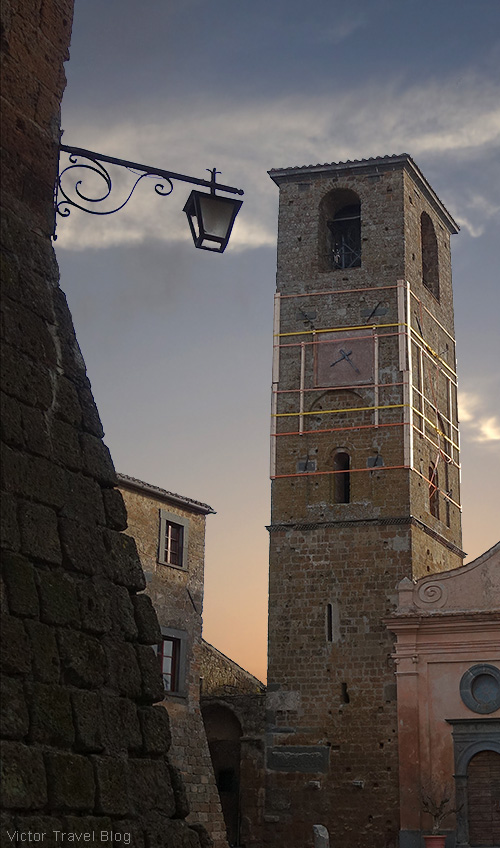 At 8 a.m., the “dying city” showed some signs of resurrection. A sweet old Italian lady went out onto her balcony to water flowers, three builders worked with hammers repairing something in the neighborhood of the closed cathedral, a tiny but very noisy tractor passed by. Thus, almost completely alone, we explored Civita di Bagnoregio inside and out, and even made an attempt to descend down to the valley along a still noticeable, but already unused path. Once, people kept their cattle there. Now, there was only old rubbish. Nothing interesting. The city is so small that we were back in its center at 9 a.m. 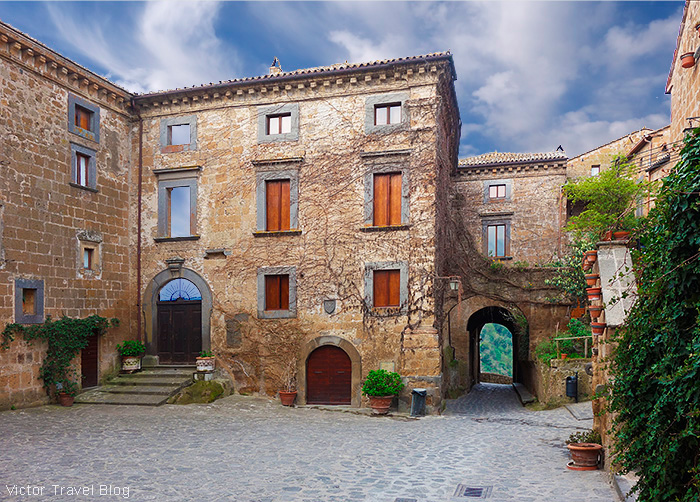 Not one cafe was open yet, and we went back to the bridge and car park without our usual morning cappuccino. Well, it is logical to assume that nothing is open here until the ticket officer takes his post on the bridge. It was still empty and again we were not able to pay for our visit to “la citta che muore.” Now you know at what time you should come to Civita di Bagnoregio, if you are on a budget.

Since the acquaintance with the city ended much earlier than planned, the question arose: where else to go? Moreover, we needed an Internet connection. I manage my microbusiness through the Web, and there are days when I need to contact my manager several times a day. The easiest way is to stop at the nearest cafe. That day was just like that. We found Wi-Fi, or rather an open cafe, next to the parking lot. The signal was excellent.

“Two cappuccinos, please, and a glass of Orvieto Classico for the lady.”
“Only for the lady?”
“Unfortunately, yes. I am at the wheel.”

Orvieto Classico DOC, “liquid gold,” the most famous local wine, deserves a separate story. This is one of the oldest wines in Umbria. It is said that the Etruscans began to produce it. Well, of course…. Everything in these places is connected with the Etruscans, and it is not unusual to hear “we are Etruscans, not Italians.” Back to the wine. White Orvieto is composed primarily of Grechetto and Trebbiano, and a blend of Malvasia, Drupeggio, Verdello, and Canaiolo bianco grapes. It has a pleasant floral aroma and a special slightly tart taste.

The Romans quickly appreciated the drink and began to take it out of Orvieto for the Pontifical Court. Interestingly, this wine was used as a means of payment during construction of the famous Duomo di Orvieto. Probably this is why it is called “liquid gold.”

The main treasure of the Duomo di Orvieto is Capella Nova of San Brizio. The frescos by Luca Signorelli are considered one of the best creations on the topic of the Last Judgment and the Apocalypse. The world of the masters of the Renaissance was very small and the rumor about frescos reached the ears of young Michelangelo. He visited Duomo di Orvieto and was impressed by the masterly work of Signorelli. Three decades later, Michelangelo created his Last Judgment in the Sistine Chapel of the Vatican.

Having finished with my business, and Irina with Orvieto Classico, we thought about where to go. Usually, development of routes is Irinas job, that’s why we call her Navigator. There were two options. On the way to Civita di Bagnoregio, we passed by Montefiascone, a pretty town on a tuff hill. We could go back and explore it; however, we decided to go further, to Viterbo, Lazio, the city frozen in the 12-13th century as people write in the Internet. After one hour, we were in Viterbo.

We are on the way to the old city center. I need the Internet. A cafe.

“Do you have Wi-Fi?”
“Of course.”
“Please, one cappuccino for me and a glass of Orvieto Classico for the lady.”

We go further. There are very few Italians around. “Are we in Tangier or still in Italy?” asked Navigator. The old center. Primitive. Not interesting. I need Wi-Fi again. A bar. “Please, a glass of Orvieto Classico for the lady.” We continue to explore Viterbo, periodically going online. By lunchtime, all business issues were resolved, Navigator was fairly tipsy, and we went back to Orvieto.

Unfortunately, I can’t recommend Viterbo to you. The city is not interesting.

In the evening, we sat in our favorite tiny wine cafe in Orvieto with the last glasses of Orvieto Classico DOC for this day (a strange thing: Navigator was not the least bit tired of the wine) discussing tomorrow’s trip to a place thats unusual and little known even to Italians – La Scarzuola. 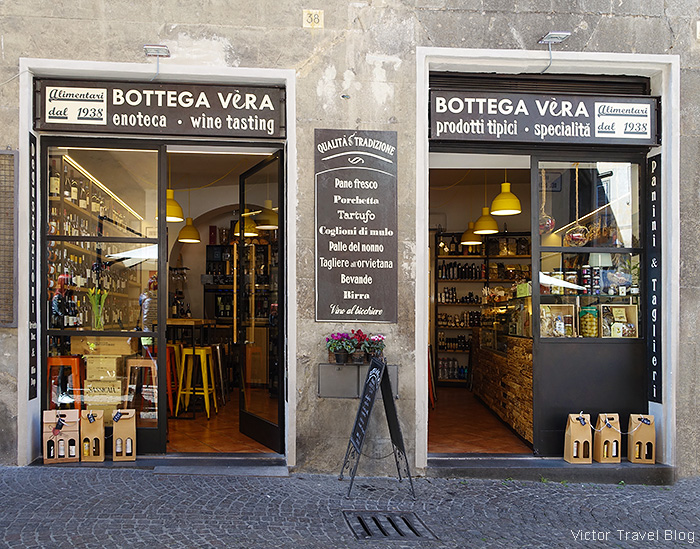 Hadrian’s Villa, Villa d’Este, and Tivoli are Three Different Planets! The Last is the Worst!
Journey to the Kingdom of the Dead in Grotte dell’Angelo or One Cave in Italy
What to Visit: Naples in Italy or Naples in Florida?

« The Annual Family Holidays in England
The Traditional Village of Stanisici or Life Is a Miracle in the Balkans »
%d bloggers like this: