Every morning, an old Bavarian wakes up in his tiny, but comfortable flat near St. Mangs Abbey in the old part of Fuessen, Bavaria. He drinks a strong black coffee that he always buys in Montenegro during summer vacations. Unfortunately, his beautiful Bavaria doesn’t have good coffee. Then he goes to stroll along his favorite river, the emerald river of Lech, a wonder of Fuessen. Why emerald? Because its water is emerald green.

During his life, he travelled a lot and saw many countries, rivers, seas, and even oceans. Several corners of the world can boast of lakes, lagoons, or gulfs with emerald water, but all of them are located too far from his favorite piece of the world, Bavaria. The nearest place is Plitvice Lakes in Croatia, the second one is Malta. Malta has a tiny emerald lagoon on one of its islands. This tiny lagoon squeezed among the naked cliffs is one of the attractions of Malta, and thousands of tourist visit it every year by special tourist boats. Our Bavarian sees that beautiful water every day while hiking along the Lech. 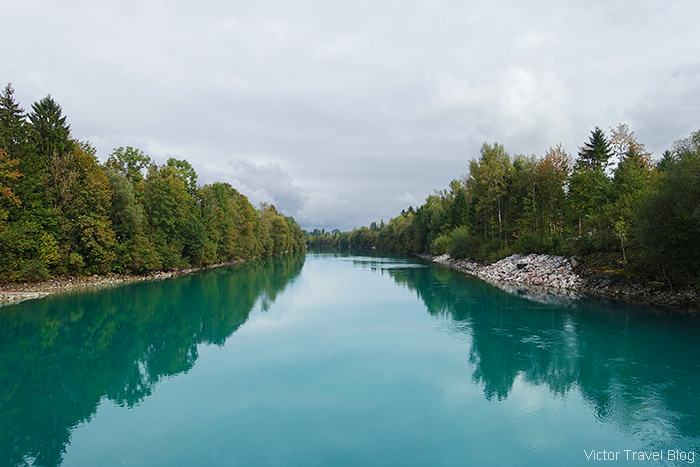 Usually, he goes to Neuschwanstein, the world-famous castle of King Ludwig II, enjoys this wonderful piece of architectural art, and returns to Fuessen. The whole route is 10 km, two hours. This is his daily fitness workout and aesthetic doping. Sometimes, he changes his route, climbs to the mountains to look at Neuschwanstein from above and then goes down to feed the swans in Alpsee, the famous lake near the castle. They say that the Russian composer, Pyotr Tchaikovsky, was so impressed by this landscape that it inspired him to write his famous ballet, Swan Lake. When you stand there on the shore wondering at the tranquility of nature with swans noiselessly moving around, you start to believe that this is true. You feel that you also would have been able to write a ballet or an opera if you were Tchaikovsky.

Do you know that Fuessen is a resort city? Of course, it has no palm trees, oranges, golden sand, or the sea, but it has the purest air, forest, river, waterfall, lakes, and mountains with numerous walking paths for fans of hiking.

On the way home, our old Bavarian will enter a wine bar near the church, Spitalkirche, to drink a glass of good white Mosel wine. After ten kilometers of walking it feels like balsam. To be honest, it feels like balsam even without walking. You know, in Germany they make very good white wines, and our brave hiker will find dozens of brands in this tiny bar. He knows, if he wants to drink Italian or French wines, he can also get them; however, he prefers those from Mosel. Afterwards, he will go home to continue to write his novel, the novel about his long, long life.

Next day, he will repeat his walk along the emerald river of Lech, but in the opposite direction, to Austria. Yes, the Austrian border is close. If you have ever visited Vienna, the capital of Austria, you know that the blue Danube (An der schönen blauen Donau by Johann Strauss II) is not blue at all. It’s dirty brown. But the water of Lech is really emerald. I have never seen anything like it, and I am sure you havent either.

Have you never been to Austria? It is not a problem: just 20 minutes of walking from Fuessen. If you wish, you can visit it every day strolling along the Lech. Then, every time someone mentions Austria, you can say, “Oh, Austria. I know. I have been there many times.”

On the way back, he will get some rest in a small bar on the side of the road and drink a little Jägermeister with the owner. They feel like theyve known each other for a thousand years, and both of them still remember an awful war that changed Europe from a powerful continent into the vassal of one distant country.

Then he will dine in the Italian restaurant in the center of old Fuessen, La Perla Ristorante Pizzeria, Drehergasse 44. He prefers this restaurant because he has been in northern Italy and knows well the real taste of Italian cuisine. In La Perla, waiters even try to speak Italian, but not with him, knowing that his Italian is much better than theirs. Their chef has got the knack for making a good pasta.

Next day our Bavarian will go upstream on the Lech to enjoy the beautiful mountain forest. Again tranquillity, pines, fresh air, lakes, ducks, and many kilometers of forest paths. He knows every one of them, but still is never too tired to enjoy his promenades. What does he think about during his prolonged strolls? What can a very old man who survived World War II and buried all his relatives, even his cat, think about? He prefers not to think, but to listen to audio lessons of the Italian language, because his second favorite corner of this world is northern Italy.

Füssen has its own castle, the High Castle, but this castle is strange enough. Although it is more than 500 years old, its castle features are not real. All the attributes of medieval castles are drawn or painted onto the walls of the simple building. Does it look good? Without doubt, but it is oversimplified. Inside, you will find a museum with the Bavarian State Collection of Paintings and the Municipal Art Gallery which include pieces of art from the late Gothic and the Renaissance periods, all of which were painted by artists from Swabia (southwestern Germany). Apparently, the castle does not have a breathtaking history, and it can’t impress you with bloody historical actions, ghosts, intrigues, or romantic legends.

Our old Bavarian doesn’t like this castle, and he has never been inside it. Why bother, when you have Neuschwanstein and Hohenschwangau so close by? Honestly, being a patriot of his town, Fuessen, he tried to visit the High Castle, but every time he turned back upon reaching its inner yard. Maybe next time, he will dare to enter.

Most of the tourists take the two-hour train ride from Munich to Fuessen, visit Neuschwanstein and Hohenschwangau, and return to Munich, ignoring Fuessen as a separate attraction. Such a shame. Give this town a chance to charm you! Stay there for a couple of nights and retrace some of the footsteps of this old Bavarian: visit bars, restaurants, neighboring mountains, lakes, forest, enjoy the river of Lech, and you will feel the real Germany.

36 thoughts on “The Emerald River of Lech in Fuessen, Bavaria”