“Startling concentration of beauty.” A very bright phrase. I heard it in one of the series of Michael Portillo’s “Great Continental Railway Journeys.” He used it in his description of a famous city. Guess which one? Of course, it was Venice, the city with a startling concentration of beauty. However, I should add, “but only from a distance.” When you immerse yourself into Venice, you start to find some flaws in its beauty: dilapidated houses, peeling facades, street sweepings…. What can we do? This is a city with a very complicated fate.

Do places with flawless 100 percent concentration of beauty exist anywhere in the world? Of course. We found one such place in the city of Rome, Italy. This is the Museo Borghese which is housed in the former Villa Borghese Pinciana. When you pass the ground floor, buy tickets, and go up to the first floor, you find yourself in the kingdom of good taste, luxury, and incredible beauty. Everything is beautiful here: floors, walls, ceilings, paintings, and, of course, sculptures by Gian Lorenzo Bernini. I have already been to many museums of the world; this one was the smallest, but the most beautiful I can remember. 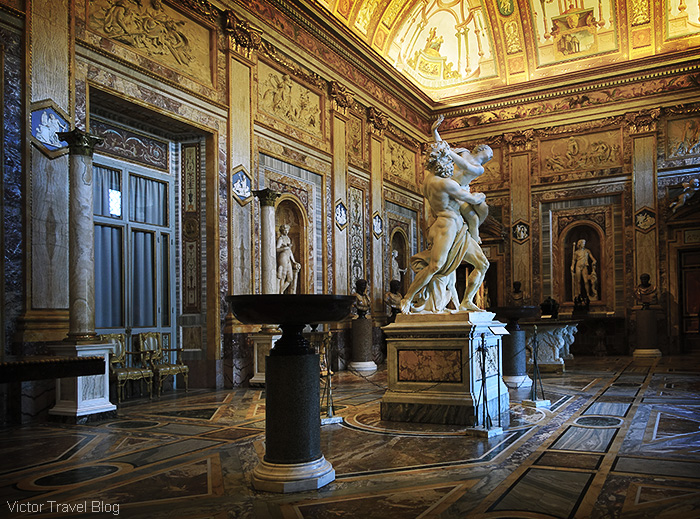 The villa and the collection were created by Cardinal Scipione Caffarelli Borghese. He was lucky enough to be a nephew of the Pope, and among numerous other ecclesiastical positions, he even had a post invented especially for him: the Cardinal Nephew. What were his duties? Trifling: just to receive gifts on behalf of the Pope, and to manage papacy finances. He was excellent at this job, but he also did not neglect himself, or rather his passion—he was a passionate lover of beauty, a collector.

After receiving huge financial levers and power, Scipione Borghese built a special villa for his treasures and began actively collecting all the best works of the world of art, and, history tells us, not always with noble methods, going as far as banal theft. One artist even was jailed because he did not want to sell his paintings to the Cardinal for the suggested price, a very low price, it must be said. That was a common practice of Scipione Borghese. Probably, he agreed with the monk who said, “Finis sanctificat media,” and thus proclaimed the motto of the Jesuit order—”The end justifies the means.”

We can blame him for impropriety and a lack of principles during the collection, but consider where all these masterpieces could be now, if, in his will, Scipione Borghese had not forbidden the collection to be divided?

It is obvious that the Cardinal had a great penchant for masterpieces and talents. For example, he immediately saw a genius in the 20-year-old boy, who would later become known to the world as the great and inimitable Bernini who created sculptures which are impossible to look at without delight. We can say that Borghese made him his court sculptor. A good fortune. Later, Bernini would be a curator of the papal art collection, director of the papal foundry at Castel Sant’Angelo, commissioner of the fountains of Piazza Navona, and the Chief Architect of St. Peter’s Basilica in Rome.

Gian Lorenzo Bernini developed a “new for that time” technique. He polished marble until it seemed to come “alive.” You will immediately see the difference in Bernini characters from their Greek counterparts: they have a smooth and elastic skin (Greek gods and heroes were not particularly fond of wearing clothes). Moreover, Bernini managed to transfer the age of skin of his heroes. Just look at the Aeneas. Aeneas took his father and son out of burning Troy. In the sculptural composition by Bernini, you see three men of very different ages, and you can feel the difference even in the appearance of their skin. Note that this is just marble. Later, this technique was used by many artists, for example, Antonio Canova, but Bernini was the first. 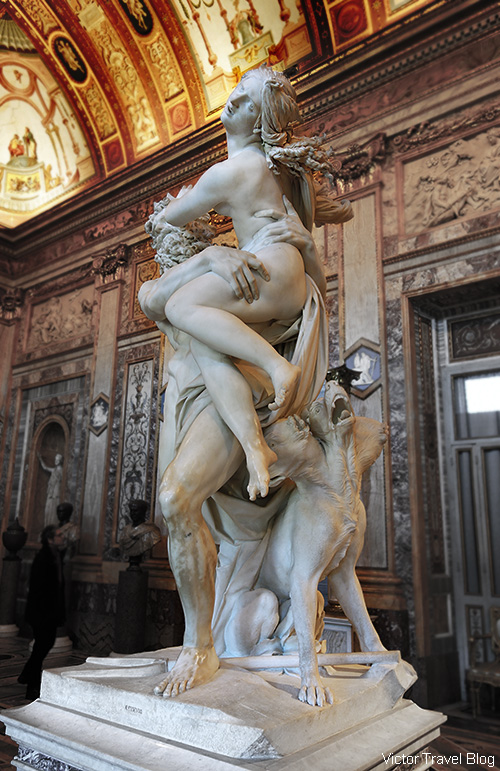 The Rape of Proserpina by Gian Lorenzo Bernini.

For the first time, a woman from high society posed nude for the sculptor and exhibited the finished work in public. At first, society was outraged (women, of course), but it’s difficult to argue against the beautiful female figure enhanced by the skill of the artist. However, note how the mattress and the pillow under her are made. They seem soft.

As it turned out later, Pauline was not only a beautiful and extravagant woman, but also a true friend, at least, to her elder brother, Napoleon Bonaparte. After his fall, Pauline liquidated all of her assets and moved to the island of Elba to support her brother in a difficult period of his life. She was the only relative of his to do so.

Going from hall to hall of the first floor, you will meet Bernini’s masterpieces in every one, and every time, you get an incredible aesthetic pleasure. Soak it up. Maybe it will be the best museum in your life. But to get maximum enjoyment, follow my two tips.

A ticket to Villa Borghese allows you to enjoy the arts for two hours. Visitors, as expected, go to the first floor, then to the second which shows the paintings, and then leave the gallery. But if, after viewing the second floor, you return to the first one and repeat your tour—oh, miracle—you will be alone. Only you and the works of great masters Bernini, Canova, Caravaggio, Titian, Rubens, Raphael…. You will be able to take pictures from unimaginable angles, and no one will disturb you. (At least in the low season. We were there in January). 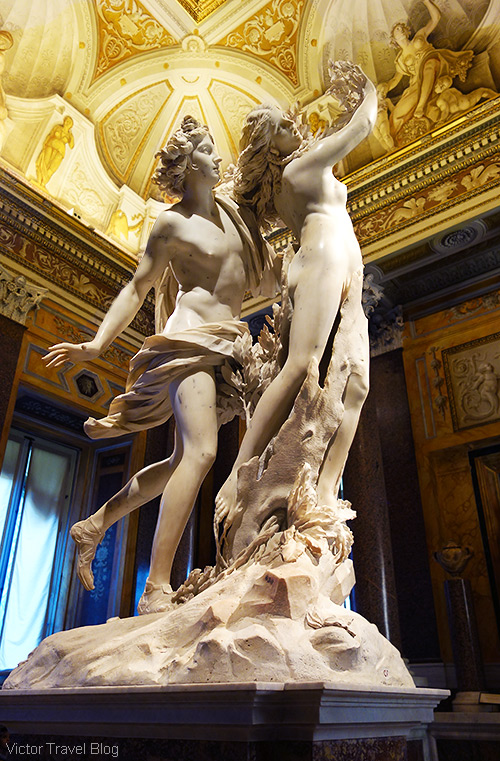 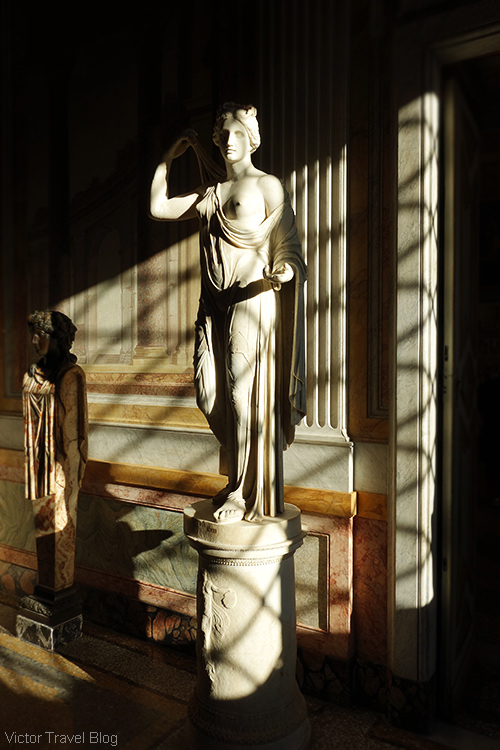 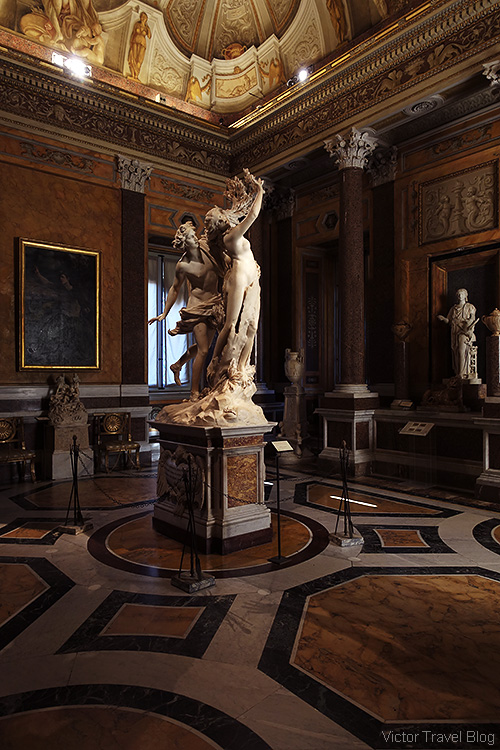 Give your attention to the ceilings. A very original designer solution was implemented in the Museo Borghese: paintings hang here even on the ceilings. No, these are not painted ceilings or frescoes. These are real paintings in solid frames, but located on the ceiling. This gives them a huge advantage: there is no window glare on them. 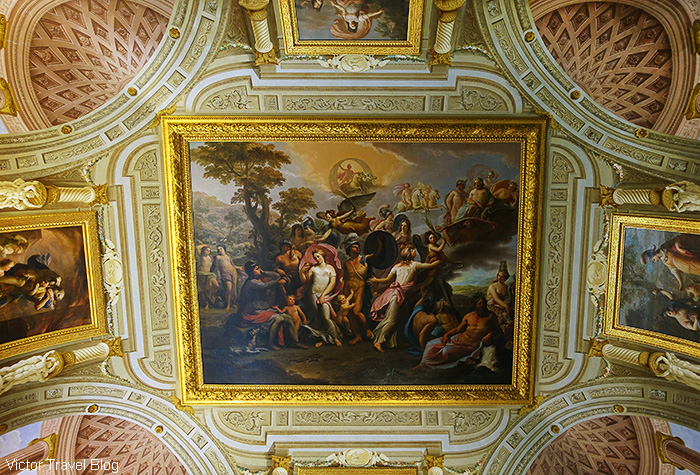 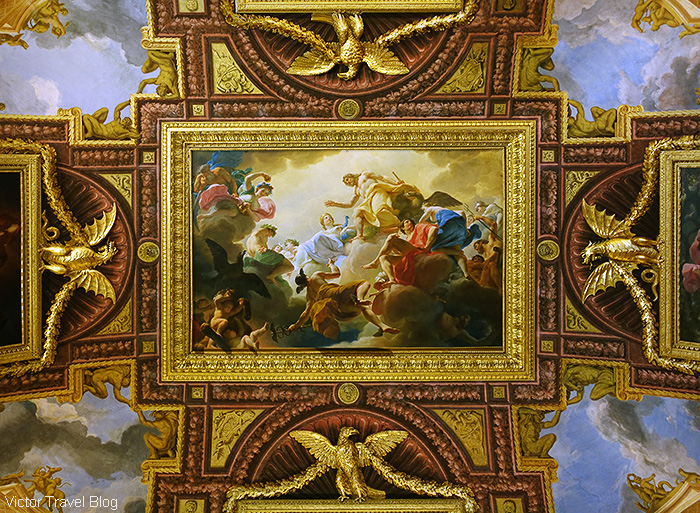 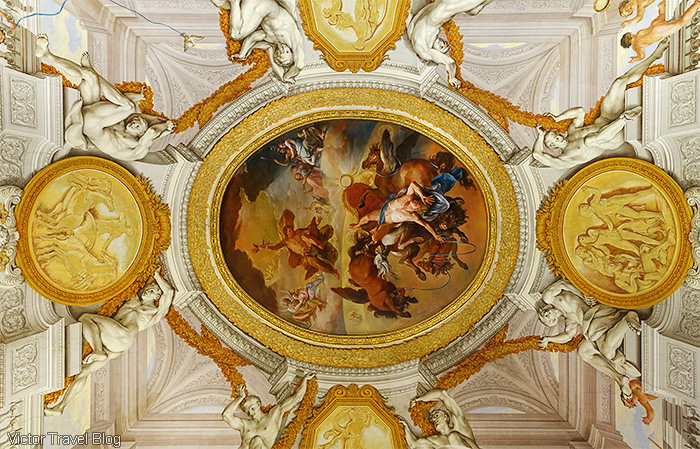 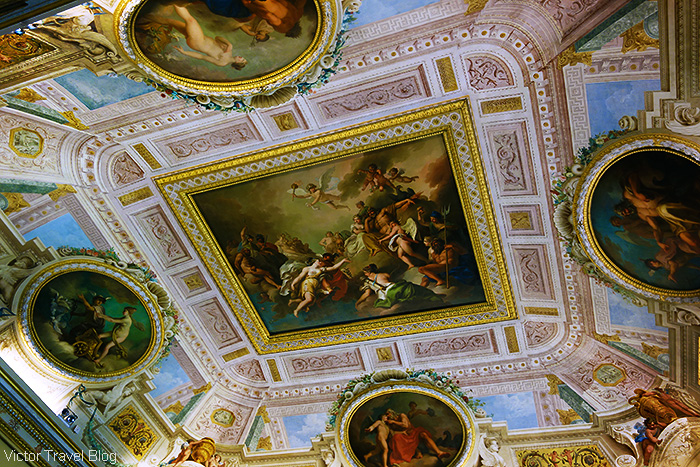 Tickets (more precisely, vouchers) to the Galleria Borghese, Roma, are better to buy online (link) and in advance, especially if you go there in the high season.

The entrance to the gallery is located on the ground floor under the double staircase. On entering, you will exchange your printed voucher for tickets.

The gallery has a small cafe and souvenir shop where you can inexpensively buy one of the original works of Caravaggio…. Joke. Only a copy.

In the Museo Borghese, you can take pictures, but without a flash. 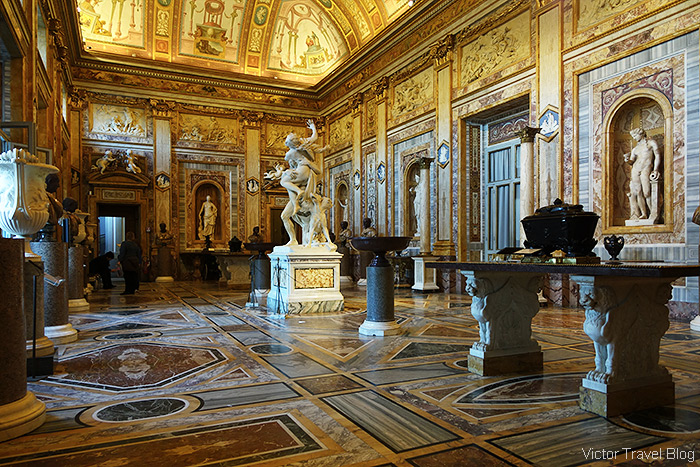 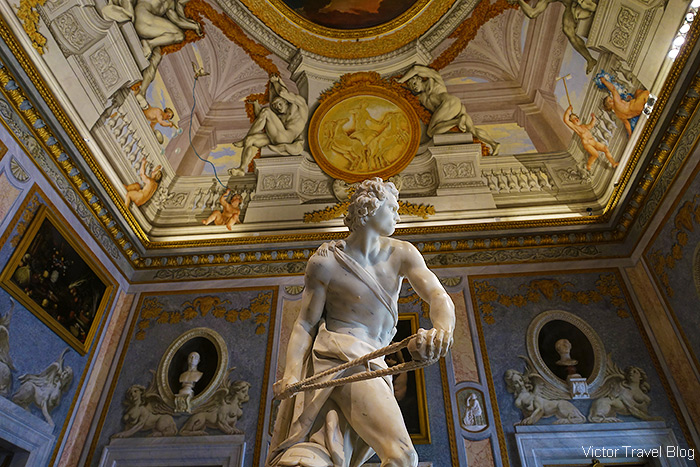 « Undeground Cities of Cappadocia
Gala Dali’s Pubol: the Castle, the Home, the Grave »
%d bloggers like this: