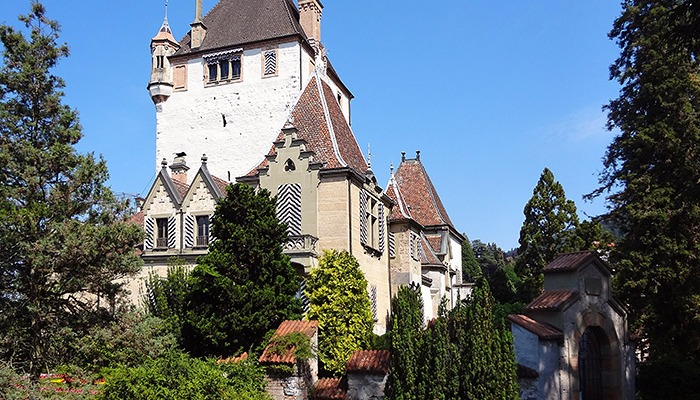 Most fans of ancient castles travel around Great Britain, France, and Germany, but few of them know anything about Swiss castles. Of course, the best things in Switzerland are nature—wonderful mountain peaks and lakes, endless forests, and flower meadows—and surprisingly low prices… The latter was a joke. But I think it’s fair to say that dozens of well-preserved castles perfectly complement the Alpine landscape.

As a rule, tourists visiting Switzerland know only one of them: Chillon Castle. If you came to Lake Geneva, you would certainly be driven to Montreux to see the famous castle which was the setting of some of Lord Byron’s poems. If it will be your first castle ever, go and look at it; if not—it will be like visiting Neuschwanstein Castle in summer. The impression will be as if you are on a permanent demonstration for higher wages, and the demonstrators will be mostly Chinese. We decided not to visit Château de Chillon, but to enjoy two completely different Swiss castles instead: the majestic Gruyere Castle and the postcard Oberhofen Castle.

I remember one more candidate. Checking pictures in Pinterest before the trip, Irina found a very unusual shot, and our list was complemented with a third Swiss castle: the Valere Castle in Sion.

In Gruyère, we hiked the whole vicinity, tested all kinds of quiche in the local restaurants, and got enormous pleasure out of the annual medieval festival of St. John in the Gruyères Castle.

Then it was time to take a trip around the country.

The picturesque lake, Thunersee, decorates the Canton of Bern. The fairy Oberhofen Castle is located on the shore of the lake. We dedicated the whole day to it.

The 100-km trip from Gruyère to Oberhofen Castle took several hours, which was a surprise for us. Yes, we trusted our GPS navigator, which led us through crazy serpentining mountain roads where no one in their right mind would drive, but there was also a plus: we saw the German part of Switzerland and felt the difference. 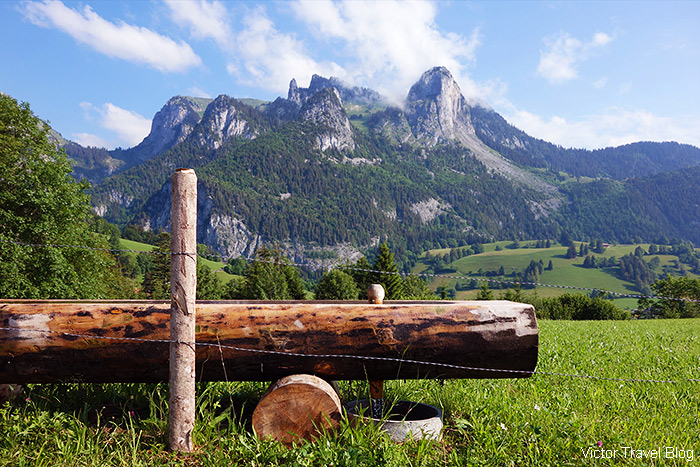 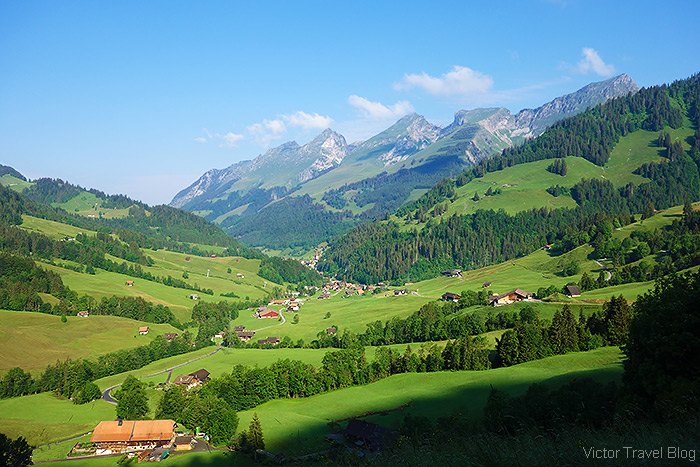 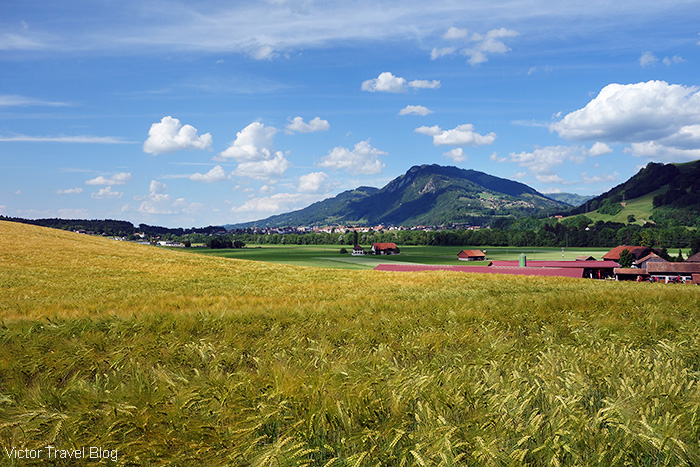 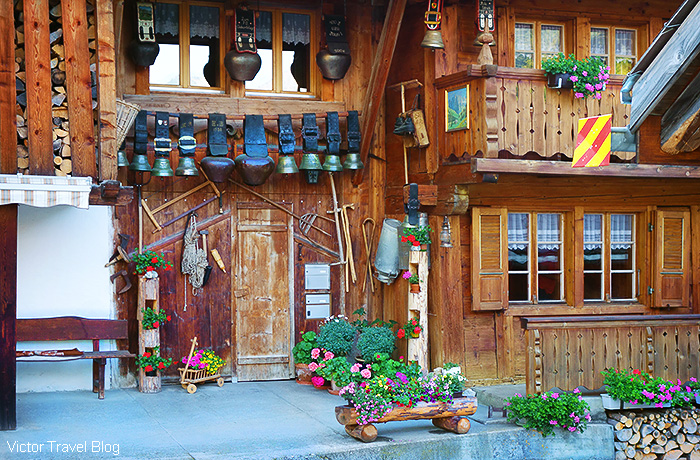 On the other hand, we felt it was better to trust the GPS than repeat the confusion we experienced during the trip to the Peyrepertuse Castle in France. After visiting that castle we decided to ignore the directions of the GPS navigator and drive according to our map and intuition. Outcome? After a one-hour journey along the winding mountain roads of Languedoc we found ourselves back at the starting point of our without-navigator adventure, near the Peyrepertuse Castle.

The most spectacular views of the Schloss Oberhofen are from the lake. Smooth water under the castle, mountain peaks above it. Not once, was Oberhofen Castle, the perfect blend of elegant appearance and important strategic position, a “bone of contention” among the authorities of the Canton of Bern, the royal house of the Habsburgs, and heirs of the founder of the castle, the Duke of Eschenbach. 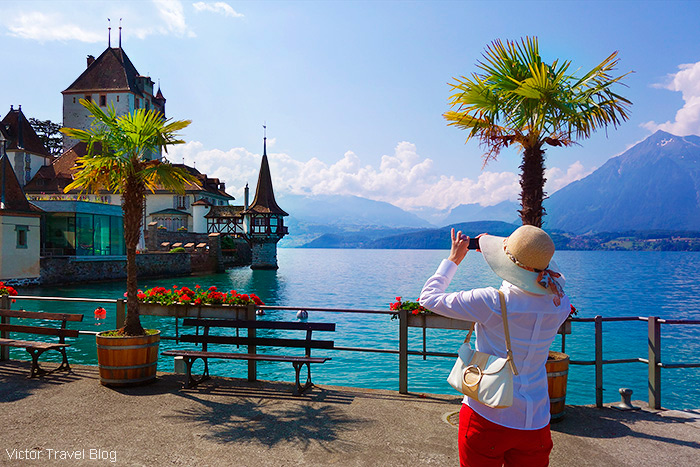 According to the official version, the history of the Schloss Oberhofen is calculated from 1130. Of course, not all the historians agree on this date, and I also think it fair to say that the “Castle on the Lake” appeared later. In the ancient chronicles, 1130 is set as the year of foundation of the monastery, around which the village of Oberhofen am Thunersee began to grow. The monastery was built half a kilometer above the present location of the fabulous Oberhofen Castle, but not even its ruins were preserved.

The oldest preserved building of the Oberhofen Castle was built only a hundred years later, at the beginning of the 13th century on the order of the ruler of the land, the Duke Walter von Eschenbach. The tower-dungeon, 11 to 12 meters in diameter with two-meter walls, was able to withstand the attack of any weapons of that era. I emphasize: ANY, because several centuries remained before the invention of explosives, and nothing else could break such a stone giant. So, this tower has stood here for nearly nine centuries. 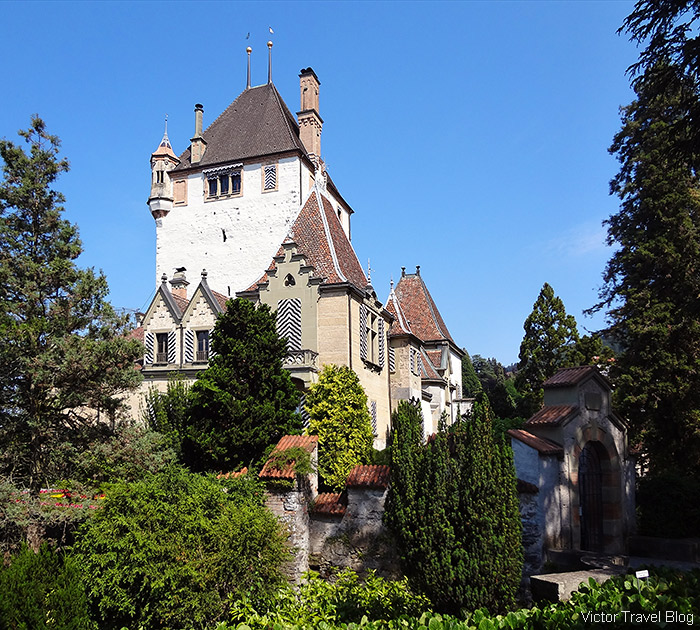 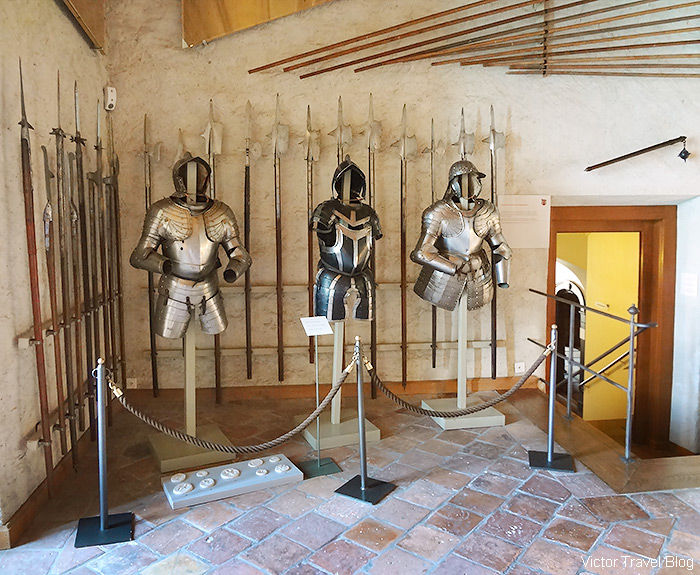 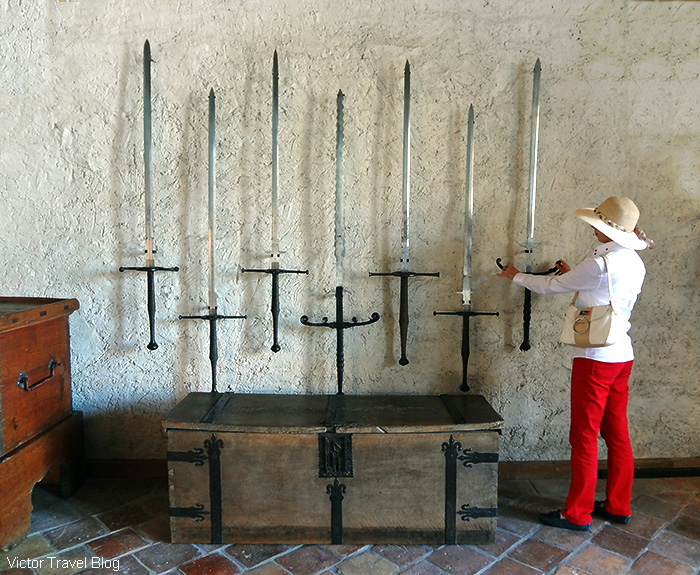 The period of greatest prosperity of the castle came in the 18th century. In those times, the tower on the water was added, which later became the hallmark of Switzerland. The tower has a single room, intimate and cozy. Quite possibly, it was a room or boudoir of the mistress of the castle. The Oberhofen came under new ownership at the beginning of the 19th century. Counts of Pourtales, an influential family, loved their new home. They gave it the fabulous view that we are all used to seeing in the pictures of Switzerland. 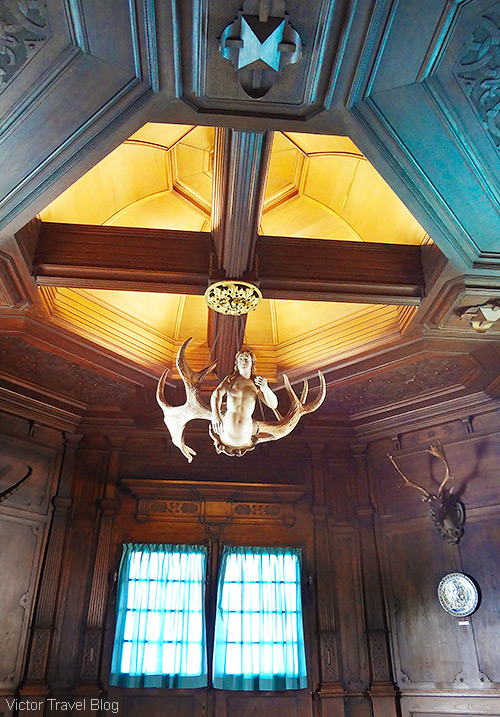 Years passed. The First World War broke out in Europe and affected many countries, cities, and people. The Oberhofen Castle also fell into disrepair. Surprisingly, the castle was given a second life thanks to the US citizen, William Maul Measy, who acquired it in the 1930s. The successful American lawyer never lived in Switzerland, but did a lot to restore this impressive monument of architecture and history.

Any guide will tell you that the castle has a unique collection of paintings whose cost is impossible to calculate. Maybe it would be so, if it had the Isleworth Mona Lisa presumably by Leonardo da Vinci (the youngest of the “three sisters”) which was shown to the public in 2012 and then returned to the safe of one of the Swiss banks. However, it maybe shown again.

However, I do not think that the secret of Oberhofen Castle’s popularity lies in its expensive art collection. The point is that here you will not find velvet ribbons and “Do Not Enter” signs blocking your way, and this is very important because you have the chance to feel the building. Restorers are constantly working in the castle, but you will not even notice their presence. An attendant told us that everything is restored at night. How often do you encounter such concern about tourists? In addition, the castle, built almost a thousand years ago, continues to be functional today; the sacraments of baptism and marriage take place in its chapel.

Unfortunately, we have not visited the Swiss castles crowning two vertices in Sion whose picture prompted us to go to Switzerland.

It is not easy to find the motivation to take a journey through half the country for the sake of the next ruins, especially if you see the Gruyère Castle from the balcony of your hotel room in the morning and in the evening. I would say the Gruyère Castle impressed us even more than the Schloss Oberhofen, and it seems we are not alone in this. 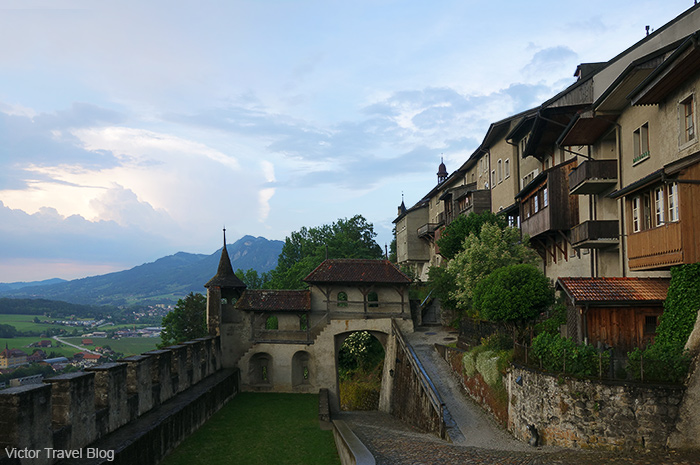