The Best, but Cheapest Trout Farm in the World

Irina and I are not cut out for fishing. This is a fact. We are too lazy and impatient for brook trout fishing, but dinner on a trout farm is quite another matter. In other words, trout fishing season is not interesting for us. The main thing is to know the right “fishing spots,” and simple, rustic food often tastes better than that which is served in expensive restaurants. This time, we went to the Balkan Peninsula, to Bosnia and Herzegovina.

You probably know very little about Bosnia. Most likely you have no idea where this country is located, unless you are a US military pilot who bombed Yugoslavia in the 90s. We are well acquainted with southeastern Europe, and often visit the Balkan Peninsula. Bosnia has even fewer attractions than the neighboring countries, but, as a rule, its rustic food is excellent.

Half the country is covered by wooded hills with dozens of mountain streams and rivulets. Here, each village has its own source of mineral water. The industrialization of this part of Europe has a vague future, therefore earth and water are clean. Perhaps, that is why brown trout live here, and brook trout fishing is very popular. Generally, people come here for the clean air, pure water, and delicious meals, such as only your mom could cook. 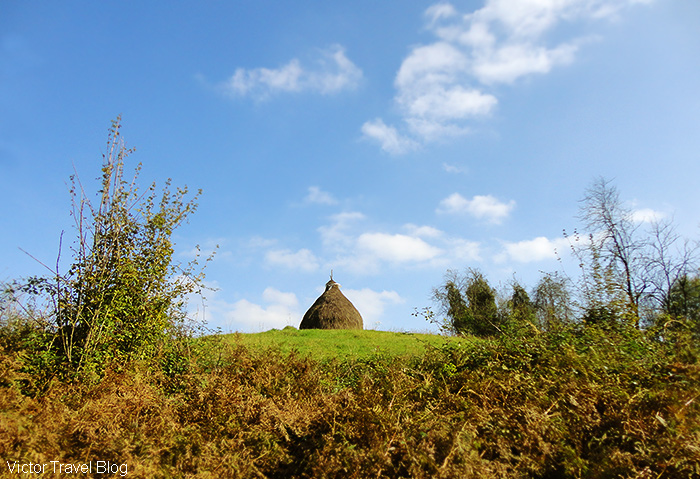 This time we traveled with friends and, of course, would like to surprise them. One of the ideas was to visit a real trout farm. For many reasons, our trip to Bosnia was postponed a few times, and was realized only in October, when the tourist season had already ended. Because of this, the door of the familiar rustic tavern was closed. Having seen a man chopping wood nearby we asked him, is there a working trout farm nearby?

“The best is Luis’ Farm. Continue along this road for about three hundred meters, then turn left, then to the first bridge and turn left again, and go a further seven kilometers along the road up the hill.”

Five minutes later, without incident, we passed the bridge. Then the road went uphill. I would say that after the bridge, it simply ended, and dwindled into a tortuous trail climbing up the hill. A meeting with another car here would have been a problem.

A forest on the one side, a deep gulf on the other—Irina hates such roads. The respectable rented Volkswagen Passat CC also did not like it. Fortunately, a couple of times, we saw signs with arrows “To Luis.” At least, we knew that we were going in the right direction. Then, the trail also ended and we saw a bearded man who was changing a tire of an old jeep.

“You are on time. As they say, God help us. Now, we will change the tire in a blink,” said he.

“OK, but we are looking for the trout farm ‘Luis’.”

“Just kidding. I am Luis. Come in the yard.”

The trout farm was picturesquely situated on a hillside. A summer kitchen and pools with flowing water for adult and young trout was below. A stone bridge, leading to the gazebo under the apple trees, spanned a small stream. Even higher up the mountain, there was a log house/restaurant where you could stay for a couple of nights.

This year, October was foggy and cool, so we decided to stay in the main house by the fireplace. Then the owner came with the first treat. In Bosnia, you’ll get a homemade plum brandy in any home. A five-liter bottle of plum brandy stood on the bar counter. Firstly, the owner poured a little of the drink for everyone into nice authentic glasses.

“Well, my dear guests, be healthy. God bless us.”

The glasses were so interesting that everyone drank, those who drink alcohol and those who don’t. As a snack, Luis offered a homemade cheese. Perfecto. The consistency of the young cheese resembled an Italian mozzarella, but it was kept in olive oil with chili peppers, herbs and olives. Irina immediately found out that it was not possible to buy a bit of cheese to take away home. Luis has only one cow, therefore he makes a very limited quantity of cheese, but the flattered host willingly shared the recipe.

I found myself thinking that we had been directed to a great place to surprise our friends who came to Bosnia and Herzegovina for the first time. A little confusing was the fact that there was no menu or prices, only a sign saying “We have no change” above the bar counter. The owner of the trout farm was undoubtedly eccentric. Luis made a show out of dinner, and if you are prepared to play along, lunch would be enjoyable for both.

After a strong aperitif, the owner invited us to taste the national dish, Bosanska cicvara, which as he said without false modesty he prepares better than anyone in Bosnia. The name of the dish was not known to us, so we unanimously agreed to test a mysterious cicvara, and without an invitation followed the cook to his summer kitchen.

Of course, we could stay by the fire, because we had a fridge with beer, domestic wine, brandy, and cheese at our disposal, but curiosity outweighed all of these traditional pleasures of life. As it turned out, we went to the kitchen not in vain. Before cooking a cicvara, Luis decided to bake a rustic bread for us.

Then I thought that our lunch might be quite prolonged, and dusk was approaching fast. The way back from the trout farm in the mountains would not be very pleasant in the dark; however, to our surprise, the process of baking a bread took no more than fifteen minutes. Luis kneaded dough and added soda water (!) to it. Then he set a strange iron construction on the hot coals, a pan with the dough on it, covered it with a lid with hot coals on top. “It will be ready in 10 minutes.” 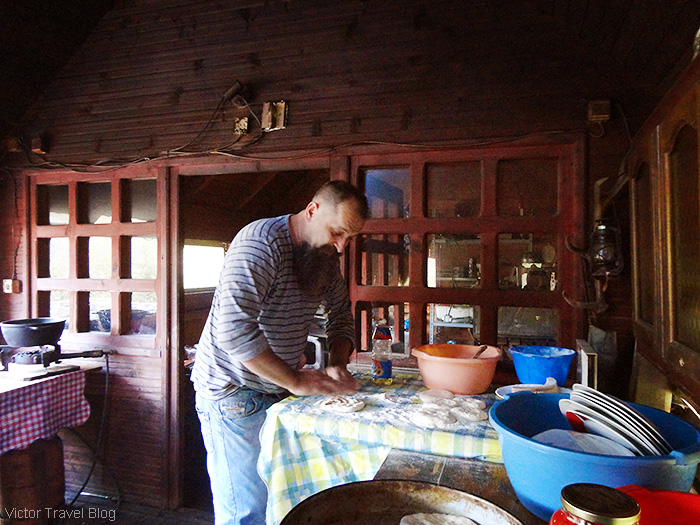 Luis, the owner of the trout farm. Bosnia. 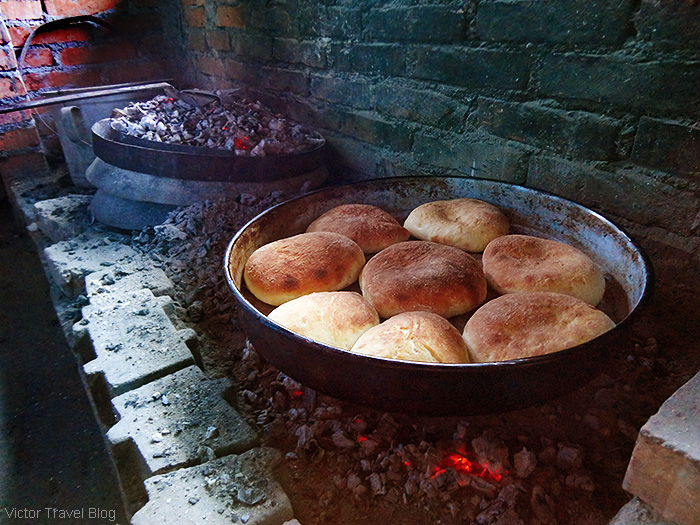 Needless to say, none of us had ever seen such a method of making bread. Meanwhile, Luis continued to perform miracles. The bread did not have time to cool down, when the bearded chef had already laid out Bosansku cicvaru onto plates. It turned out to be a local variant of corn porridge.

We overpowered Cicvaru with incredible difficulty. The portions were huge, but the dish was so delicious that it was impossible to stop. After that, we did not want to sit in the warmth near the fireplace and decided to take a walk in the fresh air. Luis found our idea of a walk in the mountains wonderful. During this time, he could catch some trout and clean it for us and the foresters who have to come to dinner.

There were no longer thoughts of food, even about the brown trout for which we came here, and our group wandered off among the mountains. I found Irina about an hour later sprawled on the wet grass. This “photoartist” discovered October flowers reminiscent of spring crocuses, and tried to photograph them from all angles. 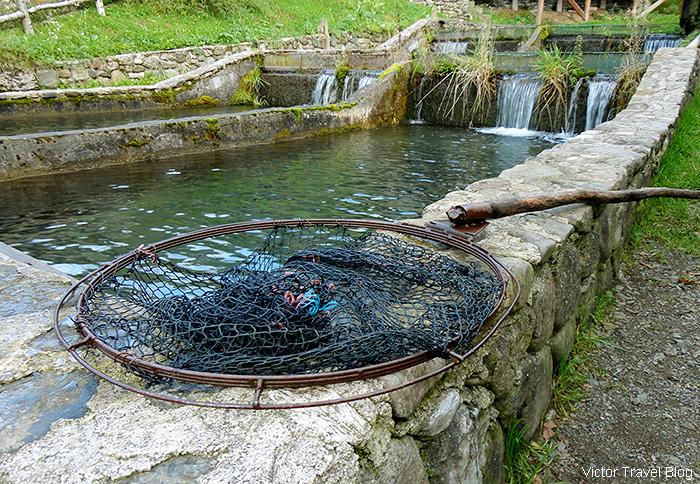 Unfortunately, at this hour, we managed to miss another photo story: Luis managed to catch, clean, and bake trout for us, two each!

“Dear guests, you are welcome to the table.” 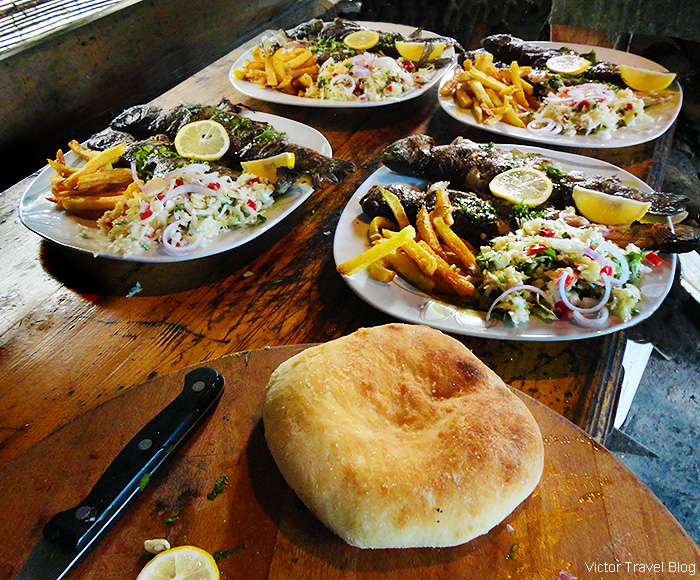 Two big fish have been supplemented with a heap of salad and fried potatoes. At such moments, I always think about one thing: how not to offend a host? We were rescued by the arrival of foresters. After tasting the brown trout, we honestly said that after cicvaru we could not eat as much fish and asked to have it wrapped to take away.

“It’s getting dark. There would be no small distance home. Perhaps, a cup of coffee and the bill, Luis.”

The owner squinted and after a short pause announced the amount of the bill—100 Bosnian marks—and went to make coffee. The account shook me. The same look of surprise was on Irinas face. Fifty euros for plenty of food and unlimited drink for five adults! This time I left a 20% tip and did not regret it for a second. As a gift, we got a liter of house white wine.

“I think you will return to my trout farm.”

“It would be a small wonder if we didnt, Luis. Thank you.” 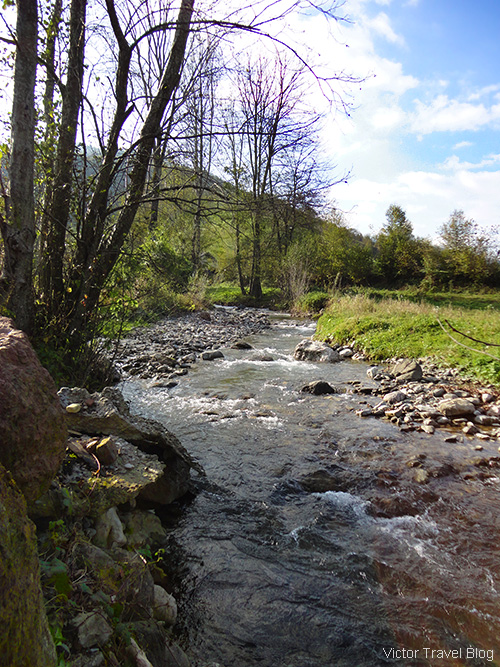 31 Responses to “The Best, but Cheapest Trout Farm in the World”

« Bayon: The Most Mystical Khmer Temple of Cambodia
Castles in Switzerland: Oberhofen Castle »
%d bloggers like this: