The history of our marine voyage from Rhodes to the ruins of the ancient Greek city of Ephesus waited an unusually long time—more than a year—for its turn to be written for this travel blog. Something prevented its birth, but I never thought it was connected with the topic of sailing superstitions.

While I was thinking about a description of our expedition to the Bayon temple in Cambodia, my insurance company sent me a letter asking me to fill out their new survey on sailing superstitions. I don’t believe in superstitions at all and in sailors’ superstitions in particular, but I know some of them. For example, my blogger friend Anneli wrote me that her husband, Captain Gary, a real seadog and fisherman, never opens a can (food or whatever is in it) upside down. He thinks it stems from the idea that a tin can is a vessel of sorts, and you don’t want to put a hole in the bottom of a vessel, or you will sink.

Moreover, I recalled that our yacht team—Irina, me, and skipper Alexander—had a very interesting conversation on this topic on the eve of our leaving Rhodes for Ephesus, Turkey. We had dinner in one of the numerous little taverns of the city of Rhodes, and after a bottle or two of the beautiful Rhodes white wine, our conversation turned to sailors’ superstitions and what seafarers did and continue to do to dodge bad luck. That evening, we learned a lot of very interesting things, but the most striking was the fact that our team had no right to set sail at all!

“Only one woman is allowed on board: the wooden topless statue on the bow. Her bare breasts shame the stormy sea into calm, and her open eyes guide sailors to safety.”

“Hmm. I suppose, Irina wouldn’t want to play the role of such a statue. How we can work around this obstacle?”

“We can throw Irina overboard in case of an extremely strong storm.”

“Do we have more humane methods to dodge bad luck?”

Irina agreed. The next two days, she rubbed the mast to a high gloss every morning and sometimes sat on the bow of the yacht with open eyes (but not topless), and thankfully, the wind helped us to reach ancient Ephesus in Turkey quickly and without trouble. 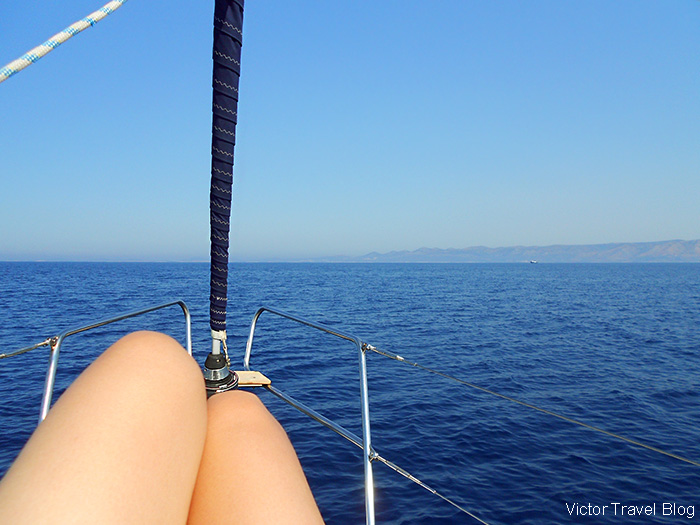 According to the legend, the city of Ephesus was founded by Androcles, son of the Athenian king. The Delphic Oracle told him that the fish, fire, and wild boar would show him a place for the new city. During the search for this place on the coast of Ionia, Androcles saw fishers who were frying fish over a bonfire. Suddenly, a nearby bush caught fire, and a wild boar popped out of it.

Can you imagine a wild boar quietly sitting in the bush and waiting for its ignition? Moreover, what kind of bonfire ccould those fishers have lit, to burn up even the neighboring bushes with a boar sitting there?! By the way, all that happened in the middle of the raw swamp! Truly, the author of this legend had a great sense of humor.

So, the place for a new town was defined; all that was left to do was to think of its name. Of course, a woman took part in it; moreover, that was Amazon. Amazons were women who somehow got along without men. Women without men: what nonsense; and Androcles decided to correct the violation of the order of natural things. Judging by the consequences, one of the Amazons, named Ephesia, agreed to fix the problem, responded to his love, and forever inscribed her name in history—the new city was named in her honor, Ephesus. I hope that by becoming the first king of Ephesus, Androcles did not forget the responsive Ephesia.

According to another legend, the city was founded by Amazons and named Apasas until Androcles came and captured it. Apasas gradually turned into Ephesus. 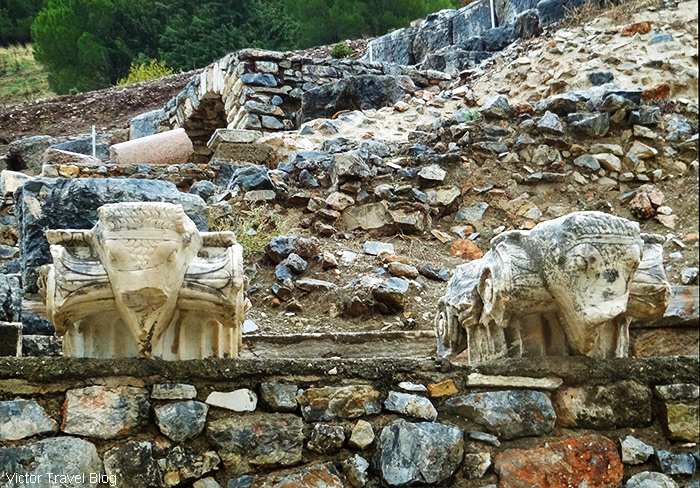 There is one more name connected with Ephesus that today is familiar to everyone—Herostratus. This guy wanted to be famous at any cost and succeeded in this endeavor: in 356, he burned the main temple of Ephesus—the Temple of Artemis, one of the seven wonders of the world—and proudly stated this at the trial. The court ruled to erase his name permanently from history, but it did not work. People in every part of the empire were discussing the strange verdict: the offender was not executed, the court only decided never to mention his name anywhere. Sure enough, his name was on everyone’s lips, and it still lives as a symbol of idiocy.

It was a gorgeous, marble temple built in 550 BC and surrounded by a double colonnade of 127 columns decorated with superb bronze statues. The Temple of Artemis was also unique due to the fact that it was built on a swamp and stood on a bed of charcoal and wool. (Do you understand now why such a powerful marble temple burned so easily?) Its architect, Chersiphron, believed that in this way he would save the temple from an earthquake, and he was right. Archaeologists believe they have found the remains of the burned Temple of Artemis, but not everyone is agreed on it.

Many legends about the life of the Virgin Mary are connected with Ephesus. It’s believed that she lived there the last years of her life. Five kilometers from the south gate of Ephesus, the important place for Christians, Meryem Ana Evi (house of Mary), is located. This is the place where the mother of Christ supposedly lived from 37 A.D. to 45 A.D. and from where she has gone to another world. According to the legend, before his death on the cross, Jesus asked St. John to take care of his mother. St. John moved the mother of God to his native city of Ephesus and put her at the foot of the mountain in a hut surrounded by dense forest where she spent the last years of her life.

I suppose you have seen many very bright photographs of Ephesus with blue sky and numerous tourists among the ruins. As usual, we were “very lucky,” and took non-standard shots—Ephesus in the rain. Maybe that was a punishment for ignoring one of a sailor’s superstitions. 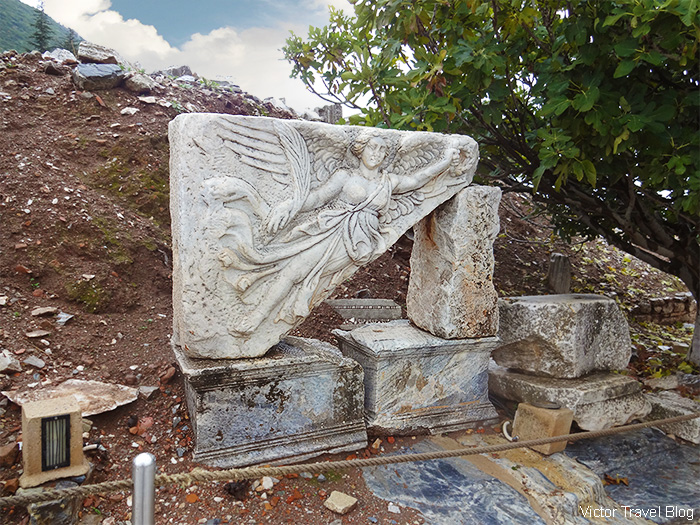