What do you know about Russia? Moscow and St Petersburg, the Red Square and Peterhof, the Kremlin and the Winter Palace? That’s all? Boring. We wanted to find something unusual near Moscow, and since we love abandoned homes, we googled and found an abandoned Russian mansion and abandoned soviet aircraft in one place.

The former Bykovo airport is located just 32 kilometers from Moscow, Russia. It was the second airport built in the Soviet Union. Right in front of it, we found the slowly falling apart historical estate of Mikhail Izmailov in the village of Bykovo. It’s a pity, but it seems after 50 -100 years, only the unique church by the famous Russian architect Vasili Bazhenov will be preserved in the old estate where Russian Empress Catherine the Great liked to drink a cup of tea.

The tsar’s village of Bykovo, located on the left shore of the Moscow River, was mentioned in the chronicles already in the 14th century. Russian tsars always owned the best lands, as in every kingdom, but if these lands lay near the capital, a royal citizen could obtain them only as a reward for great services. That was the case with the now-abandoned estate in Bykovo.

As we know, the most famous Russian queen, Catherine the Great, came to the throne in a way not particularly pleasing to God. In fact, she killed her husband. In those times, Mikhail Izmailov served the Russian Emperor, Peter III. When Peter III was killed by conspirators on June 6th, 1762, Mikhail Izmailov immediately went over to the side of Catherine. For this, she bestowed him with the Order of St. Alexander Nevsky. Later, he received the title of the governor-general of Moscow and the extensive lands to the south of the second capital as well.

The Empress paid her favorites generously for their assistance in the palace coup. That was the beginning of the history of the unique Russian estate in Bykovo. Its owner, Mikhail Izmailov, spared no expense. He invited one of the most talented architects of that time, Vasily Ivanovich Bazhenov. Bazhenov made a courageous decision to build not a typical Russian mansion, but an elegant English building. Moreover, he started to build not just a house, but the park ensemble which consisted of a church, a park, several ponds, and something very unusual for the Russian climate: a winter botanical garden.

The new house was built on piles driven into the artificial hill, the earth for which was taken from three pits which peasants dug by hand. One attraction of the park was the alley of black roses bought in France. One of the many exotic plants delivered to the botanical garden was a 200-year-old cork tree.

Made of red brick, the count’s house still sits on the hill at this time. Beautiful cariatides support its amazing balcony with the owner’s coat of arms still visible above it. 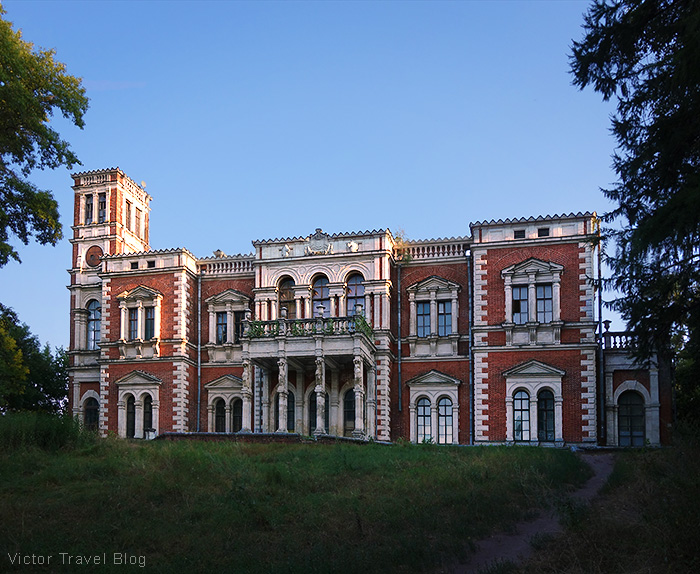 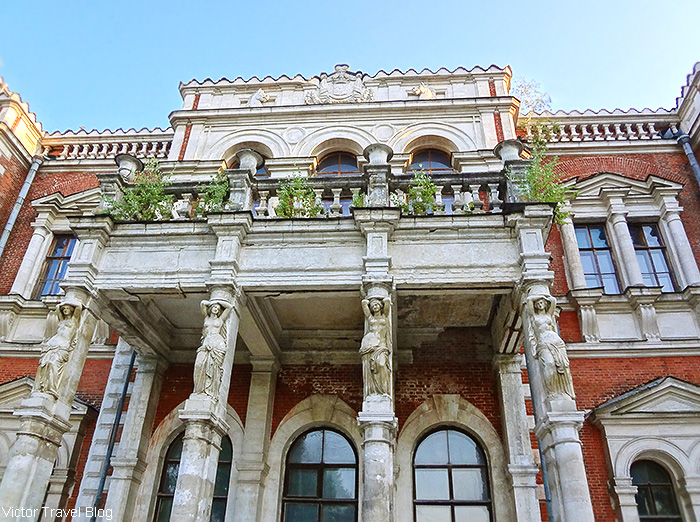 It is impossible to get inside, but you would not have wanted to, if you had known that it was a tuberculosis hospital. We came here very early with some vague hope. A man came out of the main entrance and said the tuberculosis hospital is closed, but tuberculosis bacilli can live for 20 years, and there is nothing to see inside, since before it was a hospital, it was a juvenile detention center.

Today, the old house is almost abandoned and slowly falls apart. There are no traces of the rose alley and the botanical garden. In the park, overgrown by weeds, only two ponds are preserved, one of which has a rotunda built by Bazhenov for the leisure of the estate owners and guests.

The second feature preserved from the 18th-century construction, and the main attraction of the estate in Bykovo, is the two-floor Church of Our Lady of Vladimir. This church is one of the best creations of Vasily Bazhenov. It is unique and looks more like a fairytale castle than an Orthodox Russian church. The first thing you see is the curved staircase leading to the second floor. No church in Russia has anything like it. Because of the neighboring constructions, it was hard to take photographs of the church, at least, from the side of the staircase. Moreover, it is forbidden. (Why!?) 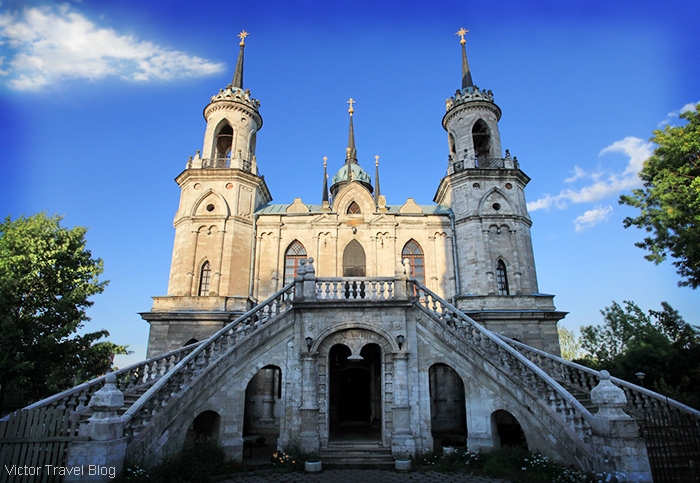 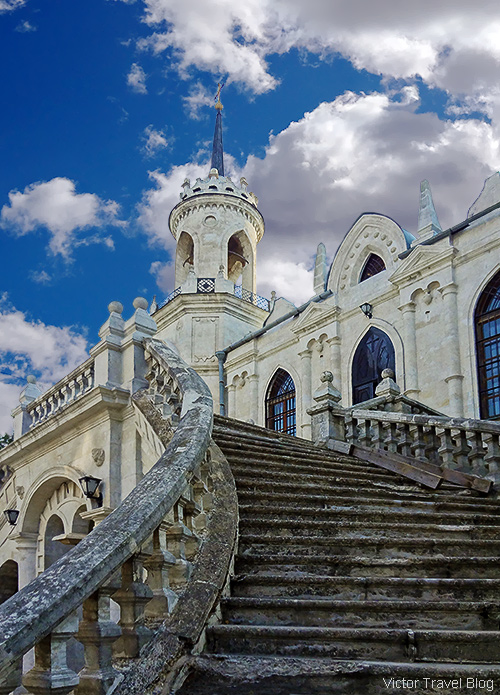 With this, the architectural part of our visit to Bykovo was over. Once again, we were convinced that all the beautiful objects in Russia were built not by communists, but in the imperial times. New leaders did not manage to save not only those things that they got for free, but all that was built by the Soviet people during the communist era.

At 10:00 a.m., we embarked on the second part of our plan: to look at the abandoned Soviet aircraft. Clearly, all the working airports are well-guarded, but how about the abandoned ones? It was a little scary, but we tried.

One of the oldest airports of Moscow, Bykovo, was built in 1933 and closed in 2011 under very strange circumstances. Its terminal was precipitously demolished, and all the perimeter was enclosed by a concrete fence; however, this “obstacle” did not prevent the stealing of everything that could be stolen. Only the runway and several civilian aircraft survived. Today, the most part of the former airport is occupied by new cars for sale.

Before the trip, we identified the location of the group of abandoned aircraft, using Google Maps, and all we had to do was to find a hole in a concrete fence, and enter. One or two kilometers from the aircraft, we found a narrow gap and entered the territory of the former airport. There were no guards, no cameras (we hoped), and no dogs, so in half an hour, we already were near the abandoned aircraft. 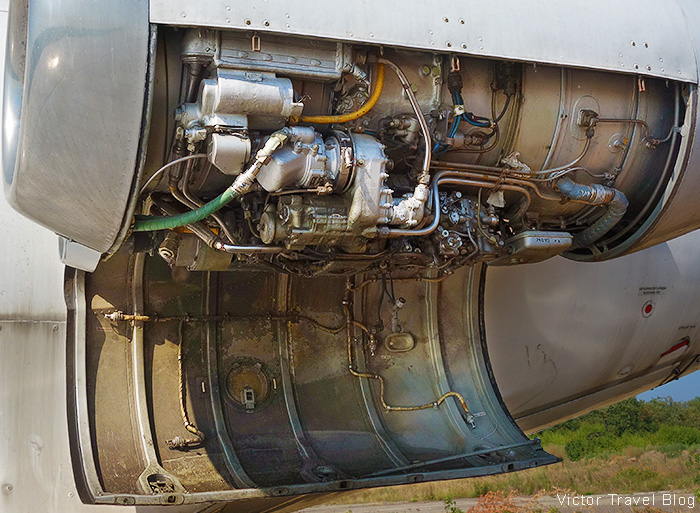 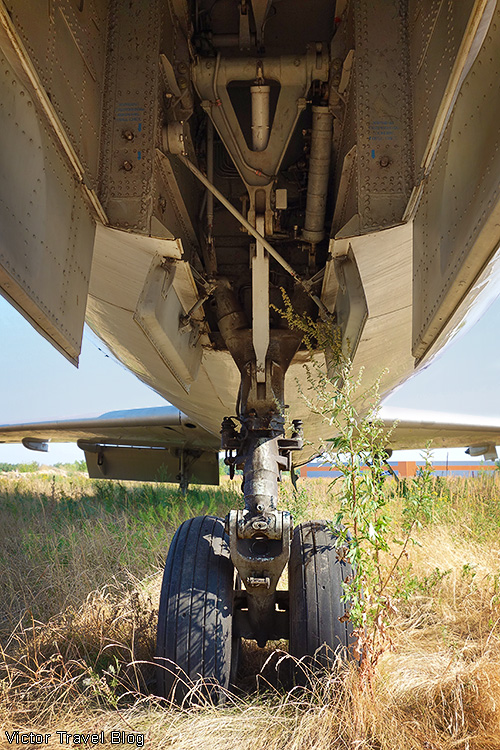 They sat there like beached whales, and I, the flyer’s daughter, was sorry for them as if they were living beings. Just five years ago, they flew, but now, with only 50% wear, they are totally unneeded.

For sure, we wanted to get inside. While I thought about what part of the wreckage could make a platform near the aircraft’s door, Victor found an old technical ladder in the high grass. Moreover, it had wheels. We took it and dragged it up to the aircraft. In five minutes, Victor opened the first door. Nobody raised the alarm. 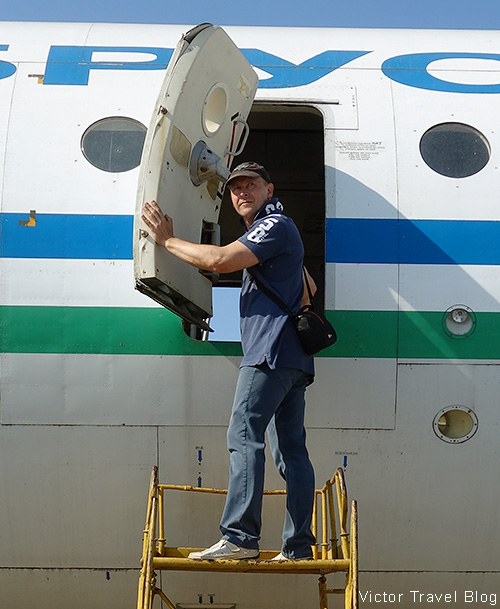 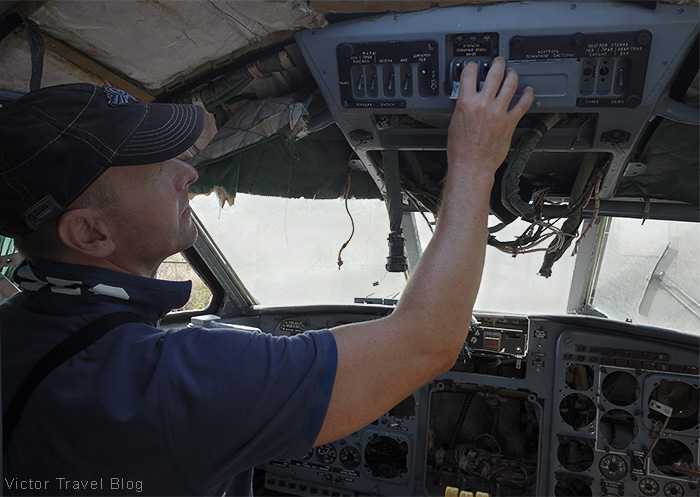 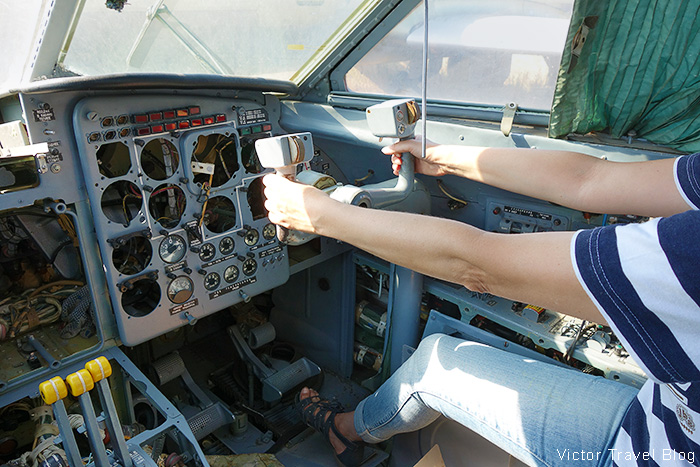 All these planes could still fly. Yak-42D is not an outdated project. In its time, it was the new word in aircraft construction. Similar models: Ty-134, Sukhoi Superjet, Boeing-737, and airbus A319 still work in the sky.

Developing Yak-42, the designers tried to combine very contradictory characteristics: the ability to land on small and unsuitable airfields, fuel efficiency, and high speed. This aircraft started to transport passengers at the end of 1980. By 2003, 183 Yak-42s were built. There were only nine accidents in 30 years of service, and only one (06.28.1982) occurred due to engine failure; the other accidents took place due to pilot error or bad weather. On September 7th, 2011, the last flight for the Russian hockey team Lokomotiv was also the last flight for Yak-42D. Only two passengers survived. The career of Yak-42 was over. 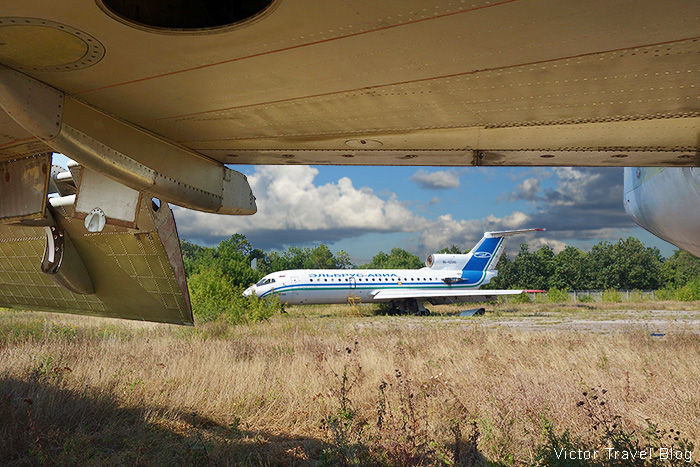 Which demonstration can be more evident of the genius of mankind than an airplane taking off? Someone said it is possible infinitely to look at the sea, the starry sky, and the fire. I would add: at aircraft. I love aircraft, but I have only been inside of a plane; and never beside it, under it, or above it…. I never stood near its great wheels, under its wonderful wings, beside its powerful engine, and more importantly, I have never been in the cabin of the pilot. But I always wanted to. That day, I could touch the abandoned aircraft, feel them, and speak with them. It is like petting an enormous, but very old and good-natured animal: elephant, whale, or giraffe, for example. One unfortunate movement is enough to flatten you out, but they are calm, sad, and considerate of you. They are abandoned.

The Internet says one of those abandoned aircraft, which was locked, is offered for sale. Who will buy it? As my father said: Investments in the aviation business can quickly make you a millionaire, but only if you were a billionaire before.

More about Russia:
Unique Abandoned Russian Church in Yaropolec
Peter I and His Baroque Church, Only One in Russia
Russian Winter on Volga

28 thoughts on “Abandoned Estate, Bazhenov’s Church, and Abandoned Aircraft: All in One Place”