Island Hotel Katarina or Paradise With Some Drawbacks

A picturesque island, Sveta Katarina is located in front of the city of Rovinj in Istria, Croatia. It is an island-hotel called Maistra Hotel Katarina. The last owner of the island—Count Milewski, who bought it in 1905—wanted to make it a true paradise to receive guests and use as his own residence. For 21 years, he did a great job, the results of which we are able to see today. The island is a paradise indeed, but… only at first glance.

When you gradually acquaint yourself with it, you notice some really paradoxical and even shocking things, although Count Milewski bears no responsibility for them. More on that later; I don’t want my comments to have a negative influence on your opinion about this wonderful place from the first lines. Let’s be fair. 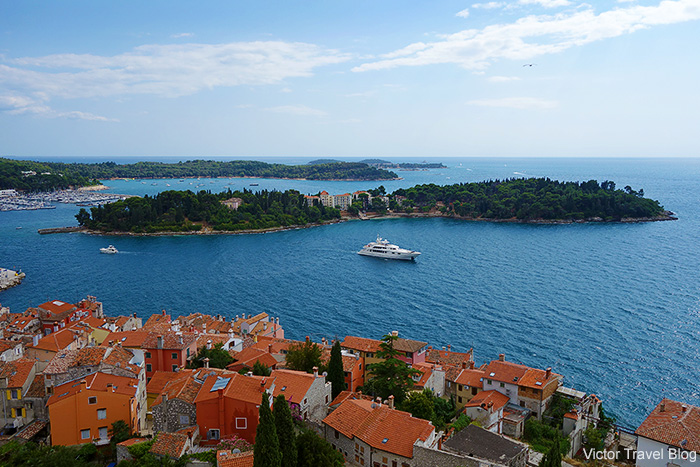 View of Sveta Katarina Island from the bell tower of the Saint Euphemia Church. Rovinj, Croatia.

The beautiful rocky island, Saint Katarina, covered in conifers, inhabited by seagulls, and equipped with picturesque paths and secluded spots for isolated rest, although it also has the public beach and swimming pools. Anyone may arrive here from two points at the Rovinj quay by boat. Everything is free for the hotel guests, but visitors have to pay. If you take the Rovinj Suite, the view from the window will amaze you! It is the first and the most significant advantage of Maistra Hotel Katarina, although the views are great all over the island. 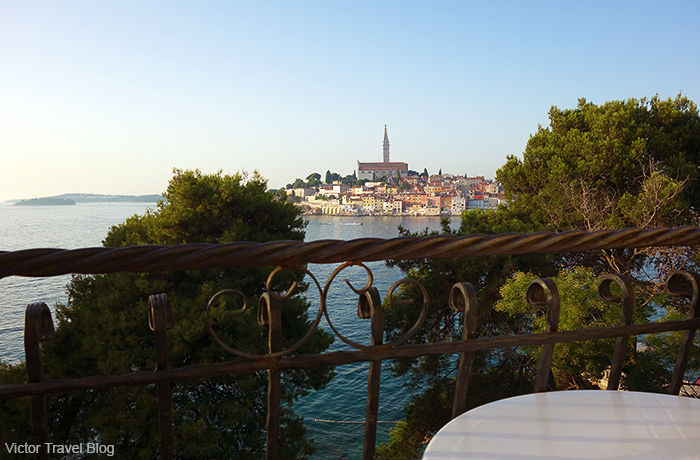 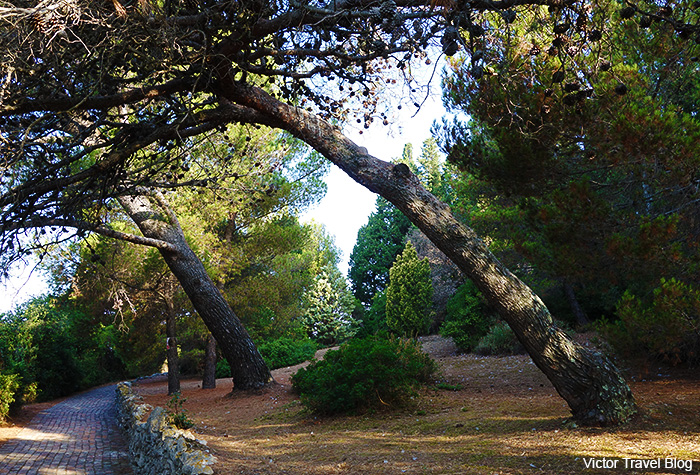 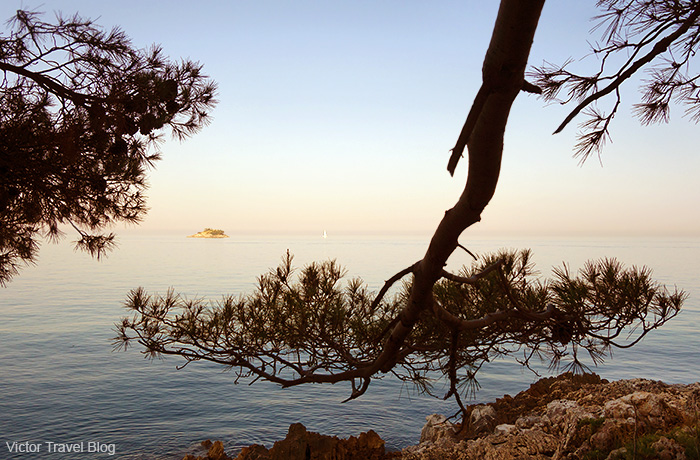 Breakfast is included in the room cost, and that is a second advantage. The restaurant operates all day and you can order a meal from its menu. I tried it once; it is expensive and not so tasty. For 120 Kuna, you may use the buffet in the evening, and this is what I call tasty, varied, and cheap. It is two- or threefold cheaper than an a-la-carte dinner in the hotel or in a restaurant in Rovinj itself. This is where the advantages end.

After you have settled in your splendid room with the majestic view of old Rovinj and its famous bell tower of the Saint Euphemia Church (a precise copy of the San Marco tower in Venice, but not painted), heard the seagulls and breathed in the mix of the sea and pine fragrances, you notice it is no less than 37 degrees on the balcony and go to turn on the air conditioning system, BUT THERE IS NONE!

That’s strange, you think. The room providing such a view from the window could no way be cheap. You ask at the reception whether it is possible that the rooms are not provided with air conditioning. They answer: It is a two-star hotel. You can’t expect air conditioning!

“Excuse me, have you ever been to Thailand?”
“Yes.”
“Can you imagine a room without air conditioning there?”
“No.”

“Then how can you not have the rooms equipped with air conditioning in Croatia, when it is even hotter here than in Thailand? Do you care about your guests or the hotel stars?”

“It’s all about the policies of the Maistra company which owns 15 hotels in Istria.”

I wonder, if they are able to count money in Maistra. If you equip at least several rooms with an air conditioning system at a cost of 300 Euros each, and raise the price of these rooms ten Euros, all the expenses will be covered in a month and you start to make a profit. Are you afraid these rooms will remain empty? Are you kidding me? Considering the summer heat of 35-40 degrees, people would choose them first.

Well, okay, let’s try to get some sleep. The balcony is wide open. By evening, Rovinj suites are very well warmed by the sun; you can hardly breathe even after sunset. The seagulls are squawking like mad and the sea waves gently crashing against the beach. By ten p.m. Rovinj quay fills with the sounds of cheerful music within 500 meters directly in front of your balcony. This is the nightly live concert on Rovinj’s shore. The audibility is superb. Please, enjoy. But what a view from the balcony.

You will spend about half the night enjoying a bath in your own sweat, the art of local musicians, and a room temperature like that of a Finnish sauna. Then the walls will cool down a bit and you’ll be able to fall asleep, of course if the balcony is still open (seems like it should never be closed here). But in this case, the same seagulls, or the gardeners, or a car transporting the suitcases and bags will take care of your early morning wake-up call. Yes, quietness is a problem here.

By the way, there are two additional warm blankets in a wardrobe in case you find the temperature in your room rather low.

Cicadas chirr. You are having breakfast in the company of a wasp who is eating from your plate (I don’t blame the wasp–it is simply living). Breakfast begins at 7 a.m. and at the very same time the cleaning personnel start to mop up the floors in the restaurant. In other words, while you and a wasp have breakfast, a lady fusses around you with a mop, washing the floor with a very “aromatic” cleanser. She is doing it perfectly, but why she can’t do it before breakfast, I can’t understand.

The whole Sveta Katarina Island is covered with pines and firs–Count Milewski did a great job. It is a real forest with an amazing scent. People say that the asthmatics should come here because they can breathe more easily here. Dear asthmatics, it is definitely easier to breathe in the forest; however, you risk not being able to get up in the morning, having fallen asleep in those stuffy, not air-conditioned rooms. But what a view from the balcony! 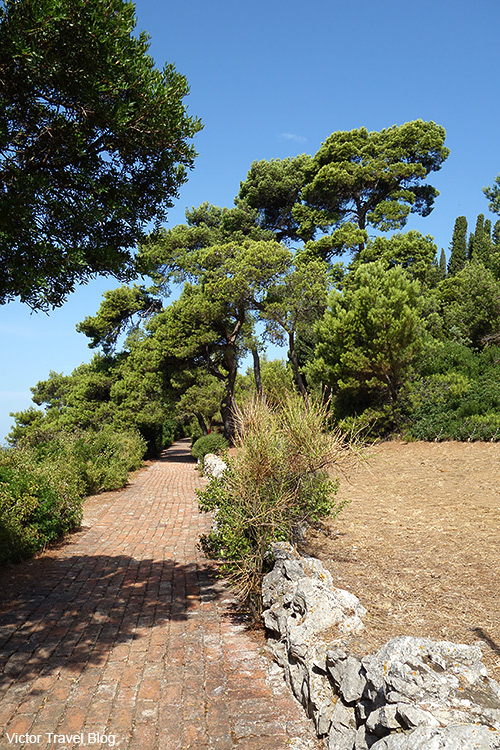 The water in the sink drains very slowly, so you should use only a thin jet of water. While you brush your teeth, wash up, and—god forbid—shave, the water will fill up the whole sink, but at least it won’t run over the edge. Although, only the Rovinj Suite 431 provides such a condition. But what views are on the island. 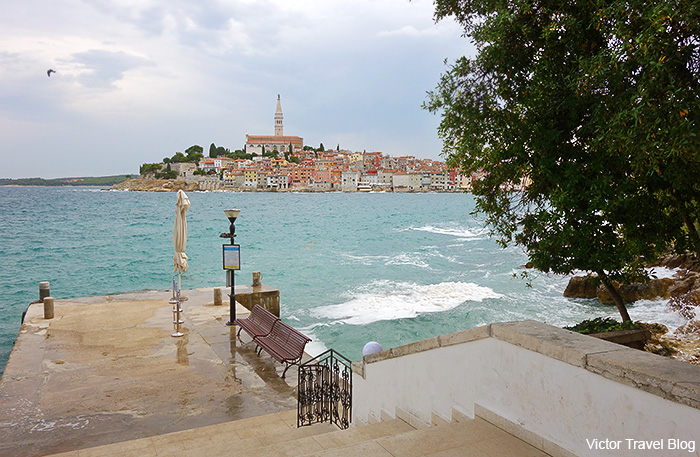 There is a great variety of excursions provided on the Rovinj embankment: the excursion to the unique Lim Fjord, the sightseeing tour around Rovinj, the truffles trip, fishing, the excursion to Pula…. You buy an excursion. The bus will depart the next morning at 07:30. Happily, you return to the hotel to be at the private wharf of the hotel tomorrow at seven in the morning. Breakfast in the hotel begins at seven o’clock too, but you decide to skip it in favor of the excursion. A Maistra’s boat departs from the main pier of Hotel Katarina to Rovinj every hour. The travel time is about three minutes. At least, so it is claimed by the timetable posted at the pier and handed to the guests upon check-in.

“It arrived and took people from the pier on the opposite side of the island.”
“?!”
“At seven a.m., it arrives there.”
“Is it written in the timetable?”
“No, but why didn’t you ask before?”

Imagine, you have the ship timetable, but you need to come to the reception and ask, just in case, if the boat arrives precisely to this pier!

I’ve asked at what time and where the eight-o’clock boat will arrive, and, “Will it definitely arrive and depart from the main pier at eight a.m.?”

“Yes, it will definitely arrive here at eight a.m. and then depart.”

Then you call to the tourist agency and ask to hold the tourist bus for you. The bus waits 45 minutes (!) and then departs without you because the eight-hour boat arrived at your pier, BUT AT 8:15.

As a result, you have lost both the paid excursion and the paid breakfast, and the reaction of the reception is limited with, “We are sorry”. But what a view from the balcony.

It is really worthwhile to take a trip to Rovinj to stay in Hotel Katarina, but only for the sake of the wonderful nature and pure sea. The only way to make your rest comfortable is to provide yourself with portable air conditioning and an inflatable boat. You need the last in order not to depend on the breathtaking punctuality of Maistra’s boat team.

The hotel has several apartments with air conditioning–the Family Suites—but they are two rooms and expensive. By the way, Booking.com contained no information about the lack of air conditioning in the rooms of Hotel Katarina.

And last, but not least, there is no medical help on the island; so if you are older than 50 and have some cardiac problems, a doctor could come in by the same Maistra’s boat (you might remember my notes about its punctuality). In other words, if the nightly sultriness in a room without air conditioning kills you, the place of your death will be a cozy, clean, and beautiful island in the Adriatic Sea. Probably, it is better than to die somewhere in Düsseldorf or Paris.

But what a great view it was from the balcony.

When I was writing this story I intended to:

P.S. Will I ever come back to Hotel Katarina? No doubt! Even if the air conditioning is still not installed and I die there.

Our Sailing in Croatia
Recipe for Trogir, Croatia
Why You Will Love Summer Rovinj

27 Responses to “Island Hotel Katarina or Paradise With Some Drawbacks”