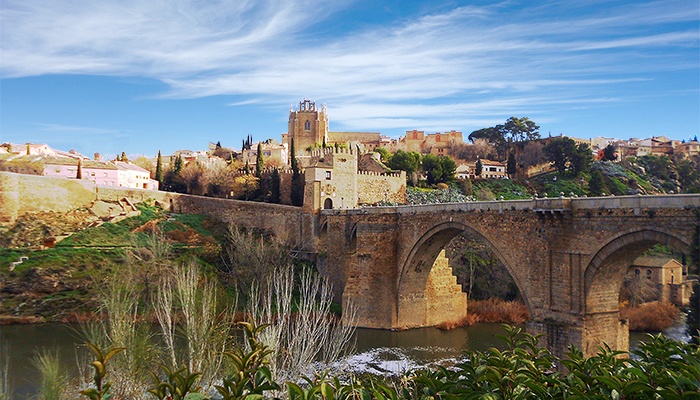 From 712 to 1085 the Spanish city Toledo—now one of the most visited tourist cities of Spain—belonged to the Moors, who called it Tulaytula. By that time, Europe had slowly forgotten all the achievements of the Greeks and Romans, having deteriorated into some muddy backwater of overall illiteracy and grubbiness, but the Arab world kept rapidly developing. Nowadays it’s hard to imagine that back then science prospered in Bagdad, Cairo, Cordoba, and Toledo, rather than in Rome, London, or Paris.

In 1055, the Russian knyazhna Anna, married to the French king, wrote in horror to her father, Yaroslav the Wise, the Grand Prince of Kiev, “Dear Father, they wash themselves only once a year here!… The dwellings are gloomy, the churches are ugly, and the mores are terrible… No king here is able to read… Where did you send my sinful soul? To this stinking hole, to France, to this damned city of Paris!…”

By the way, Anna Yaroslavna knew three other languages apart from Russian: Greek, Latin, and French.

Meanwhile the work of translating all writings of the Greek scientists that could be found during trips to Asia Minor was in full swing in the Arab Muslim Caliphate. All the bright minds of the empire assembled in Bagdad. They were well paid only for a single purpose–to keep developing science and art. Moreover, nobody ever demanded proof that the research would result in practical use.

No antique works could be found in medieval Europe. The Christian church gradually destroyed almost everything that had been created before the Bible, but the most curious thing is that the Bible was not available to the people either. They were not allowed to read it or have it in their possession; only the church clerics had such a right. The logic is clear: it is easier to control illiterate people. In order to keep them happy and humble, you only need to feed and entertain them. Ancient Rome did it splendidly, but not the Christian leaders.

The first thing the Romans did in the location of the future city was to build an aqueduct to supply fresh stream water from the nearest spring. The distance to this spring, which sometimes reached dozens of kilometers, never disturbed them. Then they constructed thermaes and amphitheaters, and only after that did they consider the dwellings. The grandiosity of the currently preserved Roman aqueducts simply amazes.

The Romans realized the importance of the availability of running water in the city, unlike the medieval European rulers. The latter saved themselves this expense–as it turned out–at the cost of people’s lives. Why should we build such an expensive aqueduct, if we can take water from the nearest lake instead? And they were hardly ever concerned that eventually all the dirt drained into this very lake too. What was the result? You will never find a single reference to the plague epidemic in the historical chronicles of Egypt, Rome, or Greece. As for medieval Europe–plague was one of the central characters of each “theatric” season. Hundreds of thousands of people died.

So, while the Europeans messed around in the dirt of their plagued cities, the works of Greek and Roman geniuses–Euclid, Galen, Hippocrates, Aristotle, Ptolemy, Pythagoras–were translated into Arabic in Cordoba, Toledo, Cairo, and Bagdad.

Do you think Copernicus was the first to suggest that the earth moves around the sun? No! 500 years before him, the Arabic astronomer Abu Rayhan al-Biruni in his tractate described the planetary movement for which Copernicus almost ascended to the inquisition fire.

Do you think Thomas Savery invented the first steam engine? No. 1600 years before him, the first model was represented by the Greek mechanic, Hero of Alexandria. He failed to use it in practice, so the technical revolution happened much later.

In the Middle Ages, European scientific literature was kept in Christian churches. If the number of books reached 80, the library was considered to be enormous. Just imagine the amazement of the emancipators of Spain from the Moors when they entered Cordoba and discovered 80,000 books in its library. Thank God, they had enough wisdom not to burn it down.

After the Reconquista accomplishment, the process of translation of Greek scientific works from Arabic into Latin started in Cordoba and Toledo. Scientists from all of Europe rushed to Toledo in order to get new knowledge, which was in point of fact well-forgotten old knowledge. In other words, the revival of scientific and cultural thinking in Europe had started in Toledo. It was the start of the Renaissance. The Sorbonne appeared after that, but the first university in the history of mankind was Cairo University in Egypt.

Nowadays, the Spanish city of Toledo is known more for the Toledo steel used in the production of the best swords in the world, although Damascus can dispute this statement. Sure enough, the city is full of souvenir shops, selling different swords, daggers, and sabres. You can buy the full armament of a Templar Knight with chain armor, helmet, and white mantle with the red cross. We even thought to take this dress for the Venice Carnival we were going to visit next year, but…a Templar sword told me, “Take me with you. I can be of good use to you,” and I took it.

As a rule, we bring some memorabilia items from each trip, but it was the first time when a souvenir was almost the same height as me and as heavy as an anti-tank rifle.

The modern Old Toledo is a very clean medieval city, although it’s easy to see that nobody invests money in it now. The city keeps patiently waiting for its moment of glory, never forgetting the role it played in the history of European civilization.

As always, we decided to take nightly photos of the city and went to Alcazar Bridge. Alcazar of Toledo cannot be compared to Alcazar of Segovia, but it looked quite picturesque in the night illumination. There is a road from Alcazar Bridge, rounding the bend of the Tajo River, from which you can take panoramic shots of Toledo. That’s why Irina suggested taking a walk along this road. “Judging from the map, it’s quite a short distance to the second bridge.” 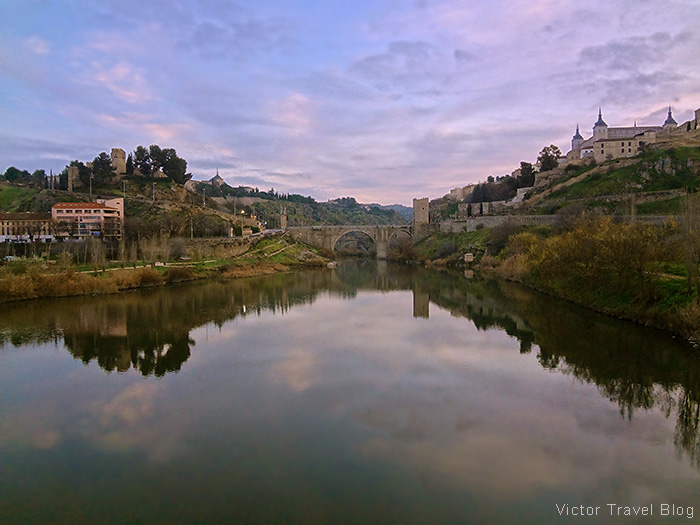 The road was really romantic, especially after sunset; there were no streetlights at all–complete darkness. After five kilometers, I asked whether this road actually leads to the second bridge? After two more kilometers it turned out that it really leads to the San Martin Bridge. Here, our walk around Toledo ended, and my back, reminding me of the precise number of my age, told me to get into bed and lie without moving for at least ten hours.

More about Spain:
Isla La Gomera or Сhristopher Columbus’s Love Story
Antoni Gaudi Paid a High Price for His Genius
Inexpensive Holidays to Spain? How About Cordoba and Seville?