I love theater and restaurants, but more than that, I love history. New York’s history may not be as deeply rooted as that of Europe, but the building of a country in the New World has a historical significance of its own. Ellis Island, which is partly in New York and partly in New Jersey, played an important role in nation building. It was the busiest immigrant inspection station from 1892 to 1954. Millions of immigrants from many different countries, mostly European, passed through the doors of the Immigration House. Imagine how many destinies were resolved here, how many people started a new life, sometimes successful, sometimes not, but most times better than what they left behind.

During the War of Independence, Samuel Ellis, a merchant from New York and owner of Ellis Island, opened a tavern on the island and provided products for local fishermen. The first immigration law, The Naturalization Act of 1790, said that any white man who has lived for two years in the United States becomes a citizen. In 1808, Ellis Island was sold to the state of New York, but retained its name. In the same year, the island was sold to the Federal Government for $ 10,000.

The first immigrant passed through the center on Ellis Island was Annie Moore, a 15-year-old Irish girl who received official congratulations and $ 1,000 ($10 gold coin).

While harbour cruises are available for tourists, it’s easier on the budget—about $10 to $15—to take one of the ferries that run between Ellis Island and Liberty Island from points in New York and New Jersey about every 40 minutes all day long. At Ellis Island, for another $8 you can buy a headset and listen to a one-hour audio tour. It is well worth the money for the added first-hand information you’ll receive.

Beware though that it’s very ambitious to try to see both the Ellis Island museum tour and the Liberty Island tour on the same day. The first takes five to six hours while the second takes three to four hours. If you are thinking of starting to do either one at about 2 p.m., don’t. There is not enough time left before the last ferry leaves to go back to Battery Park, New York, or Liberty State Park, New Jersey.

And don’t forget you must allow time for going through a security check on arrival at the islands. Bringing large bags or purses is not a good idea. Travel lightly with a minimum of baggage. Since the bombing of the Twin Towers, security has been ramped up considerably, especially near the Statue of Liberty. Following the September 2001 attacks, the statue including the pedestal was closed for several years for construction and the installation of safety features. Shortly after re-opening, Hurricane Sandy struck and the island was closed to visitors while repairs were made. The island and statue were re-opened on July 4, 2013.

The audio tour of Ellis Island is excellent. You will listen to the voices of a few of the people who had passed through the immigration lines.

“I arrived with my three young children to meet my husband. The immigration officer asked if I…. Imagine asking a married woman a question like that.” Later she said she didn’t recognize her husband as he had shaved his beard, and the children were scared of him.”

“My grandmother put me on the train in Italy. I was 12 years old. She said she was going to get us some food. I never saw her again. The boat trip over was an adventure. Ellis Island was an adventure. I was 12. To a boy of that age it was all an adventure.” This was narrated by the 12-year-old boy who was now in his 80s.”

The saddest part of the museum was the display of the things people brought. Sewing machines, musical instruments, steamer trunks with well-worn leather handles, impossibly small suitcases or baskets that carried their prized and scanty possessions. Imagine leaving all that was familiar and heading into the unknown. All of your life packed up in one little case. Imagine the desperation, the hope, the worry. The courage it must have taken.

Many of these articles and baggage could have been from people who were not allowed into the country for reasons of illness and were either detained and quarantined or turned back. It is estimated that about 2% were rejected. After 1924 and until the end of WWII, Ellis Island was used mainly as a detention or deportation processing station. Thousands of Germans, Italians, and Japanese were detained there, as the U.S. feared they could be a national threat because of their ethnic origins. Once the war ended, immigration numbers increased again and the American population grew.

A quote on the wall: 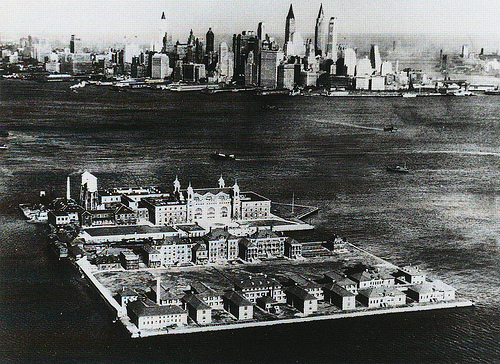 Whether you want to see the fantastic night life, restaurants, and theaters, or visit amazing historical landmarks, fly to the Big Apple. Expensive? I’ve always heard that New York is terribly expensive. It maybe true in some cases, but that depends on how you plan to spend your time in the Big Apple.

For dining, it doesn’t have to be the finest restaurants—Sushi Nakazawa, Carbone, or Betony—or even one of the many places that won’t take a reservation, making you sit at a noisy crowded bar and drink expensive cocktails until a table becomes available. New York is full of small food outlets. Why not explore the ethnic eateries of the Chelsea Market in Manhattan?

Armed with a literate plan of a trip, you can see all the interesting corners of New York without spending all your money.

More about USA:
Temple Square: a Bit of Heaven on Earth
Denver: Second Capital of the USA

21 Responses to “Ellis Island: Gateway to a New Life”

« The Laocoon Group—My Favorite Greek Mythology Sculpture of the Vatican Museum
Quinta da Regaleira as My Internal World in Sintra »
%d bloggers like this: