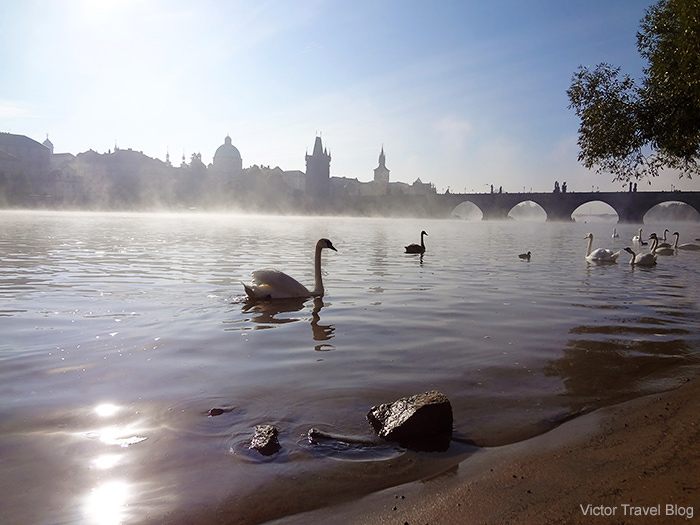 The most famous bridge in the Czech Republic, the most beautiful bridge in Europe… I wonder, is it true? Two hours ago our plane landed in Prague, and in fifteen minutes we will see the famous Charles Bridge with our own eyes.

If you are wondering what to do in Prague, I may be able to save you a lot of money. I cannot understand how it happened that during our last trip to Italy we stopped in Rome for three days, but have arrived in Prague to stay for five? We are crazy!

“Golden Prague,” the city of a hundred gothic towers… If we take St. Vitus Cathedral as one tower, the Our Lady Before Týn as two, and add the rest of the towers of Prague, we will get eight in total. But there are jewelry shops at every step of the way. There is no chance to see all of Rome in two weeks, but in the case of Prague–one day is enough. In general, I would like to dispel the myth about the adorable capital of the Czech Republic and cheap holidays in Prague. If you are coming from some distance, you should think twice, whether it is the right place for your vacation. 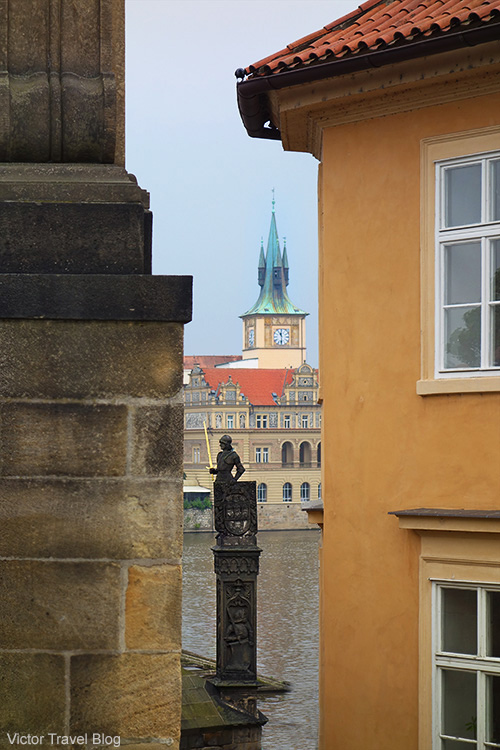 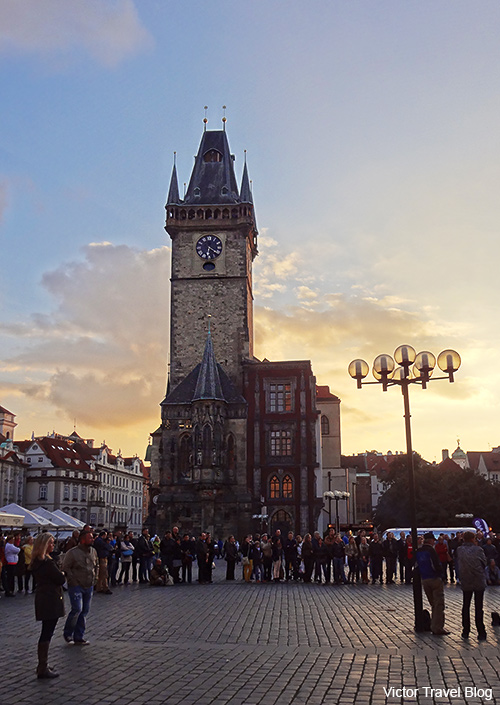 If you are absolutely fascinated with the photos of Prague on the Internet, you should definitely visit this city, but here is my tip: choose your future hotel with all scrupulosity.

Prague offers a great number of hotels to suit every budget. We were absolutely lucky with a place to stay, or to be more exact, we put some effort into finding it. The room in the Hotel Questenberk cost 900 Euros for five nights. As you can see, nowhere near a cheap holiday, but we never regretted of our choice. Questenberk is located in the Castle Quarter or the castle district Hradčany, in a building that previously belonged to the ancient Strahov Monastery. This is a really excellent hotel: exceptionally friendly staff, a charming check-in, welcome with a beer or other refreshing drink of our choice, and complimentary welcome with fruit in the room.

The view of Prague from the breakfast room of Hotel Questenberk 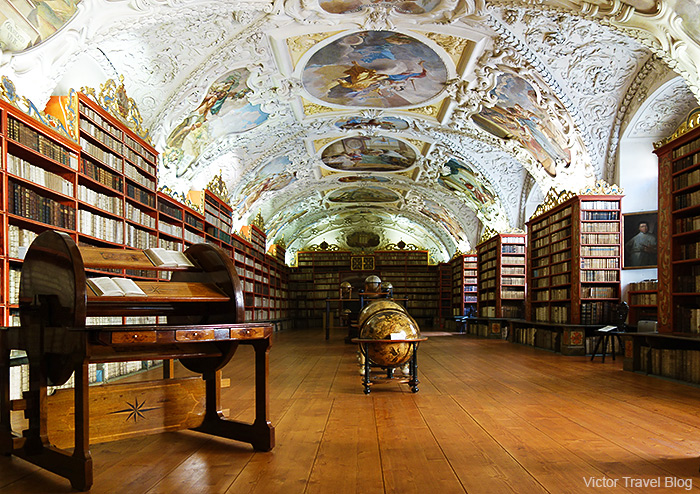 One of the rooms of the Strahov Monastery library

One of the rooms of the Strahov Monastery library

The Hradčany district is probably the best place to live in Prague. This district accommodates Prague Castle, St. Vitus Cathedral, different foreign embassies, the Monastery of the Order of the Knights of Malta (1169), and Strahov Monastery with its unique library. A twist of fate: Prague’s oldest bridge, the Charles Bridge, connecting the Lesser Quarter with Old Center of Prague, has become such a boundary for me that some days I did not want to cross it.

The world-famous bridge divides Prague into two disjointed worlds: the calm Castle Quarter and a huge buffoonery on the opposite side of the river. Can you imagine your well-planned holidays spent at a large railway station? No? You will get such a chance in the Old Town of Prague. These are the realities and you should know them in advance. On one side of the Vltava River are located the residences of the Czech kings, and the nobles’ palaces; the other side accommodates two big marketplaces, historically inhabited by the crafts persons whose happiness probably consists of a pint of beer on the weekends. Time goes by but Prague doesn’t change.

If you are sixteen years old, your only goal is to experience the Prague nightlife, and you are coming with a noisy company from neighboring Poland or Germany–that’s one thing. However, if you need to cross the ocean, think again of what to do in Prague? Please, do not tell me you are going to listen to those vociferous youngsters in bars!

What about the Charles Bridge, Old Town Square, Our Lady Before Týn, and the Astronomical Clock? Why not? But be sure to know, the cheap holiday in Prague does not exist.

If your usual menu consists just of beer, you earn money spending every day on the Charles Bridge on your knees asking for alms, and you are more than satisfied to spend the nights under the bridge or on the bench in a park, then the holidays in old Prague will cost you almost nothing! As Victor said: Only Hanoi was worse than Prague. We did not even say a word about that Vietnamese city in our blog.

Unfortunately, Prague is dirty, and its center is overfilled with kneeling men not older than 40, who don’t want to work even to clean the streets. Their choice is begging alms of tourists who come to Prague. I had not seen such a picture in a long time! 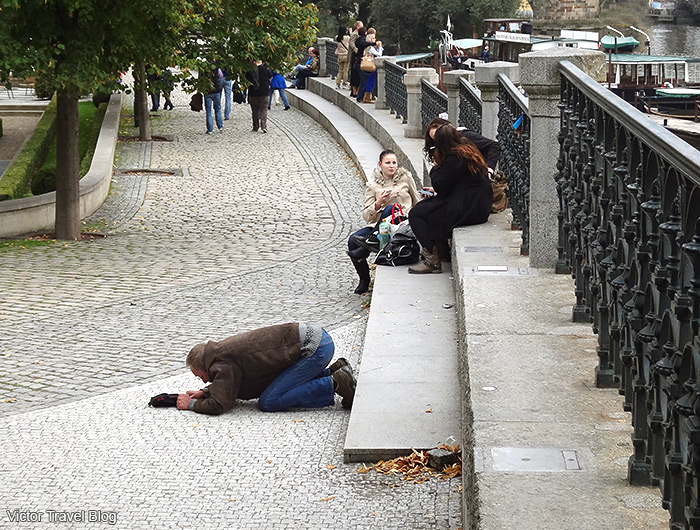 All this makes me wonder, why is this possible in the historical center, near the Old Town Hall (Staromestska Radnice)? This means some need to beg? Without a doubt, there is a city administrator in Prague, and what about the touristic police? A couple of times during our visit to this city I wanted to meet their officer.

At first, we were almost cheated in a Chinese shop. We walked around the city and moved quite far from the center, but that should not be a reason to charge tourists triple the price for a bottle of mineral water. There were no apologies, but they returned the money. What to say about the immigrant districts, if even a blue-eyed fair-haired Czech “legally” cheats tourists on the exchange rate at the central street of Prague? 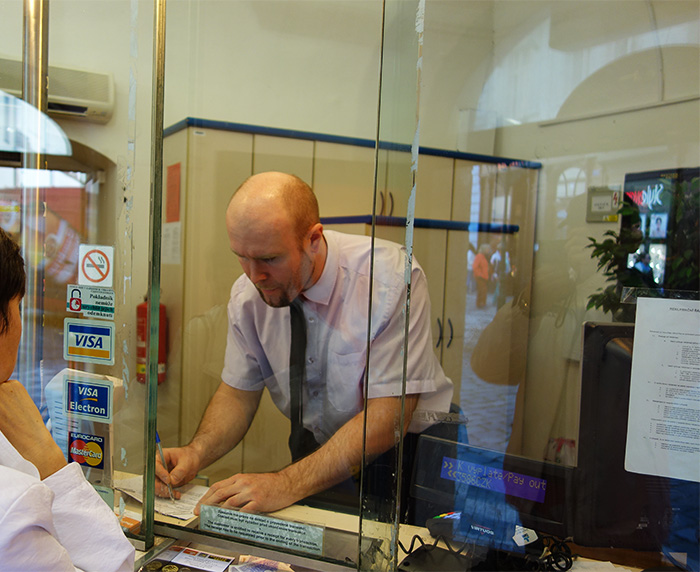 The roguish currency exchange point in the center of Prague on the ground floor of the Hotel Aurus, Karlova street, 3

Everything looks fair and square on the surface: the exchange rate of Czech Koruna in this currency exchange point on the ground floor of the Hotel Aurus is the same as in other places, but somehow the amount of Czech Korunas you receive is 30% less. Why? More likely, your Czech language is not so fluent and you might have missed a tiny font postscript below the exchange rate table, saying that if the deal value is less than a thousand Euros, the exchange rate is 17 Korunas for one Euro rather than 25. I would call it a legal fraud. The deal is irreversible. You will not receive your Euros back, there will be no receipt; however, you may submit a written complaint to the bank, but the review duration will take 40 days.

After two days of resting on the edge of vigilance, I dreamed of leaving Prague forever. For some reason the views of the most famous Prague Gothic monuments did not help. I was longing to leave for Dresden, where such “wonders of hospitality” are impossible. Two days were more than enough to view all historical districts of Prague, including the latest Art Nouveau. Once again, we asked ourselves, what else to do in Prague?

One of the breweries of Prague

Well, time to treat ourselves with the famous Czech beer and local cuisine. Do you really believe that American Fat Tire Ale from Colorado or pale beer from San Diego is worse? Think again.

I should say that all our friends have already been to the Czech Republic and many of them more than once. We were the only ones who had not been, and caused them to wonder: How could it be? You visited so many places, and have never seen the beauty Prague and have not tried veprove koleno (golden roasted large pork knuckle)? Well, now we have been. Assuming that Czech cuisine is too caloric for us, we ate in different Italian cuisine restaurants, at first. Gentlemen, if you’re going to open a restaurant of Italian cuisine, visit Italy at least once! Victor was strict in his verdict: There should be an announcement on the doors of the Italian cuisine restaurants in Prague “Italians, please, don’t enter!”

After the unfortunate “Italian experience,” we came to the Hotel Questenberk reception desk asking them to recommend a good Czech cuisine restaurant. They gave us several addresses and we went to one of them immediately. The restaurant “U Sedmi Svabu” was really good. We returned three times, deciding not to tempt fate. Their garlic soup with tender ham, fresh parsley, toast, and cheese (cesnekova polevka) was very tasty. What about the bill? Well, it was quite usual for Rome, Paris, Jerusalem, Barcelona, or Florence–70 Euro for two, with wine.

The loud conversation about the wonderful and cheap holidays in Prague, coming from the neighboring table, made me smile. No doubt, it is very cheap if you are drinking your third pint of beer. Even after half a liter of beer it’s hard to squeeze into your stomach something bigger than a sausage from an outdoor seller. There is no place where the fragrant veprove koleno or the roasted duck with plum and Bohemian dumplings could cost three Euros. Why on earth do they cost 30 Euros in France but only three here?!

By the way, in the Czech Republic the duck is tastier than in France.

Well, we only had to buy some souvenirs before leaving for Dresden (Oh mein Gott, wie ich Dresden liebe). But meanwhile, here in Prague, there is a large choice. The shop windows are overfilled with a plenty of strange and scary dolls, fully corresponding to the signboards of bars. The Clavic horrorrs in the center of Europe 🙂 Yes, the geographical center of Europe is located in Czech Republic. 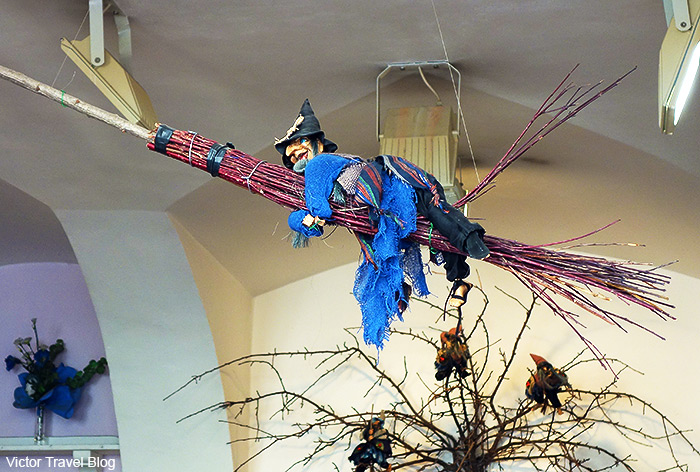 Plenty of pictures and photos of the best views of Prague, magnets of unimaginable forms, caskets with paintings of the famous Art Nouveau artists, Alfons Mucha and Gustav Klimt. Shop windows sparkle with jewelry made of Czech rubies–magnificent look! We bought a couple of pictures in order never to come back to this city. Despite all that surface shine, Prague left an impression of fake beauty. It’s like a second-rate theater, a second-class Europe: a dozen widely promoted buildings and beautiful views, and cheap beer. The people are different, of course, but more often they are very stiff and somber with a really strange mentality. Look at their souvenirs.

According to one of the Prague legends, from time to time an owl appears at the Old Town Hall, predicting difficulties with its sorrowful scream: whether it is a flood, a fire, or a war. Many times the inhabitants of the neighborhood houses were trying to shoot it down to prevent the disasters, but it came back again and again, making the citizens of Prague shiver with its morose groans.

Europe is changing rapidly, but Prague is frozen in time. The mentality of its citizens has hardly changed in several centuries. Their ancestors were kept in ignorance, frightened with devils, burned alive… Looks like they rarely felt happiness to transfer happiness to the next generations. In general, this time we chose a questionable place for vacation. 🙂 Prague did not give me a chance to betray my love for Italy, France, or Belgium. The only bright memory of the trip to Prague is the white swans under the famous Charles Bridge. 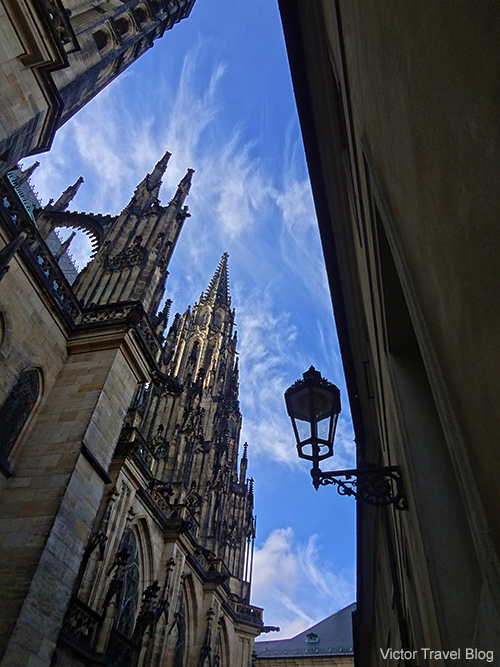