Abbey of Santa Maria of Alcobaca

He took the body of his beloved woman out of the grave, dressed her in queen’s clothing, sat her on the throne, knelt in front of her, kissed her dead dried hand, and ordered all his vassals to do the same. “She is my queen eight years already. Now she is your queen too.” No one dared to object to King Pedro I of Portugal, and Ines de Castro became the Queen of Portugal ten years after her brutal murder. She died at age 30.

But before this, a bloody love affair took place. Today, every schoolchild in Portugal knows the story.

Over the ages, this story has gathered different legends around itself. Even Voltaire, Hugo, Stendhal, and Camoes admired it. Some say that the story has too much figment, but not me.

Who was she, the most famous Portuguese queen, Inés? Very little is known about her. Why was an amazingly beautiful girl of noble ancestry, whose skin was so white that you could see the wine flowing through her throat when she drank it, not married at the age of twelve-fifteen, as was normal in those times? Instead, Inés de Castro came to Portugal as a lady-in-waiting of the young queen, Constanza Manuel of Castile.

It was the second marriage for Constanza. She had already been wedded at the age of nine, but that union had been annulled after two years. To put it mildly, her new fiancé Prince Pedro didn’t like his father’s choice, but still he obeyed. The wedding was held, and Princess Constanza discharged her duty to the Portuguese Crown, having given birth to an heir to the throne, but still she had no luck in love. She was not interested in the prince, and he behaved very freely. The prince began courting Ines, who refused him, but he still retained hope and did not give up hope of winning her.

Each of these three people was lonely in the luxurious royal palace in their own manner: the prince wanted adventure, the princess knew she was unloved again. What about Inés, who was already over twenty? What was she living for? Could it be true that she had to stay a chaperone forever? Is it possible to resist your own desires endlessly?

When news of the prince’s mortal wound, received during a battle, reached the royal court, Constanza accepted it calmly, because for her it meant the end of her tears and humiliation. Her position at court was firm–she was the mother of the Portuguese Crown Prince. Inés de Castro felt real grief over the bitter news, and all others noted that fact. However, the strong and young prince survived and returned home. Inés could not longer delude herself, having nearly lost a man who was seeking her love so insistently. From that moment, she loved and was happy. But it was just the beginning of their tragic love story.

From this moment on, Pedro devoted all his spare time to Inés. When their children were born, Pedro was forced to move his “family” to a beautiful and cozy house a short distance away from the capital. Inés de Castro could not stay among the retinue of his lawful wife anymore. Probably, both women shed an ocean of tears back then.

Between military campaigns and hunting entertainments, the prince returned to the home where his two sons and a daughter grew up, but then he saddled his horse again and galloped to the royal Coimbra. Of course, Inés was sad during his absences.

Constanza Manuel left this world first; she died in childbed when she was 29. King Afonso IV of Portugal started to look for a new wife for his son, but this time Pedro flatly refused to marry anyone except Inés. Afonso IV moved from appeals to warnings.

This woman was uncomfortable for the king, the royal court hated her as well, so the state council decided to get rid of the prince’s beloved woman and her children. Having waited until the son left his home, the king and his three attendants departed to Quinta das Lágrimas. Probably, Inés was happy about that visit. Such an honor: the king himself arrived to see her after so many years spent almost in isolation. Now she would acquaint him with his little grandchildren, the magnanimous ruler would forgive her and Pedro, and finally everyone would be happy.

We will never know the truth: either on the king’s order or with his sufferance, the nobles who accompanied Afonso IV knifed Inés de Castro right in front of her children. I think that the king had realized all the irretrievability of his deed at once. What would he say to his son, how would he look into his eyes? There was no excuse for what had happened. Perhaps, realizing the enormity of the evil deed, he was the one who hindered the much greater crime: nobody touched the children.

The Death of Ines de Castro by Karl Briullov

Nowadays, the way they handled the body of the murdered woman would be called a farce. Inés was buried in the oldest Monastery of Santa Clara-A-Velha near the Saint-Queen Isabella of Portugal and Aragon, and consecrated a saint. On that very evening King Afonso IV suffered a heart attack from which he never recovered.

According to one of the versions, when the Crown Prince returned home and saw of what had happened, he left the country and spent the next two years in the sacred mountains of Montserrat, living like a hermit. Maybe prayers helped him to overcome the sorrow, but I suppose he brooded over the scheme of vengeance too. Imagine two years spent in deep woe and thousands of minutes of reflection.

When a threat to the state of Afonso IV de Portugal became evident, the prince was notified at once, and he returned to Coimbra. He came in to his still living father, did not say a word, but only rechristened him and left. Having become a king, Pedro I of Portugal gave two orders: to find and bring to him the killers of Inés de Castro, and make a snow-white marbled sarcophagus of wondrous beauty.

Two of the three killers were issued to him by Castile and delivered to the palace, the third escaped to France and disappeared.

“Ten years ago you tore out my heart. Now, I’ll do the same with you.”

The hearts were torn out from both of them alive. It is even said that the king did it with his own hands.

After a while, when the second order of the king was executed, an extraordinary funeral procession moved from the Monastery of Santa Clara-A-Velha to Coimbra. They brought the exhumed body of Inés de Castro to the royal cathedral, the Santa Cruz (Holy Cross). The royal decree ordered all the lieges to arrive at the cathedral. Everything was ready for the crowning. The dead woman’s body dressed in gorgeous raiment sat enthroned.

“This woman had been my lawful wife for eight years. Today she will become your lawful queen.” The king kneeled to the body and kissed its withered hand. No one dared to object, remembering the recent story with the torn out hearts. 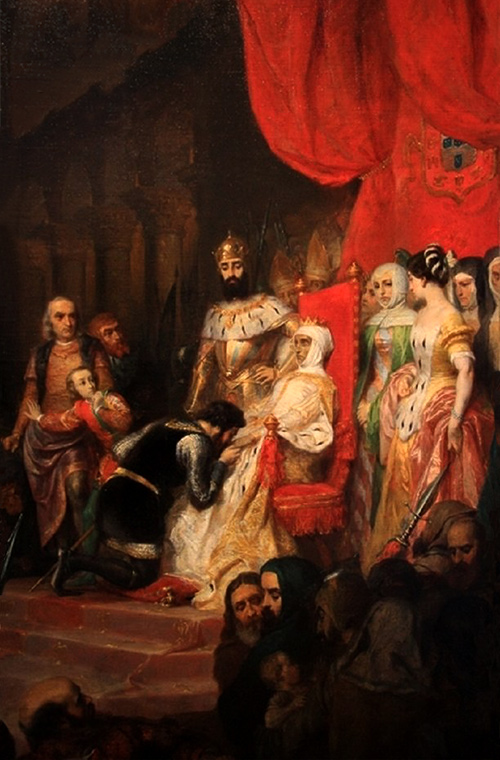 Monastery of the Holy Cross

After the end of the ceremony, the body of Inés was solemnly put into the unique marbled sarcophagus and moved to the royal mausoleum, Abbey of Santa Maria in Alcobaça. The king had never married again. Later, he gave another order: to make the same sarcophagus for him and to bury him next to his wife when the clock would strike for him.

He passed away after ten years. Pedro died relatively young having left the country in prosperity. People called him “o Justo,” ”the Just.” His successor, the son from the first marriage with Constanza, Fernando I of Portugal, followed his father’s wishes.

We do not have any historical chronicles and reliable proof that everything happened exactly that way. Only two snow-white sarcophagi stand in the Abbey of Santa Maria of Alcobaça in front of each other through the ages. 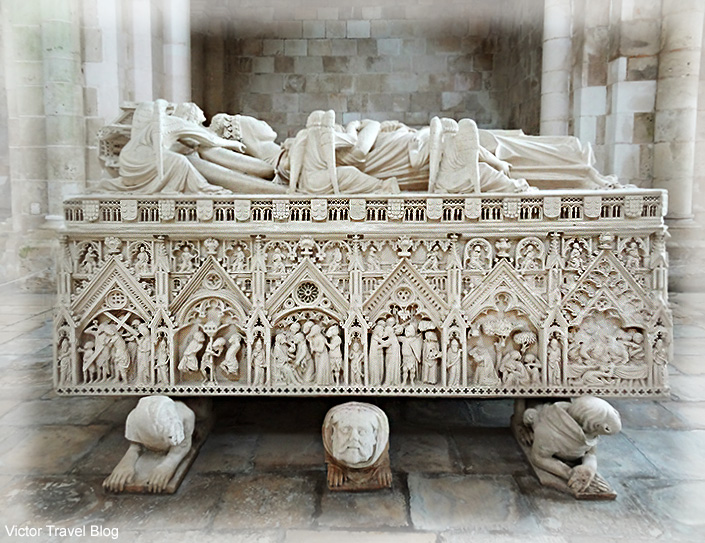 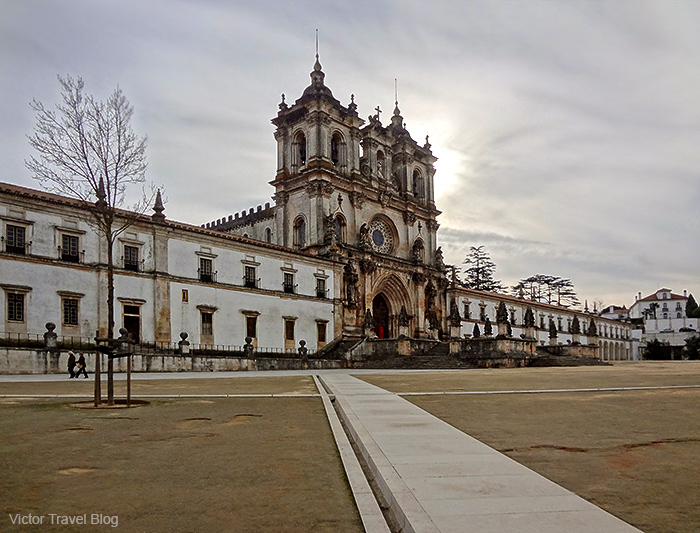 Abbey of Santa Maria of Alcobaça

Today, in Coimbra, the Quinta Das Lagrimas Hotel (Villa of Tears) is located on the site of the old hunting house, where Ines lived with her children. The hotel has a park with some unusual plants and two simple ponds: Pond of Tears (Fonte Das Lagrimas) and Pond of Love (Fonte Dos Amores). Legend says that the first one was born from the tears of Ines while she awaited dates with her Pedro, and the second one saw those dates.

Quinta das Lagrimas Palace or Estate of Tears in Coimbra

The Fountain of Love in Quinta das Lagrimas Palace.

Maybe this beautiful old tree is the only living thing on Earth which has seen the young and enamored Ines and Pedro.

Unlike Romeo and Juliet, this is a history of two real people who loved each other but couldn’t live together in peace and happiness. 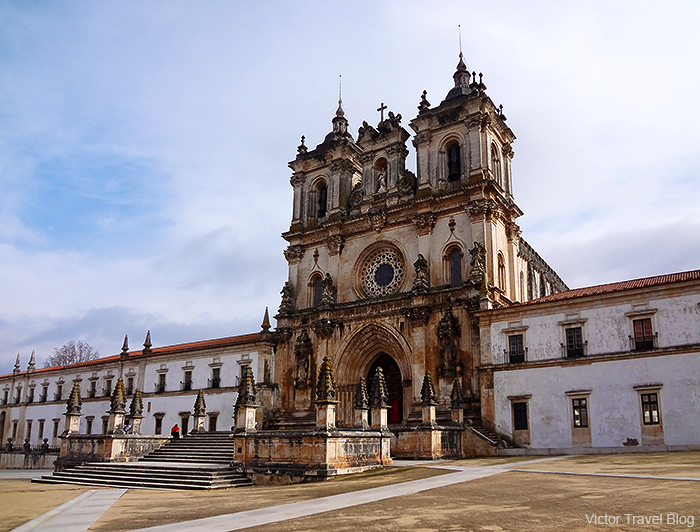 The Abbey of Santa Maria of Alcobaca

Dresden: 68 Years After Bombing
Guy de Maupassant’s House Put Up for Sale in Etretat, Normandie
Montmajour Abbey and the Necklace of the Decapitated Queen

26 Responses to “Ines de Castro: Coronation of the Dead Queen”

« Paris: Three Days of Tartare Tasting
The Slavic Horror in the Center of Europe or What to Do in Prague »
Loading Comments...
%d bloggers like this: