What are the most common sights of Paris? Of course, the Eiffel Tower and the Louvre, but to write about them is a little bit trivial. Of course, I’m enraptured by Venus de Milo since I have to make great efforts to emulate such an ideal of beauty and slenderness. That’s why I’ll tell you about one uncommon and delicious dish which can’t harm your figure, and which we were eating during our trip to Paris: a beef tartare.

For most people eating raw meat seems inconceivable due to the safety concerns. They may travel around the world and, knowing about tartare, consciously overlook this item in a menu. However, with regard to safety, I would be careful not with the raw meat itself, but with its origin and proper storage. In other words, I wouldn’t try it in every country. France with its tartare and Italy with its carpaccio are safe choices, because food preparation is a cult in these countries.

What is a beef tartare? This dish is, generally speaking, only for fans, or you just should know how to prepare it. We tried it for the first time some years ago in Picardy, France; the second time in Provence, and the last in Paris. As you can see, we are still alive to tell you about it. Although tartare is considered one of the traditional French beef dishes, it is not served in every French province, so it would be wise to start your acquaintance with it in northern or central France. 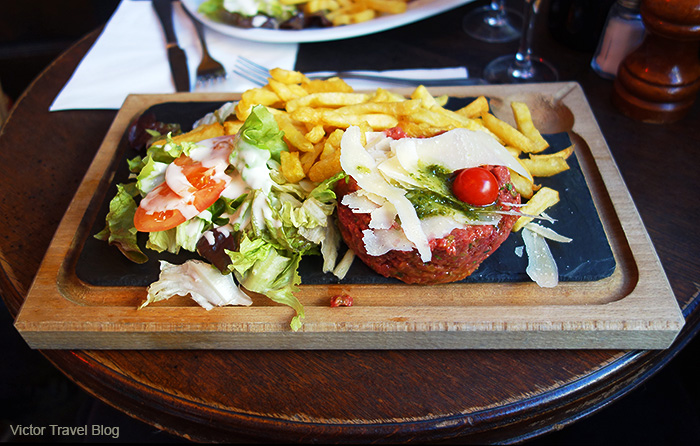 For those who don’t know the beef tartare recipe, here are the main ingredients: high quality fresh beef, excellent olive oil, a drop of cognac, and spices. It doesn’t matter how steak tartar came to the European gastronomic stage; the fact is that it was quickly assimilated and forever turned from a kind of “wild” food into a haute-cuisine dish. In every brasserie of Paris we were carefully asked one question, “Do you know tartare?” Of course, we answered, “Oh, yes, we know and love it very much.”

If you dream of looking just a little bit like the statues that amazed you in the Louvre and you still have enough willpower to avoid numerous culinary temptations, your everyday Parisian dinner should include tartare and wine. You must agree that it’s much better than simply a salad leaf. 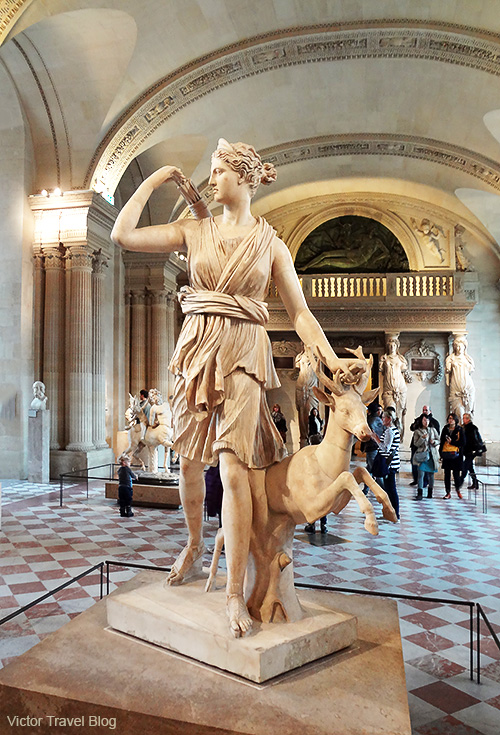 The Diana of Versailles is a slightly over lifesize marble statue of the Greek goddess Artemis (Latin: Diana), with a deer, located in the Musee du Louvre, Paris. 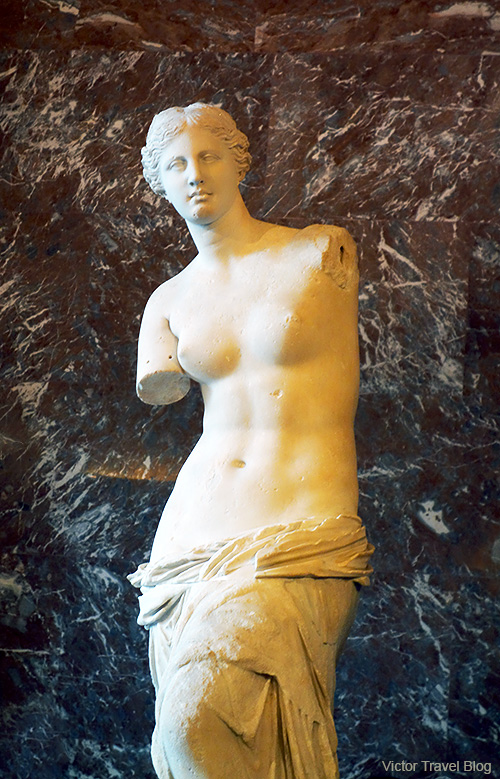 Venus de Milo is one of the most famous ancient Greek sculptures, was discovered in 1820 on the island of Melos (Milo in modern Greek). 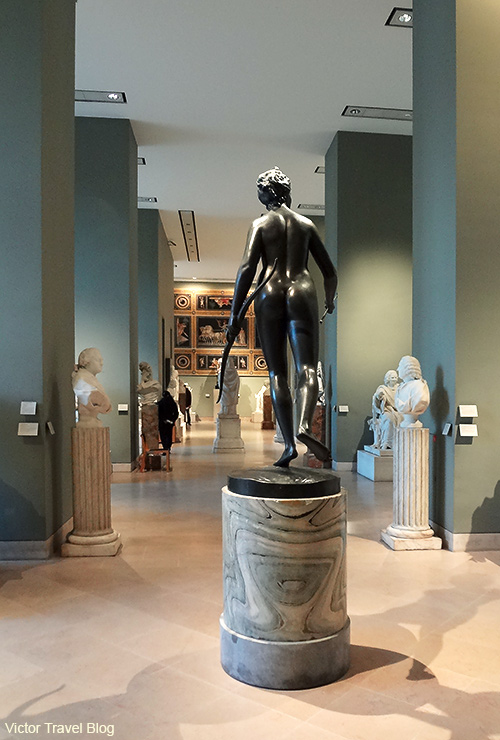 Since a hundred years ago when tartare first came over the strait to England and then over the ocean to America, this dish has gained in popularity. Nowadays, you can find avocado tartare, tomato tartare, and tuna tartare in some menus. Only once we were unlucky with our beef tartare in Paris. That time, we had strayed from our policy of choosing places full of the locals, in preference to an almost empty cafe with handy sofas and a pleasant interior. It turned out that all the money was spent on this interior!

In the restaurant Beaurepaire, we were served a bottle of nice wine and an effective looking tartare. The trick was you had to make the tartare yourself. All ingredients were in front of you to mix as you wished.

By the way, our first attempt to try a tartare was inspired by the old British comedy television series about Mr. Bean. Do you remember how on his birthday he tried to give himself a treat with this French delicacy and then shoved its pieces into flower pots and ladies’ handbags? It was worth trying, we decided.

Honestly, I expected a lot from our last evening in Paris, but not mixing of a minced meat and spices with my own hands. As you can easily imagine, my efforts didn’t bring the desired effect. Still being hungry as Mr. Bean, I had to get rid of this unpleasant “self-made delicacy.” Victor, being a real gentleman who was trying not to hurt the restaurant owners’ feelings, had to eat two not especially staggering dishes: my “creation” and the sausages he had ordered.

After such bad luck, this hungry woman made an uncompromising decision: a farewell dinner should be held in a proven place, for example, in Le Saint Andre. In this brasserie near the Notre Dame de Paris, on the corner of rue Suger and rue Danton, nobody pretends on a luxurious interior. There are small typical Parisian tables, which can barely hold a pair of plates, the same number of glasses, and a bottle of wine; however, waiters recognize regular guests, and the cook is a Master! Highly recommended.

You will find a lot of delicious dishes on the menu, including a traditional perfectly cooked onion soup. They also serve delicious Assiette de Foie Gras and Magret de Canard. But let’s return to our tartare, because exactly due to it I could avoid other temptations, while still enjoying the pleasure of a fine meal.

Dishes made from raw meat have long been a part of the cuisine of different countries, but only a few of them became customary: carpaccio and tartare. Even if the ancient nomadic past of steak tartar is relatively well known, its appearance in Europe is still questionable. Besides classical French beef tartare, the European cuisines have at least three dishes made of a minced or chopped raw meat: tartarka in Poland, tartare in Hungary, and hackepeter in Germany.

Why is a tartare so delicious?

First of all, fresh meat with spices has a very delicate yet piquant taste. It is dietary, healthy, and is easily digested. Moreover, ordering a tartare, you become a player in some kind of game, as it happened with us in Picardy, because a steak tartare is often cooked right before your eyes. Its preparation is a show and invariably attracts attention. Because of this, tartare belongs to a haute cuisine and definitely adds to the status of places where it is served. Naturally the requirements for quality and freshness of raw products are not just severe—they are savage, but as a client, you know beforehand that parasitic invasion is out of question.

However, people who order tartare for the first time often don’t know what they are talking about. That’s why waiters in Paris always clarify, to ascertain if their guests realize what will be served. If your hostility to raw meat only becomes clear at the moment the dish appears in front of you, a rising of a restaurant rating certainly won’t take place. 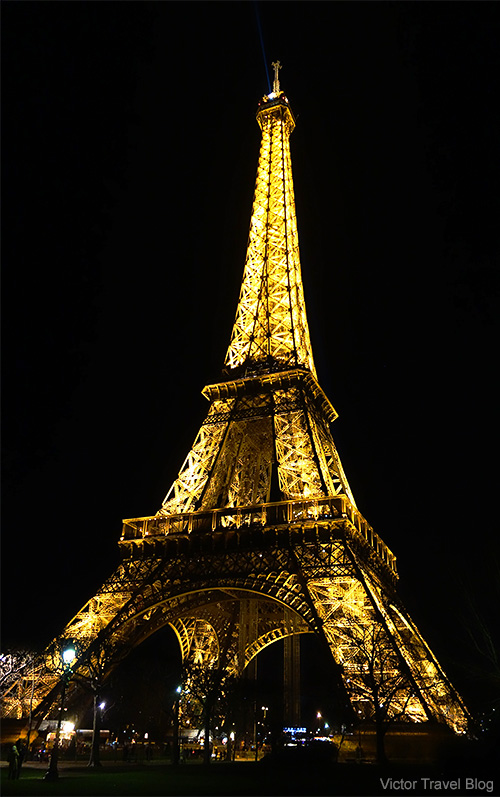 After so many impressions during the day in such an immense city, I would have preferred to dine at a time most comfortable for me, but dinner in Paris lasts from 19:00 till 21:00. However, whether you prefer a typical brasserie with closely placed wooden tables or an expensive restaurant with white tablecloths and possibly arrogant waiters—the chances of getting great food and artistic service are still high. It seems that, in contrast to their colleagues in Barcelona, Parisian waiters adore their work.

Still, why did we fail to make tartare if its recipe is so simple? Fresh minced meat with a raw egg in the hollow on the top of it was in front of me. All that was left to do was to mix meat with onion, capers, finely chopped cornichons, add fresh pepper, salt, virgin olive oil, and a drop of cognac. How could such a dish still be tasteless?

Eureka! We were not given the cognac! That’s why Victor had to have dinner twice. It’s not my fault! 🙂

Visit Paris at any time of a year. Come back and experiment! Bon Appétit! 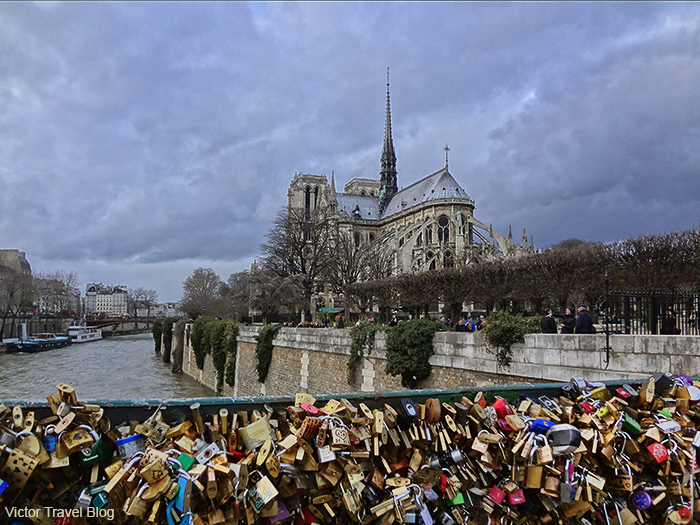 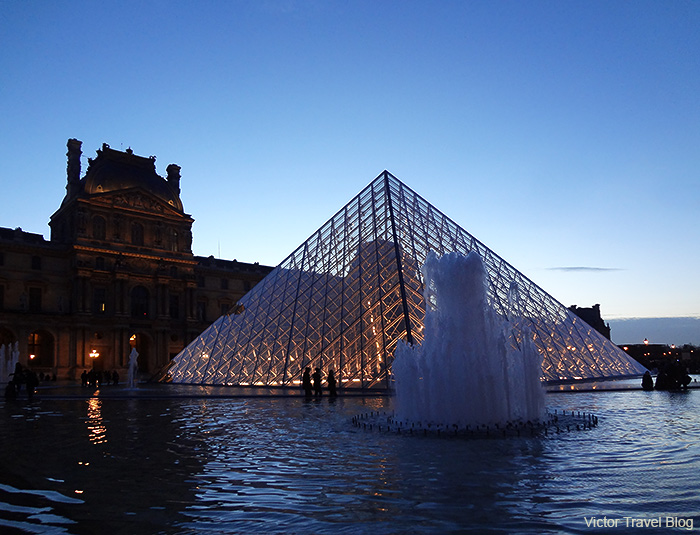 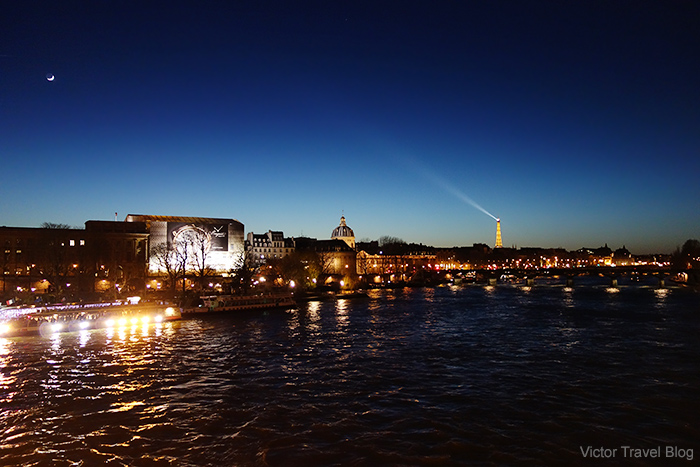 Why You Will Love Summer Rovinj
Italian Cuisine: Our Gastronomic Feat in Florence
Our Dinner in the Michelin Restaurant Eskis in Lyon, France