Brugge: Capital of Chocoholics and the Best City in the World

Sometimes, Brugge, the capital of the province of West Flanders, is called “The Venice of the North.” However, Venice and Brugge are absolutely different cities. Yes, Brugge is enlaced with canals too, and there is nothing more pleasant than to watch the boats gliding on the waters of its canals on a hot summer day. Of course, if you have your own house, or at least a rented one, it is very nice to sit on a small terrace close to the water. In this, Brugge is similar to Venice; however, there are other rivers flowing here: vanilla rivers between the chocolate riverbanks.

Plenty of times, I have tried amazing chocolate in France, Switzerland, and Germany, but Brugge is the real paradise for any sweet-tooth. Today, in the deep autumn, when Christmas is coming so soon, it is even clearer–the shop windows are changing like in a fairy tale, tempting the guests with sweet presents.

Yes, November means dampness and fog here, but still, we are in a phenomenal city. Remember three words: chocolate, lace, and beer, on which I invite you to focus, and then sample. Just in order to keep you warm let’s go into a café where I will propose that you try the amazing, perfectly cooked Belgian waffles.

You may spend the whole day near the fireplace, warming a glass of brandy in your hands, savouring the cinnamon smell, and licking the whipped cream from strawberries. But you should find the strength to go outside, probably into drizzling rain, because, trust me, the waffle temptation is only the first amazing thing in the Belgian capital of chocolate.

“Did you know that the local sweets are unique? You may eat as many as you wish. No allergy, only the good!” a nice salesgirl chirped in one of the candy shops. By the way, in Brugge, chocolate is introduced in very different ways, very surprising sometimes.

You should definitely buy the sweets by weight here. There are so many varieties of fillings. Take several kinds based on your preferences, and they will be gently packed into nice little boxes with a tiny bow on top. However, some candies could be compared with silver jewelry by price – yep, handicraft is highly prized in Europe. But to tell you the truth, I prefer a different handmade product – cheese.

Tiny Belgium, squeezed between two cheese giants—France and the Netherlands—is forced to compete with them unabashedly. It would be an unforgettable lapse to visit Belgium and not to bring the local cheese back home. However, such a souvenir has a rather strong fragrance, so in order not to confuse the airport service staff, remember to pack this dainty properly, and definitely in the baggage, not as a carry-on.

We tried to take our cheeses into the cabin in carry-on baggage in the airport of Brussels, but were stopped and forced to go back to check it in as a second piece of baggage. When the officer announced the additional price for it, I was astonished. It was higher than the price of the all our cheeses! “Sir,” I said, “I was living in Brugge the whole week. I have no money left.” He laughed and allowed me to check in the bag with the cheeses free.

A walking tour around the old center of Brugge will not take longer than an hour. The city is amazing. It is like a toy. Irina still can’t stay indifferent to every single old house, or a window with lacy curtains. This city at the North Sea is probably the only place in Europe where we feel comfortable in any weather and any time of the year.

Brugge fascinates with its unique, severe beauty. While walking early in the morning, you can lose the sense of time. Were it not for the cars parked on the roadside, you could think you were a couple of centuries back in the past, and the sound of the horse-drawn carriages, clip-clopping along the pavements, is like a binding thread between the present and past of Brugge. 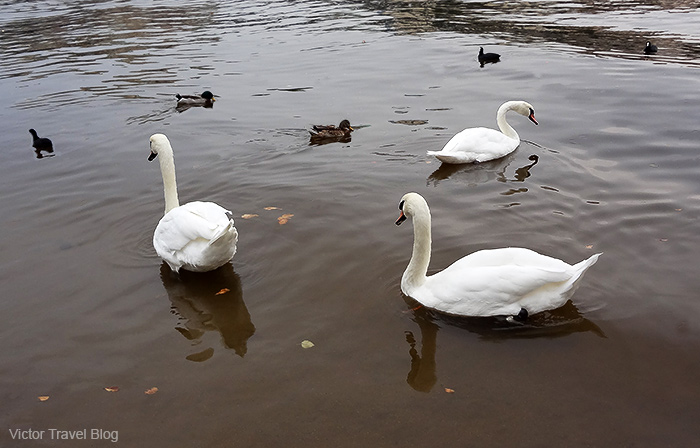 Strolling along in Brugge, you will finally come to the so-called Lake of Love or Minnewater Lake, inhabited by swans all year around. Even in winter time, these birds, pursing their chilled legs, look royal and graceful.

By the way, the lake has its own unique history. In the 15th century, the citizens executed the advisor of Maximilian I, the Archduke of Austria and the Holy Roman Emperor, in their city. The Emperor decided to eternalize the memory of his delegate. Since the name of the advisor was Pieter Lanchals, which is translated as the “long neck,” and swans adorned the Lanchals’ family crest, the Emperor obliged the citizens to start raising swans at all the lakes and canals of Brugge, and feed them until the end of time. Nowadays, Brugge’s citizens have already forgotten this history, but they still love and feed the swans.

One time in August, we lived in a hotel near Lake of Love. Hotel Egmond is a wonderful place with several rooms and suites of varying degrees of luxury. The windows look on a quiet park, which is a rarity for an ancient medieval town with its narrow streets and toy houses standing close together. 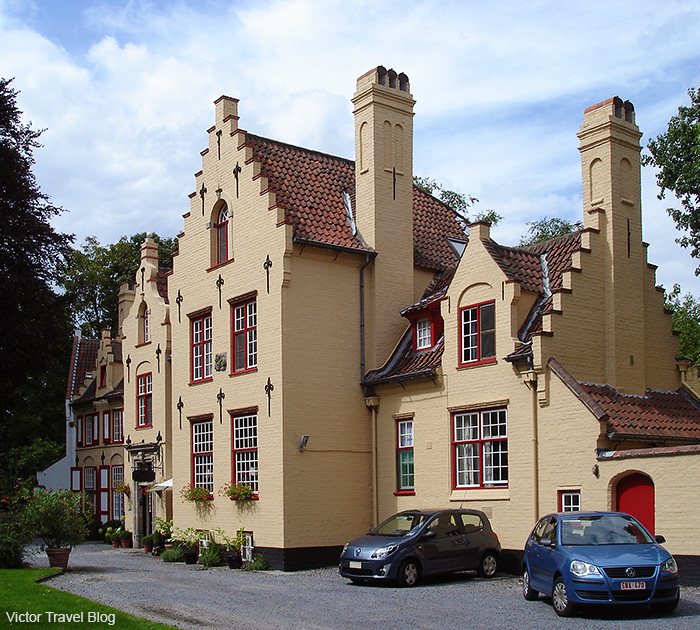 The cozy lobby with fireplace and around-the-clock tea

But this is in the weekdays. On Saturday morning at 9.00, a lot of the local people come to the park to play something similar to baseball, but the bats and distances are ten times smaller. However, they root for the teams at full strength, and the cheerful megaphone broadcasts something in the local dialect… Then comes the brass band…

Hotel Egmond is a great place for a quiet rest; but on Saturdays, you will be waking up with the brass band accompaniment.

One of the compulsory points of all excursions around the city is the Church of Our Lady which houses the statue of Madonna and Child created by Michelangelo. But the great Italian created plenty of statues, and I saw a lot of his masterpieces while travelling around Italy during the last years. Turn your attention to the peculiarity of the Belgian churches. All of them, even the smallest, are decorated with the original works of the Flemish painting masters. I bet there are few churches, or even any museums, in the whole world decorated with paintings as expensive as those in Brugge’s churches. It is all the more noteworthy in this relatively small city of one hundred thousand.

The Golden Age of this part of Europe took place in the 15th century. Crafts and trade were developing rapidly, and the rulers of all European countries preferred the lace created by Brugge’s craftswomen to other laces of the world.

Are you hungry yet? When you are done with a beer of some unbelievable sort, fried rabbit stewed on the old open fireplace, and a pot of mussels, the feeling of unreality of what is going on will come again. Admiration with a light intoxication—this is my impression of Brugge in autumn. Beer doesn’t impress you, and you want something special? Well, after all, when there’s a demand, there’s a supply.

Not every capital of the world is able to impress you by the availability of so many restaurants marked with the stars of the universally known restaurant rating, the Michelin Guide. The Michelin Red Guide is periodically accused of a biased approach, but when it comes to figure skating, for example, aren’t there constant rumors about biased refereeing afloat?! Every rating is questionable, but thousands of people throughout the whole world strive to visit, at least once, a restaurant rewarded with the Michelin stars.

Tiny Brugge can impress you with six restaurants rewarded by the Michelin Red Guide. For example, if you have lunch at the De Karmielet on Langestraat, 19, you will know what the real three-star cuisine means, and be able to give a decisive answer to the question, whether Michelin is right in its appraisal. Welcome www.dekarmeliet.be

You may spend several hours or several days in Brugge, but still you won’t be bored. They always prepare the skating rink on festive Grote Markt, or Market Square, close to Christmas, and it is already in place in the middle of November.

Here, on the Grote Markt, you may take a look at the Salvador Dali Exhibition under the Belfry Tower. The exposition is not that vast, but if you are fond of the paintings of this famous Spaniard, there will be quite a lot of interesting pieces. You may even buy the copies of those you like best, but the price will be surprisingly high. Yes, Brugge is an expensive city. The prices of the souvenirs can really amaze sometimes, but even during the severe autumn, this city gives you a great number of positive emotions.

Adventures of Fitness Alcoholics in One of the Baltic Capitals
One Day in Gray City of Mozart, Salzburg
Why You Will Love Summer Rovinj

22 Responses to “Brugge: Capital of Chocoholics and the Best City in the World”

« Temples of Cambodia: Angkor Wat or Beng Mealea?
Antoni Gaudi Paid a High Price for His Genius »
%d bloggers like this: