The best views of the wonderful city of Dresden are from the Аugustus Brücke (The Augustus Bridge) where we are staying now.

There were several tragic pages in the long history of Dresden, but the real catastrophe took place here from February 13th to 15th, 1945. British and American bombers dropped 3,500 tons of fire- and explosive bombs on the city. Legendary Dresden remained only a memory.

I should mention that we went to Dresden only to look at the Sistine Madonna by Raphael. The Old Masters Picture Gallery in the famous Zwinger Palace is open for visiting again after many years of restoration. So, Victor’s favorite painting led us to the city which was in ruins after being bombed only 68 years ago. It is a miracle, how Dresden looks now. You see the old pictures and do not believe your eyes. I suggest a walking tour of the capital of Saxony.

The stone bridge connects the shores of the Elbe since the 18th century. Johann Bach, Richard Wagner, and Johann Strauss admired the view of Dresden from this place many years before you. If you cross the Augustus Bridge you will find yourself on the small square in front of the King’s Palace.

Saxony reached the peak of its development during the reign of Augustus II the Strong. He dreamed of transforming his city into a megalopolis whose Baroque treasures could rival those of other cities, and he succeeded. Already during the life of Augustus the Strong, people started to call Dresden “Florence on the Elbe.”

Stallhof and Procession of the Dukes

To the left of the palace’s main gate, you will see a big courtyard that earlier was a place for knight turnouts and other courtiers’ entertainment, Stallhof (Stall Courtyard). Today we are interested only in its northern wall with the famous panel of the Procession of the Dukes (or the Procession of Princes). Several centuries, all representative of the Wettin Dynasty, move along the Augustusstrasse on their noble horses. What proud, brave, and beautiful faces.

This unique piece of artwork was created in Dresden in 1589. At first, it was made with the help of a very complicated technique, Sgraffito, but after 300 years, the Procession of the Dukes was on the verge of collapse. No, not from the bombing of Dresden; the dampness of Elbe River practically destroyed the masterwork. For many years, the panel was under restoration, but the works of the 19th century survived no longer than the original ones. At that time, someone proposed an ingenious solution−to transfer the picture to porcelain tiles.

In Meissen, the most famous porcelain factory in Europe, 23,921 tiles were made, and the new great piece of art appeared on the wall of Stallhof in 1907. What is especially interesting is that the Procession of the Dukes survived the awful bombing of Dresden at the end of World War II. Not one plate fell down.

Direct your attention to those three men. This is the Prince Elector Frederick II with two his sons, Moritz and Augustus. One of them−the future resplendent ruler, King Augustus II the Strong, Prince Elector of Saxony, and the King of Poland−never had any expectation of inheriting the throne. However, his 32-year-old brother Moritz was mortally wounded in a battle and died. The throne passed to Augustus. Nobody knew the great fate that awaited the city of Dresden.

To the right of the main gate, you will see the monumental Hofkirche (The Catholic Church of the Royal Court of Saxony). A Catholic cathedral in the very center of Lutheranism in the 16th century? Fantastic? It was so.

Like all Wettin, our hero, Kurfürst August, was a protestant, but one day he resolved to be the king of Poland. Why Poland? Poland had an interesting tradition: anyone could offer himself as a candidate for the Polish throne. It was something like an auction, but with one condition: you must be Catholic. Augustus converted to Catholicism.

That was a great shock for the Lutherans of Saxony, but everything ended without public unrest. Soon, the people of Saxony felt all the benefits of having a Polish and a Saxon king in one individual. Augustus dreamed of having all the splendor of the Louvre and Versailles in Dresden, and the Polish treasury was most opportune.

The scale construction started on the Palace Square in the reign of the Augustus’ son at the end of 17th century, and continued for 60 years. As a result, we can admire the wonderful church with 78 three-meter statues of saints and apostles on the balustrade. The crypt stores the 49 sarcophagi of the former kings of Saxony. Only one is missing−the sarcophagus of Augustus the Strong. It is in Krakow, Poland, but the heart of the famous king is here, in the crypt of the Hofkirche of Dresden.

Unfortunately, neither Catholic nor Protestant churches of Dresden survived the Allied bombing in February 1945. Hofkirche was almost completely destroyed.

One main attraction of Dresden, Zwinger Palace, is located near the Hofkirche. The world-famous Old Masters Gallery has a unique collection of paintings including the priceless Sistine Madonna by Raphael. This painting is ingenious; but do not expect to find a pacified Madonna’s face pleased with her chubby baby.

The emotions of Raphael’s heroes are very clear: little Jesus is horrified by the fact that he must come into this world; the face of Madonna is fanatical, and you can read in her eyes, “I am parting with the loved one, but I must and I will do it.”

We went into the Sistine Madonna’s hall three times, but only the last time− thanks to some guide−we heard that the clouds around Madonna with Jesus are not simple; they consist of children’s faces. You can count only 17, but modern devices of art specialists show 49.

So, if you are in Dresden and are pressed for time, or you are not a big fan of the arts, you should at least see this miracle and probably The Chocolate Girl by Jean-Étienne Liotard. Rubens and others, please forgive me.

The Saxon Shipping Company wharf is still located on the embankment of Bruhl’s Terrace. People say that half of these ships have the old steam engines. Of course, this is not because of the poverty of Germany. The oldest ship has an engine which was made in 1875−and it works! From Bruhl’s Terrace, a small street will lead us to the Frauenkirche.

The Frauenkirche (Church of Our Lady) is the most significant Protestant church of Germany and the symbol of Dresden. Its construction began in 1726. The height of the dome was unreal for those times, 95 meters. The church could hold 3,500 believers. The war did not spare the Frauenkirche. The symbol of Dresden was destroyed during February’s bombing. People said the Allies were bombing the Frauenkirche for three days, and on the fourth day, there was only a pile of stones and ash.

Why Dresden was bombed

It is very strange. We viewed the old Dresden in just one hour. It is so small. Is it possible to hide dozens of panzer divisions here, which needed to be annihilated by the massive bombardments? How many soldiers were hidden here to justify the Allies’ air force to turn one of the prettiest cities of the world into dust?

By the beginning of 1945, the outcome of the war was clear; Germany had lost. The Allied air forces were bombing Germany’s cities every day, the Red Army was moving from the East. Saxon Dresden was an island of serenity in the middle of the nightmare of the war. There were no military factories in Dresden, only a big camp for POWS, and an enormous number of refugees.

By February 13th, the flow of refugees fleeing from the Red Army and staying within 60 miles of Dresden, increased the local population to almost a million people. The first air raid alarm was the beginning of 14 hours of hell. In that moment, many citizens thought it was a mistake, because Dresden had not seen a single bomb during the war.

Is it hard to believe that two great gentleman such as Winston Churchill and Franklin Roosevelt, decided to execute Dresden in the last days of the war? What were the reasons? Policy? After all, Dresden’s industry was producing nothing but cigarettes and porcelain. Seems the bombing was an act of intimidation, aimed not at the Germans, but at Stalin.

After the air raid, a three-mile pillar of smoke rose into the sky, seen even from hundreds of kilometers away. In this night, the war had a rich harvest. Historians say about 135-250 thousand dead and nearly a million wounded. It is twice as many as in Hiroshima, 71,879. I read somewhere the bombing of Dresden was in response to the bombing of English Coventry. During the whole war, 1,236 people were killed in Coventry, and Coventry had more than dozen of the aircraft plants. In other words, it was a military target. As for Dresden−it had only porcelain cups and dishes.

However, the Germans are very accurate people. Right after the war, they took all the stones of their churches and palaces, marked each of them, and took them out of the city. When the modern government of Germany decided to restore the historic center of the city, all they had to do was collect all those stones and build their Frauenkirche−together with the rest historical buildings−a second time.

From the 1990s, the Germans attracted donations for the reconstruction of the Frauenkirche from all over the world. Groups such as “Dresden Trust” in England and “Friends of Dresden” in the USA soon formed. Thanks to their selfless dedication, it was possible to raise the estimated DM 250 million needed to finance the project mainly from private sources.

A very wise idea came into someone’s mind: to start to make wristwatches with a small piece of Frauenkirche on the display, and sell them. The church was restored a long time ago, but you can still buy this watch, and we did. Now, a tiny particle of the brilliant city on the Elbe River is always with me. 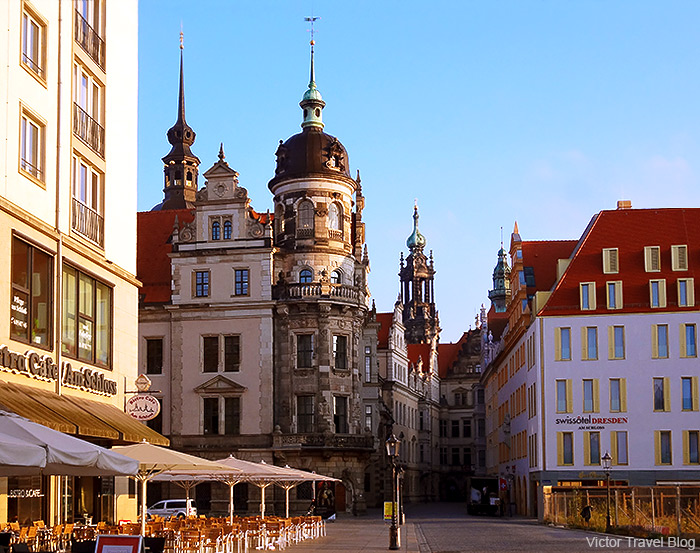 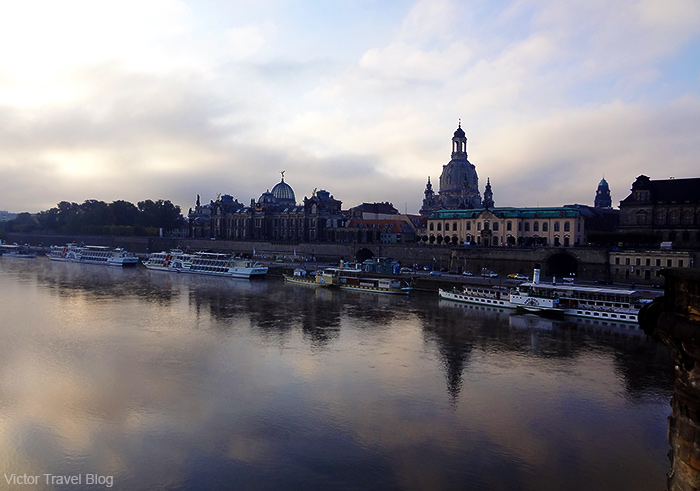 42 thoughts on “Dresden: 68 Years After Firebombing”