Amalfi Coast or the Most Awful Road in My Life 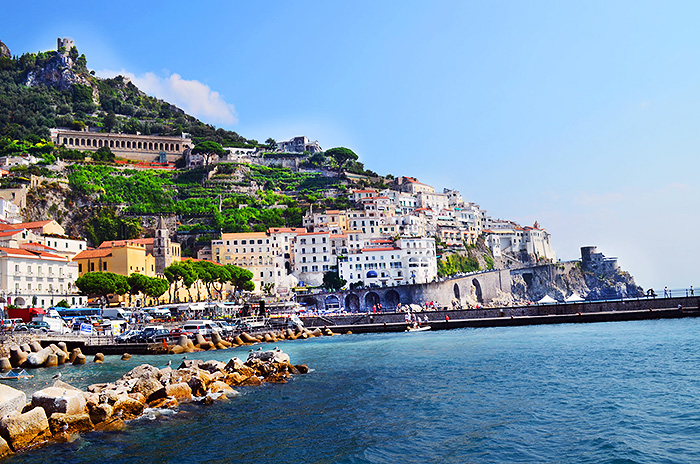 Ladies and gentlemen, thank you for coming. Our topic today is the Amalfi Coast of Italy. My God, who doesn’t know the beautiful Amalfi Coast? Excuse me, sir… What? You don’t know? Well, if you will ask His Majesty Google to show you the Amalfi Coast you will see several million beautiful pictures showing levels of multi-colored small houses, cottages, palaces, and churches, among picturesque rocks rising out of the sea—rocks covered with lemon trees (this is the region of the famous liqueur, Limoncello). And sun, sun, and sun, always and everywhere.

This is the Mediterranean Sea, and this is Italy. Small cities of the Amalfi Coast remind me of a handful of colored toys that God took and threw into the mountains. It worked well.

However, you will notice one strange thing: almost every picture is taken either from a helicopter or a yacht; that is, from the sea. What did you say, madam? You have noticed it too and want to visit this nice coast? I understand. My wife felt the same: she saw, wanted, and we started our journey. However, we did not take the yacht, and have not used our helicopter (joking). We rented a small car.

Dear Lord, thank You very much for Your kindness. You are so wise and farsighted. Thank You for sending us a SMALL car. Thank You, thank You…

What did you say, sir? Oh, yes, forgive me this small prayer, but it is a very important moment. You will understand later.

After visiting a very hidden, mystical, and nice place, Grotte dell Angelo (The Angel’s Cave), near Petrosa, Irina said that we are just a step away from her dream, the town of Amalfi on the famous Amalfi Coast. No problem, we and our small Fiat Punto said. Punto knew what was waiting for him on this route; it is an Italian car. But I didn’t know.

Image 50 kilometers of narrow road serpentining along the rocks that rise almost vertically from the sea. This road follows every turn of these mountains, and there is not one tunnel or bridge. The road is carved into the rocks, so that two millimeters from your right rearview mirror you see enormous stone boulders and think, “Can I preserve my mirror today?”

My Lord, thank You that You have not sent a big, long, comfortable, splendid Mercedes to us, but gave us…

The road to Amalfi is two-lane. We all drive one behind the other at the same speed, trying not to damage nature – big rocks on the right – by our rearview mirrors. You can’t overtake anyone because a corresponding line of cars moves from the opposite direction in their lane. They fear damaging a road fence with their right rearview mirrors, so they try to move a little closer to the center median, that is, to your left side. Needless to say that only a couple of millimeters separate us.

There are big tourist buses here too. Oh, my Lord. Next sharp turn to the right, everybody stops. The bus ahead is not able to pass another one. It hits reverse, and behind it, all fifty idiots who have dared to go to Amalfi by car, do the same. Do you think this situation took place only once? No. By the way, this was in April, in “the off season.” They say there are many more people here in peak season! Is it possible? Do you really think that all THIS can be called “a few people?”

Have you ever driven inside a henhouse? No? After that road to Amalfi I can say earnestly, “Yes, I have.” When you drive on this winding, narrow, car-filled road, hemmed in by vertical rocks on one side and a 350-meter bluff on the other, something is continuously going on in front of your car’s bumper and wheels. People, children, moms with baby carriages, tiny dogs, cats, bicyclists, naturists, and parachutists (OK, maybe not the last two) appear and disappear from your way.

Excuse me, madam, what did you say? Why they don’t use the sidewalk? That’s a very good question. The answer is not bad either. There are no sidewalks there. There are only road, bluff, and rocks.

What? How about the food there? In Italy?! Oh, sir, are you serious? In Italy, even if you find a restaurant in a crater of a volcano preparing to explode, you will get wonderful pizza, pasta, and wine. The same is in Amalfi. 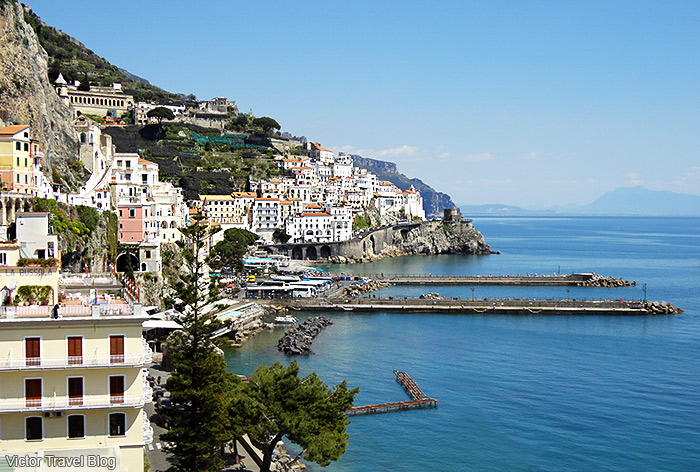 Beaches? Madam, have you pronounced the word “beaches?” This is something very sandy, yellow, wide, long, and near the sea, is not it? No. Not on the Amalfi Coast, at least. Although wait a minute. We have seen one “beach” in Amalfi style. It was about two meters wide and five meters long, and was occupied by approximately fifty people sitting on stones, large and small, near the sea. That’s supposed to be a beach. Unfortunately, this is not Bora-Bora.

What did you say, sir? Why did the aforementioned fifty idiots go to Amalfi? Here is the reason.

Let’s begin with the fact that the Amalfi maritime republic (Duchy of Amalfi) is older than the Genoese or Venetian republics. It had a very big fleet and an active trade with Byzantium. There is a legend that the Amalfitans were the first to use a navigation compass. The Amalfitans’ sea maps are the oldest in the world, and they were used by all Mediterranean seafarers. 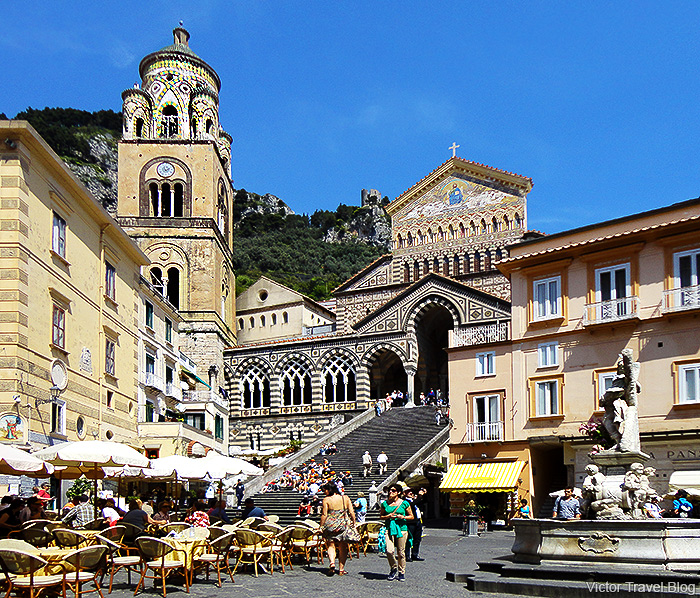 The Republic of Amalfi reached its peak in the 11th century when its fleet took part in the transportation of the Crusaders to the Holy Land. But this peak didn’t last long. An awful tsunami destroyed most of Amalfi city and the seaport; they collapsed into the sea. Now, we see only a small part of the city, the part which was located in the mountains in those times.

Duomo di Amalfi-the pearl of the Amalfi Coast−was that very goal for Irina, and not only for her. The embankment is full of tourist buses; however, you will get the best view only from the sea. 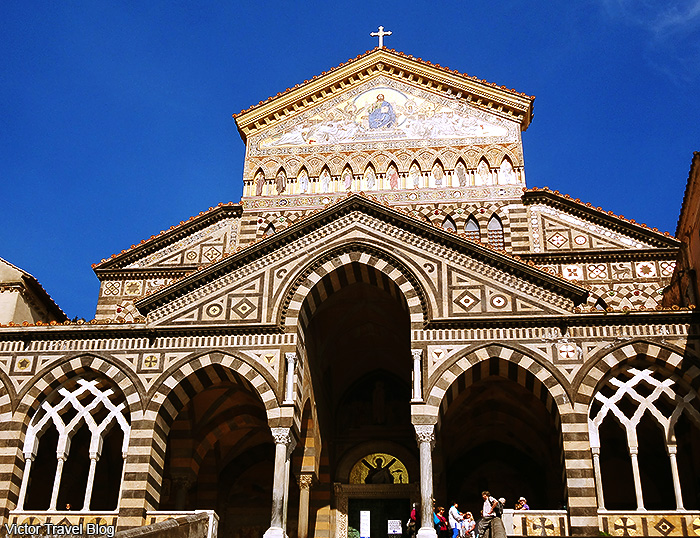 There are many people in the square in front of the cathedral (Piazza del Duomo). Why? The cathedral is dedicated to the Apostle Saint Andrew, the first of Christ’s apostles, and his relics are kept here. They were captured by the Crusaders during the Fourth Crusade, and transferred from Constantinople to Amalfi in 1206.

One interesting fact: the remnants of Saint Andrew stopped giving manna after the abduction from Constantinople. Seems, God didn’t like those methods of transportation. However, St. Andrew so much liked being in Italy that manna appeared again after a hundred years.

Now let’s go to the cathedral. Something special awaits you inside. The cathedral’s bronze doors are almost one thousand years old. They were made in Constantinople about the year 1066.

One of the pilgrims touches the icon of Saint Andrew on the doors. The metal is shiny after millions of such touches.

There are luxuriant and life-loving baroques inside the cathedral, but you will find some very well preserved frescoes of 14th century too. What a wonderful experience to get married in such a cathedral. 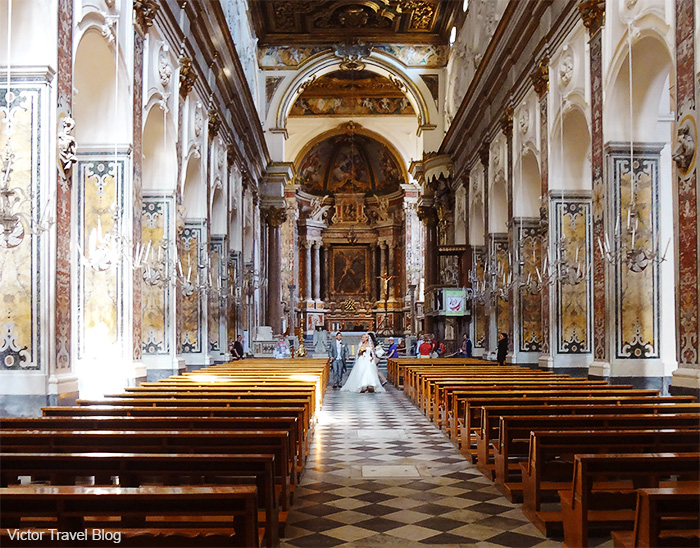 Newly-married in the Amalfi Cathedral

The crypt of the Amalfi Cathedral

The frescoes in the Amalfi Cathedral

Yet, the most beautiful part of the Amalfi Cathedral is the crypt of the 13th century. All walls and the ceiling are covered with the frescoes and decorated with fretwork. The relics of Saint Andrew the Apostle have been kept here almost 1,000 years. His sculpture by Michelangelo Naccherino−pupil of the famous Michelangelo−is located in the center. The author of the marble sculptures of St. Stephen and St. Lawrence is very famous too; it is Pietro Bernini, the father of great Gian Lorenzo Bernini. The beauty of the Duomo is unique even for Italy.

Now, ladies and gentlemen, you know all the things to do on the Amalfi Coast: take a yacht; travel along the coastline admiring its beautiful views from the sea; and go ashore only for a dinner, and to visit the Amalfi Cathedral.

The Laocoon Group–My Favorite Greek Mythology Sculpture of the Vatican Museum
Venice: At the Dying Beauty’s Bedside
Our “Thorny” Way to Lake Maggiore in Italy

« Decorated Ceilings of the Vatican Museums or Interview with God
Dresden: 68 Years After Firebombing »
%d bloggers like this: