Decorated Ceilings of the Vatican Museums or Interview with God

Vatican museums are among the richest in the world. Not surprising. During the last two thousand years, the Christian sect from Palestine, which has developed into one of the most powerful organizations in the history of mankind, managed to make such big money−upon following the “covenants” of their teacher−that it was able to buy the most valuable pieces of art and collect them in its museums and cathedrals. Sometimes it even did not cost them a penny, because who could ever refuse such a powerful authority, asking for the donation of this or that masterpiece?! 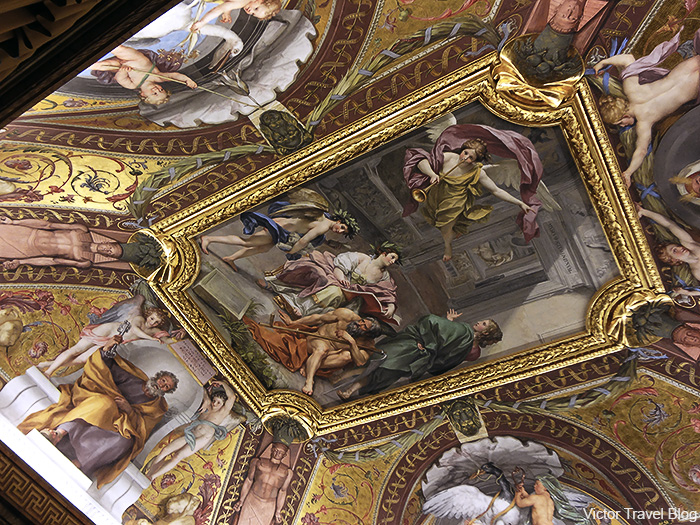 The decorated ceilings of the Vatican Museums

Maybe only thanks to such widespread “collecting” many of the masterpieces have not sunk into oblivion, but were kept in Vatican museums. However, the Catholic Church not only gathered masterworks, but also created them, since it was able to employ the most famous, talented, and expensive artists. Look at the decoration of Vatican museums’ ceilings.

When you buy a ticket to the museum you would be well advised to do it via the Vatican’s website, otherwise you will have to stand in a very long queue.

Upon entering the museum, you will find yourself in front of the signboard showing two routes: a short and a long one. The first provides a faster tour to the destination spot, the Sistine Chapel (Latin: Sacellum Sixtinum; Italian: Cappella Sistina), which was painted by Michelangelo among the other masters. 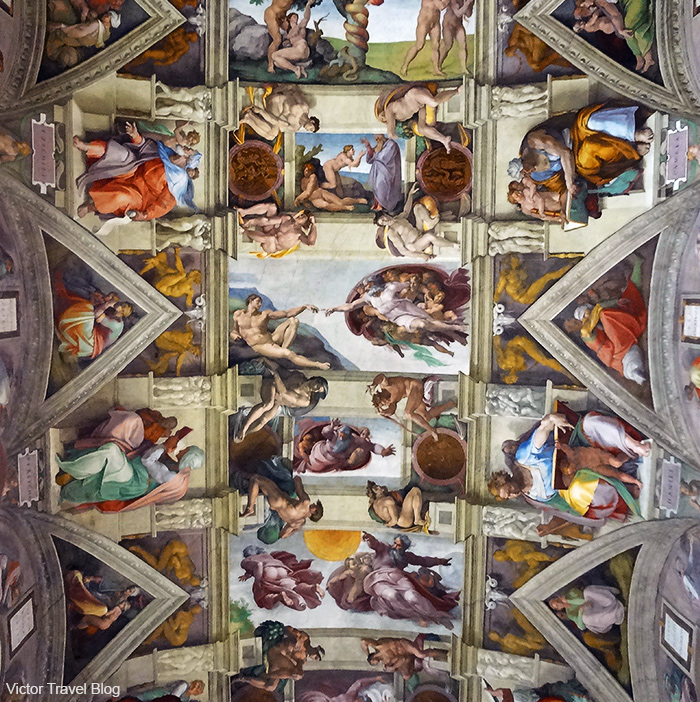 The ceiling of the Sistine Chapel in Vatican

It is the only place in the Vatican museum where photographing is prohibited. Is it not Jesuitical to promote an extensive advertising campaign of a separate room, assuring everyone that only this room provides the real and the main masterpiece in the Vatican museums;, to organize several-hour excursion tours to the final destination in this very room,; and in the end to announce that you are not allowed to take any photos here, in the Sistine Chapel?

Don’t yield to this provocation! Select the longest route to overview the halls of the Vatican museums, and you will see plenty of masterpieces which are often as magnificent as the Cappella Sistina, and without any photo restrictions. 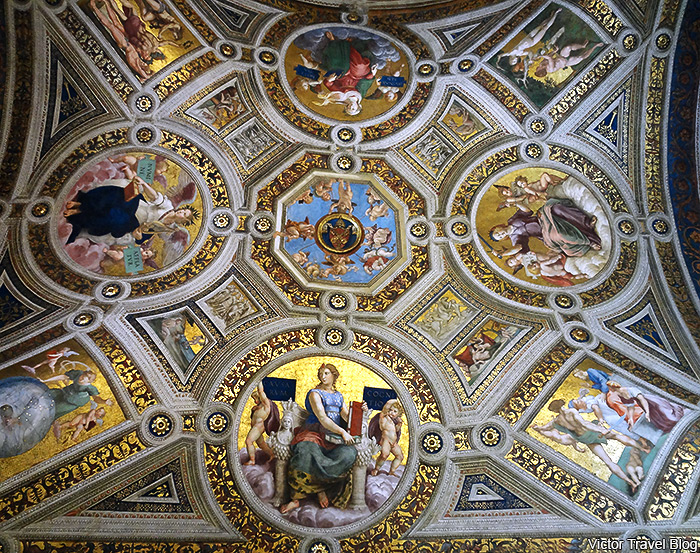 On entering every single hall, look at the ceilings. For example, the Golden Corridor. That’s what I called it. In fact it is called The Gallery of Maps (Italian: Galleria delle Carte Geografiche). Wall frescoes of geographical maps of the Italian regions are considered to be the main attraction of the gallery, but for me it was the ceiling painting. If it were not for the huge crowds and the rules of behaviour in public places I would simply lie down on the floor and examine every single detail, every single fragment.

Just imagine the service “Movable chaise lounge of the Vatican Museum,” a wheeled chaise lounge, where you could lie and move along a hall, viewing the fragments of the ceiling painting in maximum comfort. Well, a kind of beach chaise lounge but with rubber wheels. A special servant behind you slowly drives this chaise lounge like a gondolier on a Venice canal. If you wanted, you could stop under some painting and then “swim” further, savouring the pleasant emotions. Payment could be based on time spent: the longer you savour, the higher the bill. Moreover, the chaise lounges could be paired, for spouses or for you with a personal guide.

The Gallery of Maps of the Vatican Museums

I would drive slowly along The Gallery of Maps, all 120 meters, and come back the next day to check the impressions−like visiting heaven. However, since we are so close to heaven now−it is the Vatican after all−then maybe I should talk to God, and try to get an answer to the question that has dogged me a very long time. Suppose He would answer here. I’ve tried, and He did.

“Dear Lord, I don’t understand one thing. In 1189, about 100,000 men (including 20,000 Teutonic Knights), led by King Frederick Barbarossa, went to the Holy Land to reclaim it from the Muslims. Only 5,000 of them reached Palestine. Looks like You did not help them in their holy mission. Why not?”

“Why do you think it was a holy mission? Is it because somebody in the Vatican said that? What was the aim of the Crusades? To release the Holy Sepulchre (that is mine)? But I did not have any sepulchres, as well as the Son, nailed to the cross. I do not have any children at all, I am one and undivided. Do you know what it means? There is no holy land, no gentiles, and no other religion. There is only Me. All the rest is a figment of a man’s imagination.

“Why did they come up with it? There are two ways to control people: the sword, and belief. They’ve tried the sword, and it worked out but not very effectively. People are afraid and obey, but only one false step and they will catch you and hang you upside down, or shoot you after a fast trial (more often even without any trial), or poison, or suffocate you.

“Belief is quite a different thing. A belief in You (or in someone You represent) enables people to sacrifice their lives for an idea announced by You. They are not scared; they BELIEVE that’s the way it should be. Is anyone ready voluntarily to step into the fire for fear of You? No way!

“And now imagine you’re a tribal leader, a king, a chancellor, an emperor… What reason could you give to your troops to make them leave their families and go with you several thousand kilometres away: health, happiness, enlightenment, heaven? Maybe, but you will be followed by 100 people at the most. In order to engage thousands, you need to promise them wealth for the rest of their lives, slaves, new women during their lifetime and heaven after it.

“That’s what has been done from the beginning of time, when you wore animal skins and had no footwear. Well, let’s take our big cudgel and go over that mountain. There are some nasty neighbours, who have plenty of food and women. We will grab all that, kill the others, and will stay living there if we like.

“However, with the development of your intelligence it became indecent to put forward robbery as the main purpose of a visit. You needed some higher goals, but what could be higher than heaven? And who lives there? Right−a supreme being, who will incredibly like your scenario of visiting nasty neighbours, killing them, taking their women… well, you know.

“But in order that supreme being help your victory you’re going to burn these worms as a religious offering to make the God (means me) enjoy their stinky smoke. Would you like me to burn a handful of worms right under your own nose? No?! That’s strange, isn’t it? However, you were burning even the cows. Each tribe invented its own god who liked the scenario of visiting nasty neighbours, killing… hmm, sorry, it seems I repeat myself.

“So, 100,000 healthy, strong men, not able to do anything except for killing other strong men, suffer from a lack of work; not only in Germany, by the way, but in all of Europe. And just then, “purely by accident,” a man in the Vatican announcing himself as my representative on Earth suddenly remembers a necessity to rescue the Holy Sepulchre; not even mine, but of my Son allegedly conceived by me without even taking off my pants.

“Are you already laughing? But so many people died. Have they rescued that sepulchre? No. Some people came from the opposite side; “their god” also needed that sepulchre.

“Yes, you’re right, what vanity. And just imagine what I should feel sitting here, watching all this? Imagine that in the green grass of your backyard you have two huge anthills inhabited by hundreds of thousands of ants who are the offspring of those two little ants−Adam and Eve−brought by you in a jar from your friend one day. Then, you’ve returned after a vacation and found numerous offspring of that prolific couple living their own lives: building, working, eating, drinking, having fun, etc.… Suddenly, 100,000 of ants from one anthill attacked their neighbours. Would you make an attempt to part the combatants? Well, I also did nothing.

“I really can rule the world (or these two anthills). I can pass the water off after a strong rain; I can put up a sunshade in case of exhausting heat; I can bring you some good soil to ease the construction works; I can bring you a sackful of larvae if I notice you’re out of food… But I can’t and won’t secure a victory of one anthill over another; a fortiori considering such a poor ideological background.

“I don’t control you. You are under control of those of you who strive for power and finally get it, if you let them.” 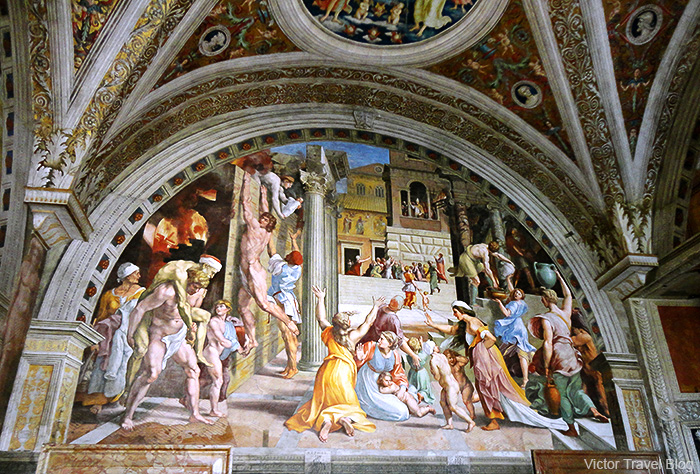 « Le Mont Saint Michel—The Grave of God
Amalfi Coast or the Most Awful Road in My Life »
%d bloggers like this: