Plitvice Lakes—An Obstacle Course on the Way to Water Paradise

Water, lakes, waterfalls, and forests can be found in other places, but
Plitvice Lakes are unique in the whole world.
—Ivo Pevalek 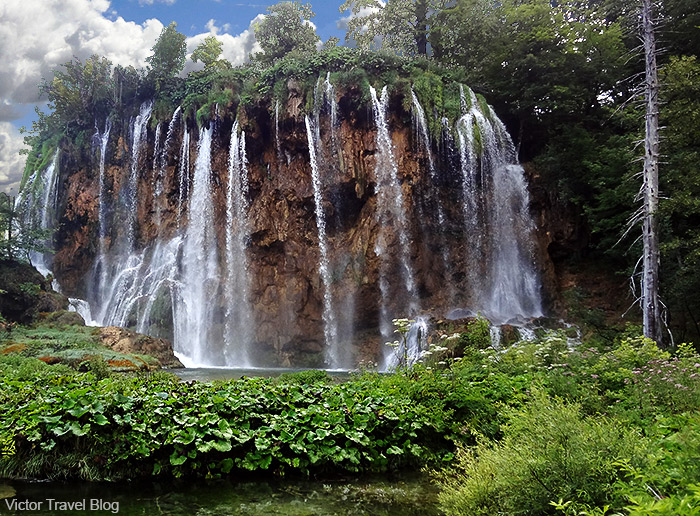 I don’t know how we managed to leave the Adriatic Sea and the wonderful Croatian white wine Malvasia in order to personally check out the perfection and uniqueness of Plitvice Lakes, the most famous national park of Croatia. Why did we do it? Why are these Plitvice Lakes worth visiting?

What do you think about the prospect of spending the whole day in a territory filled with more than 16 large and small lakes, 140 waterfalls, and 20 caves? Moreover, you probably have never breathed such air. Being located at an elevation of 1,200 meters above sea level and having a beech and pine forests, Plitvice Lakes is a real empire of clear water and air. It is a self-healing ecosystem where new waterfalls are born every year.

Plitvice Lakes figure regularly in such top lists as 10 best waterfalls of the world or 10 places to see before you die, and such ratings are absolutely well earned. But chaos (absolutely atypical for Croatia) rules in Plitvice Lakes in August! It seems that in summer, the trip to this water paradise turns into an obstacle course.

Despite the fact that Plitvice Lakes are not so easy to reach, we were struck by the number of visitors. The park is located in the center of the country: 145 km from the Croatian capital Zagreb, almost the same distance from the city of Zadar, 200 km from Rovinj, 230 km from Split, and the same from Slovenian Ljubljana. If you are an experienced driver, you should use a car. The route from Porec, Rovinj, or Pula takes about three hours. Assuming that Croatian roads are quite modern and they do not have heavy traffic, why does it take so long? Because of the serpentine roads.

If you prefer to travel with a tourist agency, prepare for a five-hour trip to the park and the same on the return, and you will only have a couple of hours for the lakes themselves. We did not even consider such an option. For those who want to take a good rest and get the maximum pleasure, the optimal decision would be to rent a car in the airport of Zagreb and take a short auto trip along the highway to Karlovac. From there, it is only 70 km of picturesque driving to the world-famous cascades of lakes overflowing naturally, one into another. Welcome to Plitvice Lakes National Park of Croatia! 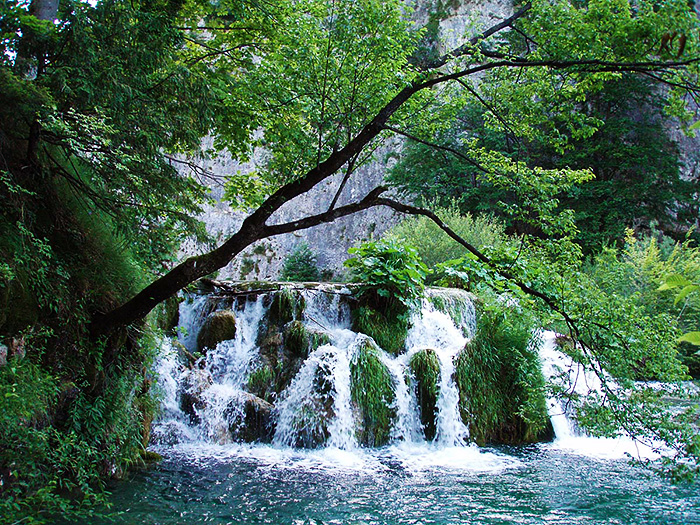 Its better to stay here for a minimum of two days and three nights, but our super-optimistic plan included the visit of Plitvice National Park and a trip to neighboring Bosnia and Herzegovina, all in one day. Bad plan. Upon reaching the park after several hours of driving, we were amazed, simply gaping—the temporary parking at entry number two located in the forest was overfilled. The first 30 minutes, we spent slowly driving along the narrow paths between the old trees, searching for the free parking space. The next 30 minutes, we spent in line for the tickets.

The line was international: Japanese, Chinese, Poles, Slovaks, Brits, French, Spaniards, and Russians. For 110 Kuna, you can buy a ticket to the paradise for one day, and for 180—for two days. One hundred and ten Kuna is about 16 Euro. Of course, there is a discount for children and students.

In total, we spent three hours getting to Plitvice Lakes, and one for parking and getting tickets. It was 13:00 on my watch, and I wouldnt have minded enjoying a lunch. Now imagine a line of tired and hungry people in a small café with a very poor assortment of offerings. Sure, we should have had a snack somewhere on the way to Plitvice Lakes, and we even tried to do it. We stopped near some pretty hotel with a restaurant just to find out that the latter was only for hotel guests. So, we were restricted to coffee.

Well, once you have your tickets, you need to guess where the park entrance is. I will help you: starting from entry number two, you need to cross the hanging bridge over the road. There you will notice the first signs of civilization in the form of a couple of hotels and several half-empty restaurants, but in this moment you want to see the lakes themselves rather than spending your time in a café. The lakes are somewhere close. You can even hear the noise of their waterfalls. 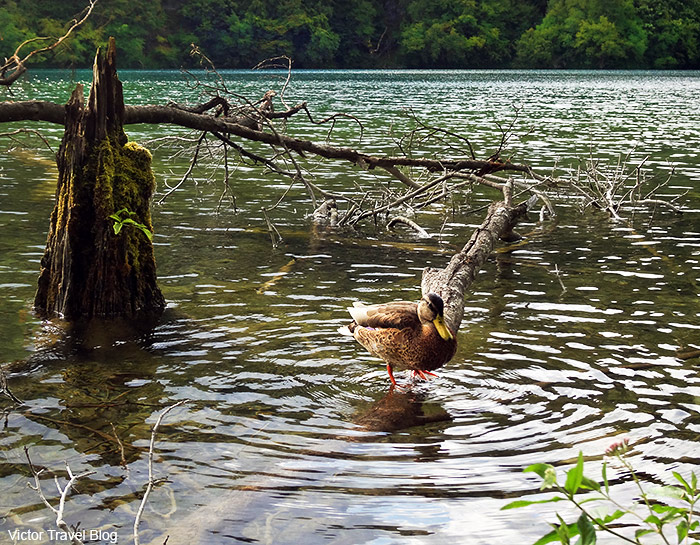 The lakes could be reached by special buses or ferries depending on the route you will choose. You have to choose the route because it is impossible to see everything in one day. Each of the recommended routes has its own duration—2-3, 3-4, 4-6, or 6-8 hours. However, you are also can walk if you wish.

Im not sure how it’s done with tourist groups, but individuals must conquer places in a transport to get to the lakes. A bus is supposed to arrive every 30 minutes, but in fact, we waited for an hour. You need to occupy the seats in a bus, otherwise you will be asked to leave it and wait for the next one. A bus wont move until every standing passenger leaves it.

In general, organization here reminds one of chaos; however, when you finally reach the desired place, all the rushing will fade away. You will forget everything and be surprised that you are able to walk ten kilometers without any signs of weariness. This is the magical influence of the water. It “washes away” all negative feelings.

Only now, having found yourself surrounded by idyllic nature, you realize all your advantages over tourist groups. They have only a couple of hours at their disposal, they must follow their guide in a rush, and five hours of the return trip are already awaiting them, while you are free and have nowhere to be in a hurry.

Plitvice Lakes National Park in Croatia initially became the object of research of many scientists, and it was only after that, it turned into a Mecca for tourists. It is thought that this unusual ecosystem has existed for a long time. Anyway, the last ultra-modern research showed that Plitvice Lakes are no younger than 7,000 years. The park became a UNESCO World Heritage site in 1979 and was included in the top ten places called Water for life by the United Nations. No wonder that this place is overcrowded with tourists. Unfortunately, managers of the park obviously are not able to handle such a flow of visitors.

The park occupies the 300-square-kilometer territory. It is a huge complex of lakes, waterfalls, forests, and fields with an amazing variety of flora and fauna. The stunning noise of the water and nearly the same volume of bird songs follow you all over the place. Merging into cascades, the famous 16 Plitvice lakes make up only 1.5% of the park territory. The lakes stretch out for 10 kilometres and are divided between the Upper and Lower with 156-meter difference of elevation between them. Four lower lakes are located in a distant canyon with its cliff shores of at least 50 meters in height.

This ecosystem continues to exist thanks to people caring as well. Swimming, diving, fishing, hunting, cutting, and gathering of herbs are prohibited in the territory of the park.

As it turned out, the lakes are surrounded by numerous caves that we have never even heard about. A whole underground labyrinth—Labudovac Cave Park—is located near Upper Lakes. At one time it was available to tourists, but unfortunately not now. Along the Great Cascade, between the Gavanovac and Kaluderovac lakes, there is an entry to Supljara Cave with a viewing point on Lower Lakes. We simply did not have enough time to get there.

I am not an expert in flora and fauna, but I was really impressed when I heard that more than 1,400 rare species of plants grow in the park, 72 of them are endemic. As for fauna, almost all European animal species inhabit the park, including the biggest Croatian predator, the brown bear (Ursus arctos). Besides the bears, Plitvice Lakes Park is also inhabited by wolves, wild cats, deer, boars, foxes, and different birds. Fortunately, my inexperienced eye noticed just harmless ducks and fish.

Visit their web site for more information. It is available in five languages.
Plitvice Lakes National Park in Croatia is worth visiting, but not for only one day and not during July and August. 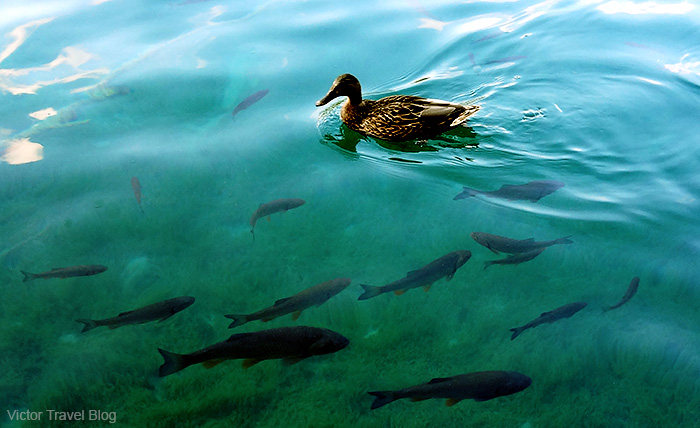 How to Visit Dubrovnik, Croatia, in Snow
Why You Will Love Summer Rovinj
Rovinj and Its Competitor Dubrovnik

« Vezelay, a designated UNESCO World Heritage Site, and famous for its Chardonnay and Pinot Noir
Monument to Count of Torralva—Castillo de Almodovar del Rio near Cordoba »
%d bloggers like this: