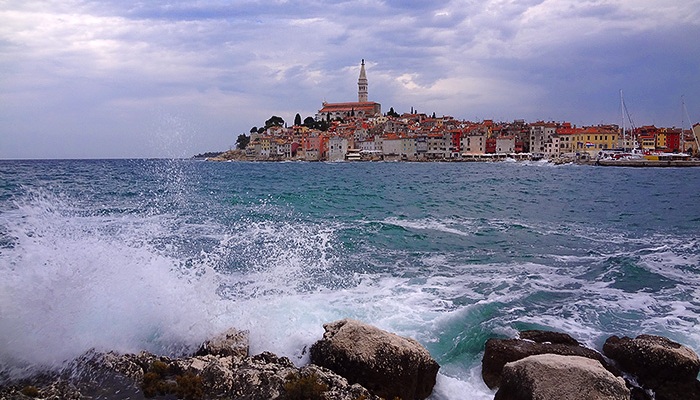 Without a doubt, it is great to live on a beautiful lonely island in the sea in a comfortable hotel where everything you need is ready for you. You don’t have anything to worry about. Breakfast, lunch, dinner, bar, beach, chaise lounge, shower, SPA, air conditioning system, sport—everything is at your disposal. But this whole infrastructure could be moved to any other place near the sea, and you wouldnt feel the difference. Whatever country, sea, or city it was, what language the locals spoke—it will not be stored in your memory.

But what if you tried to rent apartments and live there, if not as a native, at least as an explorer who arrived to take a little rest. Lets try? So, follow me, my devoted reader. Today, we have Rovinj, the ancient city on the Croatian Adriatic coast of Istria.

There are plenty of places to stay in medieval Rovinj. We took Villa Cissa (here you can find descriptions and photos of three of its apartments) with all the modern conveniences including an air conditioning system, which is mandatory in the summer in Rovinj. Everything you need for living is provided here just as in your own home. In fact, it is your little home for a couple of weeks. However, try to understand one thing: you live in the center of the medieval town, so don’t expect quietness. Don’t sit inside your apartment. It is better to go out and immerse yourself in the atmosphere of summer relaxation.

So, we took possession of our villa and went on reconnaissance. At first, everything was unknown, and we had some sense of discomfort:

– Where are we going to have breakfast, lunch, or dinner? Moreover, the cooking should be good there, not “for tourists.”

– Where are the laundromat, grocery, and mini markets?

– Where can we exchange money at a good rate? They still use Kuna in Croatia, but soon it will be replaced with Euro.

– Where can I find a quiet, cozy place to write this blog post?

We had plenty of questions which would never have surfaced in an all-inclusive island hotel, but still it was rather interesting. 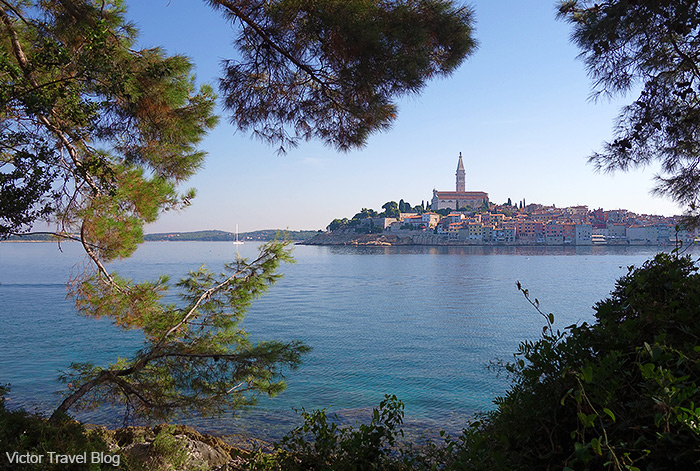 Then we found a bakery …

… whose aroma was so good that even if you had not known of its existence, you would not have passed it by. They have the freshest pastries: the Croatian layer cake with cheese, pizza (its a heretical thought, but it seems like their pizza is even tastier than Italys), poppy seed rolls, confiture, cheese, cottage cheese, and bread which is not simply tasty, but very tasty. In short, if youre overweight or diabetic, you should not enter this bakery.

Then we found a restaurant

To be more exact, the host of the villa gave us a visiting card of a restaurant and told us that their chef is Croatian and an expert in cooking meat and fish. You might know how it usually happens in Turkey, Greece, or Egypt: a guide or a porter in your hotel assures you that he knows the best restaurant where only the locals eat, and where the best dishes in the city are served. You go there and after the first attempt realize that he simply sent you to his relative who cannot cook at all.

Here in Rovinj, such a recommendation looked the same, thats why we did not go to the trattoria of Sidro (A. Rismondo, 14) immediately, but tried to eat in other restaurants which can be found at every step. When the results did not impress us, we went to Sidro and—voila!—the steak with truffle sauce was marvelous. We have not been deceived! Well, the sauce is no great wonder for us. We are more interested in the way they cook the meat, and we enjoyed a real pleasure.

The last time we ate such perfectly cooked meat was a year ago in  Croatia. Yes, again in Croatia, but in the city of Trogir, in the canoba Capo.

With this, our experiments came to an end. We left our attempts to find the meat-cooking master in Rovinj. What for, if we already have found one?

Then we found the old Rovinj

Probably, the old quarter of Rovinj wont impress you at first glance. Sure enough, its not a refined Trogir; there are ragged walls, shabby window shutters, and chipped paint here. Rovinj provides the greatest impression from the sea or from the neighboring islands (we spent several days in one of them, Sveta Katarina), but when you move yourself inside this UNESCO World Heritage site, you wonder at its neglected condition.

One possible explanation is Italians. About 20% of the population of Rovinj are Italians, although this percentage does not exceed five in other Croatian regions. Italians neglect of facades of their buildings is quite well known; its enough to take any old Italian city and compare, for example, with Belgian Bruges. However, maybe this is what gives some special charm to Italy and its former province, Istria. Would the total reconstruction of the buildings’ facades be a complete disaster for Rovinj? Quite possible.

Living in the old city, we gradually started to discover it by parts, tiny parts. Here, somebody decorated the staircase with seashells; there, somebody made a picturesque entry to the sea and a tourist attraction at the same time; and there, somebody put some pillows on the street steps for extra seating, and an original bar was set up.

From the sea, Rovinj tries to look like the famous Mont Saint-Michel in France—stately and mystical—but it is cozy, noisy, and very alive inside.

Then we found a cliff

People come to Rovinj not only for ancient streets and buildings, but also to swim and tan. Of course, you wont find the Maldives beaches with white sand here, only cliffs are at your disposal. People settle themselves in small plain spots (often artificial) to relax among the crowd.

However, you can find some more or less secluded places, for example, some plain and flat stone among impassable sharp stones. Probably, due to this inaccessibility, “our” stone always was free, and we went there to tan and swim every morning and evening. Moreover, all the blog posts about the vacation in Rovinj were written there.

Here you have the beautiful emerald water and wonderful sharp stones guarding this water, just as you have along the whole coast of Croatia. It is easy to get into the sea: just jump from a cliff, but to come out of the water you need to wear special footwear (which is being sold here at every corner, but simple sandals will also be enough) and have elementary rock-climbing skills.

This place is quiet and cozy. It provides a perfect view including the tiny island which persistently peeked in on half of my shots made in Rovinj. It is uninhabited, although it could become the Croatian Mont Saint-Michael if some monks decided to build a church on it. I was obsessed with the thought of buying it and building a medieval castle there: one more attraction for the tourists and a benefit for the city at the same time. The impression is that one of the most memorable images of Rovinj will be connected with this islet, because I will never be able to buy it and build a medieval castle on it.

I am sure you remember some moments of your life when you caught yourself thinking: God, I feel so good. In Rovinj, the number of such moments per unit of time was the highest in my life after Bruges. I call it the “density of happiness” index. However, Rovinj has great advantages over Bruges: the wonderful warm climate; tasty cuisine; and of course the sea; plus, a lot of beautiful people.

Come see for yourself 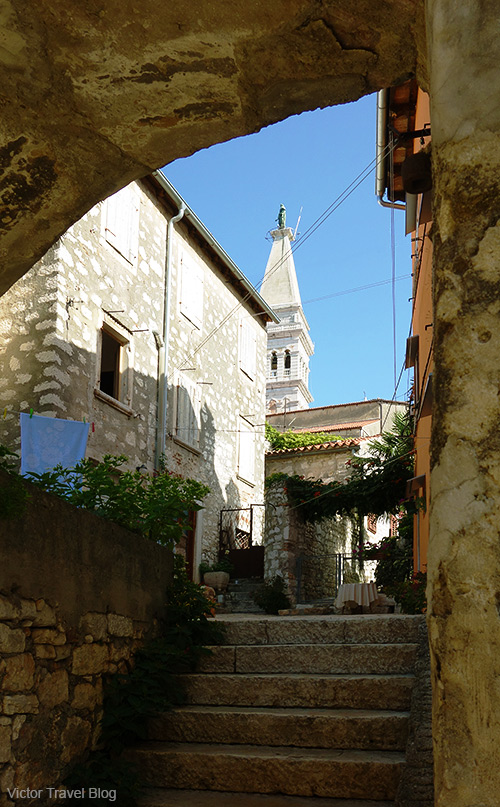 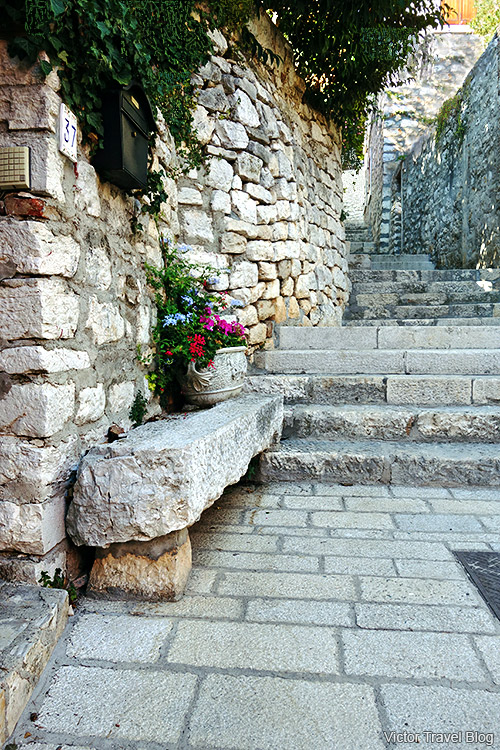 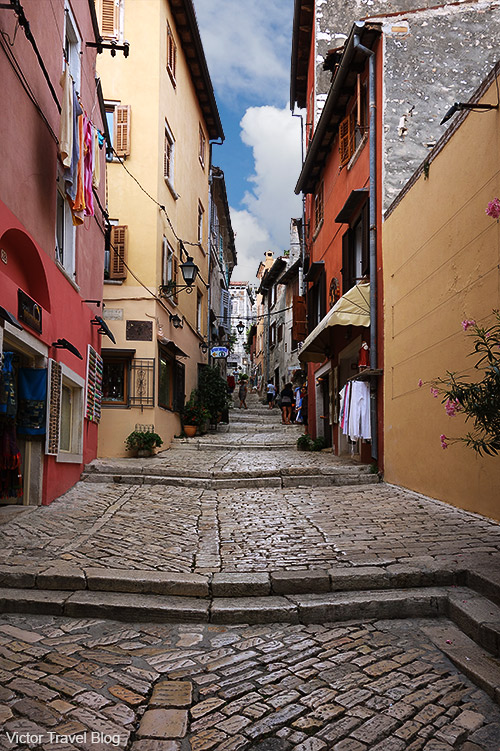 How to Visit Dubrovnik, Croatia, in Snow
Cozy Prison at Spanjola Fortress of Hvar
Facts in Common Between the White House and the Diocletian Palace

30 thoughts on “Why You Will Love Summer Rovinj”