What to See in Rome?! Are You Serious? 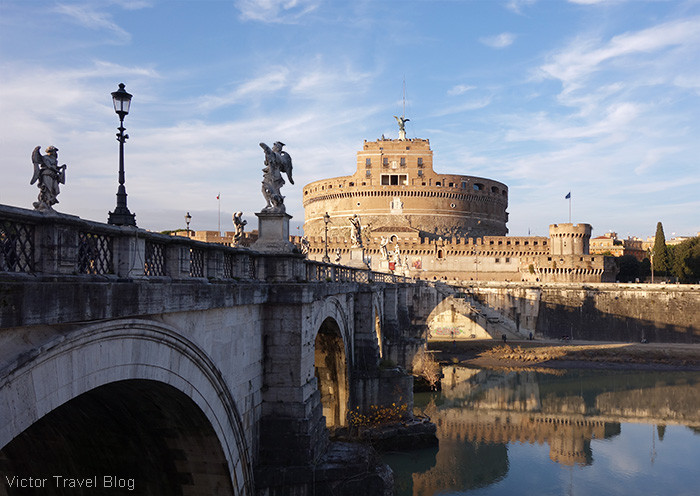 Until recently, I had a definite answer to the question: where would I like to live. “Of course, in Bruges, Belgium!” But now I would add, “Well, maybe somewhere near Rome, Italy.” Rome is a unique city, because it is hard to detect its center. Moreover, there are many different places of interest among which you will always be able to find one that meets your preferences.

The Mausoleum of Hadrian usually known as Castel Sant’Angelo? Or the State of Vatican City? But maybe the Pantheon, the Colosseum, the Roman Forum, or the Appian Way will be your favorite place in Rome when you visit this city for the first time. I havent even mentioned its numerous churches, fountains, squares, and palaces. 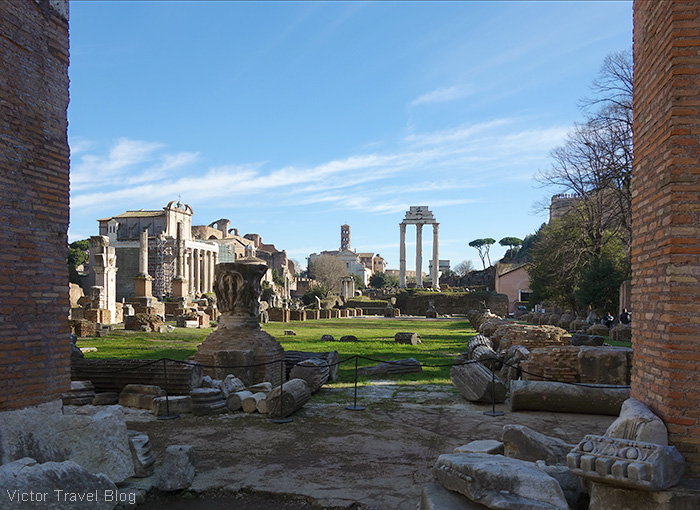 Ponte Sant’Angelo, or the Aelian Bridge, or Pons Aelius, or the Bridge of Hadrian.

My acquaintance with Rome is long-standing. It started with the movie Roman Holiday with Audrey Hepburn and Gregory Peck, but probably your meeting with the Eternal City started with the film of Gladiator. It does not matter. Everyone has his/her own Rome. The main thing is to turn this virtual acquaintance into a real one. Believe me, you wont regret it!

Rome is the only metropolis that made me want to visit it again and again despite my aversion to big cities. What is the secret of the unique attraction of the Italian capital? Yes, the climate is nice here. It seems like the sun shines every single day. The fragrances of the Italian cuisine are richly warmed by sunlight. People are smiling, although they keep themselves at a distance from foreigners. It is not hard to understand: they have their own caste, they are Italians by birth. 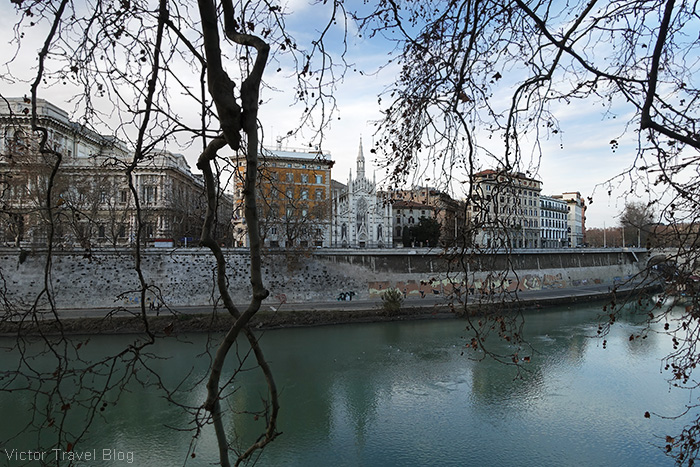 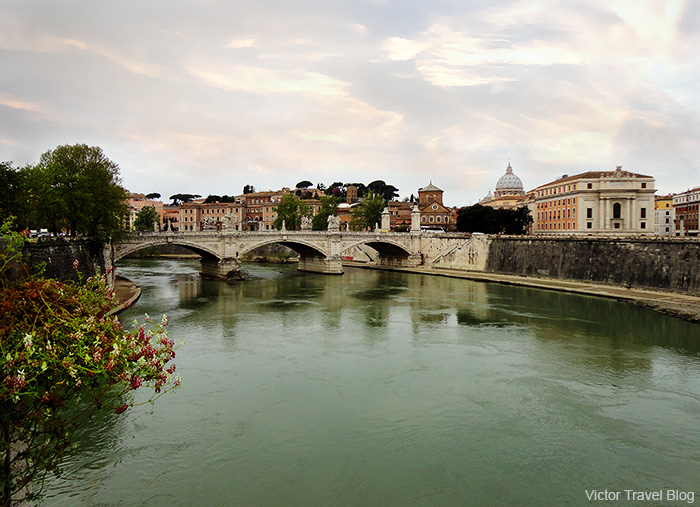 Is there something special in the local air? In Rome, you totally forget about your age. Heady and exhilarating, the city is so open hearted and friendly that you feel you belong there. But sometimes, Rome is also full of passion! 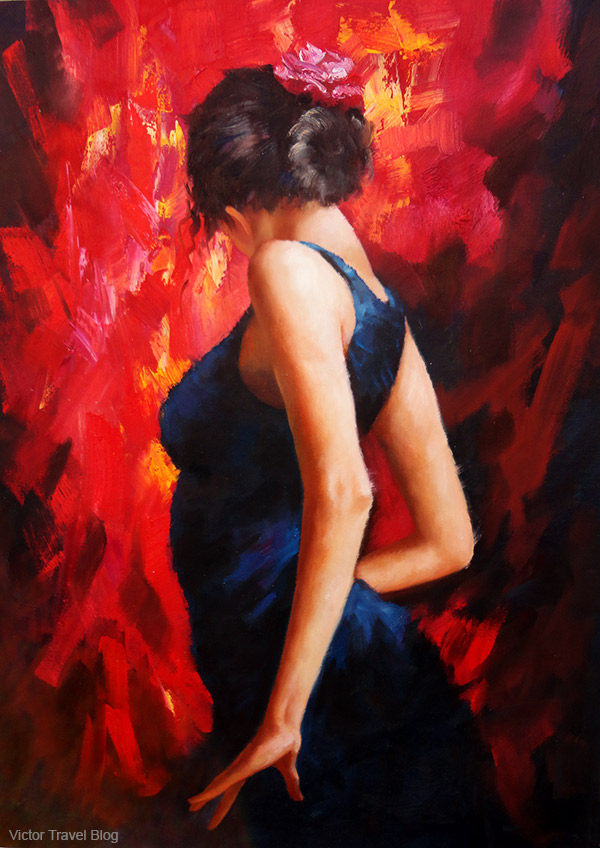 A picture by street artist

The Capitoline Hill is the most sacred of Rome’s seven hills and the smallest one, but it is a heart of Rome. From ancient times, it was the place for temples, today—for a museum, the Capitoline Museum. Of course, if you have not been in the Villa Borghese, your opinion about Rome’s museums cannot be fully informed, but the sculptural exposition of the Capitoline Museum is magnificent. Capitoline Venus, The Dying Gaul, and the large fountain of the River god, Marforio, in the inner garden of the museum are as good as masterpieces of the Vatican Museums.

Never ask what to see in Rome.
The best thing to do in Rome is to walk (and to eat, of course).
Whatever you see is perfect!

But if you miss something—well, you cannot embrace the boundless—leave it for the next visit. 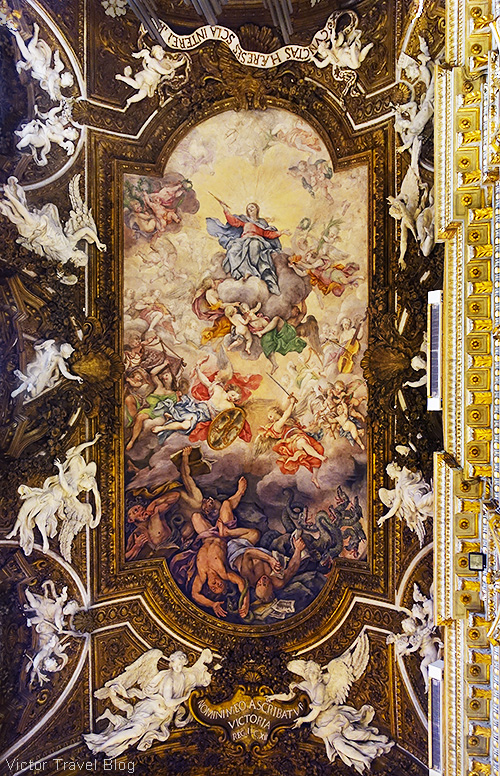 If I had the opportunity to visit Rome again for the first time, I would have started with a night walk along the city. Rome is even more fabulous at night. It is tastefully highlighted. St. Peter’s Basilica seems to be almost weightless as it rises into the night sky. Our windows in Hotel Nazionale provided a direct view of the Vatican. Several windows of its upper floors always had light. The four on the right are the windows of the Papal cabinet. I am unfamiliar with the sense of euphoria after a meeting with the Pope, but many people come to Rome solely for this experience!

Choose a Sunday in the calendar, preferably one that is on the eve of religious celebrations, and walk near Saint Peter’s Square. Perhaps, fortune will allow you to be a witness of the next action: The whole square is full of Ferrari red, yellow, or white, and plenty of presentably dressed people are screaming, greeting the Pope, who says something to them and waves his hand bestowing a blessing on them. 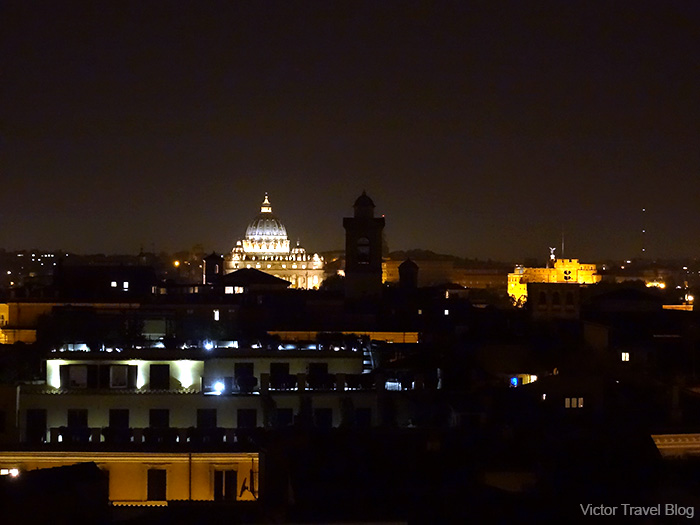 Fountain on the Piazza Navona 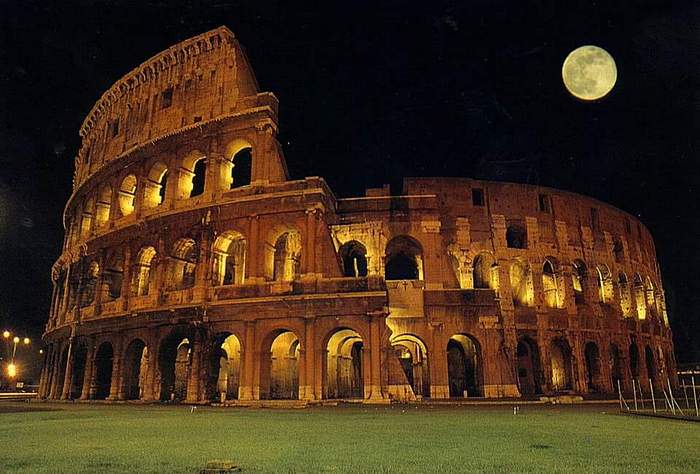 The Colosseum is the most famous sight of Rome. At night, it is illuminated by different colors; one more attraction of the compulsory excursion program in the Eternal City. After that, your guide will bring you to a huge palace resembling a white mountain. This building at Piazza Venezia can be seen from every part of the city.

This is the Altare della Patria, a monument to Vittorio Emanuele II, the first king of unified Italy. Several old Roman ruins and medieval churches were destroyed to make room for the monument. The Romans had mixed feelings about it and gave different nicknames to this leviathan: a typewriter, a set of dentures, or an ink pot. I dont know what the deleted district once looked like, but for me, Piazza Venezia is one of the purest diamonds that sparkles in the crown of Rome among other jewels. 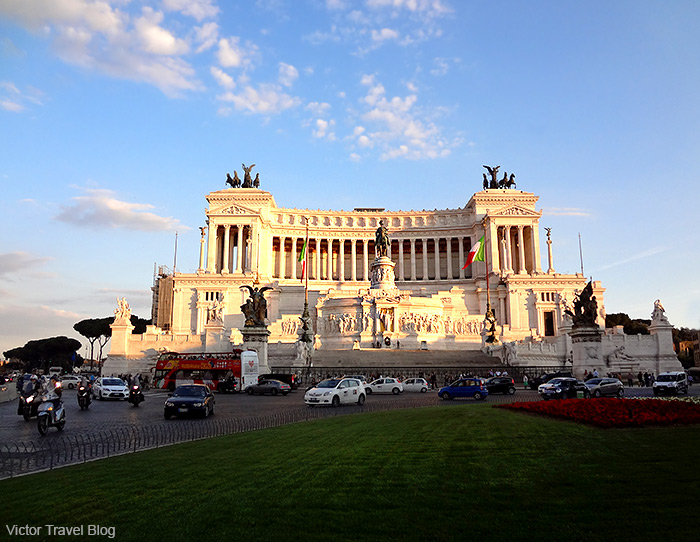 At last, you will see probably the most magnificent symbol of Rome, Trevi Fountain. The pure white fountain begins as a wall of a palace and then pours out to the square to occupy almost 80 percent of it. Many beautiful marble figures surround the main one, Neptune, who enters the square in a shell driven by a seahorse. In the light of projectors, blue water shines gold or emerald-green.

The energy of this place is colossal. You don’t want to leave. Several hundred people around you feel the same, including pickpockets who adore this square.

There is an old tradition—if you want to return to Rome, stand with your back to the fountain and throw a coin into it over your left shoulder. Numerous tourists are so assiduous in dropping coins in the hope of coming back that you can barely see the fountain bottom. Do you know how much money is taken out of Trevi Fountain every day? Up to 3,000 Euro.

You cant imagine the locals without mobile phones! If an Italian does not have company, he immediately pulls out his phone. In Rome, they talk endlessly and with incredible speed. This is true even of the carabineers at a cordon around the building of the Italian Parliament on the Piazza di Monte Citorio. I saw it myself in April when protesters demanded to form the new government of the country.

Even hurrying to somewhere, nuns always keep mobile phones in their hands, driving Smart Cars or Fiat Puntos. But automobiles dont always transport their owners, sometimes it is vice versa. Often, we watched as a tiny car was traveling somewhere with help of its big brother. I wonder where to?

I would gladly take a ride on it.

I don’t know what the term “Eternal City” (as the Italian capital is often called) means, but let it live forever with all its tourist attractions, each of which should be described separately.

I love you, Rome. God bless you.

A map of the Roman Forum. Click to enlarge the map.

To Civita di Bagnoregio, Italy, accompanied by Orvieto Classico
Decorated Ceilings of Vatican Museums or Interview with God
Venice Carnival 2014: Our First Carnival Outfits
My God, How I Love Italy!