Today I’m going to tell you about an extraordinary place to spend a night or two. It will cost you a pretty penny, but just think back how much you spent for a couple of rounds in a gondola along the Grand Canal in Venice, Italy, when your lady said it was her dream. A couple of nights in a real medieval castle will not bankrupt you. If you want to impress your beauty–go ahead! Imagine the surprise you could give to your beloved! In my case, I knew that Mi Querdita is obsessed with canopy beds. Her dream came true.

Although Spain is visited by millions of tourists annually, few know about the chain of historic hotels called paradors. For me, it was a hard choice. There were two big paradors in Catalonia suitable for our route: Parador De Cardona and Parador De Tortosa, although a website Parador.es proposed hundreds of historic hotels in Spain.

The castle and town of Cardona are located in the centre of Catalonia, 85 km from the city of Barcelona. You have an opportunity to feel like a Catalan aristocrat and to live in a rich medieval dwelling. At the same time, the castle is a great fortification constructed to serve the Dukes of Cardona perfectly for many centuries. The Castle of Cardona stands on a conical mountain 585 meters high, and it can be reached through a narrow serpentine road with quite sharp curves.

This is the castle of the 9th-10th centuries, an unassailable fortress. It has never been conquered by enemies in its entire history. It became a hotel in the middle of the last century. A hotel in the Castle of Cardona was officially opened in February 1976, and nowadays, Parador Duques De Cardona Hotel is one of the ten best castle-hotels of Europe according to tripadvisor.com.

Who knows, maybe one day, you will park your car under these inaccessible walls. Beyond that—and its quite far away—you can walk only by foot. Your parking place is at the bastions of the 17th century, and youre going to live at the Lord’s Palace of the 11th-15th century. The wheels of our modern suitcases rattled along the historic stones, and we entered the reception hall. We think we will like it here. No, we would definitely like to live here. After a long trip around Spain, I had good reason to be scrupulous in choosing a place to stay for our last two days in this country.

It is already a tested scheme for us: we arrive, rent a car, explore a country, and try to spend the last couple of days at some magnificent place where we can rest our souls and exhausted feet. And this place must be located not far from an airport.

The service in the castle was of the highest level. We were rapidly checked in, our desires announced during the reservation were considered, and we received a long-awaited room on the top floor. I was very impressed with the birds eye panorama of the surrounding valleys. We stayed in a usual “standard,” but personalized luxury rooms in Parador de Cardona would be satisfactory even for kings. I am not sure every single room is equipped with a canopy bed, but our room, number 706, had it.

Staying in a romantic castle with the powerful bastions rising on an enormous hill is something unusual. It was not just beautiful here, it was even splendid for a four-star hotel. Imagine how you would spend the evening with a glass of twenty-year old brandy Lepanto or Gran Duque d’Alba sitting in chairs which look more like thrones.

Parador’s dining room is worth a special mention. Dukes of Cardona were never ashamed to have guests. The breakfast was so rich that we felt like we were not be able to move afterwards. What about the main menu? Prices are high, but the Spanish cuisine still cannot compare with my favorite Italian.

We failed to spend two days lying under a canopy, because the view from the window called for an active stay.

Lets start from the Church of St. Vincent which is located inside the castle. This harmonic church is mentioned in many prestigious catalogues dedicated to art of the Early Middle Ages, as a masterpiece of medieval and early Catalan Romanesque architecture. Its hard for me to discuss such nuances of architecture, but I know it was calm and peaceful inside the St. Vincent Church. A couple of times we witnessed the arrival of tourist busses. A quick excursion and people disappeared. The church is open for the guests of the parador hotel upon their desire. We were there alone fully enjoying its atmosphere.

You can easily notice the tombstones of several generations of Dukes of Cardona, but there is another interesting thing hidden inside. Huge and high, the Church of St. Vincent has a tiny crypt or chapel of relics of the early Christian period. Climb down to the miraculous crypt using a narrow staircase near the altar. 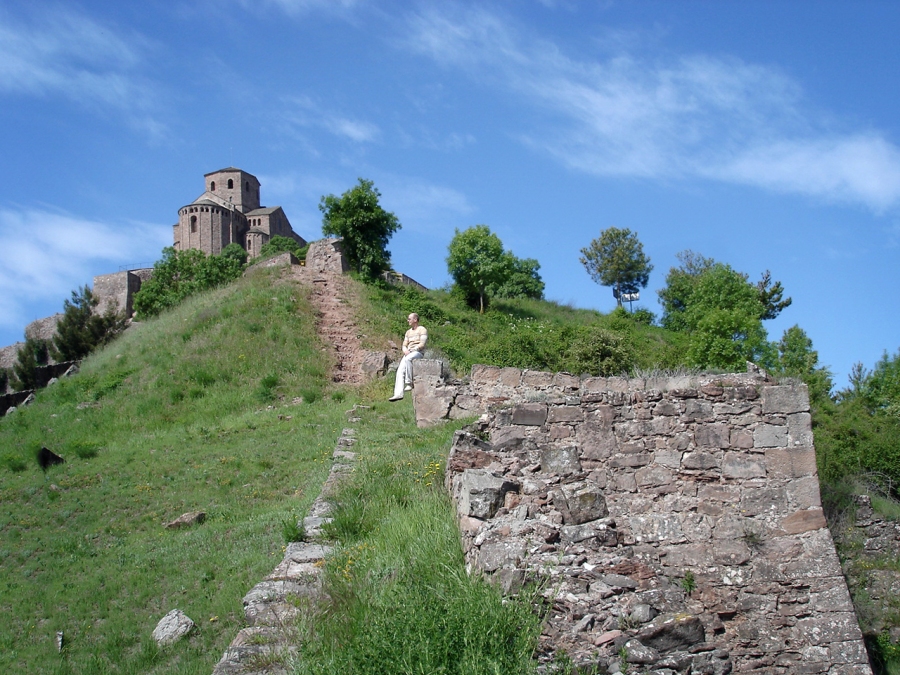 The Church of St. Vincent in the Parador de Cardona.

The castle walls give a great view of the surrounding valleys. You will notice the only European Salt Mountain and semicircular arches of the old bridge. This bridge was within walking distance from us, but it was impossible to climb on it because its ruins are in the middle of the shallow river. So close, but unreachable!

Later, we found out that the bridge was rather unfinished than ruined and had a very vivid name, the Devil’s Bridge. Its construction started in the long ago 15th century. As the legend says the local officials had a deal with Satan in order to speed up the work, but the devil found out that the bridge was designed for pilgrims on their way to holy places: the mountain of Montserrat near Cardona, the Cathedral of Our Lady of the Pillar in the city of Zaragoza, and the relics of St. James in the Cathedral of Santiago de Compostela. Furious, Satan not only stopped the work, but also hexed the bridge which remained unfinished until modern days. 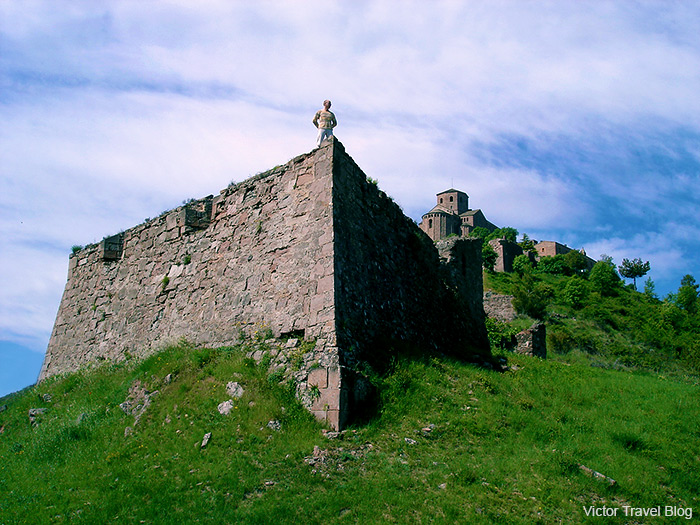 Satisfied with our photo hunting, and starving to death, we went to the city to eat something. Cardona is a provincial town. Even in cafes, they do not speak English, but you can always use gestures and smile. It is completely another world with its own rhythm of life. After a snack, we returned to our castle. It took a long time, because we had to climb the mountain. 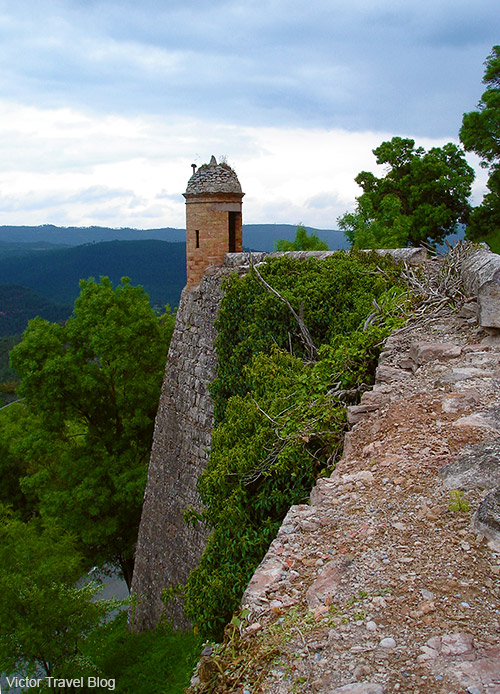 Cardona is an impregnable fortress with mighty bastions. It happened that instead of lying under the canopy like all normal people do after an enormous breakfast, or resting on the sunny terrace overlooking the valley and drinking coffee, cava, or wine, we climbed back and forth on our mountain for two days exploring the preserved and ruined fortification constructions of the castle-hotel.

Nobody envies those people who tried to storm the Castell de Cardona. You climb higher and higher under the burning Spanish sun, attack the walls at an inconceivable angle while arrows and cannonballs fall on you from every single bend. It seems absolutely impossible to overcome two lines of these walls, but if you were lucky enough to conquer the first gates, you could consider yourself in hell, because all the gates of the first perimeter are exposed to shooting from the second chain of the walls.

The last siege of the Castle of Cardona happened during the French War 1808-1814. On October 21, 1810, 5000 soldiers and plenty of cavalry of the French General, MacDonald, surrounded the castle. The battle began at 8 a.m. and continued till sunset. Over 400 French soldiers died. Defenders lost only 12.. The assailants gave up further attempts to take the stronghold. 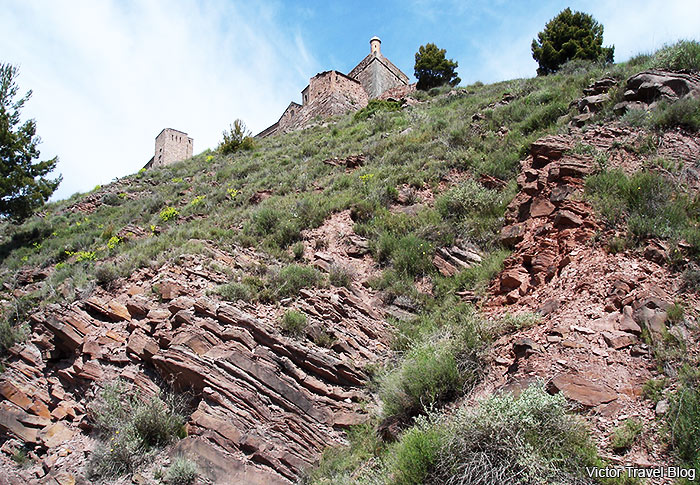 The first mention of this castle goes back to the 8th century, when Cardona received city status, and the castle became the home for the local rulers and aristocrats who soon received the title “Viscounts of Cardona.” The 15th century brought the highest prosperity to this family, and viscounts became dukes. Since that time, they were called the Duques De Cardona, kings without a crown. Thanks to dynastic marriages, the family of the dukes became relatives of the Royal houses of Aragon, Portugal, Sicily, and Naples. The owners of Cardona had a special gift for actively participating in the palace intrigues. For almost 700 years, they intrigued, staying in the shadows. In Catalonia, people say, «He/she is even more cunning than Cardona.»

These two days in Cardona were like a fragment from our childhood fantasies about castles and knights. By the way, the naturalness of the castle attracted movie makers as well. The famous Hollywood film director, Orson Welles, used this place for several scenes in the movie Campanadas a Medianoche (Chimes at Midnight) adapted from the plays Richard II, Henry IV, Henry V, and The Merry Wives of Windsor by William Shakespeare, and Chronicles of England by Raphael Holinshed. One could say it is a perfect setting for medieval action.

Well, two days with the intention of resting under the canopy turned into a maximally active archaeological expedition. If you are also fond of historical places, save at least two days for Parador de Cardona, and if you want to visit the Salt Mountain—three days.

The Salina of Cardona is located only 3 km from the city. The height of this mountain is more than 160 meters. It is considered a geological phenomenon: it is about 40 million years old. The mountain was a source of the citys prosperity for a long time, therefore the elders of Cardona were also called the Salt Lords. Development of the deposit was stopped in 1990. The mountain is pierced with underground caves and galleries where saline crystals rearrange into amazing transparent-white or soft-yellow stalactites and stalagmites. Today it is the extraordinary tourist attraction, the Salt Mountain Cultural Park.

What else is worth visiting? There is the mountain group Montserrat only forty kilometres away from the Cardona parador hotel, halfway between Barcelona and Cardona. It is a religious centre of Catalonia with the ancient Benedictine monastery among the weird mountain peaks where the most famous Catalan relic, the miraculous Black Madonna of Montserrat (the 19th century) is stored.

26 thoughts on “Parador Duques de Cardona Hotel: You Are in Medieval Spain Today”