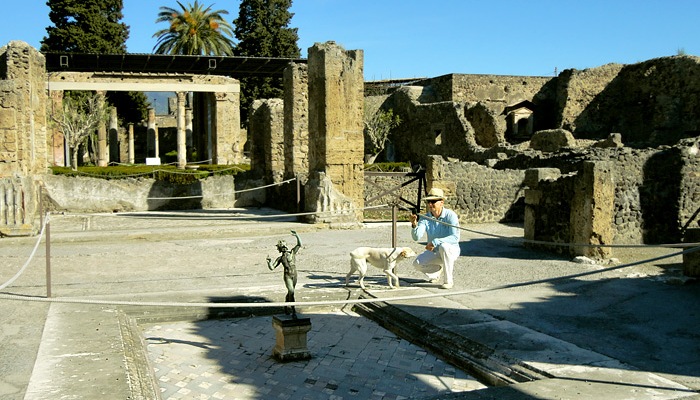 The archaeological museum in Pompeii is a strange place. For 11 Euro you get into the far Roman times, almost for 2000 years ago. When exploding, Vesuvius flunked with ashes all neighbourhoods in a matter of hours, has killed hundreds of people and “canned” the city. In 1748 archaeologists have started to “open up” it gradually.

Ancient streets, fountains and pools, cafes and bakeries, yards and gardens; you may enter the houses and homesteads, to imagine people living in here, their habits, the way they used to eat or sleep. But the greatest interest of the tourists is usually aroused by the wall paintings and frescos, some of which are still perfectly kept. And here the strange things happen: you will definitely find a locked iron fence if there is something interesting in a house. It’s impossible to get into almost every single house, indicated as sightseeing at the map of Pompeii, as they are all closed.

Quite an expensive entrance ticket will allow you to look at the bare walls, and by no means always; the traditional fences with locks are established even in the houses with nothing inside at all.

With the help of the ancient frescos scientists have tried to recreate the gardens of the inner yards of Pompeii’s residents, but sure enough, you will not be let in as well. 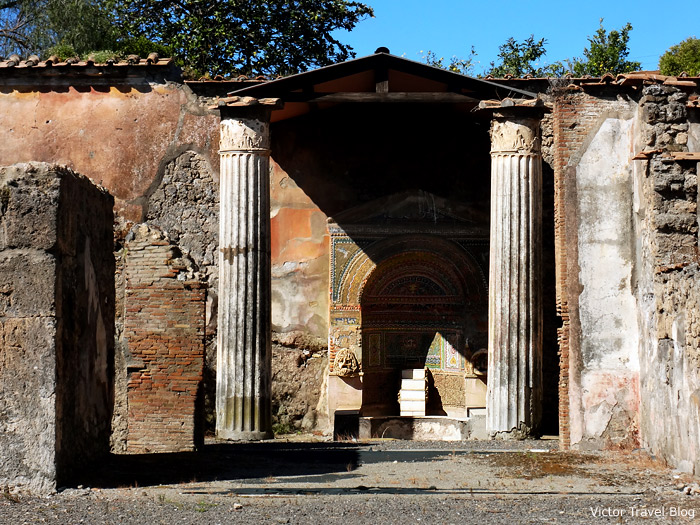 By the way, you may find a wonderful thing in the House of the Faun: the floor mosaic of the battle between Alexander the Great and the Persian King Darius. It is the most vivid mosaic I have ever seen in my life. Just look at the facial expression of people and animals! The mosaic was recreated, but still it is amazing. 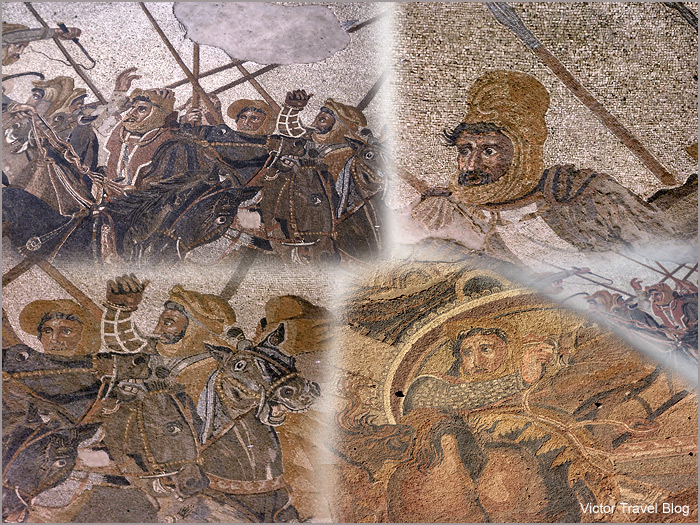 We had an exact list of the objects in Pompeii, bound to be visited; these were the houses and villas with the remained wall graffiti, frescoes. You should take an excursion for the exact time, when buying a ticket to some of them in order to get inside. So we asked, but it was closed. Well, okay, if this one is closed, we will get into some other. No way in hell! They were closed ALL.

When I was going to take the photos of Neuschwanstein castle, I visited its official website and found among other information that the western front is being restored, and because of that it will be covered by scaffold till some definite date. But these were the Germans! The Italians decided not to inform you that the paid-for excursion to Pompeii could barely provide an overview of a few frescoes! All houses with the famous frescoes were closed for restoring works SIMULTANEOUSLY! Can you imagine that all facades of the Neuschwanstein Castle castle could be covered by scaffold for several months contemporaneously?!

A workman was passing us by. I asked him how we could get into that house: The House of the Vettii. He answered that it was closed and could not be opened.

The workman smiled and crossed his wrists, demonstrating that he could be handcuffed for that.

Well, I used up all possible methods of legal influence; it didn’t work. So, in order to get pictures of the frescoes we were looking for, I had to climb over the fences several times. 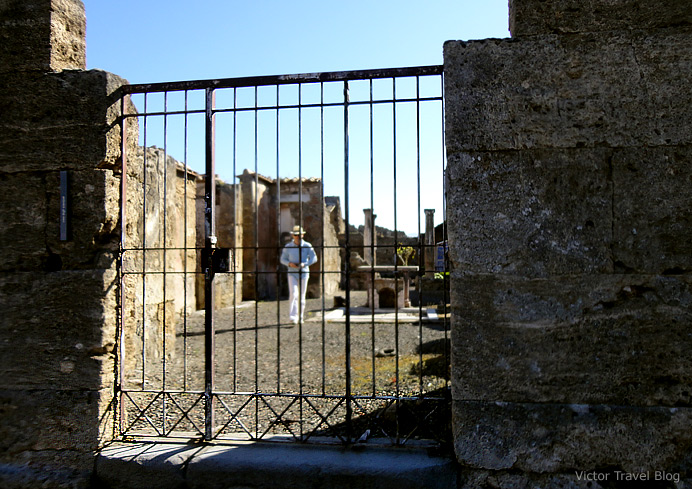 Having finished shooting the paintings at the following objects, I notice a huge video camera in the corner. The violation of law was recorded; seems like the securities come here in a minute to pin my arms to the sides, take the memory card off the camera and destroy the illegally taken photos, and after that I will be fined or imprisoned.

Gentlemen, after all, you are in Italy. 🙂 The siesta respected here even more strictly than any laws. From 14.00 till 17.00 everything is closed; nobody works; everybody eat, talk and sleep. It was 15.00.

The only hope was that the security had the same attitude towards siesta. It was confirmed – there were no alarm sounds, tramp of the running security’s boots, handcuffs or penalties; there was nothing more than the siesta. Oh, and the “souvenir” photos as well. 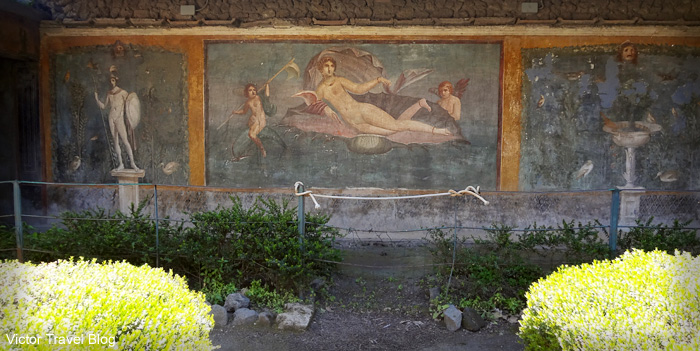 But there is another version: the Italian security is so kind, that when they saw quite a serious adult man in white trousers climbing over the fence to take some pictures of the frescos, they came into decision that those pictures were much-needed for him. So, why not let him take some photos?

Here is a tip for the adventurers: there is a house with frescoes not identified in the list of the sightseeing, provided by the Pompeii guidebook. Via Della Regina, building 24. 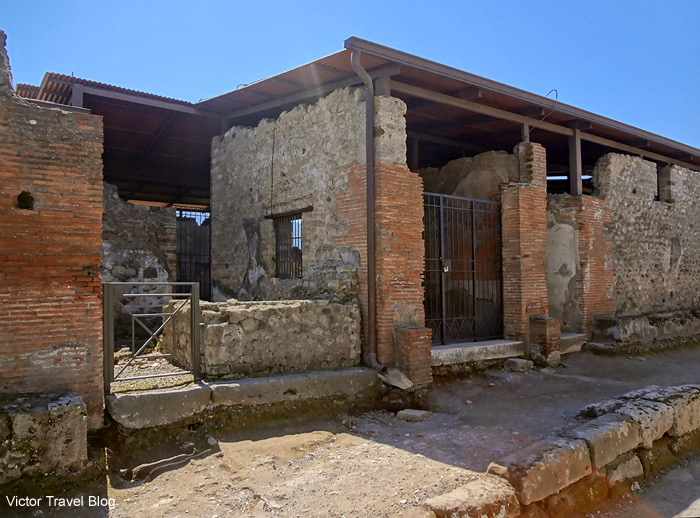 Of course everything is fenced and locked, but the fence of the neighboring 23rd house is rather low and easy for being forced. The award will be as follows…

The entries to the houses are not always fenced and locked. Sometimes there is a light wooden fence with a picture of a workman, wearing a helmet, who is gesturing not to come here. Do not come in! There was nothing interesting behind of any such fences. 🙂 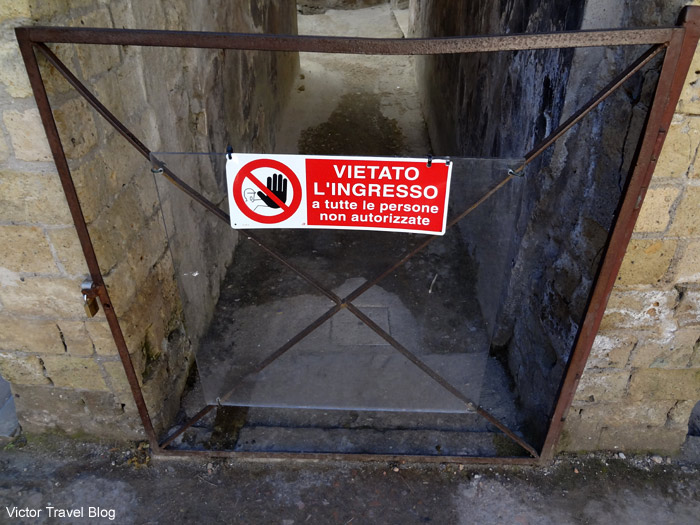 When you enter the Archaeological Site of Pompeii you can buy either a ticket just to Pompeii for 11 Euro, or a ticket to all three cities, rained down by Vesuvius ashes – Herculaneum, Stabia and Pompeii, – for 20 Euro. It is valid for 3 days.

By the way, you will not die of hunger among the ruins of Pompeii; there is a fairly large restaurant not far from the Forum where you’ll find pizza, pasta etc., and various beverages.

Wishing you a nice trip to the past!

What to See in Rome?! Are You Serious?
First Summer in Italy
My God, How I Love Italy!

22 thoughts on “Our Illegal Hunting for Frescos in Pompeii”