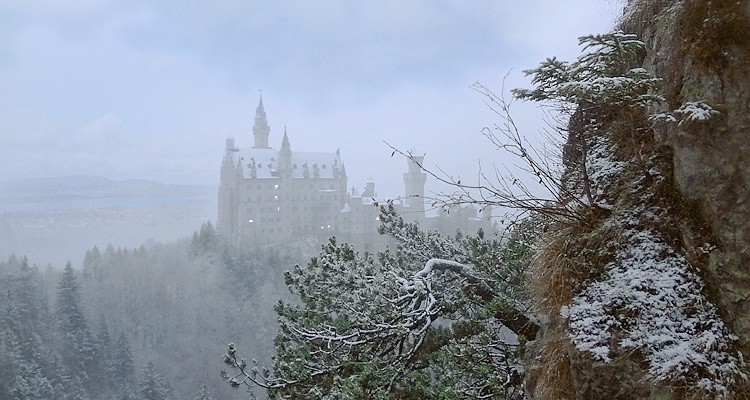 You may have seen this photo of the Bavarian castle Neuschwanstein a million times. The view of the castle from the Marienbrücke−Queen Mary’s Bridge over an 80-meter gorge with a waterfall−is captured in thousands of photos, posters, puzzles, mugs, mouse pads, and so on.

Sure enough, I wanted to take some original shots, to find an unusual, undiscovered angle. For this I came to Bavaria.

We always see the results of a photographer’s work, but sometimes the history behind the taking of a photo is even more interesting than the photo itself.

The first day, I spent shooting Neuschwanstein castle from all sides, inside, and from all viewpoints, but since it is surrounded by treed cliffs on three sides, there were only three points. So, if you are not provided with a helicopter or climbing equipment (and are not able to climb the cliffs), you will fail to find some unusual shooting angles for Neuschwanstein. Your only choice is to experiment with light.

Having observed the castle from all sides and determined the cardinal direction, I thought that in the morning, the rays of the rising sun will appear on this rock and gently light the sleepy castle still illuminated by the night spotlights from outside. The mix of the different streams of light will provide the extraordinary exposure, and give me an original picture as a result. I should come here at nighttime, climb up the Marienbrücke, wait for the dawn, and the super shot will be in my pocket!

As the saying goes, if you want to make God laugh, tell him about your plans. 🙂

At night, I parked my car at the foot of Neuschwanstein, got out, looked at the starry sky, and relaxed with a complacent smile−everything was going according to the plan. The stars were shining, so the sky would be clear, and there would be the dawning sun. I even left my umbrella, usually used for covering the camera when it is raining or snowing, in the car, and started to climb the mountain. Cheerful Hohenschwangau castle−so well-lit, yellow, and cozy− gave me a wink as if to say, “Well, well, you’d better photograph me. I’m not worse, and there’s enough light here.”

It is four o’clock in the morning. Neuschwanstein is not highlighted; neither is the forest. Nothing is highlighted at all! My flashlight is the only illumination. When I was walking up through the forest, the comforting idea that wolves have not been seen here for quite a long time crossed my mind several times. However, everything around me looked completely different. It felt like the forest had all the inhabitants which it must have.

Here is the castle. The tower illuminated by the tractor headlights. Two workers paid no attention to me. No wonder! It is rainy, late autumn, five o’clock in the morning, and an idiot dressed like an alien (there were so many clothes on me, and thank God for that, as it turned out a bit later), and equipped with a tripod is climbing the mountain with a flashlight in his hand. The usual routine. 🙂

Having reached the Marienbrücke, I found there were no competitors, but instead there were chilling cold wind and the almost completely dark Neuschwanstein (only a couple of shining windows). The first disappointment: there will be no night photos of the castle. I stepped back a bit, right behind the cliff where there was a small bench, and refreshed myself with a sensibly pre-planned snack of red wine and protein bars (Weider Global Nutrition, you can order me a link. 🙂 Your chocolate bars have done their duty), and began to wait for the dawn.

The stars slowly disappeared, and the drizzling rain began (the umbrella stayed in the car). Thank God, my ski jacket had a hood. The two pants, Dockers boots, two sweaters, and even knitted gloves (I was really well prepared) helped me in struggling against the wind, but an hour later, I started to freeze up. Then the additional troops−a 30-milliliter bottle of cognac from Duty Free−were thrown into the battle.

When it grew light, I fixed the tripod, and found that it was not high enough. The second surprise: the camera lens was just at the level of the handrails of the bridge. Okay, I would have to place the camera on the handrails, not to blur the pictures. Suddenly, heavy mist moved in and thick snow started.

Meanwhile, the sky was growing lighter, and Neuschwanstein was waking up deep in the mist. Well, it was time to get to work. Have I already mentioned I left my umbrella in the car? The wind did not let the snowflakes fall peacefully. They were flying at an angle and of course directly into the camera lens. So I had to run back and forth along the bridge, and shoot covering the lens with a glove. It did not help!

Almost at once, my Sony suffered a severe wound−a huge snowflake right to the lens−and was hospitalized (into the bag). The spare Nikon rushed into the fight. Of course, it is weaker under unfavorable shooting conditions, but what else could I do? The main player needed re-animation.

It was getting lighter and snowy as well. Neuschwanstein gradually showed through the mist, but with no rush. I took some more pictures for an hour and realized that there would be no dawn. That “milk” was all nature decided to provide me with that day. I guess God laughed enough.

In spite of the losses in technique, I still managed to take some unusual shots. But were they successful−that is another question.

On the way back, the castle turned and said over his shoulder,
“I’m sorry. I have no power over nature. Will you come back?”
“Of course.”

And there was no one around, just me and the world’s most beautiful castle, Neuschwanstein.

More about castles:
Peyrepertuse – One of Cathar Castles
Monument to Count of Torralva – Castillo de Almodovar del Rio near Cordoba

44 thoughts on “The History of One Picture: Neuschwanstein Castle”