A Day in the Gray City of Mozart, Salzburg

﻿﻿
Having enjoyed all the advantages of the Bad Hofgastein ski resort, we decided to enrich our trip to Austria with a portion of history. The nearest and the most desired candidate for visiting was Salzburg—the city that gave Mozart to our world.

In Austria, roads are perfect even in winter. On the way to the most musical city of Austria, we noticed a massive castle on the mountaintop. Hmm, looks like today’s plan received a new item—we ought to visit this castle on our way back! 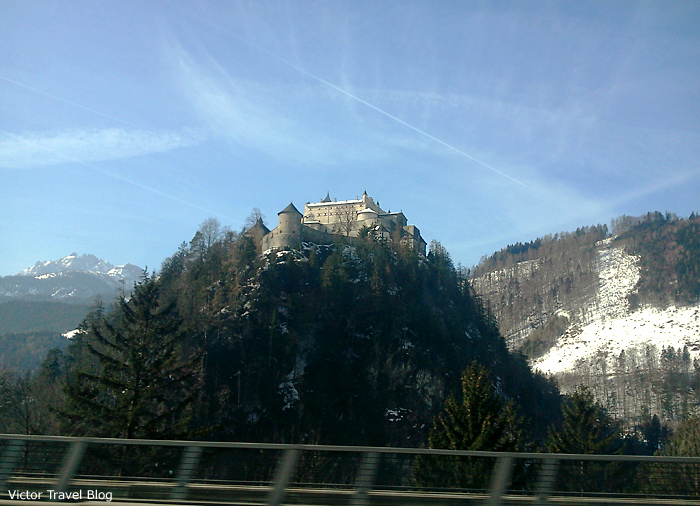 One hour later, our tiny, but nimble Punta entered the famous city located at the northern foot of the Alps. Salzburg welcomed us with a leaden sky and nasty sleet. We must admit that after the sparkling snow and homeliness of Bad Hofgastein, Salzburg seemed unfriendly and cold. 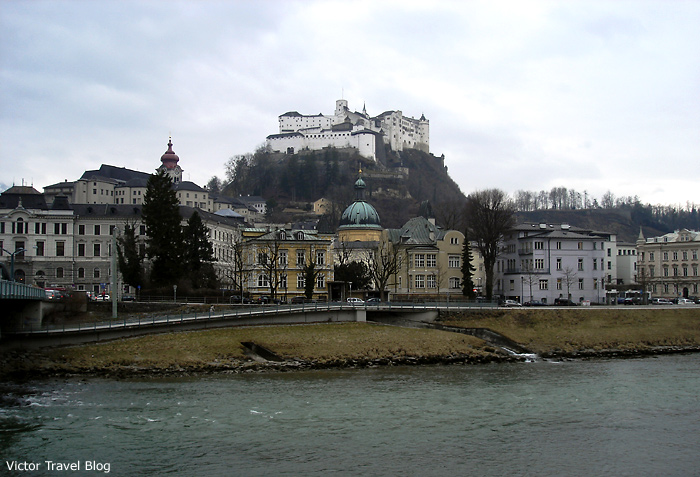 A guidebook says that this is one of the most beautiful cities of Europe; the city with ideal design; invited Italian architects created a miracle in the foothills of the Austrian Alps. Now that we have seen Salzburg, I want to disagree with the guidebook: It seems like those Italians built better in their homeland. Whichever city you visit in Italy, you admire it and want to stay there forever. Salzburg is different. Ideally clean, ideally gray, severe, and ascetic as a monastic cell. I pondered for a long time whether to write about Salzburg at all. But we cannot blame the city which was ruled by bishops too long, till the very 19th century. In my opinion, this fact left some kind of an imprint on the appearance of the city and its lifestyle, and that gray February day has significantly deepened such an impression. 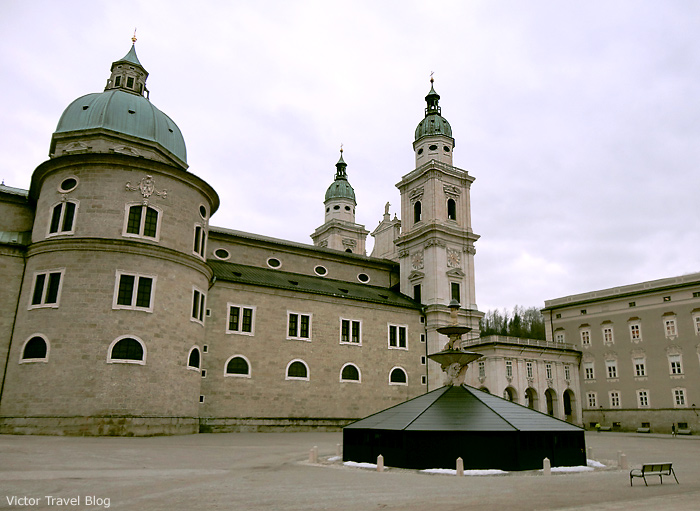 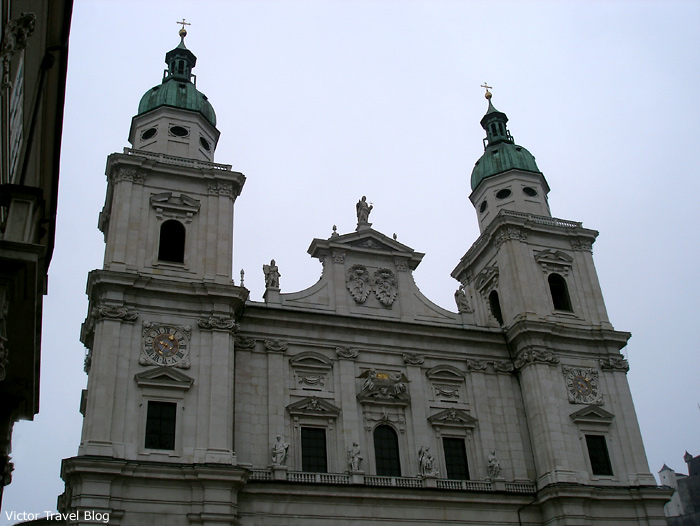 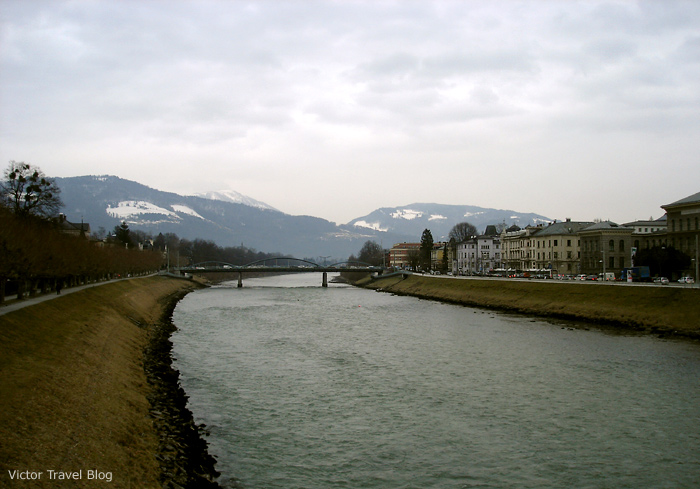 Salzburg’s “Old Town” is included in the UNESCO World Heritage List. Hmm, what a strange decision. The city is located on both banks of the Salzach River decorated with several beautiful bridges. On the left bank, there is the old town with its main attractions.

The right bank started to develop in the 17th century, and it seems to me more bourgeois and alive. The main sightseeing on this bank is the series of palaces and gardens with a beautiful name, Mirabell Palace or Schloss Mirabell. This place provides the best view of the fortress rising above the old Salzburg. Churches, abbeys, and castles predominate in the overall picture of Salzburg.

The historic part of the city is nothing more than a narrow strip of ground between the river of Salzach and rocky mountains: Mönchsberg (the Mountain of Monks) and Festungsberg (Fortress Mountain). The city seems to be dug into the rocks. Wherever you are, one side of the street ends at the river, another abuts the rock. I dont suffer claustrophobia, but such a space constraint presses on you a little bit.

The city was named after the salt which was the main source of income for centuries. Salzburg was founded by Saint Rupert. Though this saint received a special holiday in his honor, he cannot compare in fame with another citizen of Salzburg. Salzburg is the birth-place of Mozart. This city gave several dozen luckless years to Mozart, but the generous composer in his turn brought worldwide fame to Salzburg. That is a pretty one-sided exchange. 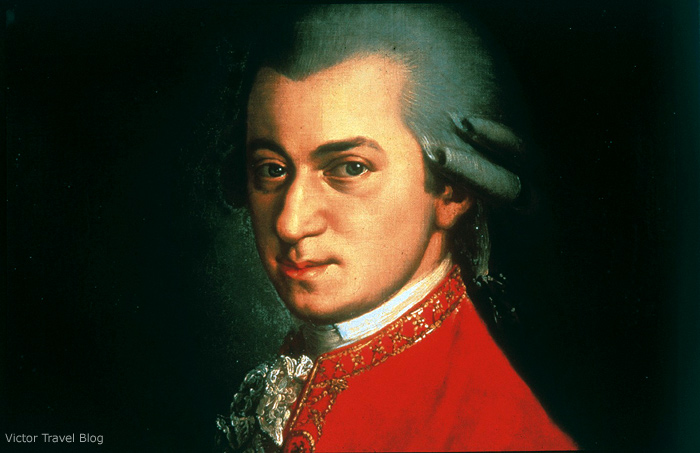 Wolfgang Amadeus Mozart never liked Salzburg. The city was too tight and stifling for his impulsive personality. Mozart was just one of the bishops servants, instead of being a famous musical genius. Today, no one would dismiss such a talent, even if he runs after every petticoat or falls in love with a new actress. Oh, things were different in the times of Mozart.

His father, Leopold Mozart, was a court musician of the bishop, and he taught his son to play music from childhood. The father noticed with amusement that little Mozart started to compose music already at five years of age. Moreover, the young composer wrote such adult music compositions, the like of which many famous composers never managed to create even in their old age.

When Mozart reached the age of eight, he and his father began touring in the Austrian, German, and French courts, and even visited Italyin those times, the Mecca of music. In spite of the boy’s poor health he was made to play at concerts that sometimes lasted for four hours. When Leopold lost his son, he wrote in his diary that probably such early concert practice had exhausted Amadeus health at the very start. The child was frequently ill. By the way, doctors treated patients with mercury back then.

Mozart was a meteor bursting into the demure life of provincial Salzburg and completely burned up in its atmosphere in a short 35 years. His house is still preserved and accessible to anyone interested, but his grave wasn’t kept. The composer died in extreme poverty and was buried in one of the common graves for beggars. Nobody knows where the great Mozart lies.

There is no authentic portrait of Mozart either, and even his death mask was crushed. So, all his images and monuments are very approximate, and we know Mozart only as a puny man in a huge white wig. Concluding this sad story, I want to mention a version of poisoning of Mozart by Salieri which was not taken seriously even by their contemporaries. Did you know that in 1997, Antonio Salieri was completely exonerated by Milan court?!

The legend about the poisoning of Mozart has never been confirmed by evidence. Therefore 200 years after the death of the composer, the trial took place in the Palace of Justice in Milan where all the available historical documents were considered. On the grounds of this examination the court rendered a verdict that Antonio Salieri had no relation to the death of Wolfgang Amadeus Mozart. 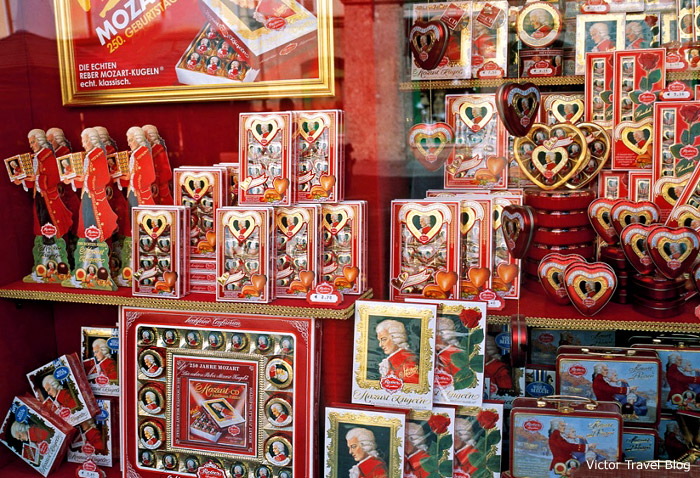 But let’s come back to the city streets. The Hohensalzburg castle was built in long-ago 1077. Its look has changed several times during the centuries, constantly expanding. People say that Napoleon was the person who ended this process by saying: One more brick, and I will blow it all to hell! 🙂 He did not ruin the fortress, but he took away everything he possibly could from it. Nowadays, there is a museum of the history of the city and military history of Austria.

Salzburg Cathedral is the first Baroque cathedral on lands occupied by speakers of German. They say it can accommodate ten thousand worshipers. Salzburger Dom has a marble front and two symmetric towers, and looks rather modest.

The Hohensalzburg Castle. The biggest fortress of Europe. 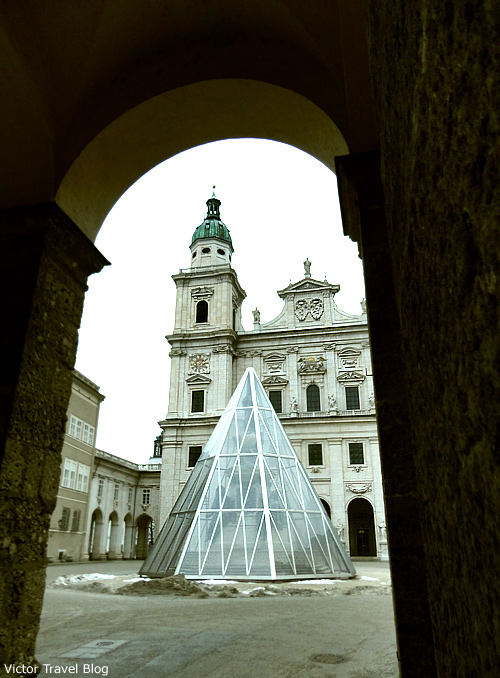 However, without any doubt, the inside of the cathedral is worth seeing. It is amazing. Five organs! Sometime, they sang under the fingers of the great Mozart.

The inside of the cathedral is worth seeing

The interior decor of Salzburg Cathedral is beyond words. The biggest touristic interest is attracted by the baptistery where Wolfgang Amadeus Mozart was baptized, and the amazing main organ surrounded by playing angels.

The ceiling of the Salzburg Cathedral

We gave our attention to the cathedral gates. They also turned out to be an attraction because they were made by the famous masters: Mantsel, Mathare, and Manzu. These gates were so huge and heavy that they were almost impossible to budge. I tried. 🙂

The St. Sebastian’s Church was built in the beginning of the 16th century by Italian architect, Andreas Berteleto. At the graveyard, we found the last remains of Мozart’s father Leopold, his wife Constanze, and the “father” of modern medicine, Doctor Paracelsus.

This is a monument to another famous inhabitant of Salzburg–the confectioner, Paul Fuerst, the creator of the rounded chocolates called “Mozartkugel” which now are well known all over the world.

The glory which never reached the composer during his life, still feeds many citizens of Salzburg. For centuries, Salzburg produced and sold salt, and later beer, but thanks to Mozart, today the citizens have their own symbol/souvenir. They started to produce the original «Mozart» chocolates in 1890, and back then, the chocolate balls were wrapped in a silver-blue tinfoil rather than a golden red. 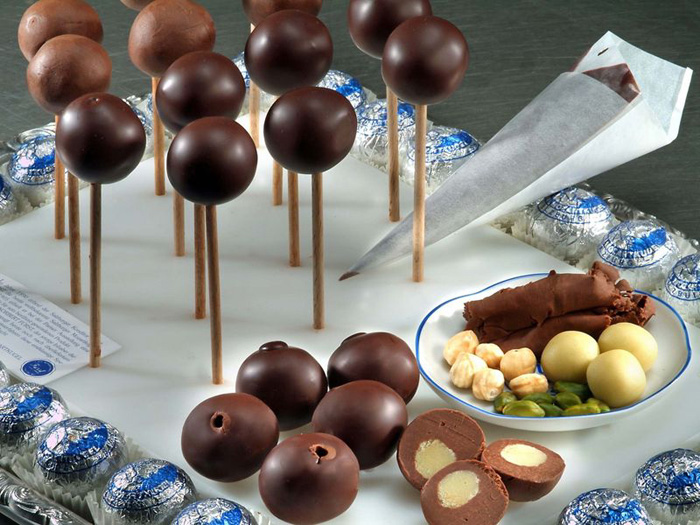 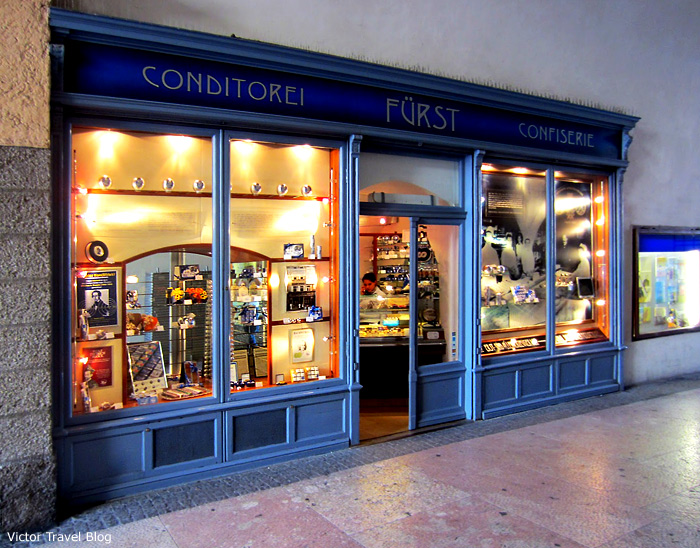 The café-confectionery FÜRST is still in business. Now it is owned by the grandchild of the man who created the famous “Salzburger Mozartkugel,” a round chocolate candy with a bit of marzipan inside and a picture of Mozart on the tinfoil with the caption “Original Mozartkugel.” Every chocolate ball has a certificate. We bought these chocolates for every one of our relatives and friends, but frankly speaking, their taste is not as extraordinary as the homemade chocolates in my favorite Bruges, Belgium (sure thing, we wrote about those chocolates). 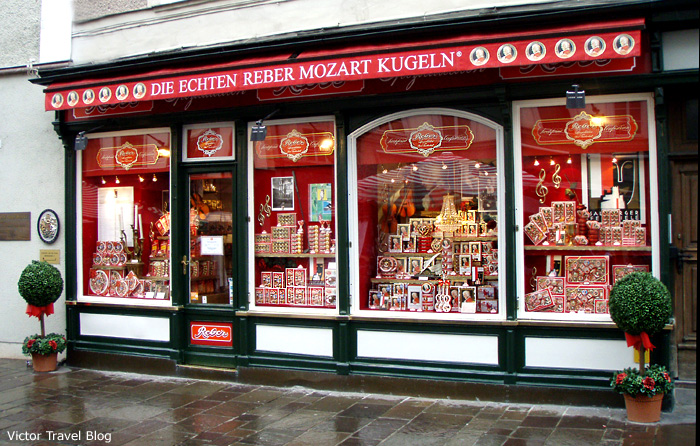 Salzburg citizens are great entrepreneurs. When the city filled with tourists, they started to order colorful packaging in the form of violins for all the local chocolate sweets and make signs with the inscription Mozart which could be seen in every shop window.

What a strange city Salzburg is. Gray color dominates everywhere and creates a sense of constant rain. There are no halftones. A gray cathedral turns out to be amazingly decorated inside, and colorful shop windows with “Mozart” sweets gush kitsch. These sweets are not the best in the world unlike the outstanding music of the great Mozart.

The farewell to Salzburg was easy and fast. We left it with relief because Bad Hofgastein with its blue sky and perfectly white snow awaited us. Moreover, Burg Hohenwerfen was on our way. 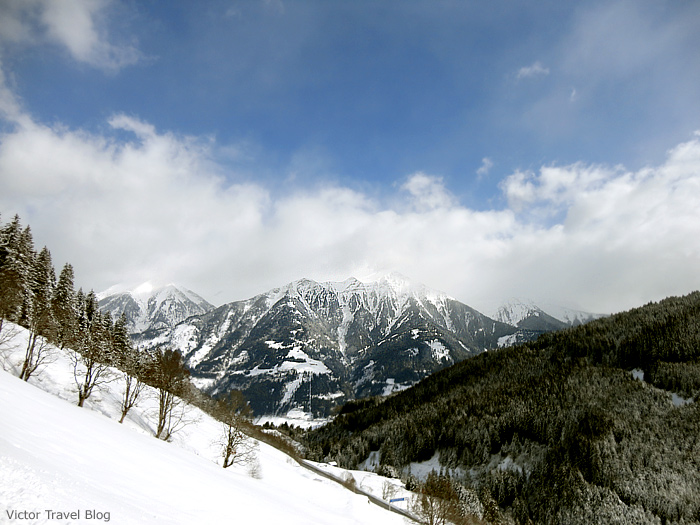 But according to the old Austrian tradition Burg Hohenwerfen was closed till the spring. There is a unique museum of falconry in the castle, and they give demonstrations of the hunting falcons. Of course, we failed to see them. Winter is the worst season for visiting Austrian castles, but Burg Hohenwerfen is amazing in any season! 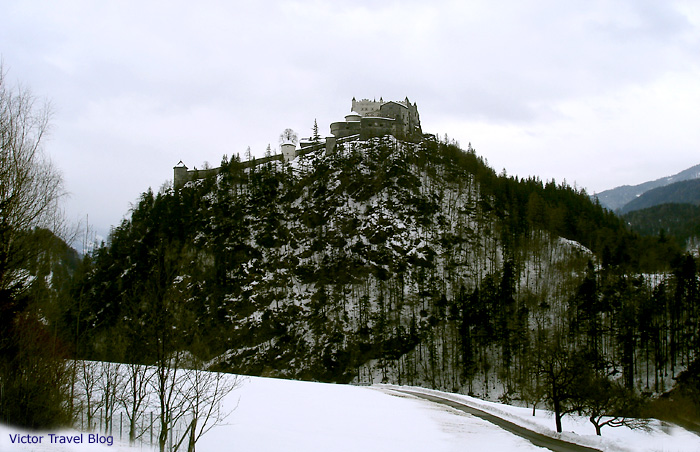 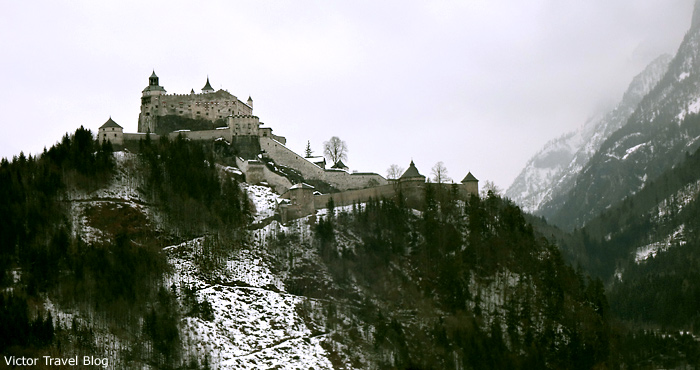 17 Responses to “A Day in the Gray City of Mozart, Salzburg”