Comparing two different parts of paradise may seem like a silly idea. Paradise is a paradise—all is perfect everywhere. Sure enough, if we’re speaking about heaven. Earth is completely different. If you have never been on a tropical island and/or this topic is not interesting for you, you might stop reading right here. But if you have visited at least a couple of such paradisal places (you know, such as the Maldives, the Seychelles, the Bahamas, Bora-Bora and so on), then I hope you will find this story about two Maldivian resorts—Four-star Vilamendhoo Island Resort & Spa and Four-star Reethi Beach Resort—interesting. 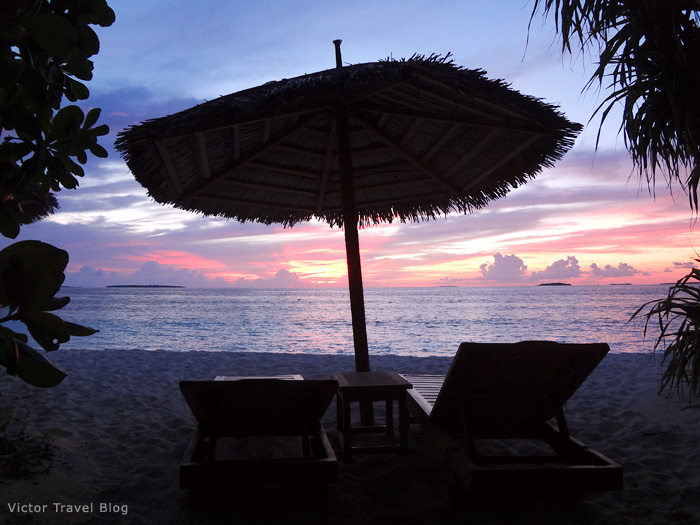 I must say, a little surprise which cannot be consonant with the concept of “paradise” is waiting for you at the end of the story. So, please follow me.

The distance between these two islands is something like 200 km from north to south. Vilamendhoo is south of Reethi. The climate is paradisal in both places. From October to May, it’s warm and sunny. There are mild ocean breezes, the warm water and the air (both between 28 and 30 degrees) white sand, azure water, palms or mango trees, coral reefs, and active exotic underwater life. Have I already said the Maldives are a true heaven on Earth? 🙂

As you might notice, the flora of these two islands is slightly different. There are high palms at Vilamendhoo, and you may see the opposite side of the islands between the trunks. As for Reethi, sometimes it’s easy to get lost among its “jungles,” despite the fact that both islands are equally small.

Unfortunately, in this aspect Reethi loses to Vilamendhoo a lot. Its tiny coral reef—about 500 meters along the west shore of the island—is almost half-dead. 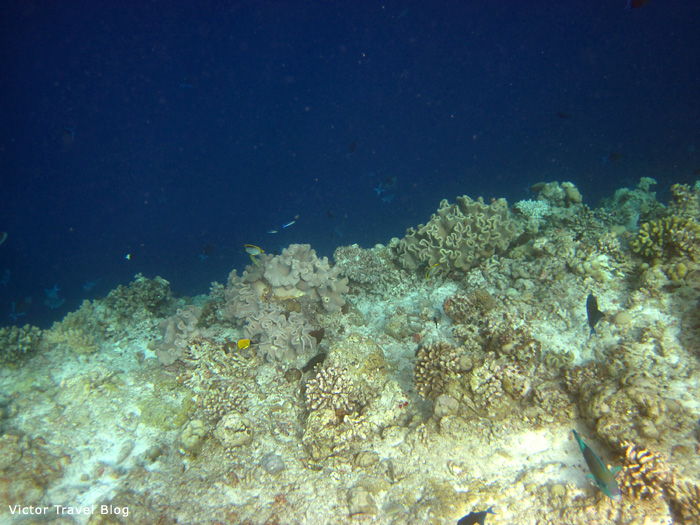 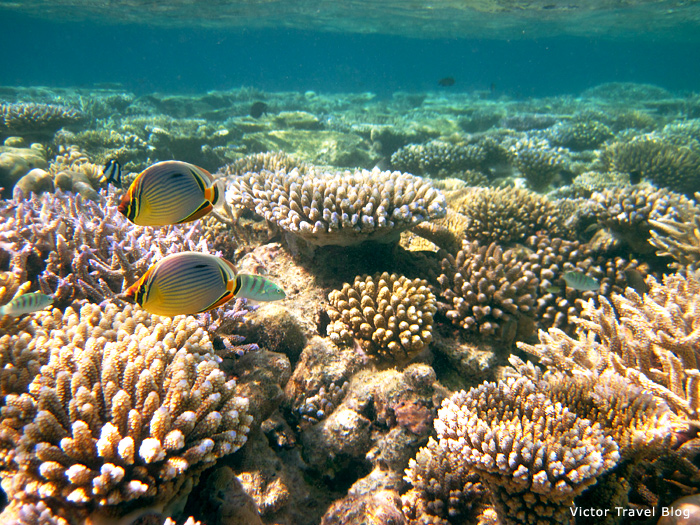 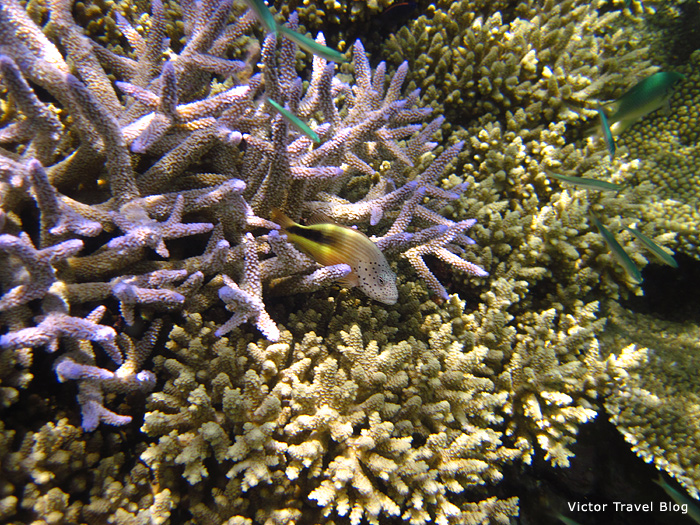 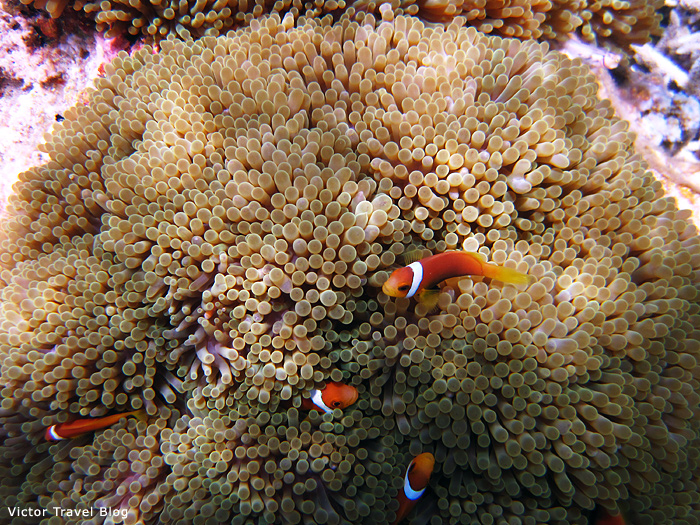 Does it impact on the variety of the underwater life? Yes, but not as strongly as you might think.

In spite of the poverty of the Reethi reef, you may find a great variety of actively feeding inhabitants. I was constantly asking myself: What can they all eat here? Is there anything to eat here at all?!

Reethi Beach Resort, the Maldives. Under the sea

Apparently there is, since we met here not only our old Vilamendhoo underwater friends, but also some new buddies. For example, a turtle (oh, how I love turtles!), octopuses, and giant stingrays (read details below). 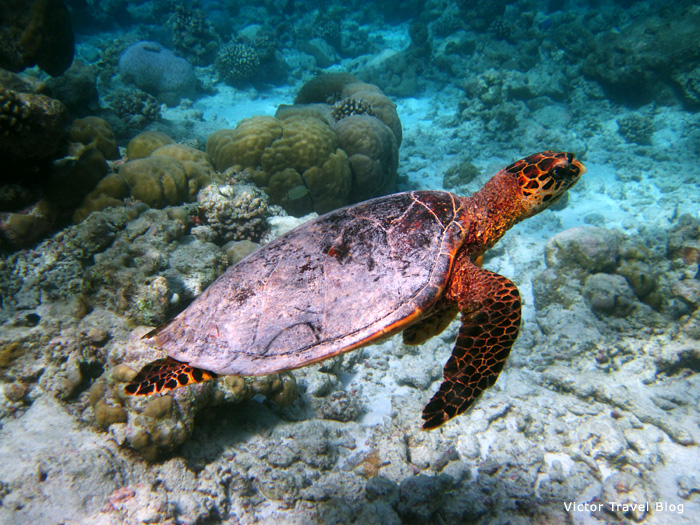 A turtle at Reethi Beach, the Maldives 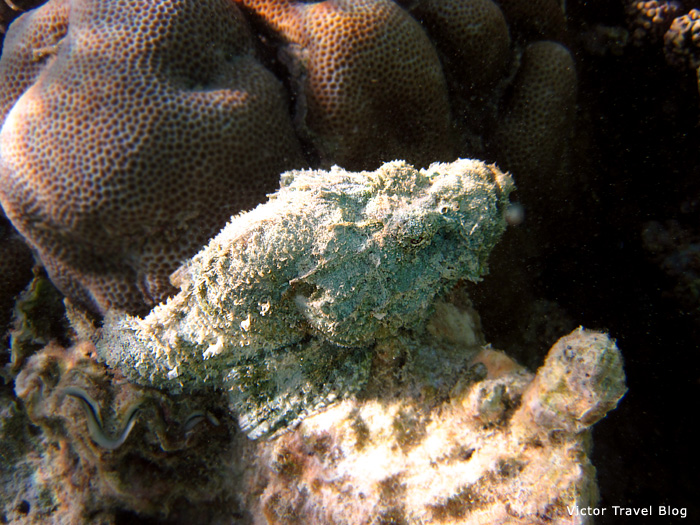 Be careful! The poisonous Scorpion Diable

We swam with stingrays every single day on Vilamendhoo, but at Reethi Beach Resort, some marketing genius invented an amazing thing: he started to feed marine inhabitants at the same place of the beach every evening. Voilà! Every evening at six o’clock, beautiful animals arrive for dinner. 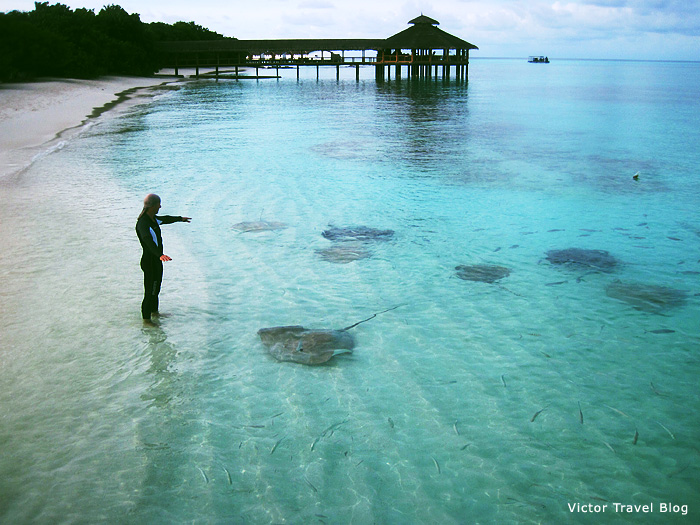 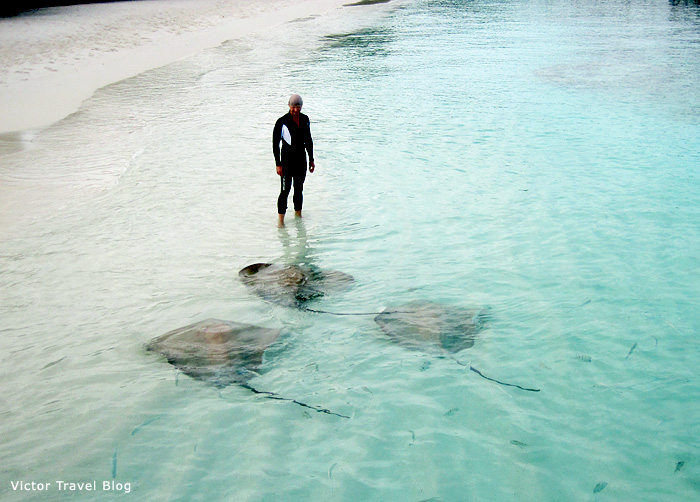 And here the show begins! 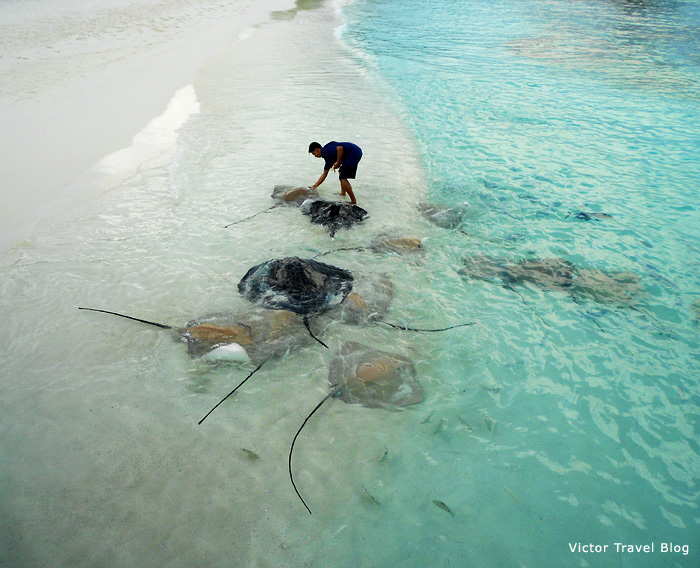 To tell you in secret, this very amusement became the clincher for us to choose Reethi Beach for our holyday.

The villas are quite comparable in terms of comfort, interior, and design, although some parts of the interior in Reethi Beach Resort have needed an upgrade a long time ago already. When it comes to this aspect, Vilamendhoo villas are far ahead—everything is new there. Oh, by the way, there are kettles in the rooms.

Deluxe Villa on the Reethi

However, sometimes inhabitants of Vilamendhoo do not have comfortable access to the beach, because of the lack of the beach entirely. In Reethi Beach Resort, the beach is perfect all over the place! 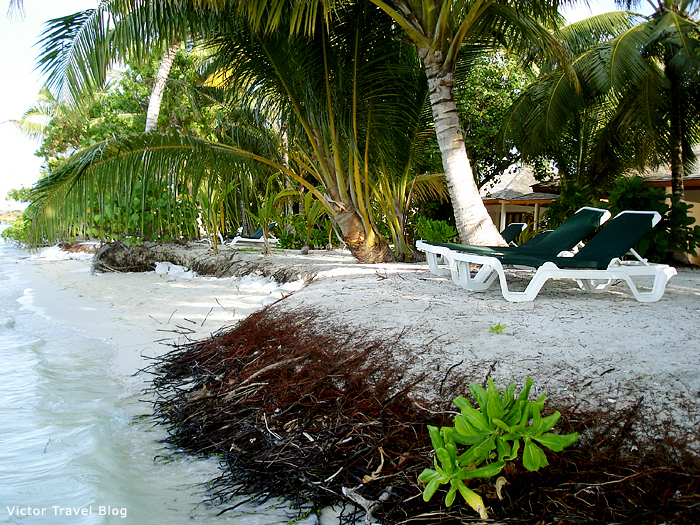 The beach on another side of Vilamendhoo 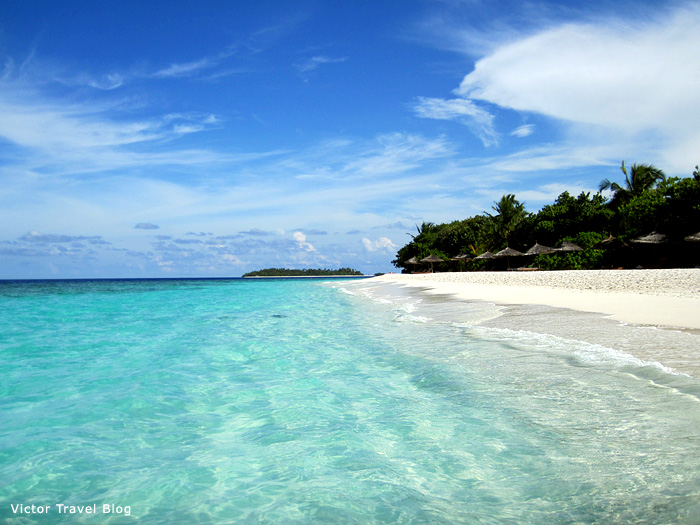 The Vilamendhoo chef is a genius. At least, he was during the 2012-2013 season. The chef at Reethi Beach Resort tries hard, and sometimes cooks some delicious dishes, for instance, fish baked in salt. On the day of French cuisine, he made better ratatouille, gratinee, and quiche than we tasted in France. However, he still needs to get some experience to catch up with the master from Vilamendhoo. As we found out later, the chef at Reethi came from Tunisia. Tunisia is a former French colony, so maybe that’s why he was mostly good at cooking French dishes?

At last, there’s a fly in the ointment that could easily ruin the holiday for some people. 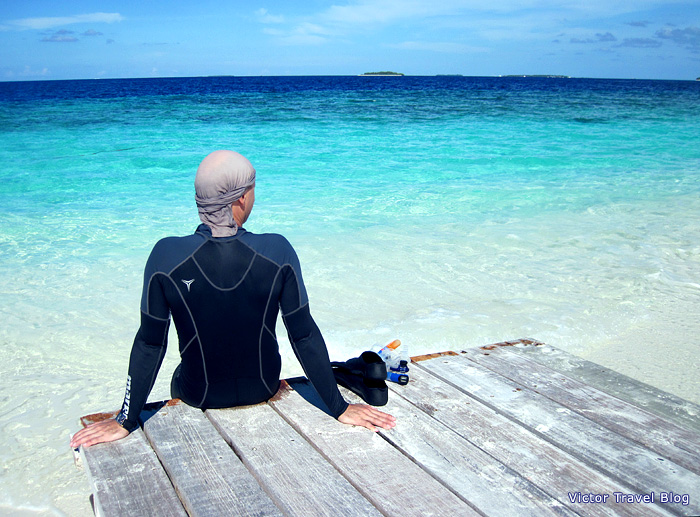 I’ve left it for the end in order to keep your paradisal impressions as long as possible, but…

The luxurious bathrooms of the four-star Reethi Beach Resort are occupied by cockroaches. However, they are not some exotic, magnificent, tropical beetles, but the ordinary red cockroaches, which usually appear in untidy homes. Since my wife can’t stand cockroaches at all, we had to keep the light in the bathroom/toilet/shower switched on all night, and each time she visited these facilities, I had to rush in there on a war horse with sword drawn (well, it was a slipper) to flatten poor insects and take away their cadavers.

Of course, it was kind of romantic. I, a poor but a noble knight, to conquer the heart of my lady,courageously fight the “dragons” and clear a way to her throne.

But if you are not very concerned about romance, and you feel nothing but an aversion to these harmless insects, at least I warned you about the four-star Reethi Beach Resort!

More about the Maldives:
The Best Coral Reef Locations: the Maldives or the Great Barrier Reef?
Shark breakfast. Vilamendhoo.
Dancing with Manta Rays