We intended to have a quick look at the ruins of the medieval Cathar castle located at the very peak of the rocks in the province of Languedoc in France.

Our route was: the Peyrepertuse castle—the city of Carcassonne—the Cardona castle in Spain. Having investigated the route through Google maps and pictures, we flew along the splendid French roads and then turned onto the mountain road leading towards the Cathar castles. The Cathars owned all these lands many hundreds of years ago. Vineyards, vineyards, vineyards.

From the right, the first Cathar castle, Queribus, looked down at us from the top of the rocks, but today, we have another target. 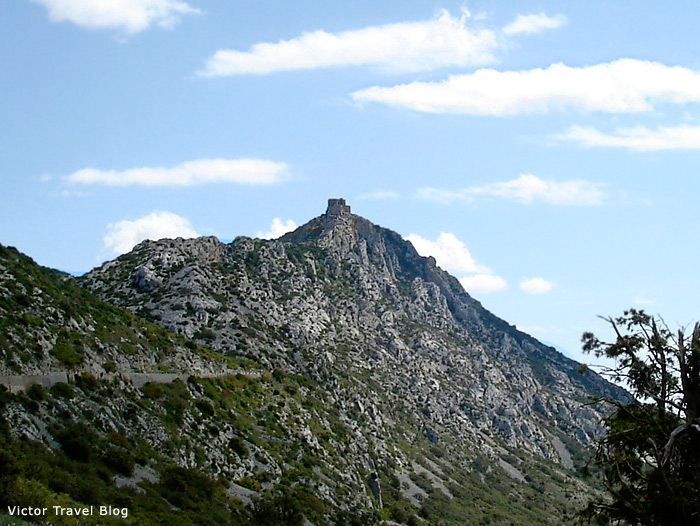 Queribus, one of Cathar Castles of France.

A serpentine mountain road. After the crook up ahead, when it seemed like the right front wheel drove by air above the 500-meter cliff, our main goal appeared—a range of the rocky peaks on the left side of the picture. They are the ruins of Peyrepertuse Castle. 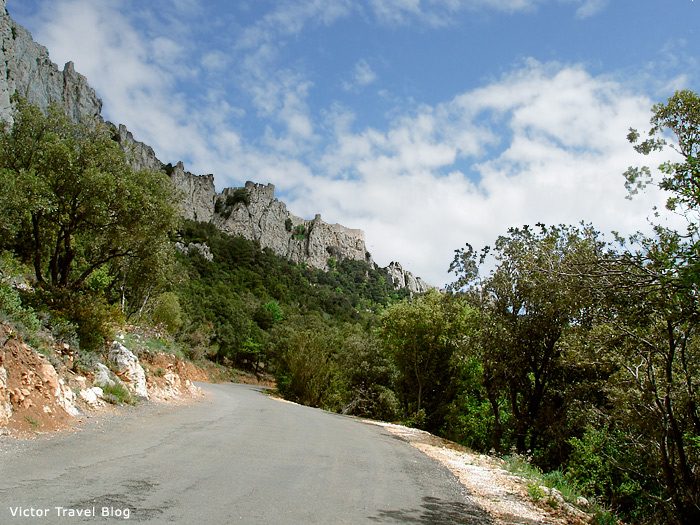 At first, it looked like a huge castle wall, but closer, it turned out to be natural rock with the work of men inspired by those same rocks.

The closer you get, the more magnificent it is.

We parked and had a snack, glancing at all this power from below. Farther—only on foot. 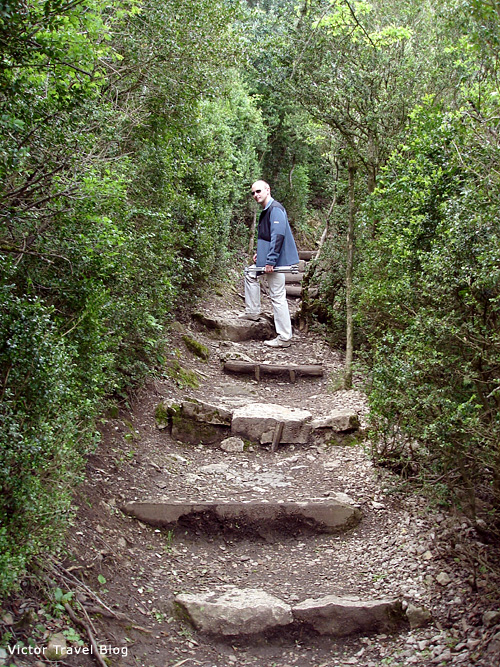 A pathway to the Peyrepertuse castle.

Well, how could anyone storm THIS? It’s slightly creepy just to walk here, although we are not being attacked by arrows from the castle walls. Such a picturesque path lies along the hill, where from time to time, you can see an information board with the history of the castle. The path ends at the central and only entrance to the Peyrepertuse castle.

Why does my hand reach out to these stones and the ancient cement which crumbles at my touch?

Maybe once upon a time, I also stood here in long, heavy chainmail armor, and shot from a huge long-range bow?

And there was boiling oil nearby, poured by my friends down the walls right onto the people trying to kill us. Maybe this is the place where I died? And these stones still remember the taste of my blood?

By the way, we constructed stony walls not just for defensive purposes, we tried to create something beautiful, with decoration. 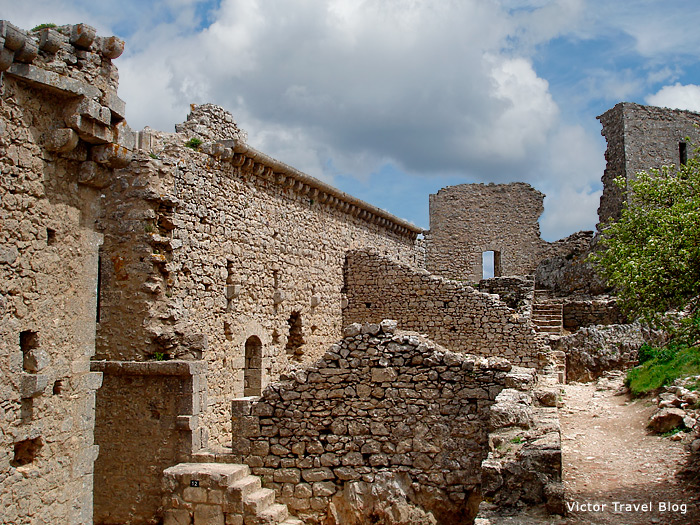 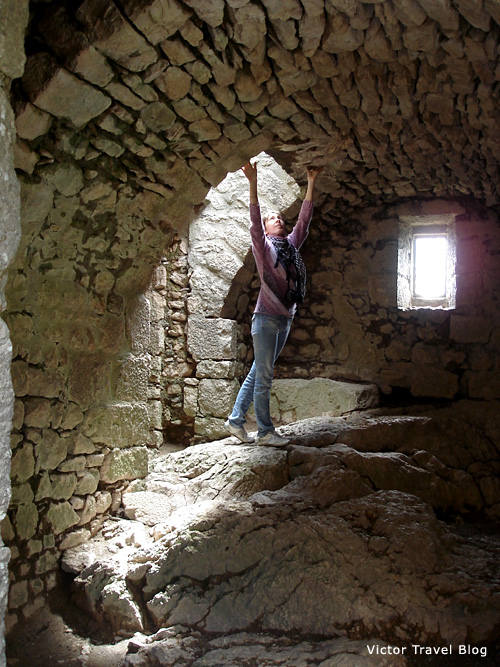 Here we slept and ate.

Here we were on duty, watching for anything suspicious within 50 kilometers. 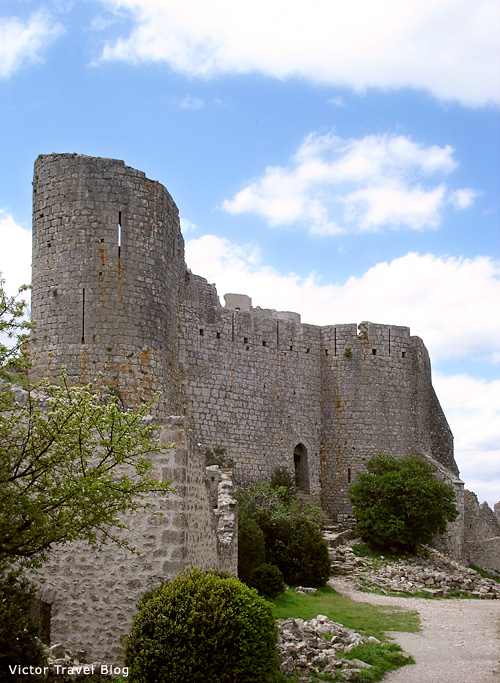 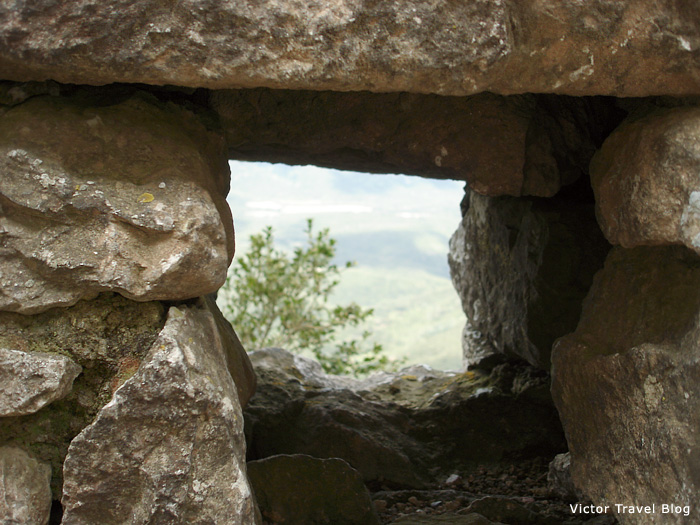 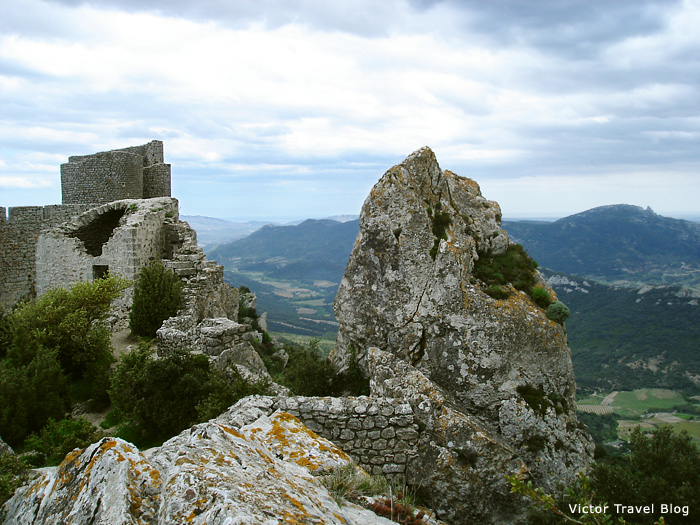 Then we went to our basilica to ask God to keep our lives and bestow victory on us. In vain. We were stormed and colonized by the King of France. Together with the Pope, he killed every Cathar including women and children. 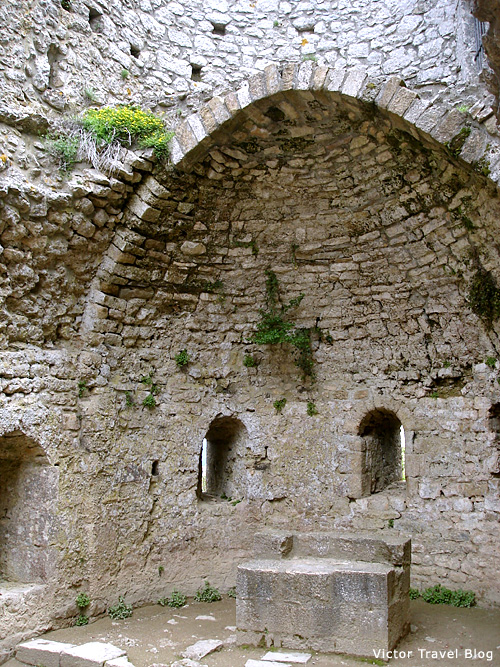 This is our cattle yard. We had plenty of food and drink: meat, wine, cheese, and milk. Yes, we could withstand a long siege.

Oh, does mademoiselle really wish to experience the same sensations as those who attacked us? No. Things turned out well. She used the Master’s stair. The heart of our castle is here on the top—the home of the Master and his family. 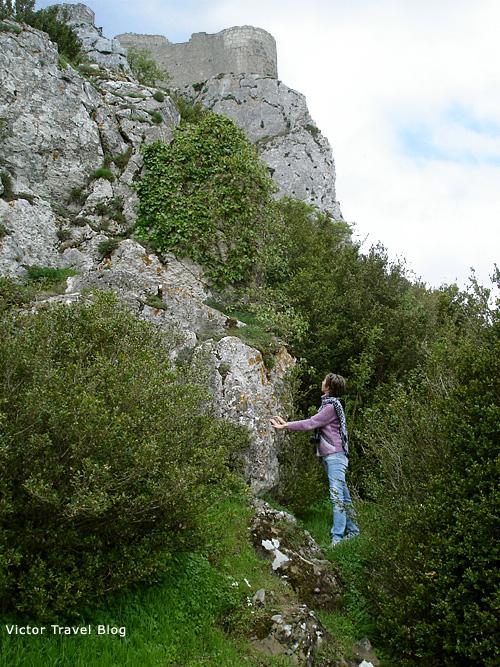 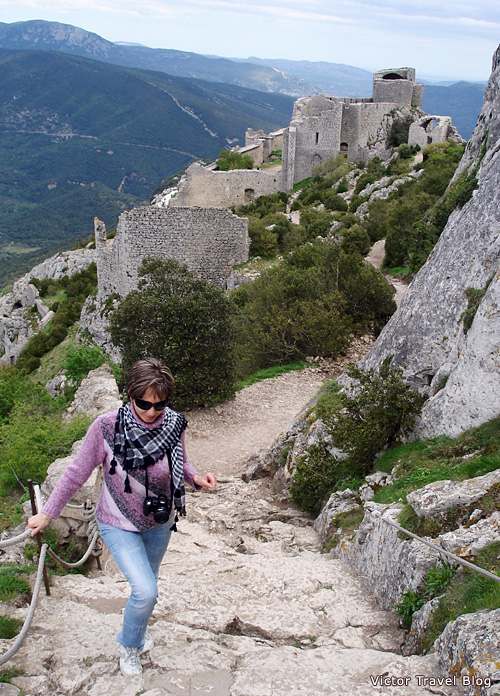 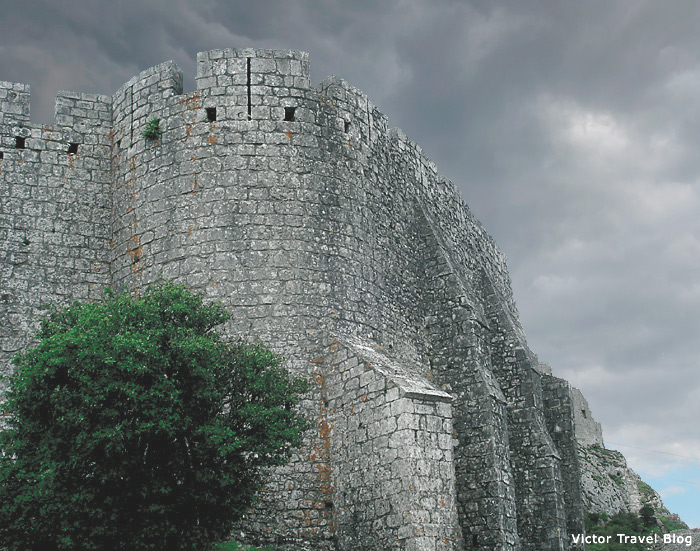 OK, it is written in the guide «An observation room with a fireplace». It is quite clear how to observe—there is a window with a “soft” stone-made sofa, but a fireplace is yet to be found.

The lower fortress, I named it so, myself. Such a view! We are upstairs in the main building, and the whole world can be viewed from here.

Maybe, 700 years ago, the Master (or I?) sat like this by the window pondering the Cathar doctrine:

• Why do people have to worship the True Cross upon which Jesus Christ was crucified?
• You wouldn’t pray in front of a gibbet where your loved one died, would you?

Or maybe he just enjoyed his power, not suspecting that the fall would be rapid and bloody? 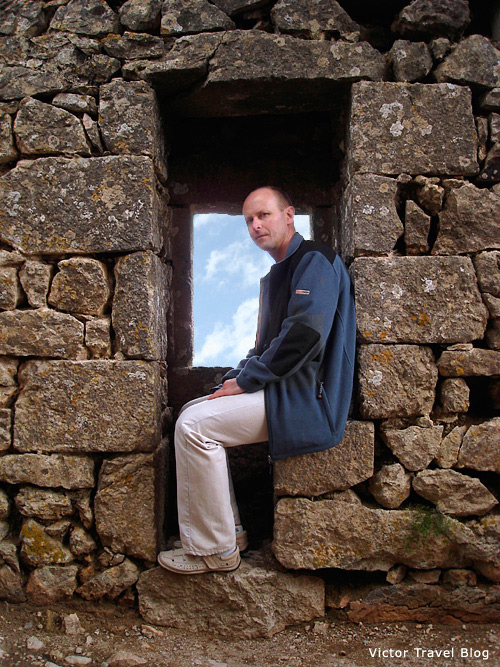 We went on our way to Carcassonne. Are Peyrepertuse and Carcassonne similar? Yes. Are they identical? No. Carcassonne is an ancient city-fortress perfectly renovated in the middle of the 19th century. It is like a modern elderly gentleman—new teeth, implanted hair, face lift, and hormone replacement therapy—what a beauty. 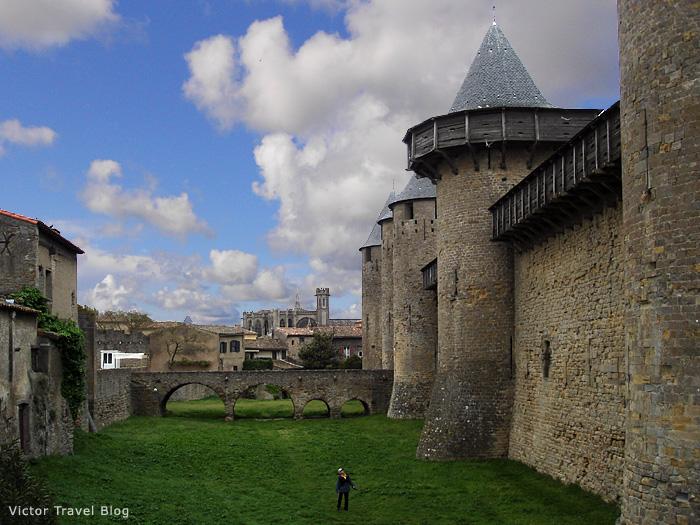 The Peyrepertuse castle is a biblical elder with a white beard fluttering in the wind. He holds a staff and wears a chiton. He is proud, bellicose, clear, bright, and wise. He does not want to surrender to time, he fights without begging for help, but… time, time, time. And he is surrounded by flowers, flowers, flowers. 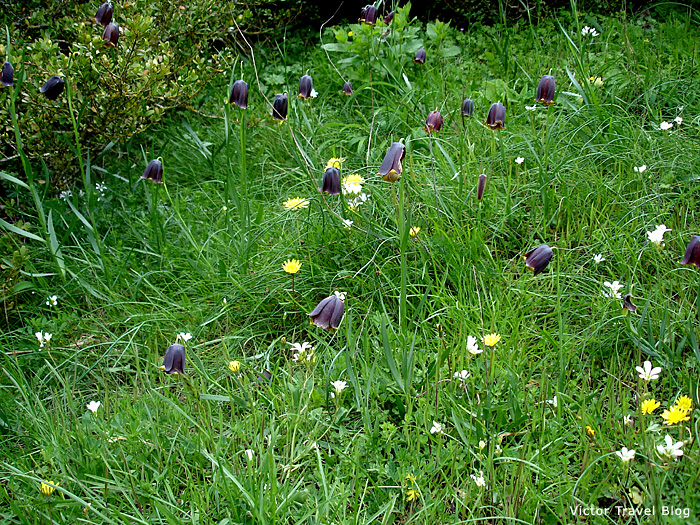 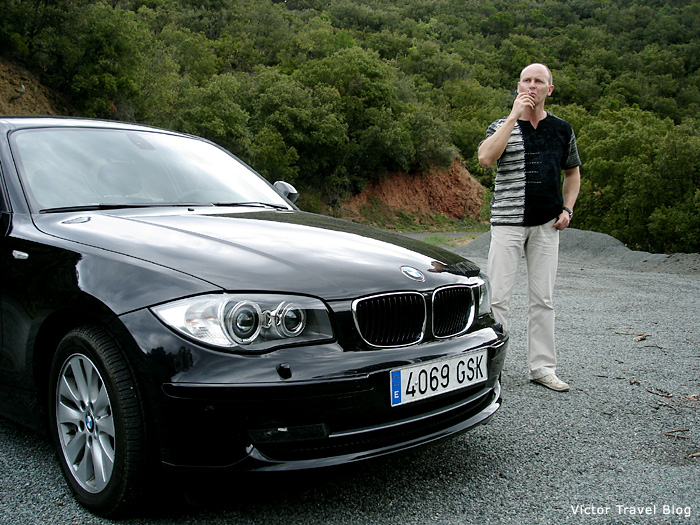 After visiting Peyrepertuse, and on the way to Carcassonne

Other famous Cathar castles of Languedoc

Château de Puivert. Of all the Cathar castles, Puivert is one of the best preserved.

Château de Montségur. Only ruins. Probably, this is the best known of all Cathar Castles. It fell after a ten-month siege in 1244, but was not demolished. The castle was destroyed by Allied bombing at the end of the World War II.

Château de Puilaurens. Very well preserved. The castle is one of the “Five Sons of Carcassonne” along with Queribus, Termes, Aguilar, and Peyrepertuse.

Château de Quéribus. Very well preserved. The castle is regarded as the last Cathar stronghold. It fell eleven years after the fall of Montségur.

Château d’Usson. Only ruins. On March 15th, 1244, the day before 225 Cathar Parfaits were burned alive at Montségur, four other Parfaits left the castle for Usson to where the Cathar treasure had been evacuated a few months earlier. What this treasure was, and what happened to it, no-one knows. This mystery has fed a number of fantasies about the elusive treasure supposedly found at Rennes-le-Château in the 19th century.

More information about all 37 Cathar castles of Languedoc, France, is here.

Montmajour Abbey and the Necklace of the Decapitated Queen
How Not to Die of Hunger, Examining Benedictine Abbey in Jumieges

28 Responses to “Peyrepertuse–One of Cathar Castles”