– In the beginning of summer, Normandy, when plump French cows are put out to graze on young, lush grass, and their milk smells of spring, which means that fresh, soft, young Brie cheese covered with flavored rind would be the highest quality. Moreover, Mont Saint Michel might look fantastic against the green-blue background of summer. Although I suppose this abbey looks wonderful on the background of leaden clouds too.

– In the middle of summer, Provence, to catch a sight of lavender fields.

– And in autumn for the New Wine Festival. Although maybe we would choose Italy for this event.

So, the summer vacation came up, and we decided to go to the south of France to seek lavender fields. Don’t ask me, “Why seek them? They are all over the place there.” As it turned out, to capture a peek of lavender blossom took a fair amount of searching.

On the Internet, you can find anything, and we had read, “In France, the lavender bloom occurs in the middle of summer. At some locations, it fades earlier than at others, but the Lavender Harvest Festival is celebrated August 15th each year at the town of Sault.” Seems we will be right on time!

We took off July 30th and stayed in Lyon for a couple of days. We longed for a new experience and wanted to try a Michelin cuisine. It is no secret that Michelin stars are not given for life; they must be confirmed each year. Our choice of the restaurant Eskis was completely worth it.

On August 1st we left Lyon and moved towards the mountain village of Gordes where we were going to stay for a few days enjoying the sight of French lavender. 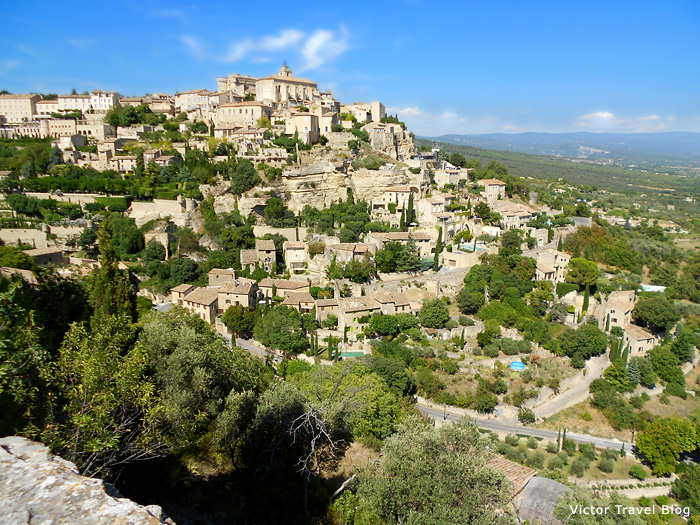 France has marvelous roads. On the way to Gordes we stayed for a while at the Roman medieval town of Vaison-la-Romaine. How could we miss a town with the Roman excavations: a theatre, gardens, atrium, and thermae? Across the river, you will find the really medieval district crowned with the Chateau d Eau (a ruin). We were there for a couple of hours, but of course it was not enough for Vaison-la-Romaine.

Take a look at Notre Dame de Nazareth. Do you see the foundation? 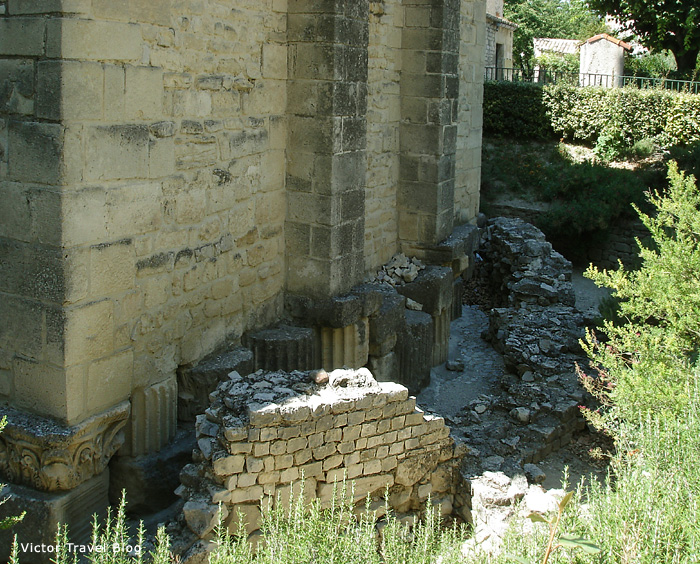 The Catholic cathedral rests on the former Roman foundation, and its origin goes back to Merovingian times, but the latest building was erected between the 11th and 13th century. However, we wouldn’t stay here for long because somewhere out there our first lavender field awaited us and we wouldn’t like to reach the hotel later than five.

Between Vaison-la-Romaine and Gordes, we came upon an unusual place. What it is and who constructed it, I can’t say. Maybe you know?

We had almost reached our hotel. The GPS navigator led us along the local attraction–Abbaye Notre-Dame de Sénanque–an active Cistercian Abbey where a dozen monks produce special lavender honey. You can find many pictures of Sénanque Abbey on the Internet, and almost all of them show the lavender fields around. A pity, but the lavender had already finished blossoming here.

From a designer point of view, we had an unpretentious room, but with a minibar, which means that we had a place to keep our cheese and wine. Let’s start. A glass of rosé wine for the arrival!

The hotel has about twenty rooms. We preferred the ground floor with a private piece of garden equipped with two chaise lounges, an umbrella, and a table with chairs. First impressions are belle France, belle Provence. 🙂 Everything is beautiful. The staff is polite and does not disregard you due to the ignorance of French. There is a strange myth that in France you should speak only French; nothing of the kind, as it turned out. 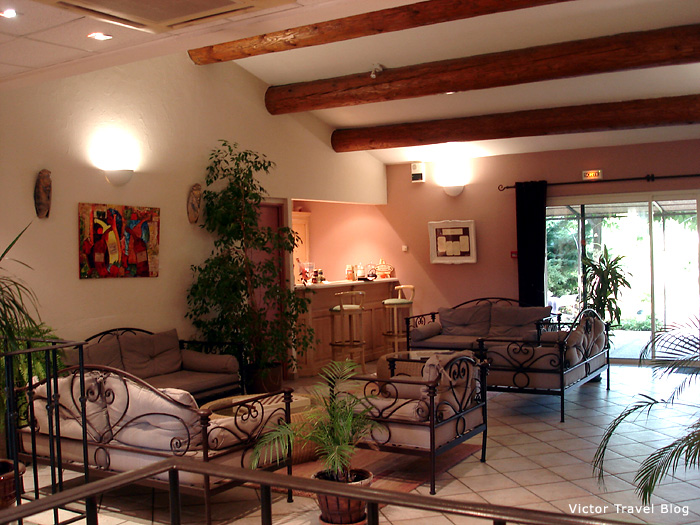 We dined only in the garden and built our plans for the upcoming day.

We are sitting, having dinner and holding a council about lavender fields. Has our venture failed? But we decided not to change our plans for tomorrow, since a farmer’s market takes place at Gordes each Tuesday, and we wanted to buy local fruits, wine, and cheese. However, my persistency has no bounds: I came here to see French lavender which means that on Wednesday we’ll move to the north to seek lavender fields.

Gordes. What a lovely town, one of many tiny towns of Provence. Early morning. Still no people.

The businesses open only at nine o’clock. For us it’s quite late.

Well-well, the selection of cheeses is poor here. You should visit other French provinces to buy more different kinds.

Oh, this is my first lavender; it will go with us. 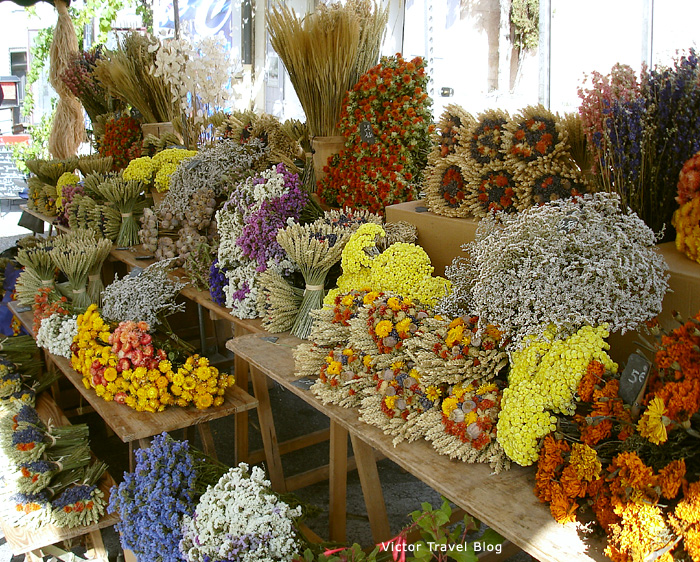 Rosé wine is very popular in this region of France. It is served very cold, so the bottle/pitcher/glass immediately mists as soon as it appears at the table. We found out that such rosé wine is really great on a hot summer day. 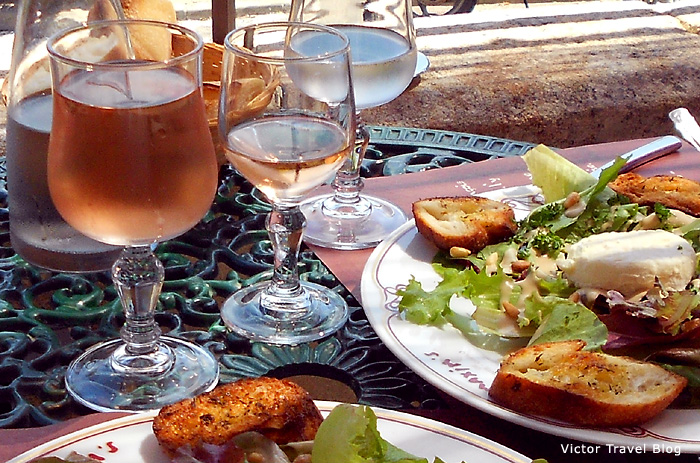 In the hottest time of the day, it was so nice to have a rest in the silence of our little garden to read a book or check e-mail, or swim in the pool surrounded by the sparse bushes of lavender. 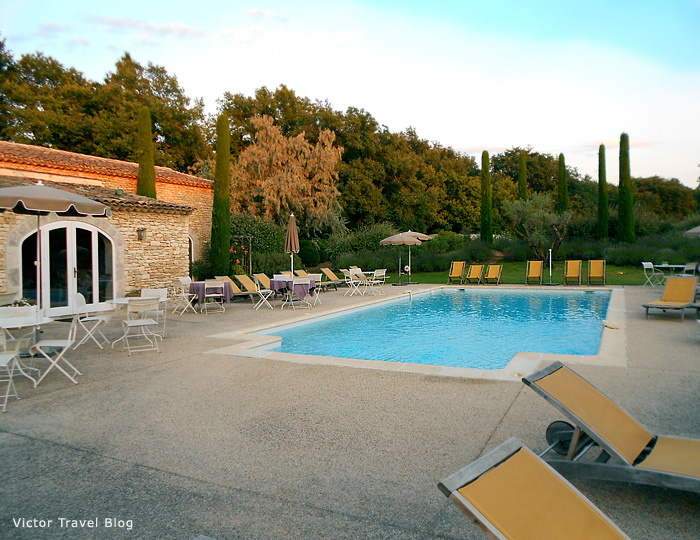 Hotel Mas de la Senancole is quiet and cozy, not posh and pompous. After all, it is a village, though a French village.

Of course, we saw blooming lavender, but it happened only when I had completely lost hope. That day, our small team took this pretty auto…

…and moved toward the French lavender center–the town of Sault. We equipped ourselves with a list of villages surrounded by dozens of lavender fields, but on our way, we met only grey fields, finished blooming. We visited the unbelievably colorful town called Roussillon, but the lavender had already been cut there. What a disaster! “Let’s go to Sault using the north way?”

However, this is private property. We do not know French but understood “propriété privée” on the doors. Nonetheless, we were longing to take a peek and take some pictures. Just a kilometer away from Chateau Javon, I cried again: Stop, stop, stop! Here it is! The vacation is a success–we have just passed a blossoming lavender field. Hit reverse!

Here it is, our first blossoming lavender field 🙂 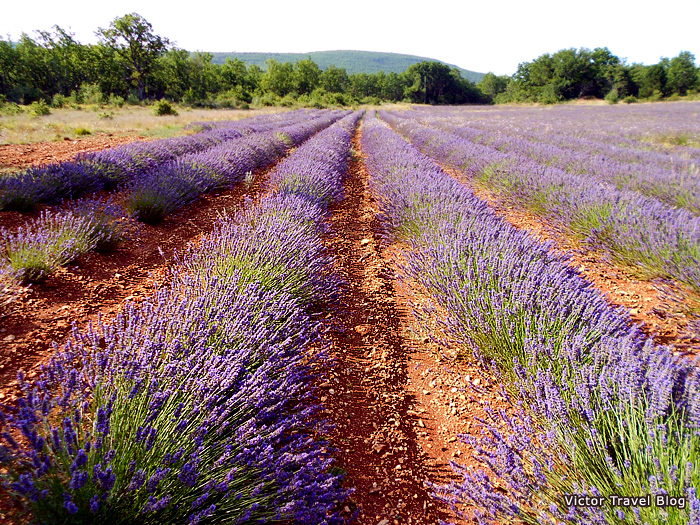 That day, on the way to Sault, we were lucky to come across several villages decorated with lavender. The lilac carpets of blossoming fields were spread here and there. 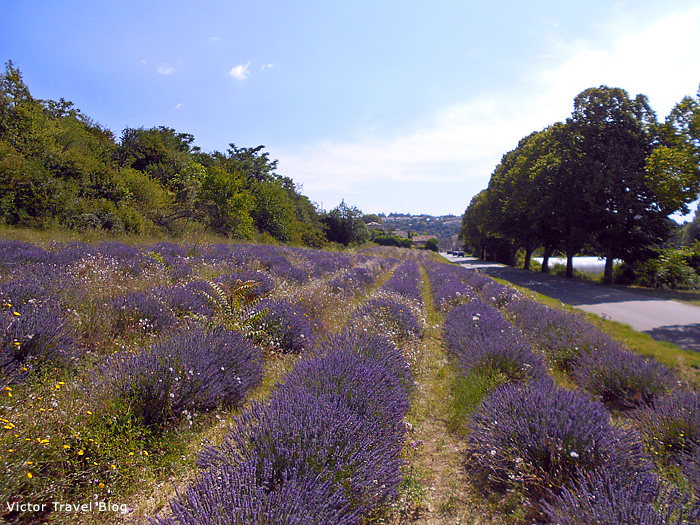