We were going to one of the most famous tourist regions of Germany. In the stretch from Worms to Koblenz, the navigable Rhine winds back and forth, and there are dozens of medieval castles and towers which rise on its high, often rocky banks. 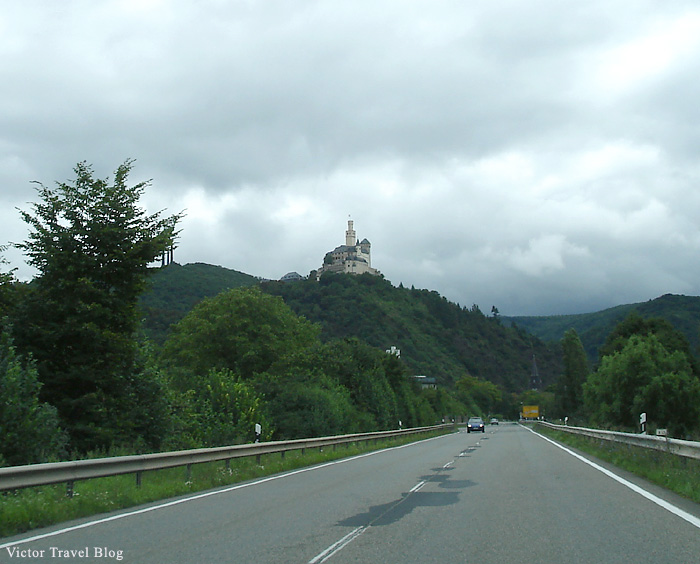 We preferred the road of castles to the road of wine, but the banks of the Rhine and Moselle are densely planted with the vineyards, and the Riesling was perfect in every place we stopped. 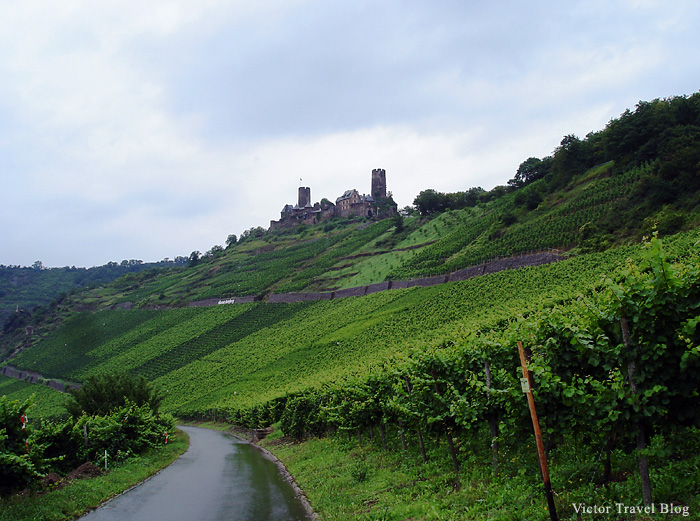 View of the castle Thurant on the Moselle River

We chose three castles for viewing—Marksburg, Burg Eltz, and Burg Stahleck—because, unfortunately, we did not have time for more. The first castle on our way (and nearest to the airport) was Marksburg.

It seemed that it was destiny!

We had seen this castle in a guide-book. This big, picturesque tower half-hidden in the mist looked mysterious and utterly attractive. But, beware! 🙂 The picture taken from a chopper was wonderful; a marked contrast to the one we managed to take ourselves.

We left the car at the foot of the hill and started to climb a path through the woods in the direction of ancient Marksburg. It was still. We were walking along the remains of moss-covered walls.

The climb was not very long—approximately 15 minutes.

Here is the gate, but, unfortunately, it looks like a moulage. 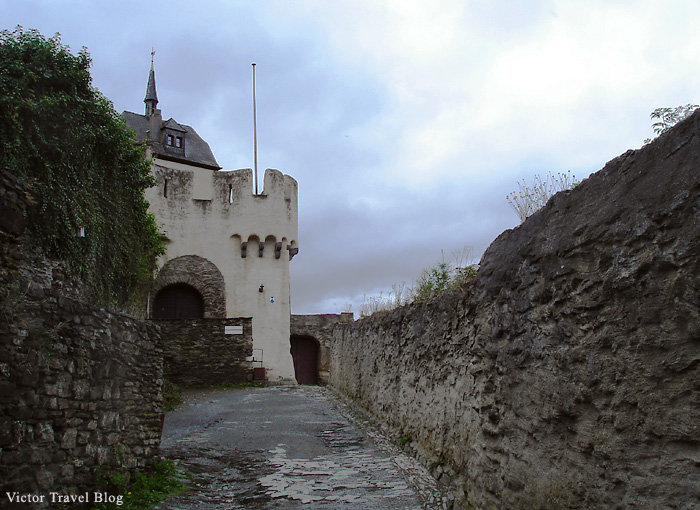 Fake castle—it is a blunder!

Marksburg dates from the 12th century. The castle tower is situated on a high hill and it was considered to be impenetrable for centuries. 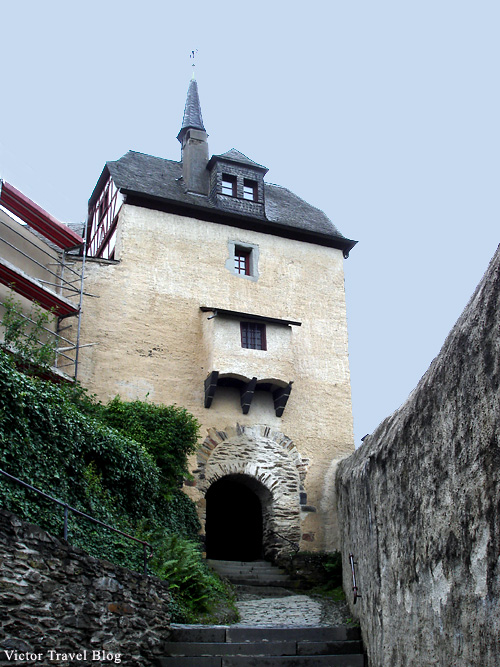 We are here on behalf of these stones. They are the only things that survive of the stairs, and they are so authentic. 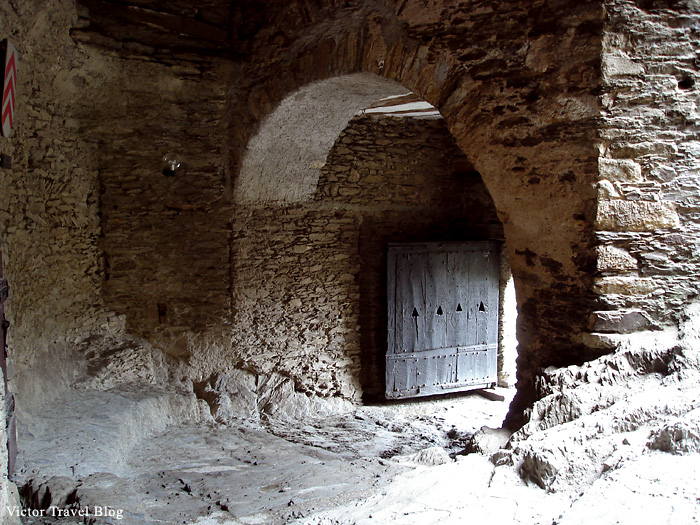 The clash of heavy armour and knightly warhorses is felt here everywhere. The walls are covered with coats-of-arms of former owners.

Unfortunately, the fortress was almost completely destroyed by American artillery in March, 1945. After recovering from the war, Germany began to restore what could and needed to be restored. By the middle of the 1950s, Marskburg was rebuilt and became the property of the state. It is a museum today. The museum’s collection is modest, but its small arms hall is quite impressive. 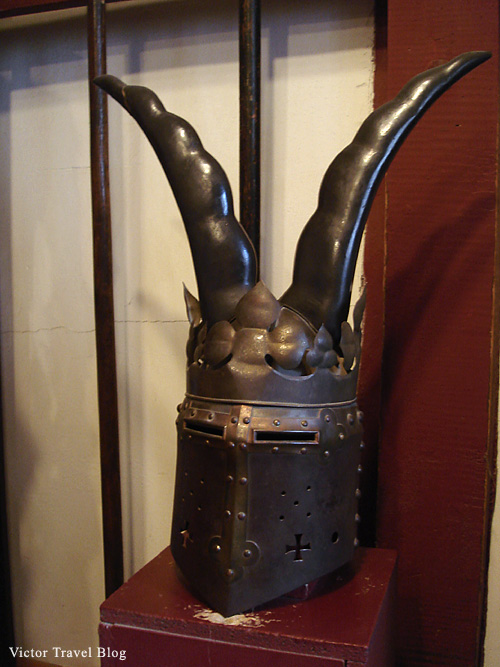 At the same time the view to the bend of the Rhine is very attractive. Tomorrow, Burg Eltz is waiting for us. 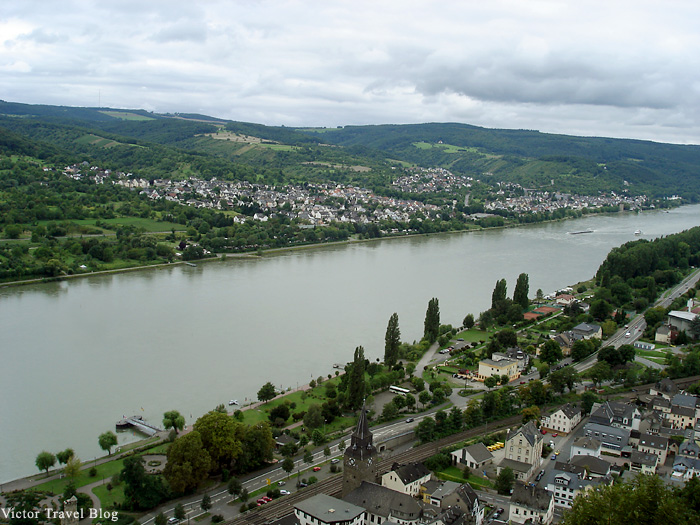 After an overnight stay in Koblenz our Mercedes headed directly from the Rhine bank towards Moselle. It was only 30 km to our destination.

It is remarkably that within such a short distance the landscape changed several times. Wheat fields alternated with forest, and at last we saw the hills which sheltered Burg Eltz castle from invaders.

Here, almost a thousand years ago, the Eltz family built their castle on a tiny patch of the rock surrounded by a narrowing of the river on three sides.

Despite the great number of wars that swept over this region for a millennium, the castle survived undamaged. The Counts of Eltz turned out to be thrifty managers.

It’s time to come in. Oh, it is a genuine dreamboat! 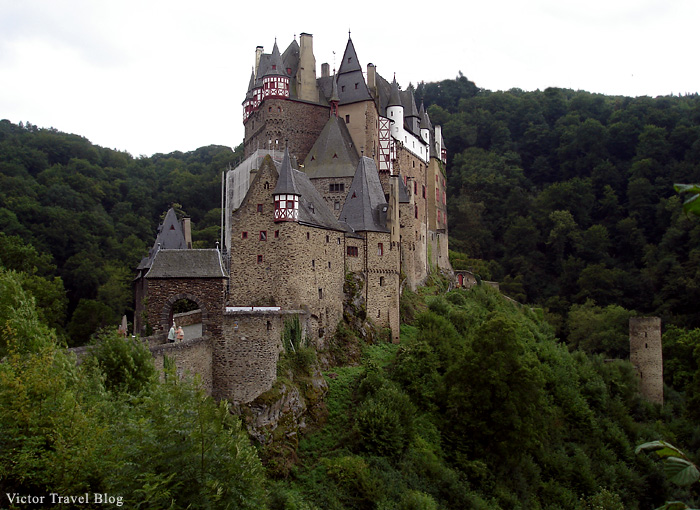 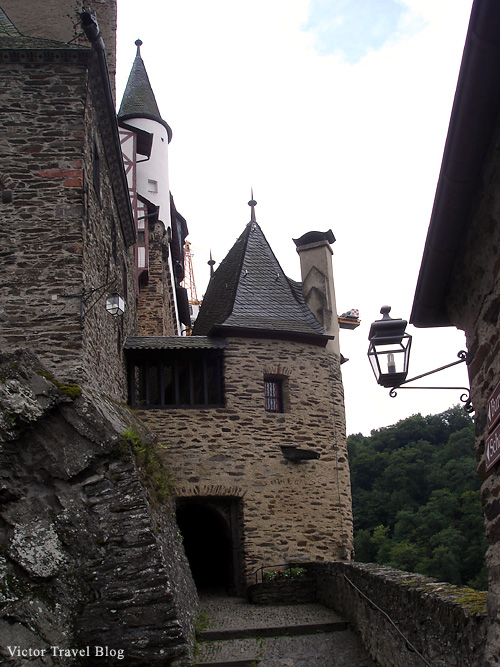 33 generations of Eltzes owned and continue to own this miracle! 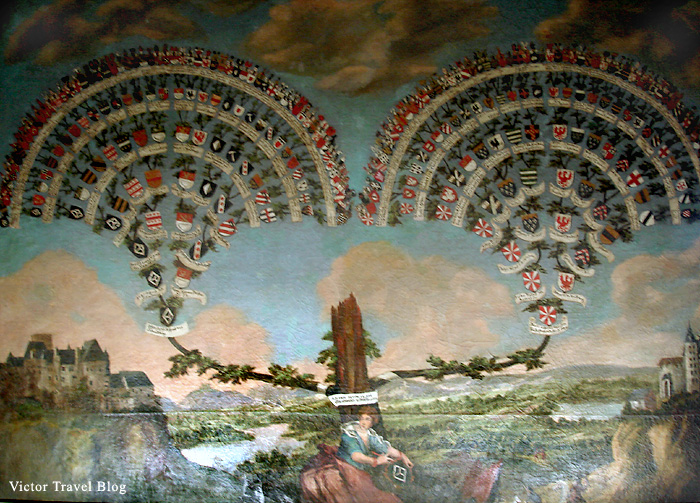 As long as Burg Eltz is private property, only a part of the courtyard, treasury, and eight rooms of the castle are available for viewing. Taking photos in rooms is not allowed by order of the Count of Eltz, but it is permitted in the treasury. 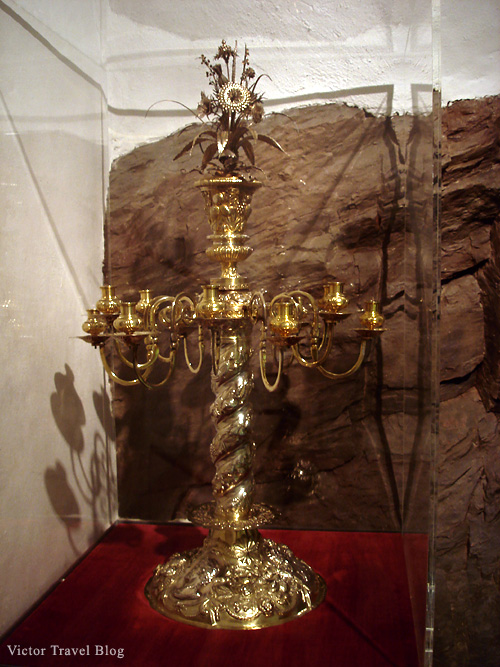 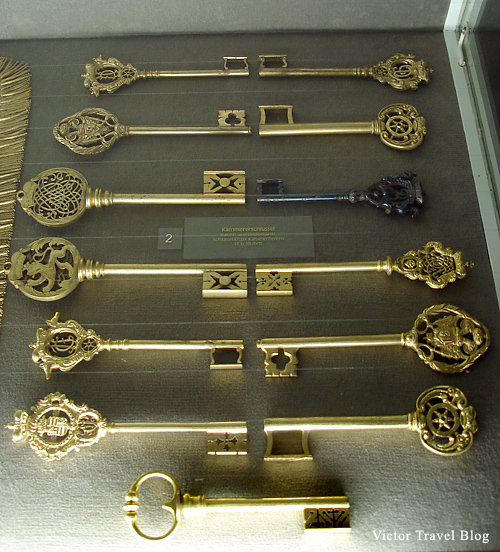 “Come on, stop fooling around! Are you really in need of these treasures?!”

We would be kicked out, definitely! 🙂 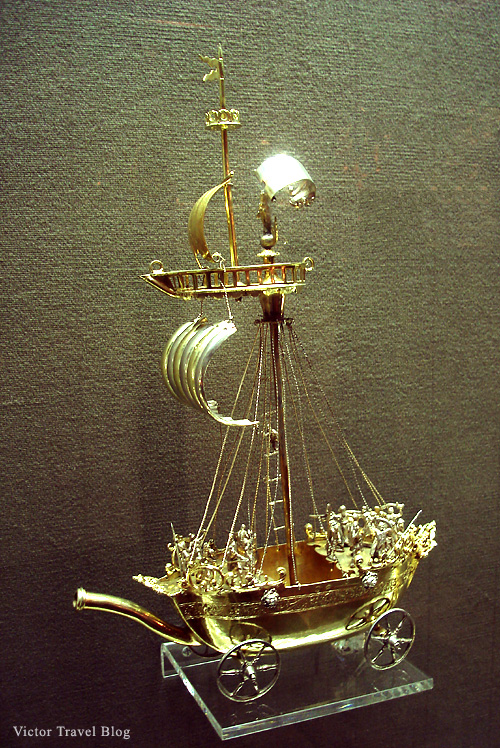 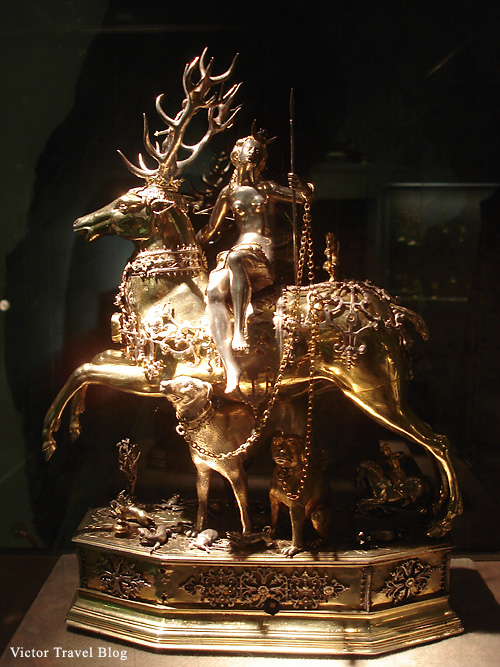 Now we should hurry up to the Count’s apartments. Well, what should we say (as we have no photos to show)? The place has a romantic atmosphere, which gained popularity in the middle ages. On the walls are the originals of arms, paintings, and tapestries dating from the 13th century. The fireplaces are masterpieces of art! Almost all surviving furniture is original from the 15th century.

Time and fashion have changed a lot since then. You will feel all these changes while you visit Burg Eltz inside and out. 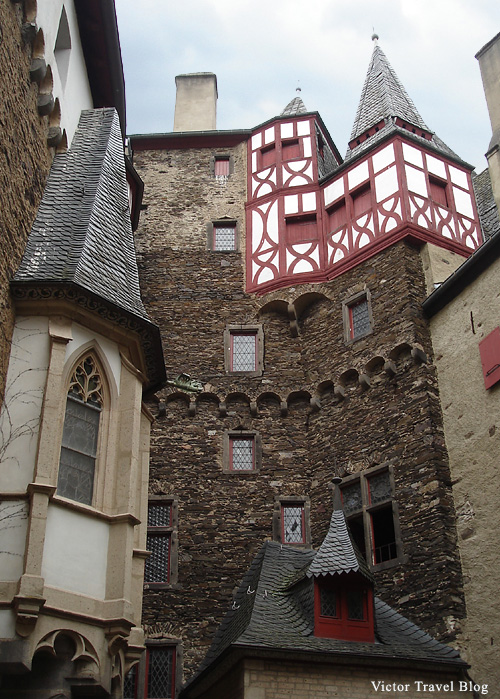 Two hours passed quickly. There it went, so fast! We’d rather not go, but we had to. We were on our way, after a last passing glance at the view from the castle walls, and a coffee for the road (several cafes, restaurant, restrooms—all these facilities are kept scrupulously clean in the German manner for the benefit of the tourists).

The feeling of being in a time machine! Looking back, I’d like to say, that Burg Eltz appeared to be the best of our castles! This is its website burg-eltz.de

We left, together with the tinny Teutonic knight as a memento. 🙂

It was approximately 80 kilometres to our next destination, Bacharach, a place that seemed like a toy town. The road trip was scenic and the town met our expectations as well—sparkling and bright as a Christmas decoration. 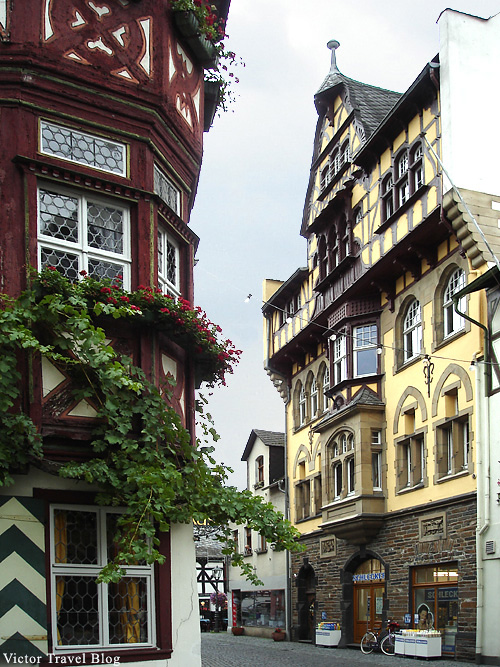 Burg Stahleck was a logical choice.

After an overnight stay in Bacharach and presumed viewing of local castle—as we say “all good things come in threes”—the team at Mercedes planned to move to ancient Trier to see Porta Nigra with our own eyes.

We liked Bacharach greatly, as well as other tiny towns on the Rhine: an excellent diversion for one night.

And wine… What a wonderful white wine is here. We have replenished our supplies!

We’d like that this night would passed quickly—the castle was waiting for us the next day.

We climbed to Burg Stahleck early in the morning. It was a three-ring circus, with teenagers hurling pillows at each other, the fuss in the eatery, the smell of coffee from a coffee vending machine…. Golly, there was a hostel in the castle. Though none of this interrupted our sightseeing, we left Burg Stahleck after only a quarter of an hour.

The historical atmosphere of this place is lost permanently, and the legend which brought us here is so meltingly sad… The real dark Middle Ages…

A long time ago there were two castles in close vicinity (the second one is almost completely ruined today). The terribly green-eyed owner of Castle Stahleck decided to capture his stronger, braver and more glorious neighbour, the First Shooter! Well, let’s see how you will grovel at my feet and beg for mercy. The command was given to servants; the neighbour was spied out, captured, and taken to a black hole.

The prisoner was completely distressed, but he did not beg for mercy and did not ransom. This First Shooter is a stubborn beggar. As a punishment “put out his eyes!”

I don’t know what the baron-captor was guided by, but one day while feasting, he decided to boast of his victory to his friends. It seemed that he was not afraid of revenge. It was a gloomy time. The prisoner was brought in and nobody took him for a brilliant knight.

The captor had already become obsessed. “Well, First Shooter, I will reward and release you if you hit the cup I throw into the air.”

The crossbow was carried out. A silver cup was thrown into the air. “Shoot!” The First Shooter’s arrow ripped right into the throat of the man who cried “Shoot,” and not into the cup. In several minutes everything was over.

When this story reached the King, the castle of the criminal Baron was confiscated. A hundred years of silence and desertion were waiting for Burg Stahleck and later the castle was seriously ruined during Napoleonic wars. Only now it seems that history has left this place forever.

We left the romantic Rhine. Three castles in two days. We wished to see more! Choose carefully. In this land of legends, there are many places to see. Every rock is crowned here.