The purpose of this journey was to look at the wonder, the ancient Nabataean city of Petra in Jordan. It is the most visited tourist attraction in this country, and probably one of the Wonders of the World. At least, one building in Petra is a piece of art without any doubt.

A little of history

The Nabataean kingdom reached its apogee about 2000 years ago. Its capital was the city of Petra. In the mountains in the middle of a hilly desert in the territory of modern-day Jordan, nature, time, water, and wind created a narrow passage leading to a small valley in which the Nabataeans built their capital. All the buildings were carved inside the rocks.

At the beginning of the Common Era, the city gradually lost its commercial importance and finally fell into decay. Petra was rediscovered by Swiss traveler Johann Ludwig Burckhardt only in the 19th century.

After visiting the Luxor Temple in Egypt, we flew to Jordan and moved by bus from Aqaba Airport to Petra enjoying glorious views of Jordan all around. Like these: 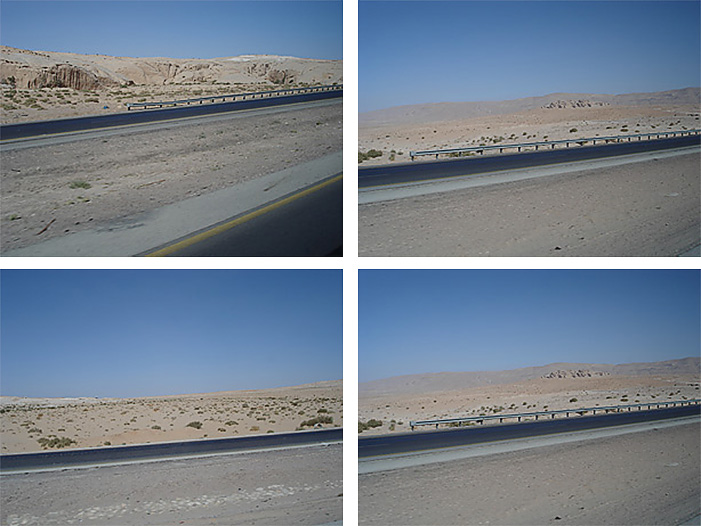 To meld with the native population and watch them discreetly, we took a decision to put on ethnic Jordanian clothes, at least, on me.

It “worked!”
I was the only man in the whole of Petra in such clothes. 🙂
As a matter of fact, we became the subjects of special focus for every tourist (their cameras were shooting at every step) and local gypsies (though they call themselves Bedouins).

This is the road to the ghost city of Petra–a narrow and curving three-kilometer passage in the mountains of Jordan. Sometimes it becomes narrower, sometimes it widens. 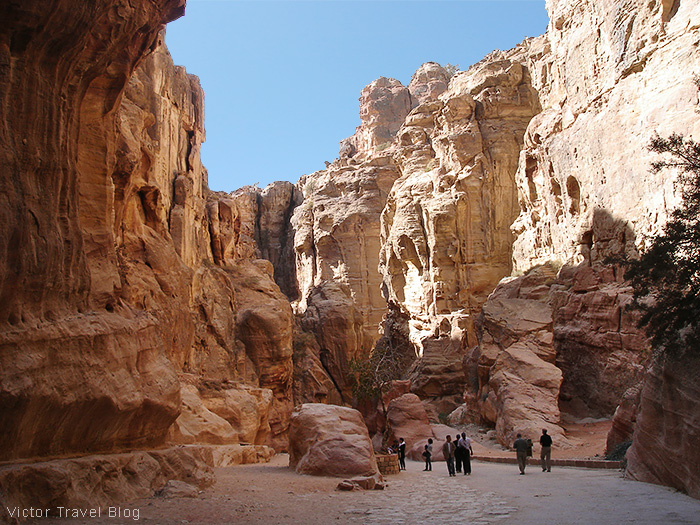 In one of the walls, an ancient artist carved a camel and his owner. You can distinguish the belly of the camel, his hooves below, and his owner to the fore (to be more precise, only his legs). A trough of the city water conduit system lies between camel’s legs. Unfortunately, time was cruel with this piece of art.

While my photographer was shooting me in Jordanian national dress, I took photos of her. Do you see staircase behind her which leads nowhere? There are plenty of them here.

Here is one of them—a stairway to heaven.
I prayed a bit at the top, just in case.

Petra. The Capital of the Nabataeans

Until this moment, we mainly admired miracles of nature, but suddenly, an artificial miracle appeared. The most famous building in Petra, the Treasury, modestly peeped out from between the rocks. The contrast, impression, and shock were significant!

THIS was just carved inside the mountain! No drawings, no round parts of columns as in Greece—the building just carved into the stone from top to bottom.

It is hard to believe that it was made by people 2000 years ago!

Interior decoration is not required—the hall is beautiful without it.

There are various commercial buildings around the Treasury.

This one was, perhaps, some important Ministry. The stairway. I’ll have a look. 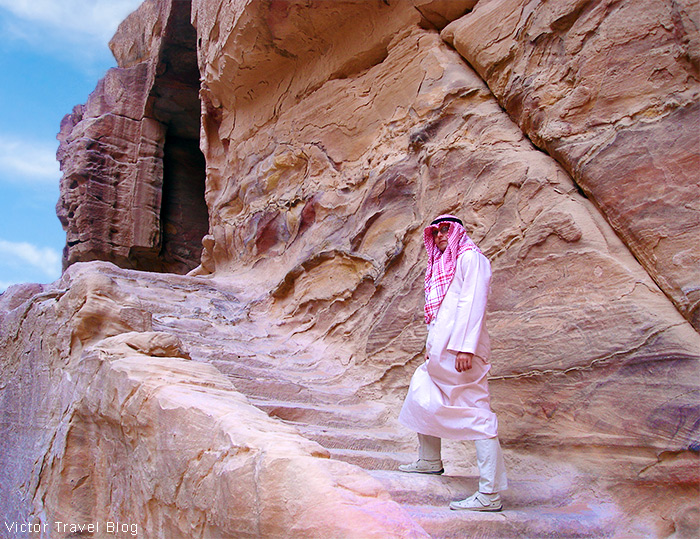 The ubiquitous Romans managed to capture even such a natural stronghold as Petra. It stands to reason that they immediately carved a theater into the rock, and the temple nearby.

Rich Nabataeans had bigger caves—well, apartments—sometimes even with two floors, stairs, and passages, but most had only one room.

Due to the effects of nature, there was no need to decorate walls and ceiling.

It seems, my photographer tired and lay down to rest under the broiling sun.

All right, I’ll call a chopper.

On our return from Petra, our Jordanian guide asked, “Is it possible to call Petra a Wonder of the World?” Definitely it is possible.

74 thoughts on “Petra in Jordan: Our “Spy” Mission in Fabulous Capital of the Nabataeans”