This is a symbol of Trier, small city in Deutschland, and the part of the ancient wall around it, which was erected in 160-180 years. Porta Nigra – magnificent and majestic building… 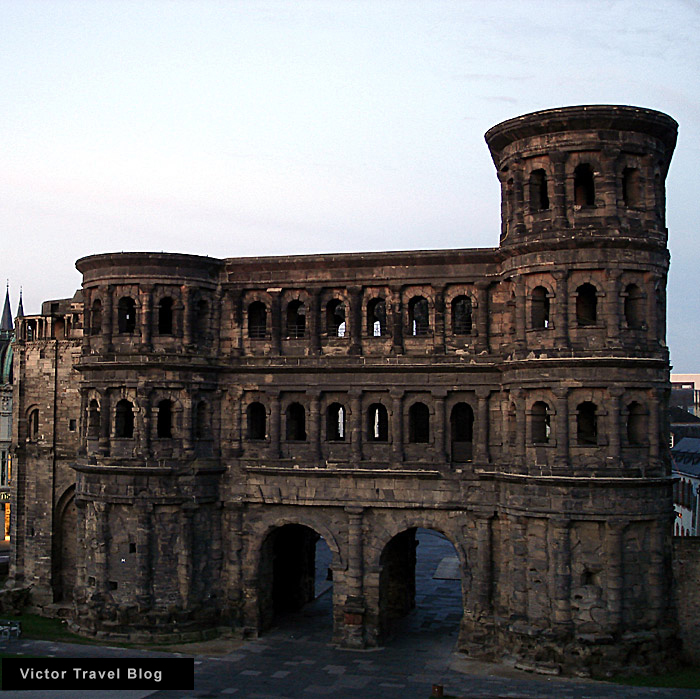 Once Porta Nigra was probably called differently as it were made of the naturally white stone, but in modern times the wind and the stormy weather did their dirty business, having thrown almost the completely black colour to Porta Nigra.

The width of the gate — 36 meters, the height — 30, and the depth — 21.5 meters. This is the biggest and the best preserved antique gate in the whole world, which are included into the UNESCO World Heritage List and symbolize the city of Trier, Germany.

Their initial purpose – the custom – was quite logical, as it was standing at the entrance to the city.

Symeon of Trier, a Greek hermit and a monk of the Egyptian Monastery of St. Catherine, who urged to immure himself alive up in the gates, began to live in Porta Nigra in 1028. Soon after his death in 1035 he was canonized, and Porta Nigra was rebuilt to the Church of St. Symeon in his honor. The Church existed almost 700 years and only in 1804 Emperor Napoleon ordered to remove all ecclesiastic accretions, and thus return to the initial Roman variant.

The Black gate is more than 1800 years old! The original (Roman) name of the gate was not kept, and the name Porta Nigra appeared in the Middle Ages. Nowadays Porta Nigra is the only remained fragment of the massive defensive complex of the city, in due time protecting the northern part of Trier, in addition there were also other gate in the west and south of the city, which did not survive through the long centuries.

Nowadays it is the very center of city, the spot where the pedestrian area of the historic part of Trier begins. There is a chain of cafes on the left hand from the entry to the city – you should definitely try some Rhenish or Moselle before going deep to the streets of the old city. You have a very long walk ahead of you – minimum a day-long.

Of course, Trier has a tiny old town with typical German houses and narrow streets. It is crowded with tourists during the day , but at night it is especially beautiful and mysterious. After Trier we go out for night photography in every city that we come.

Trier (lat. Augusta Treverorum) in times past was called “The Northern Rome” – it is the oldest city in Germany. The first settlement in here was established by the Emperor Augustus more than two thousand years ago.

Around 16 B.C. the Romans established the settlement of Augustus-Treverorum – “The Empire City of the Treveri” – in the place of the ruined settlement of the Celtic Treveri tribe. The Roman colony had got rich quickly, and one day it became the capital of the Northern part of the Roman Empire, which consolidated the lands of Gallia, Spain and Brittany. 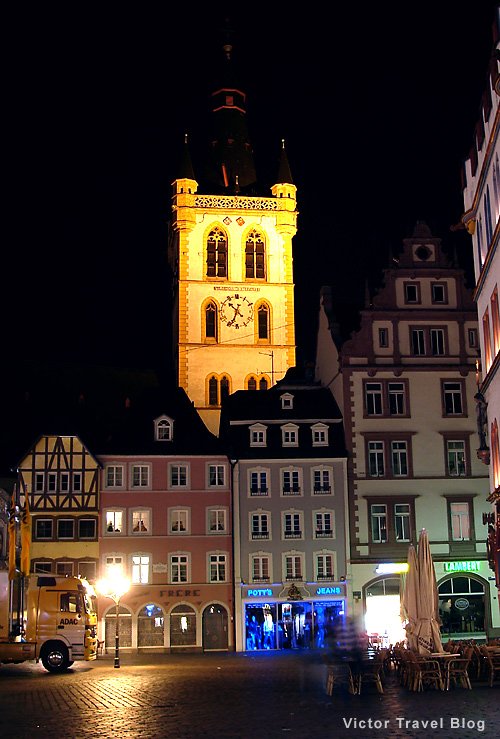 Trier has become the last and the biggest outpost of the Great Roman Empire on its northern boundaries. In IV century B.C. the city was threefold bigger than Cologne. As all other big Roman city, Trier had a forum and a fabulous amphitheatre. Nowadays Trier is much more smaller than Cologne, the amphitheatre is ruined, but two main sightseeing of the city are still preserved.

It has an ancient cathedral.

Trierer Dom was grounded in 320 at dictation of Emperor Constantine.

Trierer Dom is the oldest cathedral in Germany. Constantine’s mother – Saint Empress Elena contributed her part of the palace for the church. The sizes of the cathedral are 112.5 м x 41 м – and it is still the biggest among all Trier churches.

The interior of the Cathedral is unique, it combines the Romanesque, gothic and baroque elements. The gilding is not over measured, at the same time the giant columns are rising incredibly high. You clearly feel in the innocence and harmony inside the Cathedral. Maybe because the Trier Cathedral is a thesaurus of so many Christian shrined at once?

The mother of Emperor Constantine – St. Elena – carried the Holy Coat of Christ to the Cathedral in the IV century, which is now being kept in the crystal sarcophagus of the Trierer Dom. Once in several years thousands of palmers from the whole world gather to watch it on the Holy Friday.

There is a reliquary with the head of St. Elena in crypt and the sacristy keep such relics as a part of a chain, forged Paul the Apostle, a sandal and a nail of St. Andrew the First-called, and also the fragments of hallows of St. Joachim and Anne.

The Trier Cathedral was included into the UNESCO World Heritage List in 1986.

But the most surprising in Trier was waking up in the morning and seeing Porta Nigra in your window.

And then to have breakfast under their stern look.