We have a date with the Miracle. We are approaching after a long trip from St. Petersburg. This is Kizhi Island in remote Onega Lake. 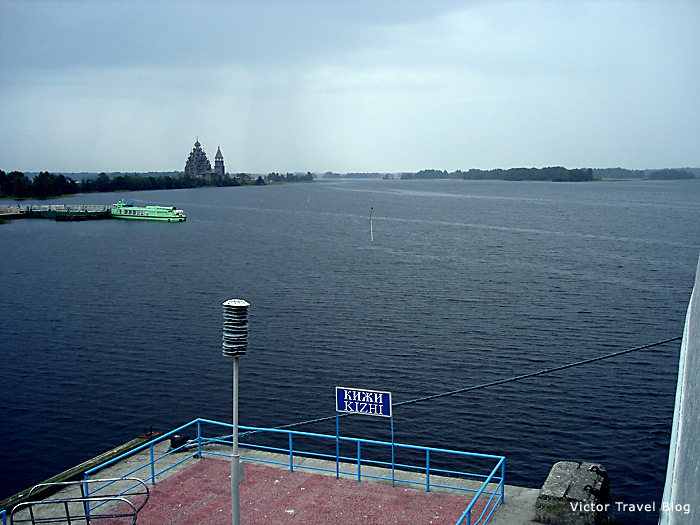 It is raining, sometimes heavily, but we are going to the Miracle..

The first archival records of a village with multiple-domed churches located on the Russian island called Kizhi date back to 1496. Since the 16th century, Kizhi has become a center of the whole region with a population of twelve thousand people. This is a huge number for this piece of northern earth isolated from the mainland.

Unfortunately, many of Kizhi’s churches did not survive until the present times. Near the end of the 17th century, a stroke of lightning resulted in a fire at the Pogost, which destroyed the majority of the churches. But in the 18th century, new churches were built on the sites of the burnt ones, and now some of them are known even outside Russia: the Church of the Transfiguration, the Church of the Intercession, and a bit later the Bell Tower of the Kizhi Pogost.

How many years have gone, but Kizhi still stands, though not without some restoration.

We are so close. I want to touch it, but it is not allowed. 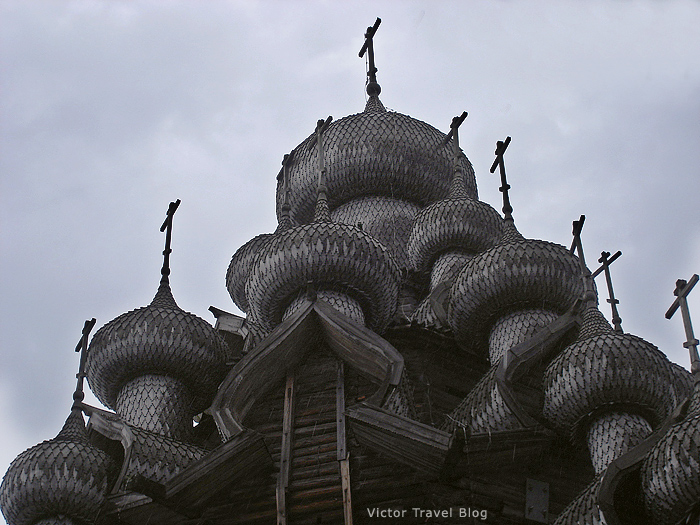 The Church of the Transfiguration of Our Lord on Kizhi Island

The Church of the Transfiguration of Our Lord was built for the second time in 1714 on public money. The real names of its creators are unknown. The legends say that Peter the Great himself was the author of the project. Sailing past the island, he saw men preparing to build a church, went ashore, and drew a plan of the future wooden miracle on the ground with his cane.

According to another legend, the Church of the Transfiguration was made by an unknown master named Nestor, who symbolically threw his axe into Onega Lake with the words, “There was, there is, but there won’t be such a beauty anywhere else.”

There are plenty of legends in these places. The natives believe the complex of churches of Kizhi is no more and no less than a model of the universe – that’s how the people implemented their idea of the world structure.

Some say that the longevity of the local churches in such severe northern conditions may stem from the fact that they were constructed without using a saw. Processing with an axe does not disrupt the structure of wood, and so the churches are not deteriorating in the course of time.

The Church of the Transfiguration of Our Lord (1714) is the most famous and outstanding construction of the whole ensemble. The Church of the Holy Virgin, built six years before that in the Vologda region, is widely thought to be its prototype.

These are the photos of the Church of the Holy Virgin with 24 domes, built in 1708. The photo taken in Vytegorsky District, Vologda Oblast, Russia.

The Church of the Transfiguration of Our Lord on Kizhi Island, was built according to the best Russian carpentry traditions—without a single nail. It is crowned with 22 domes, the form and the size of which gave an original shape to the look of the most famous Russian church.

Turn your attention to the domes. Seems like they are covered with fish scales, sparkling in the light of sunsets and dawns.

In fact the domes are covered by a sock. Sock – is a small tile with step-shaped edges, handmade from aspen. There are about 30 thousand of such socks in Kizhi. Can you imagine how much effort has been expended? 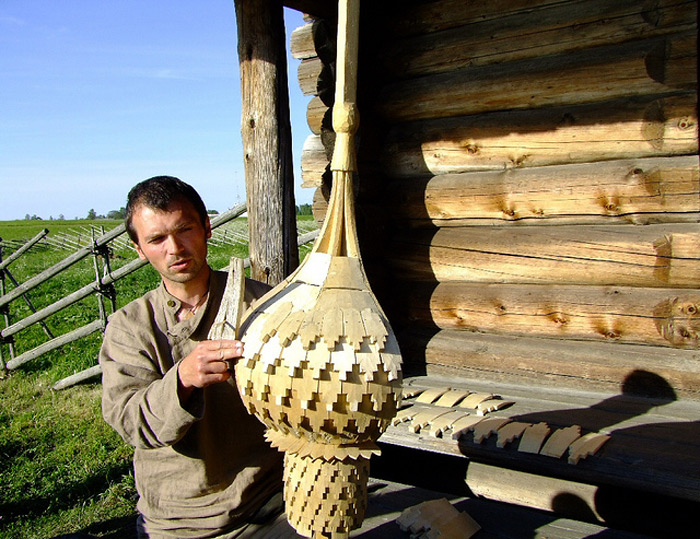 The Church of the Intercession

The Church of the Intercession is a «winter» church, which means it is heated. Church services are conducted here from October 1st until Easter, when the Church of the Transfiguration is closed.

Eight domes of the Church of the Intercession surround the ninth, central one. These domes are notable for their emphasis, sophisticated proportions. At the same time, they are modest and do not detract from the majesty of the main church of the Kizhi Pogost, the Church of the Transfiguration.

The Bell Tower of Kizhi

Kizhi is amazing in spring, when tremulous fresh grass appears near the Kizhi Pogost fence. Kizhi is gorgeous in summer, when the spicy smell of herbs and flowers envelops the ancient buildings. In fact, sunny summer lasts only for a few days here. In August, we were caught in the rain, but it did not prevent us from being impressed.

The Second World War passed Kizhi by, but time did not spare the churches. They began to sag and decay. That’s why they were closed in the 1980s, and are still under reconstruction, so it’s impossible to get inside. The government announced 2014 will be the year of the completion of works. Well, we’ll see. Maybe destiny will bring us there again, and we will be able to evaluate the whole magnificence of the ancient churches from the inside.

In 1990 UNESCO included the architectural complex of Kizhi Pogost in the World Cultural and Natural Heritage List. 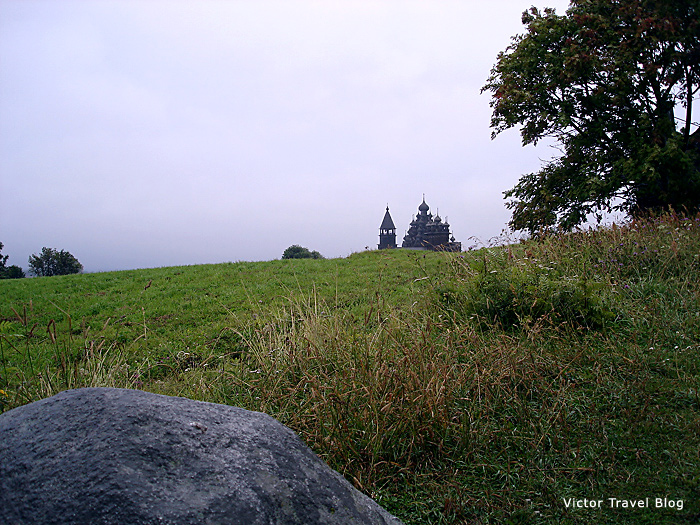 Around the main monastery of Kizhi, here and there are scattered all kinds of old buildings, cottages, barns, and mills. They work and, as it turned out, not only as a museum. 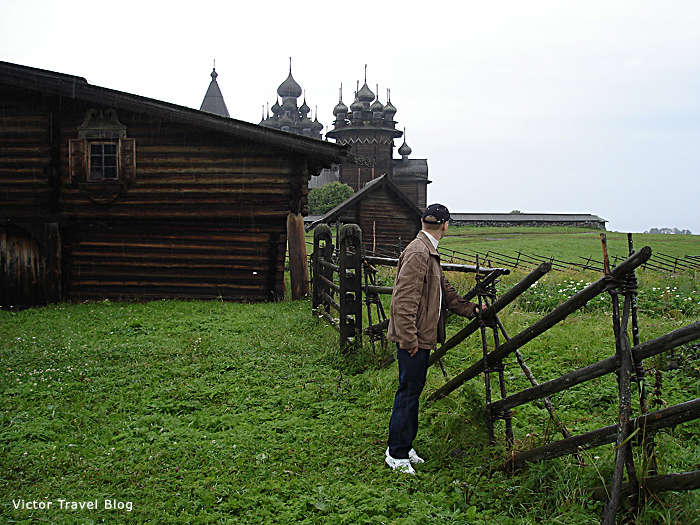 We were approached by a simply dressed, bareheaded girl and asked: What time is it?
She did not look like a tourist.

“What are you doing here in this rain?”
She tilted her head to one side and said, “I’m cutting the rye.”

And she said it with such a unique intonation…
I stopped, trying to grasp and remember the impression, the sound, the accent… Then she turned around and left.

Goodbye, Kizhi Island. Goodbye, Miracle.
I am glad we have met.

How Kizhi can be reached

Since May, it is possible to reach Kizhi via an organized shipboard excursion from St. Petersburg, and also via speedboat from the Petrozavodsk riverside station, every day at 13:00 and 18.00. The trip time is 1 hour 15 min. The speedboat departs Kizhi island every day at 15.30 and 20.30.

It is hard to get here in winter, but still you may use a helicopter or a dogsled. 🙂

However, the fact remains – Kizhi is extremely beautiful at any time of the year!

We thank
The Kizhi Museum (in English)
ETK ENERGY
for assisting in the organization of this trip.

Unique Abandoned Russian Church in Yaropolec
Abandoned Estate, Bazhenov’s Church, and Abandoned Aircraft: All in One Place
The same face

15 thoughts on “Kizhi Island. The Church Built Without a Single Nail 300 Years Ago!”